Cocky car thieves take father’s BMW for SECOND time in one week despite him blocking it in on driveway with metal gate, bins and another vehicle

CCTV shows the moment cocky car thieves steal the same BMW for the second time in one week, despite it being blocked in by a metal gate and another car.

The white One Series car was taken from outside a house in Dovecot, Liverpool, in the early hours of Tuesday having already been stolen exactly seven days before.

Thieves managed to break into the house where the car was parked on Tuesday, July 9 and steal the keys before making off with the vehicle.

They left the rest of the house untouched. Police managed to track the vehicle and return it to its owner, who asked not to be identified.

The owner had blocked his white BMW One Series in with a pair of bins and another car. But despite this, the ‘professional’ thieves were able to bypass the measures in seconds

He said: ‘We got the car back at the weekend, but the number plates had been taken off, so I parked it in the driveway and attempted to block it in so no-one could get near it.’

The young father parked the car before covering it in tarpaulin, closing a set of gates in front of it and putting two wheelie bins in front of it. He also parked a second car across the driveway.

But, unfortunately, the determined thugs, who still had the keys from the first burglary, managed to bypass these security measures in less than 40 seconds.

CCTV footage of the theft shows two men approach the car, as a vehicle pulls alongside them in the street. One of the thieves moves the wheelie bins out of the way while the other enters the car with the key they stole a week earlier.

As the gates are opened, the vehicle that arrived with the thieves can be seen reversing up onto the kerb outside the house before ramming into the blocking car which was parked across the driveway.

It is then forced backwards and out of the way of the BMW before the men drive off from the scene. 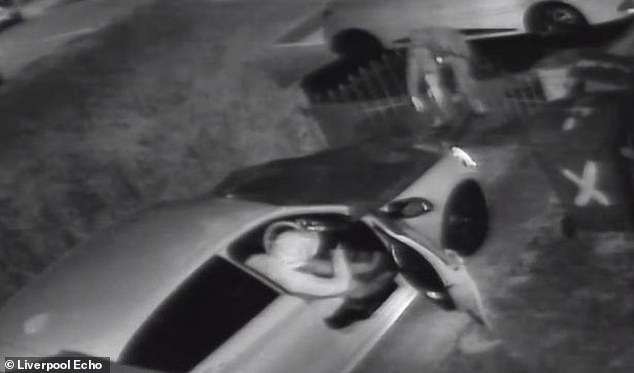 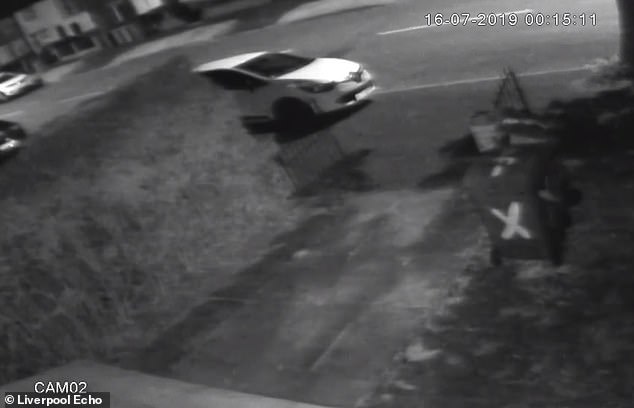 After noticing the car was gone the next morning, the victim checked the CCTV straight away.

He said: ‘I couldn’t believe they had come back for it already.

‘I had been looking into getting an immobiliser for it, but it’s only been a couple of days, and I haven’t had a chance to get it sorted.

‘I don’t even want the car back now, they are clearly professionals and the safety of the people in this house is more important than any car.’

Police are now appealing to the public for help in finding the car and the men who stole it.

A Mersey Police spokesman said: ‘We are appealing for information after a car was stolen from a driveway in the early hours of Tuesday.

‘A report was received that a white BMW 135i was taken from the driveway on Finch Lane at around 0.15am.