Boy, 16, will never walk again after breaking his neck performing a simple bike trick he had done ‘hundreds of times’ before

A 16-year-old boy has been paralysed after he broke his neck during a bike stunt gone wrong – and only has a one per cent chance of being able to use a wheelchair.

Perth teen Cody Mackie was on a school holiday bike ride in the suburb of Bindoon two weeks ago when a simple jump he had done hundreds of times before ended with him landing on his head.

Cody was wearing a helmet and protective pads when the ‘freak’ accident occurred.

Cody Mackie, 16, broke his neck when a simple jump he had done hundreds of times before ended with him landing on his head

Emergency services airlifted the paralysed teen more than 75 kilometres to Royal Perth Hospital where surgeons worked through the night to correct his broken neck.

Cody was put on a ventilator after he had difficulty breathing and has been in the hospital’s intensive care unit since the accident on April 20.

Doctors said Cody is unlikely to walk again and have given him a one per cent chance that he will be able to use a wheelchair.

His father, Rob Mackie, said the family are still are in disbelief.

‘Everyone’s devastated because Cody’s such a good kid. Everyone loves him,’ Mr Mackie, said.

The teen’s mother Danae Mackie and good friend Kitty Ferguson, set up a GoFundMe page to assist them with ongoing medical treatment and future disability care and equipment.

‘Cody will need extensive ongoing medical care, modifications to his home once he is able to return, modified transport to include any medical equipment,’ Ms Ferguson wrote. 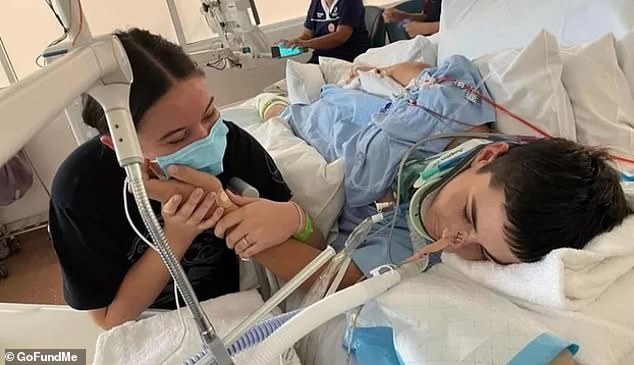 Doctors had to perform a tracheotomy to allow Cody to speak – however due to his extensive injuries he is still unable to talk.

The family said Cody has a long road to recovery after the injuries to his neck damaged his spinal cord but are holding on to the one per cent chance that he will regain movement.

‘This 1% will be our fighting hope for him to regain something in due course,’ Ms Ferguson wrote.

‘We want to give Cody the best chance for his long road to recovery whatever that may involve and we want to be able to support his family without any further stresses or worries.’