Cody Simpson is DISQUALIFIED at national championships after Kyle Chalmers

Celebrity swimmer Cody Simpson has been disqualified from the 100 metres freestyle at the national championships during a week full of drama for the pop star.

Simpson has impressed mightily since returning to the pool as he chases his dream of competing against the world’s best but he false-started in his heat on Saturday morning.

He’d previously thought he was a shoo-in to represent Australia in the 100 metres butterfly at the world championships until Thursday night, when Kyle Chalmers changed his mind about sitting out the event.

Many suspected a love triangle could be part of the motivation for the about-face, as Simpson is now going out with Chalmers’ ex-girlfriend, pool queen Emma McKeon. 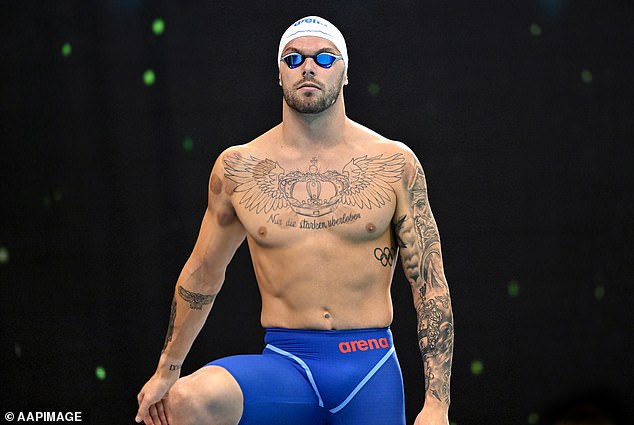 Kyle Chalmers was accused of being motivated by a love triangle when he backflipped and decided to race in the 100m butterfly at the world championships, costing Simpson a spot

However, Simpson told the Amazon Prime Video commentary team on Friday that he and Chalmers have spoken and ‘cleared the air’.

His comments came after Chalmers took to Instagram slamming media reports about his decision and calling the situation a ‘nightmare’.

Simpson is a likely selection in the 100m butterfly for the Commonwealth Games in July-August after finishing third in the ‘fly final on Thursday night.

While freestyle isn’t his favoured stroke, he lined up in a heat including pacesetter William Yang on Saturday morning.

With Olympic 100m freestyle gold and silver medallist Kyle Chalmers not racing the event at the nationals, Yang and emerging 16-year-old Flynn Southam were fastest through the heats. 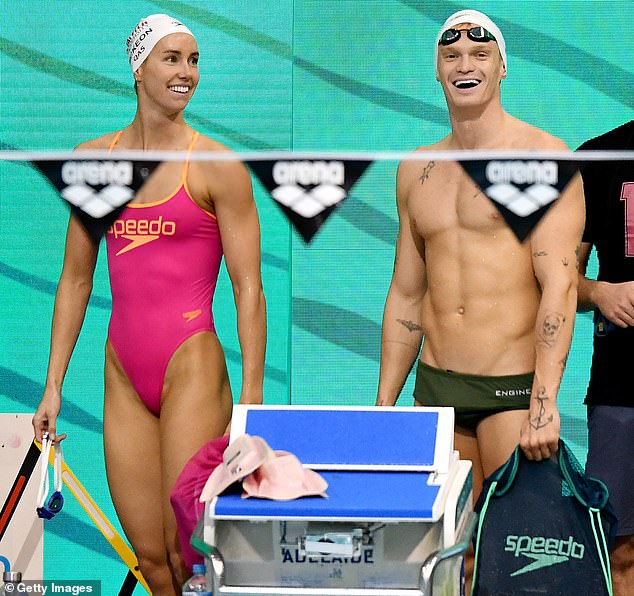 Simpson is reportedly ‘smitten’ with Emma McKeon (pictured together). Her ex-boyfriend, Chalmers, has angrily denied their romance had anything to do with his butterfly backflip

Yang and Southam clocked 48.62 seconds in separate heats with Jack Cartwright (48.66) next best.

Meanwhile, McKeown barely exerted herself while topping qualifying in the 200m backstroke.

McKeown breezed through her morning heat in Adelaide, which followed her 100m backstroke victory on Friday night.

The Olympic champion in both events, McKeown swam well within herself in her 200m backstroke heat and clocked two minutes 11.57 seconds.

The time was more than seven seconds slower than her Commonwealth record in the event set at last year’s Olympic trials.

In the men’s 400m individual medley, Commonwealth record-holder Brendon Smith was the quickest through the heats.