LOS ANGELES (AP) – It’s fair to say that a lot of people awoke Friday to a headline that might have jolted them more awake than a morning cup of joe: A California judge had ruled that coffee sold in the state should carry a cancer warning.

Here are some things to know about the ruling and how it might affect you:

WHAT’S THE BEEF WITH COFFEE?

FILE – In this Sept. 22, 2017, file photo, a barista pours steamed milk in a coffee at a cafe in Los Angeles. Superior Court Judge Elihu Berle has ruled that California law requires coffee companies to carry an ominous cancer warning label because of a chemical produced in the roasting process. Judge Berle wrote in a proposed ruling Wednesday, March 28, 2018, that Starbucks and other coffee companies failed to show that the threat from a chemical compound produced in the roasting process was insignificant. At the center of the dispute is acrylamide, a carcinogen found in many cooked foods, that is produced during the roasting process. (AP Photo/Richard Vogel, File)

Like many foods that are cooked, coffee-roasting creates a chemical byproduct called acrylamide that is a carcinogen.

The Council for Education and Research on Toxics, a small nonprofit, took the coffee industry to court under a California law that requires warnings where chemicals known to cause cancer or birth defects are present.

Coffee companies, led by Starbucks Corp., acknowledge the presence of the chemical, but said it’s found in trace levels that are harmless. They argue any risks are outweighed by other health benefits from drinking the beverage.

While scientists have gone back and forth for years on benefits or risks from coffee, concerns have eased recently and some studies have found health benefits and even lower risks of getting certain cancer types.

But a Los Angeles Superior Court judge said Big Coffee had failed to prove their case.

HAVE I SEEN THIS MOVIE BEFORE?

The same group took potato chip makers to court in California years ago because acrylamide is present in fried potatoes. Under a settlement, the industry agreed to remove the chemical from chips.

Attorney Raphael Metzger, who represents the nonprofit, said if chip makers could do it, so can coffee roasters. That is his ultimate goal.

But coffee companies have said it’s not feasible to remove acrylamide without ruining coffee’s flavor.

In addition to posting warnings, coffee companies could face some civil penalties of up $2,500 for each person in California exposed daily over eight years.

“The judge could impose crippling penalties which is all the more reason why it would behoove these companies to settle the case,” Metzger said Friday.

WHEN WILL I START SEEING SCARY CANCER WARNING LABELS?

Anyone living or visiting California may have noticed signs warning about cancer risks at gas stations, hardware stores, cafes and even Disneyland.

The law was passed by voters more than 30 years ago and the signs are so ubiquitous and often vaguely worded that most people pay little heed. For example, parking garages caution: “This area contains chemicals known to the state of California to cause cancer, birth defects and other reproductive harm.”

“The breadth of the statute requires a proliferation of warning that results in the public not being warned because there are so many without specificity that they’re essentially broadly disregarded,” said attorney Jim Colopy, who has defended manufacturers and distributors in similar lawsuits.

After the lawsuit was brought, many coffee shops began posting warnings that specifically say California has determined acrylamide is among chemicals that cause cancer or reproductive toxicity.

The signs also say that cancer risk is influenced by a variety of factors and that the Food and Drug Administration has not advised people to stop drinking coffee or eating baked goods that contain acrylamide.

Many of the signs that are posted, however, are in places not easily visible, such as below the counter where cream and sugar is available.

The ruling could result in signs being placed at counters where customers see them before making a purchase and will require warnings on packaging of ground coffee and bags of roasted beans.

IS SOME WACKY CALIFORNIA LAW GOING TO KILL MY MORNING BUZZ?

The law only applies to California, but the state is such a massive market that tailoring packaging with warnings specifically to stores in the state could be a tall order.

Colopy said it’s not feasible for his clients who market products nationally and worldwide to create California-only packaging.

“Often industry has no choice but to provide a warning no matter where they are sold, whether inside or outside of California,” he said.

So, the short answer is maybe.

Supporters of the law would argue broader awareness is not such a bad thing. 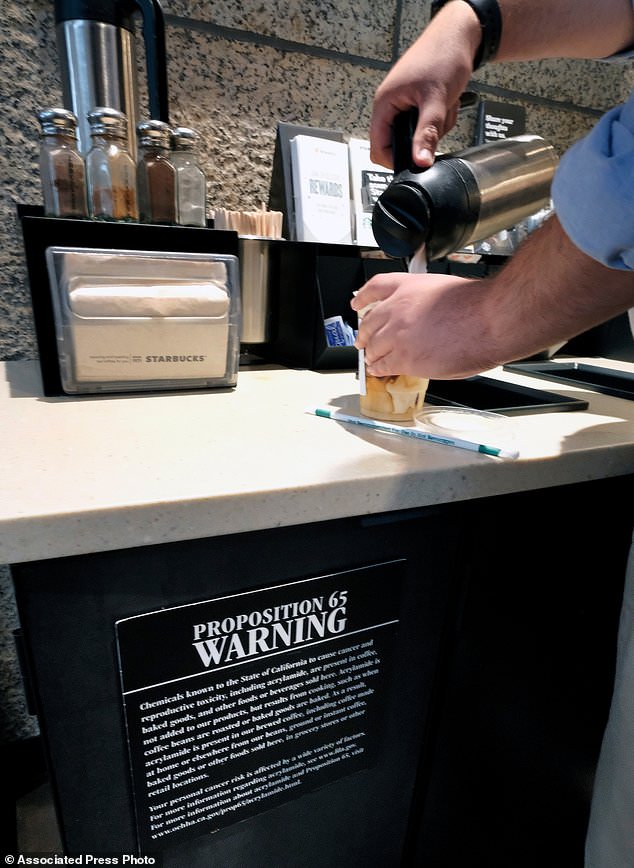 FILE -In In this Sept. 22, 2017, file photo, a customer pours milk into coffee near a posted Proposition 65 warning sign at a Starbucks coffee shop in Los Angeles. Superior Court Judge Elihu Berle has ruled that California law requires coffee companies to carry an ominous cancer warning label because of a chemical produced in the roasting process. Judge Berle wrote in a proposed ruling Wednesday, March 28, 2018, that Starbucks and other coffee companies failed to show that the threat from a chemical compound produced in the roasting process was insignificant. At the center of the dispute is acrylamide, a carcinogen found in many cooked foods, that is produced during the roasting process. (AP Photo/Richard Vogel)