Michael Cohen included information in his congressional testimony where he says he ‘threatened’ then-candidate Donald Trump’s schools to keep them from allowing his high school and college grades to be revealed.

Cohen made a point of including the documents to accompany testimony, where he said Trump was a ‘conman’ and a ‘racist’ – and noted that Trump had demanded that President Obama release his own grades after stoking a conspiracy theory that Obama wasn’t born in the U.S.

Cohen told the House Oversight Committee he was furnishing ‘copies of letters I wrote at Mr. Trump’s direction that threatened his high school, colleges, and the College Board not to release his grades or SAT scores.’

‘Donald Trump is a man who ran for office to make his brand great, not to make our country great,’ Michael Cohen will testify

The claim was revealed in Cohen’s advanced testimony, which also contained bombshell revelations about WikiLeaks and a planned Trump tower project in Moscow.

Cohen wrote: ‘When I say conman, I’m talking about a man who declares himself brilliant but directed me to threaten his high school, his colleges, and the College Board to never release his grades or SAT scores.’

‘As I mentioned, I’m giving the Committee today copies of a letter I sent at Mr. Trump’s direction threatening these schools with civil and criminal actions if Mr. Trump’s grades or SAT scores were ever disclosed without his permission,’ the recently-disbarred lawyer continued.

‘The irony wasn’t lost on me at the time that Mr. Trump in 2011 had strongly criticized President Obama for not releasing his grades. As you can see in Exhibit 7, Mr. Trump declared ‘Let him show his records’ after calling President Obama ‘a terrible student.’ 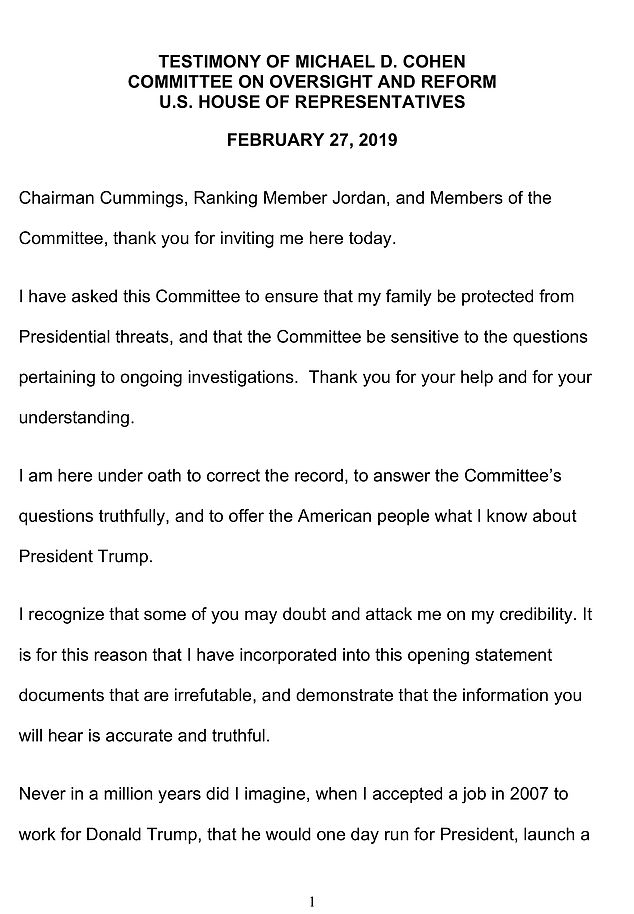 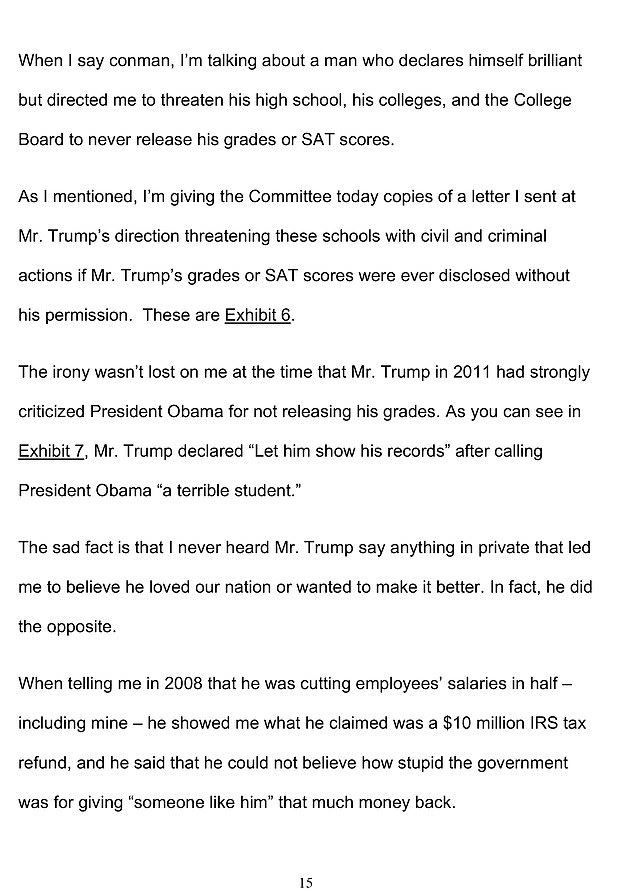 Trump during the campaign called himself a ‘very smart guy’ and even touted ‘like, super genius stuff.’

But according to Cohen, the candidate was determined not to allow the release of his grades.

According to the Boston Globe, which interviewed former classmates, Trump ‘rarely shined in class.’

Trump transferred to the school after spending two years at Fordham University, having obtained military deferments from Vietnam.

Cohen also took aim at Trump’s avoidance of military service – and made the point as the president was meeting with the president and prime minister of Vietnam at summit meetings.

‘During the campaign, Mr. Trump said he did not consider Vietnam Veteran, and Prisoner of War, Senator John McCain to be ‘a hero’ because he likes people who weren’t captured,’ Cohen was to testify.

‘At the same time, Mr. Trump tasked me to handle the negative press surrounding his medical deferment from the Vietnam draft. Mr. Trump claimed it was because of a bone spur, but when I asked for medical records, he gave me none and said there was no surgery,’ according to his former fixer, who Trump now brands a liar.

‘He told me not to answer the specific questions by reporters but rather offer simply the fact that he received a medical deferment. He finished the conversation with the following comment. ‘You think I’m stupid, I wasn’t going to Vietnam.’

Cohen was to include the letter as an exhibit to be shared with the committee.