Locals hit by the glacier flood disaster in India this month which killed up to 200 people believe a nuclear device placed in the Himalayas by US Cold War spies caused the deluge.

Part of a glacier and a large chunk of rock face broke off in the mountains of Uttarakhand, jamming a river before the mass of backed-up water broke through, causing mass devastation.

The deluge of water, rocks and soil hurtled down a V-shaped valley, sweeping away homes, roads and bridges as well as around 200 people, many of whom have still not been found almost two weeks on.

In the farming mountain village of Raini, residents believe that nuclear devices which may have been hidden under the rocks for decades could have caused the devastation by melting the snow.

Sangram Singh Rawat, the headman of Raini, told the BBC: ‘We think that the devices could have played a role. How can a glacier simply break off in winter? We think the government should investigate and find the devices.’

In the 1960s, the US collaborated with India to place monitoring devices in the mountain range to spy on Chinese missile tests.

It came during the height of paranoia in the Cold War when China detonated its first nuclear device in 1964.

In October 1965, US and Indian climbers carried seven plutonium capsules and surveillance equipment up Nanda Devi, the second highest mountain in India standing at 25,643ft. 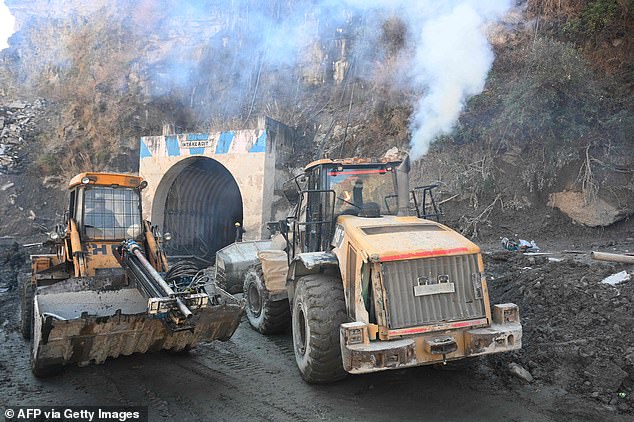 Part of a glacier in the village of Raini in the state of Uttarakhand broke off, sending a flood downriver which smashed into bridges and trapped workers in tunnels

The mission, carried out by the CIA in conjunction with India’s Intelligence Bureau, intended to place a relay listening device on the summit of the mountain which sits on the border with China.

During the ascent, a blizzard forced the climbers to retreat and they left behind the devices on a platform on the mountain.

The equipment left on Nanda Devi consisted of a six-foot-long antenna, two radio communication sets, a power pack and the seven plutonium capsules.

The luggage weighed around 57kgs and the climbers decided to abandon the climb and leave behind the devices during their bid for safety.

But the following spring, the climbers returned to the mountain to lug it to the summit but they could not find the devices anywhere. 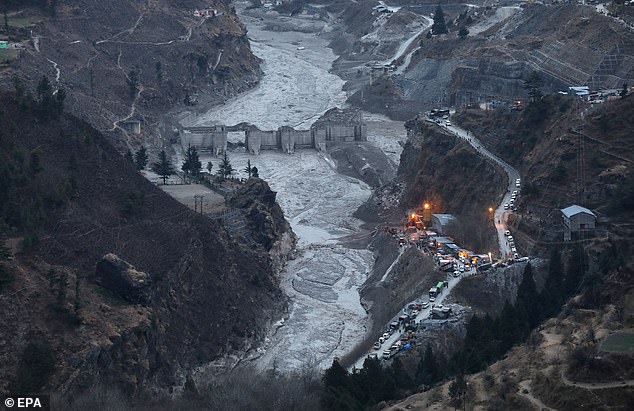 None of the equipment has since been found despite a number of search missions in subsequent years.

Nanda Devi was even closed off to foreign expeditions until 1974 over fears the spy equipment would be found and used.

Manmohan Singh Kohli, a climber who led the expedition for the Indian team, said the plutonium stock was ‘about half the size of the atomic bomb dropped on Hiroshima’.

Pu-239 is the main isotope used in nuclear weapons. 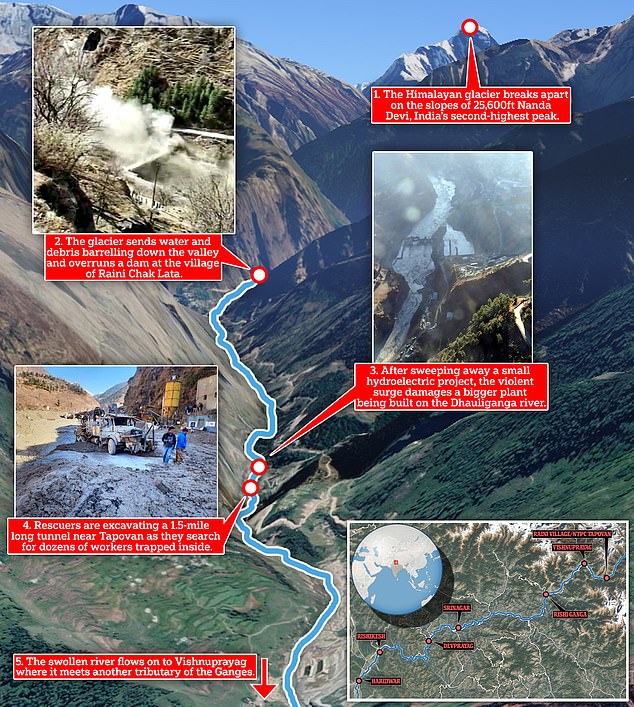 This diagram shows how the floodwaters which were triggered by a glacier collapse came crashing down a valley in northern India, overrunning a dam before crashing into hydroelectric energy projects and leaving some of their workers trapped

The rods would power a generator known as SNAP, a System for Nuclear Auxiliary Power, to collect the data on Chinese missile launches.

Once activated, it would convert the radioactive heat energy into electricity to power the listening device and its antenna.

In 1967, a third mission saw climbers place a new set of devices on the adjacent 22,510ft mountain Nanda Kot.

It proved successful but then suddenly stopped sending signals, prompting another climb to retrieve the device.

The mountaineers found that its heat had caused it to slowly melt 8ft into the face of the mountain, and they promptly took the device away.

Locals believe this shows the device which could still be up in the mountain is eating away into the snow, causing the latest glacier flood.

Scientists have examined the sand and waters in the area in recent years with some claiming to have found evidence of plutonium similar to the stock placed in the generator. 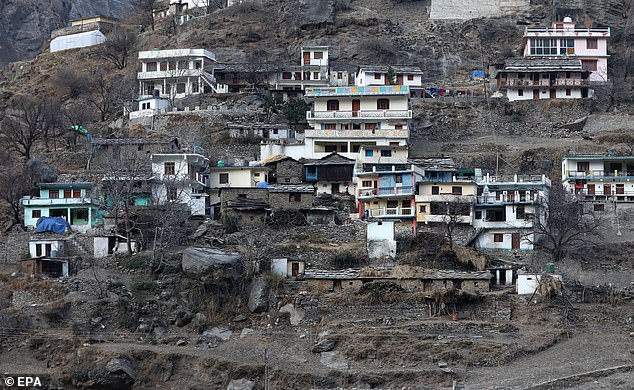 Pictured: Houses near the Dhauliganga hydro power project. One of the rescue efforts is focused on a tunnel at a hydroelectric power plant where more than three dozen workers have been out of contact since the flood occurred Sunday

US news outlet Outside reported: ‘Until the plutonium [the source of the radio-activity in the power pack] deteriorates, which may take centuries, the device will remain a radioactive menace that could leak into the Himalayan snow and infiltrate the Indian river system through the headwaters of the Ganges.’

Others believe the recent flood may have been caused by climate change, with 10,000 glaciers receding at a rate of 100 to 200 ft per decade in the Indian Himalayas.

Workers have also been carrying out construction in the area to build new highways and hydroelectric plants, which may have disturbed the glacier.

Captain Kohli said he cannot rule out the nuclear theory but believes the device is ‘very unlikely to emanate heat or blow itself up’.

But Rawat told the Times of India: ‘If the device is buried under the snow somewhere in the area and is radiating heat, then of course there would be more melting of snow and further avalanches.’