Coldest Macy’s Thanksgiving parade EVER gets underway in NYC

New Yorkers bundled up as they watched iconic floats and performances in Thursday’s Macy’s Thanksgiving Parade – proving that the cold never bothered them anyway.

Millions cozied up as they watched fantastic musical numbers kick off the parade as it made its way through Manhattan’s streets.

The parade features 16 massive balloons and 26 large floats. It also includes a dozen marching bands and more than 20 music acts.

Tom Turkey – which kicked off the parade in Midtown – was actually built around a Toyota Ram truck this year for the first time. It is usually pulled by willing participants and was introduced into the parade in 1971. 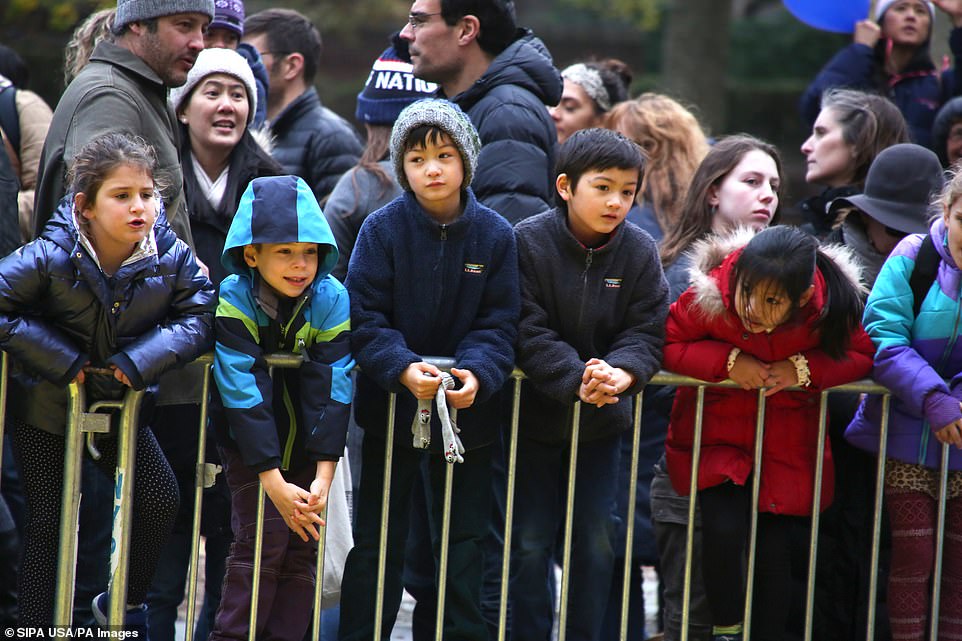 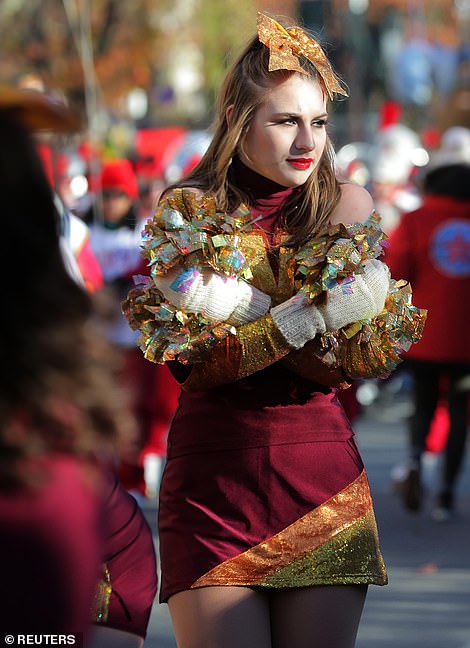 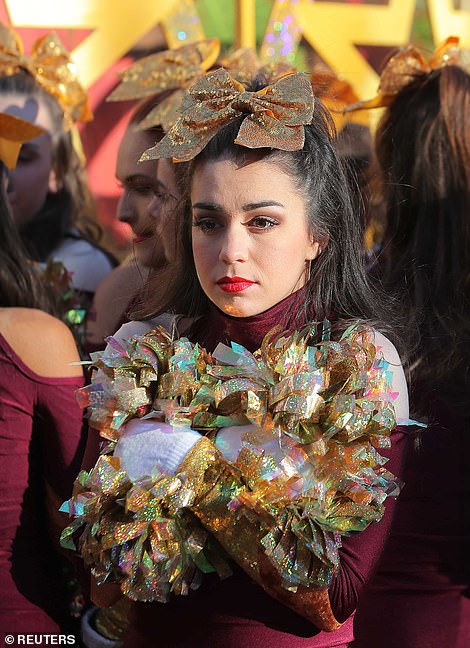 Thursday’s forecast showed a high of 27 degrees and lows of 19 degrees, with winds blowing up to 25mph and gusts up to 30mph, marking New York City’s coldest Thanksgiving in over a century 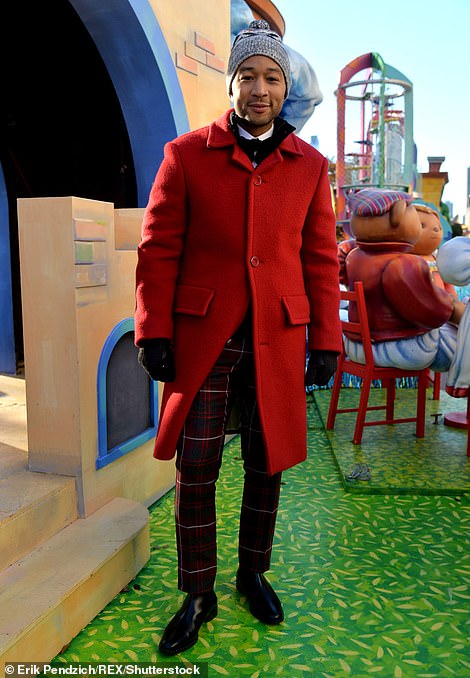 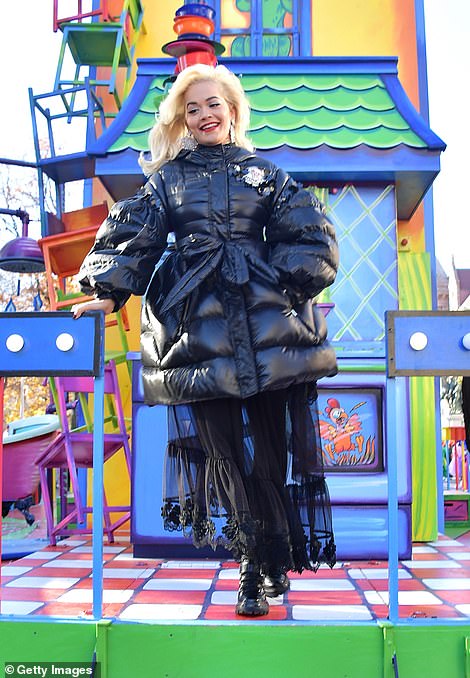 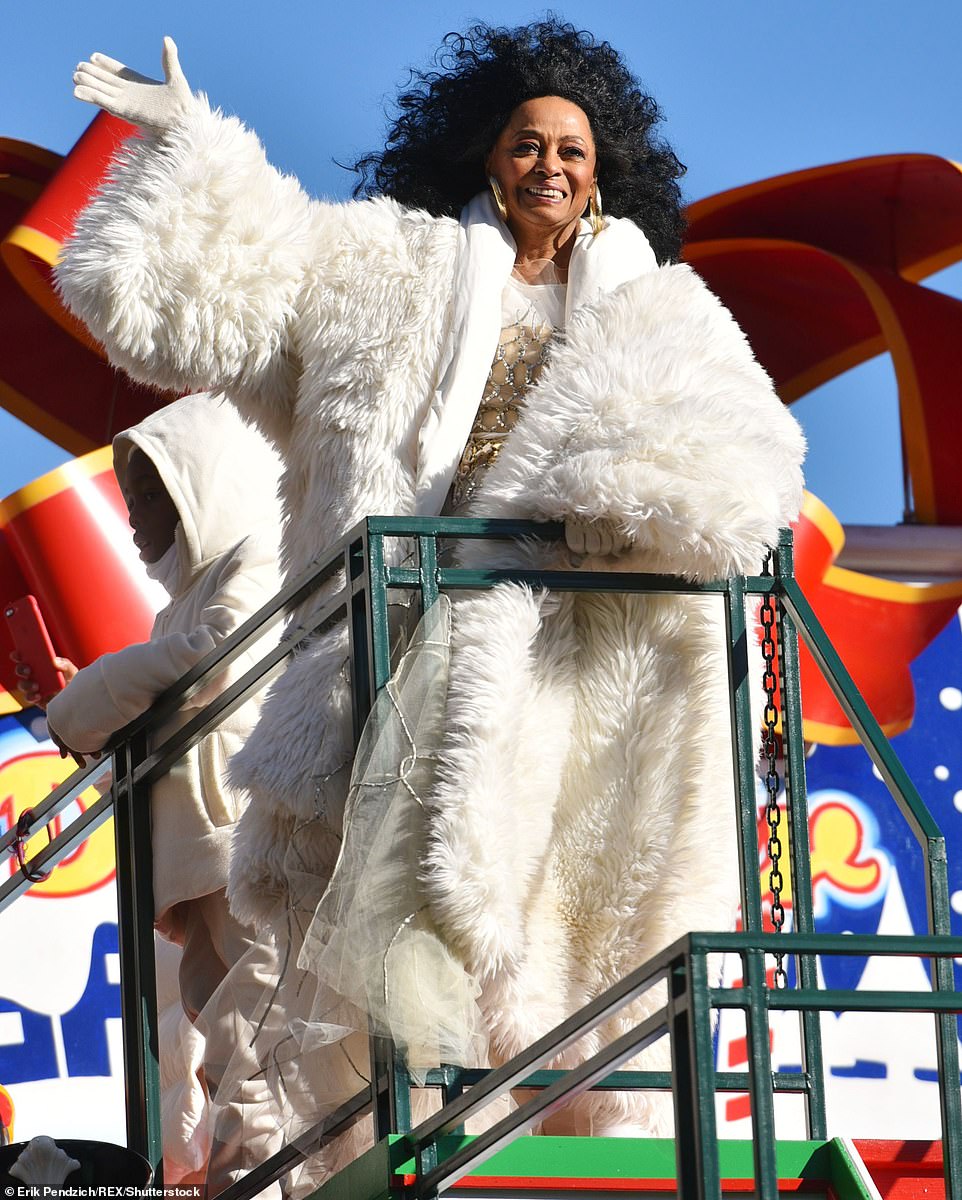 Thursday’s forecast showed a high of 27 degrees and lows of 19degrees, with winds blowing up to 25mph and gusts up to 30mph, marking New York City’s coldest Thanksgiving in over a century.

The last time Turkey day was this cold was more than a century ago on November 28, 1901, when temperatures were a freezing 26 degrees, according to ABC7’s Accuweather-Alert. . Temperatures in 1871 were as low as 15 degrees with a high of 22.

The NYPD also said that they were prepared to order the massive helium-filled balloons to a lower altitude or removed if winds exceed 23mph, which they are expected to. 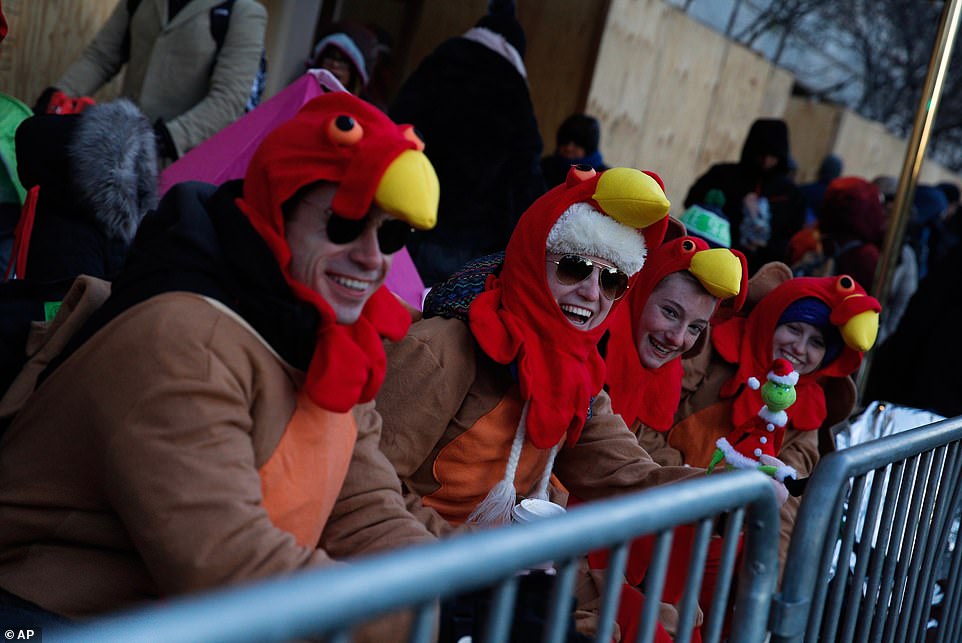 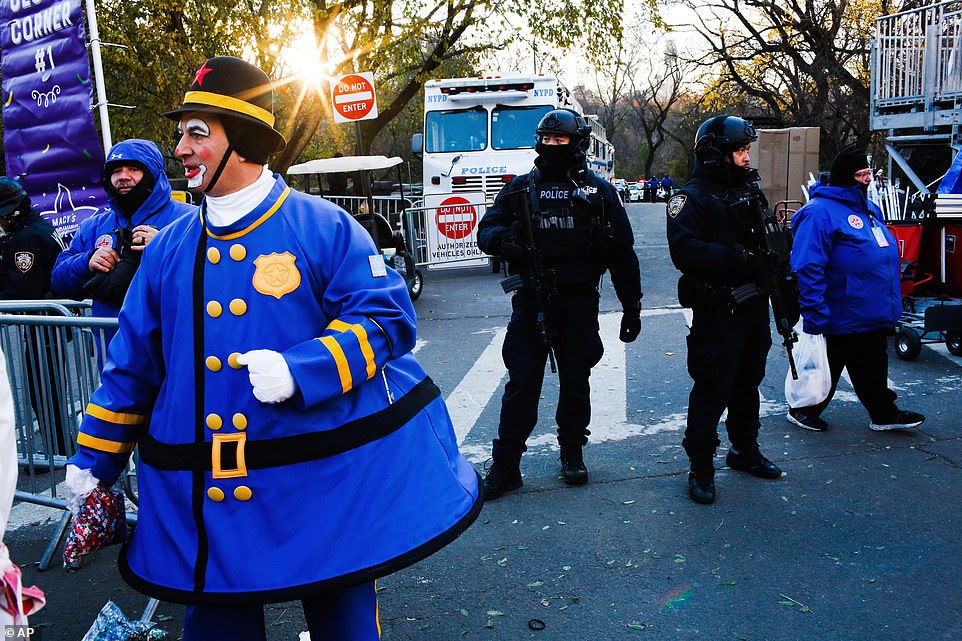 You have the right to remain happy! A fun clown police officer poses in front of actual policeman at the parade 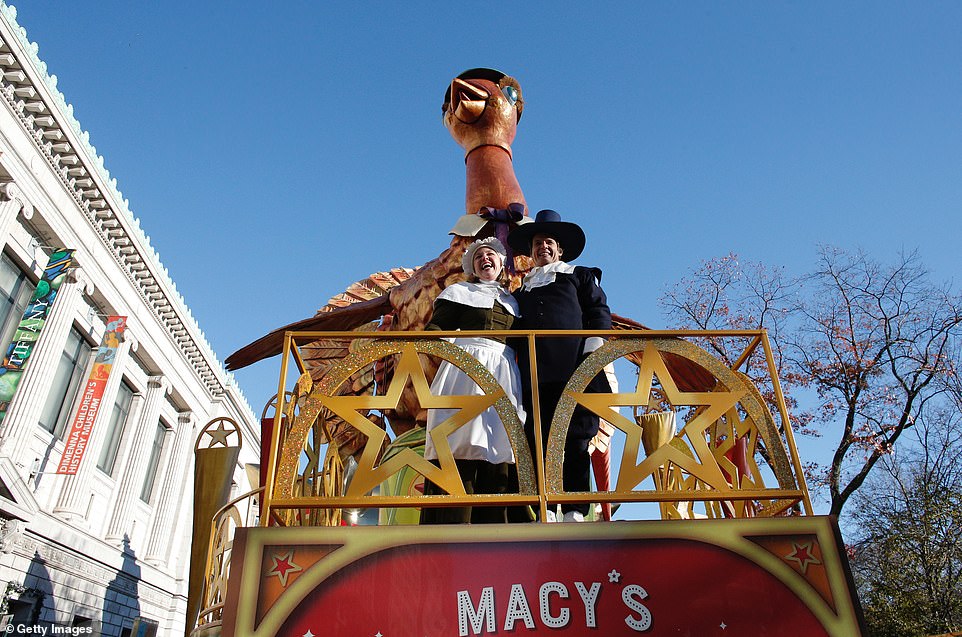 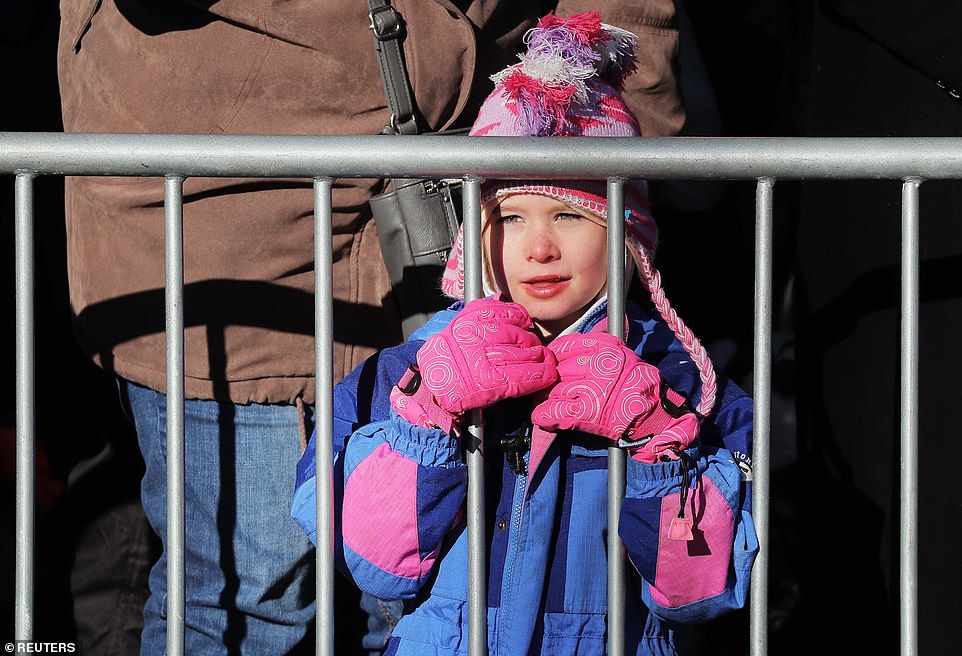 ‘If we have to call an audible on the day of, and make an adjustment, we’ll do so,’ Chief of Patrol Rodney Harrison said at a Wednesday press conference. ‘Thirty-four mile per hour wind gusts is when we say, “OK, we gotta bring it all the way down to the ground.”‘

Following an increase in high profile domestic terrorist attacks last year, the parade beefed up security to ensure that everyone could enjoy the festivities.

This year was no different as officers walked with loaded weapons and guard dogs as they patrolled the city. 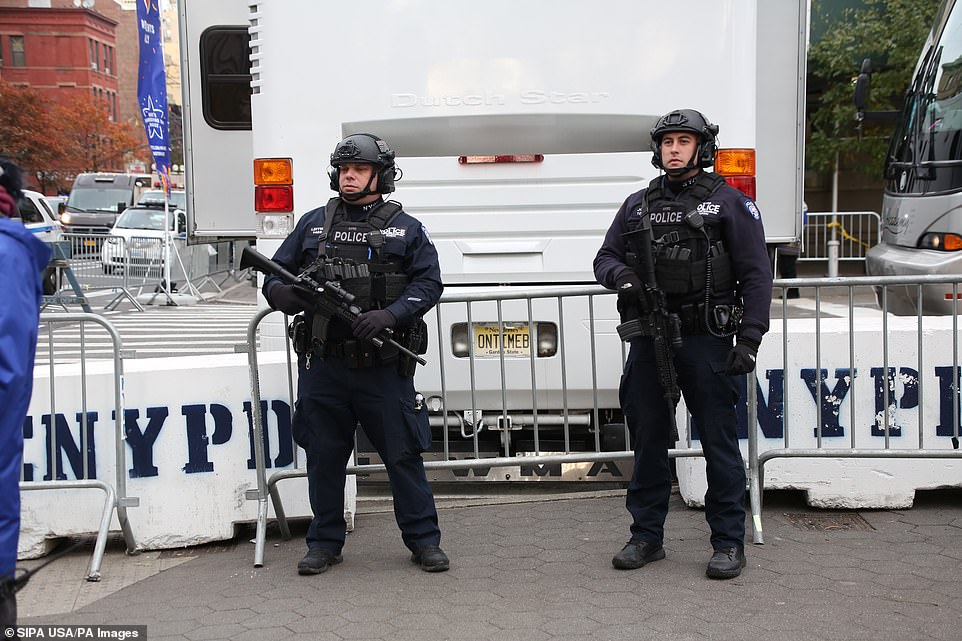 Following an increase in high profile domestic terrorist attacks last year, the parade beefed up security to ensure that everyone could have a blast during the festivities 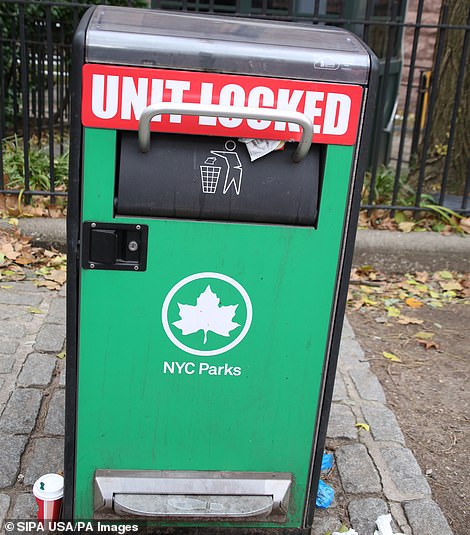 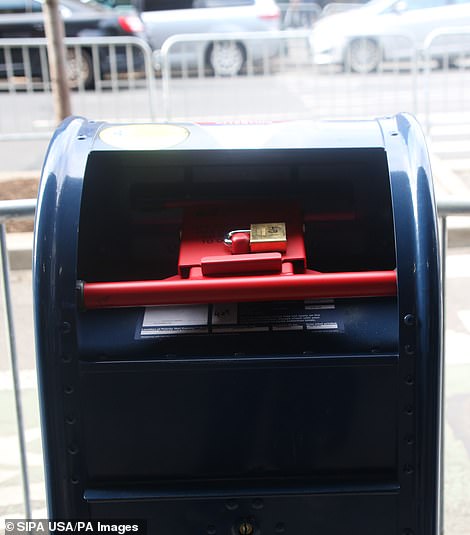 Throughout New York City, security bars could be seen blocking access to mailboxes and trash disposals in an effort to curb any possible bombs 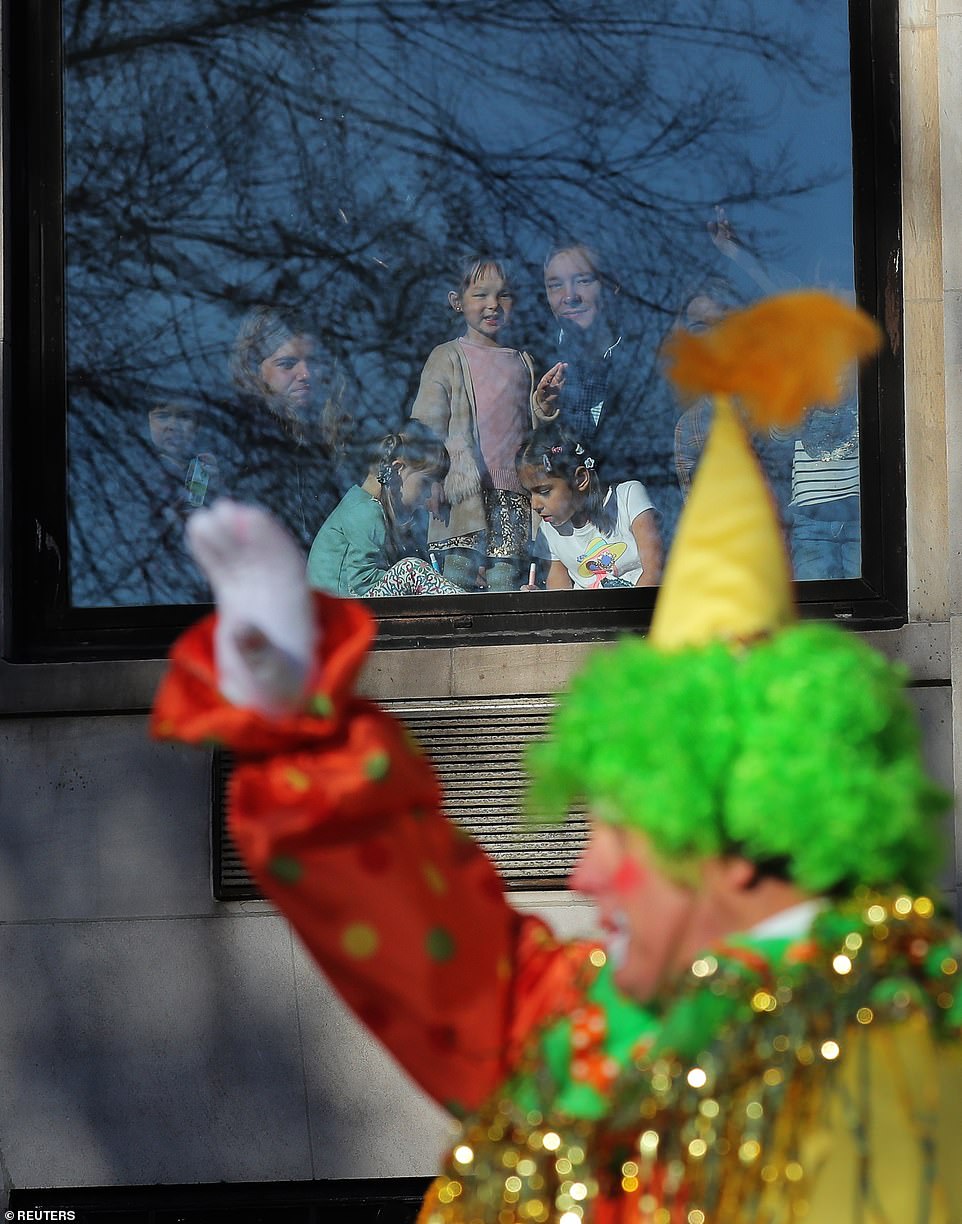 Staying warm: Some families enjoyed the parade from the comfort of their own homes and the heat 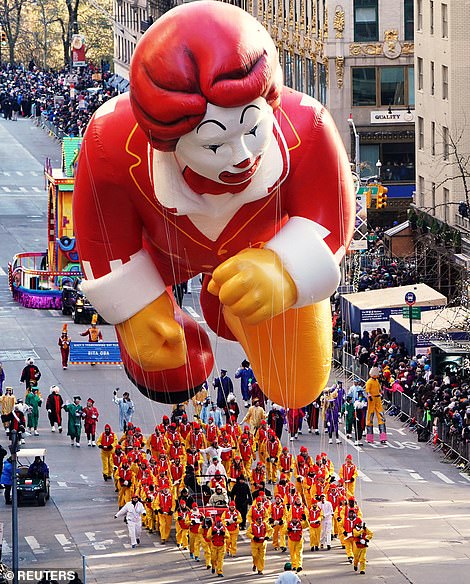 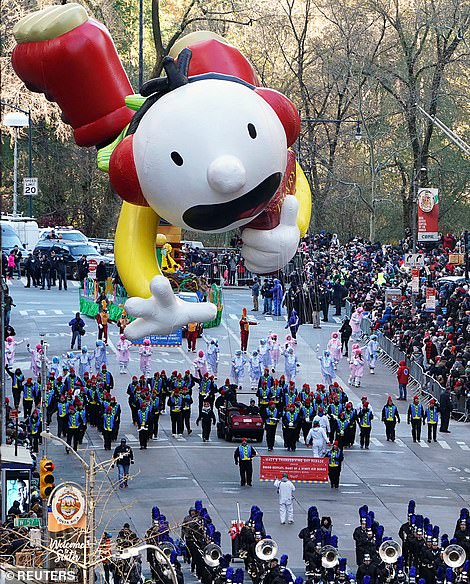 Throughout New York City, security bars could be seen blocking access to mailboxes and trash disposals in an effort to curb any possible bombs.

K-9 units could be seen throughout the city and were capable of sniffing out potential trouble from up to a few hundred feet away.

The parade began at 9am on Thursday, with marching bands, performers from Broadway hits, elaborate floats and signature giant balloons.

Chase from Paw Patrol made his second trip – along with Jett from Super Wings and Olaf from Frozen – to the parade as one of the massive floats that dazzled the city. 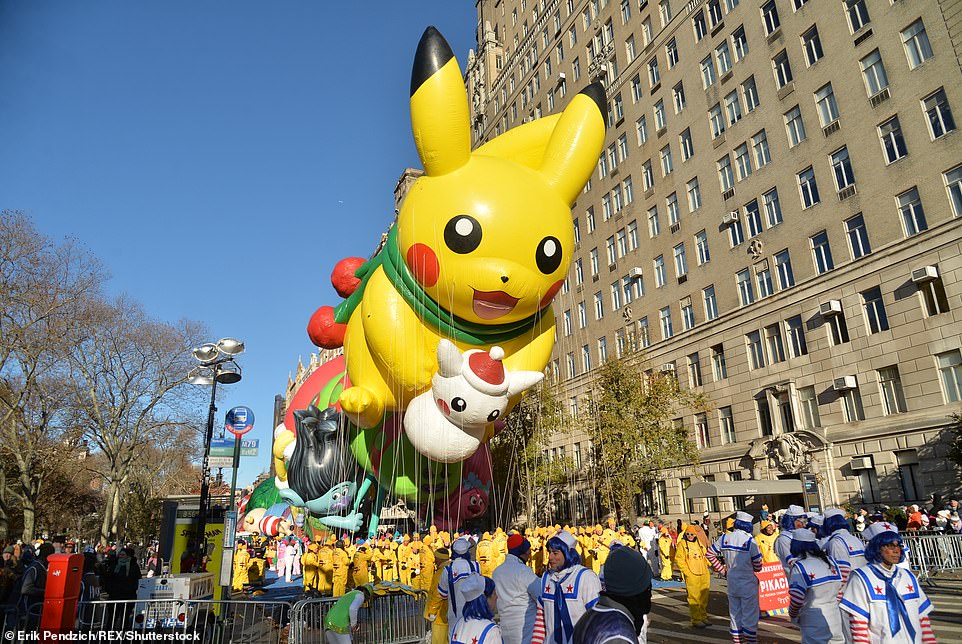 Gotta catch em all! Pikachu electrifies a crowd as it makes its way downtown 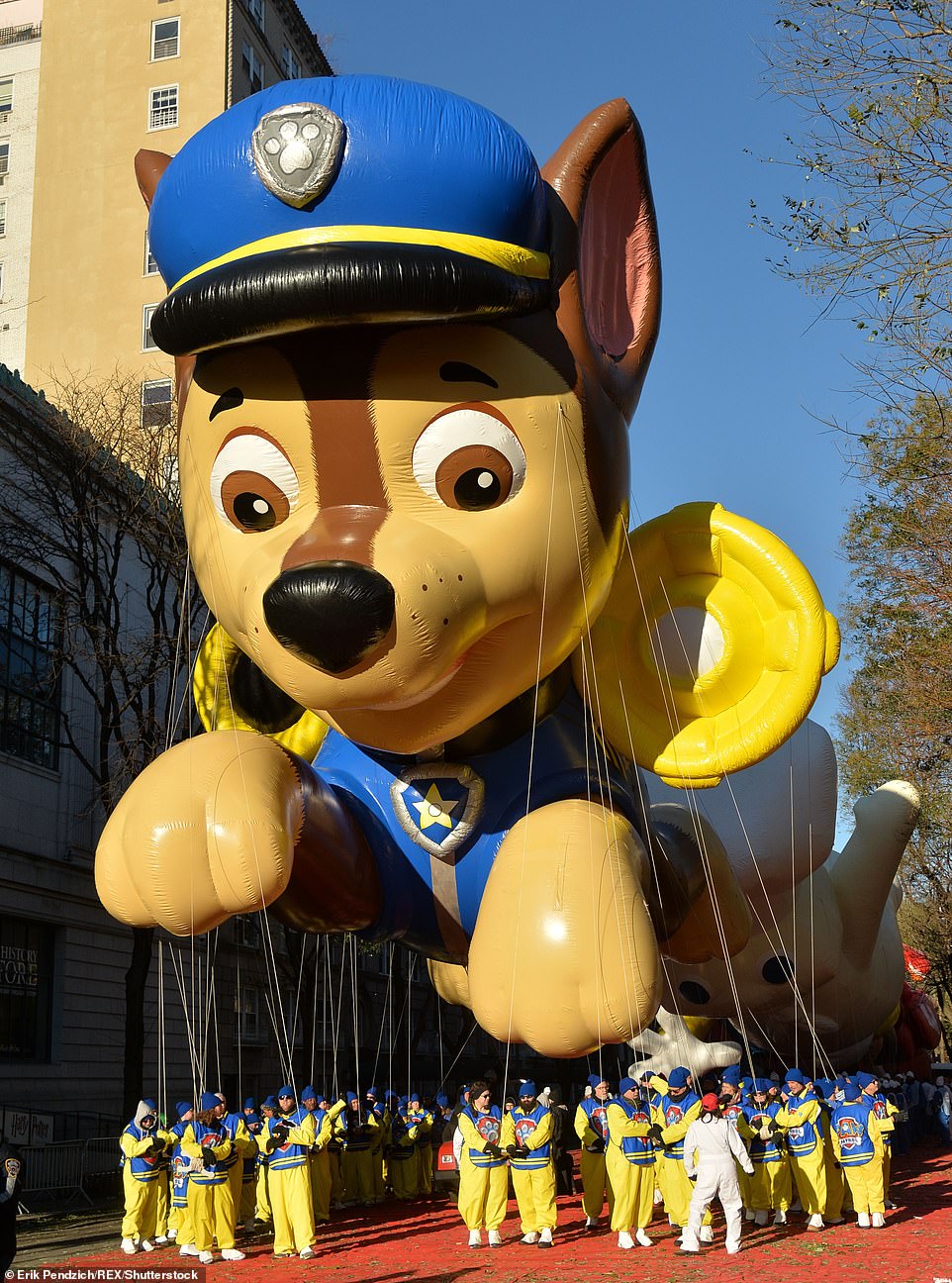 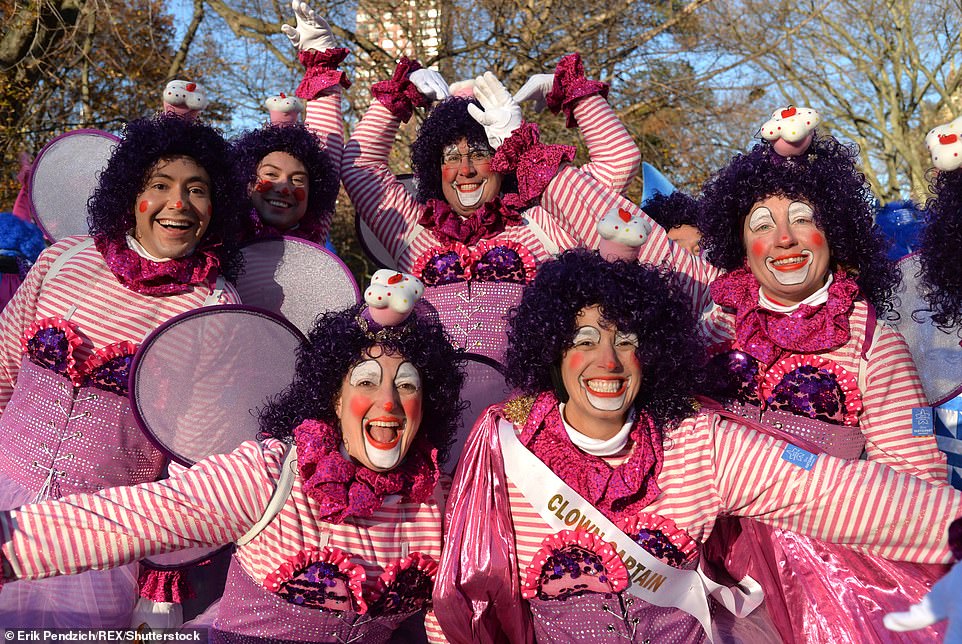 Clowning away! These goofy ladies were ready to enjoy their time 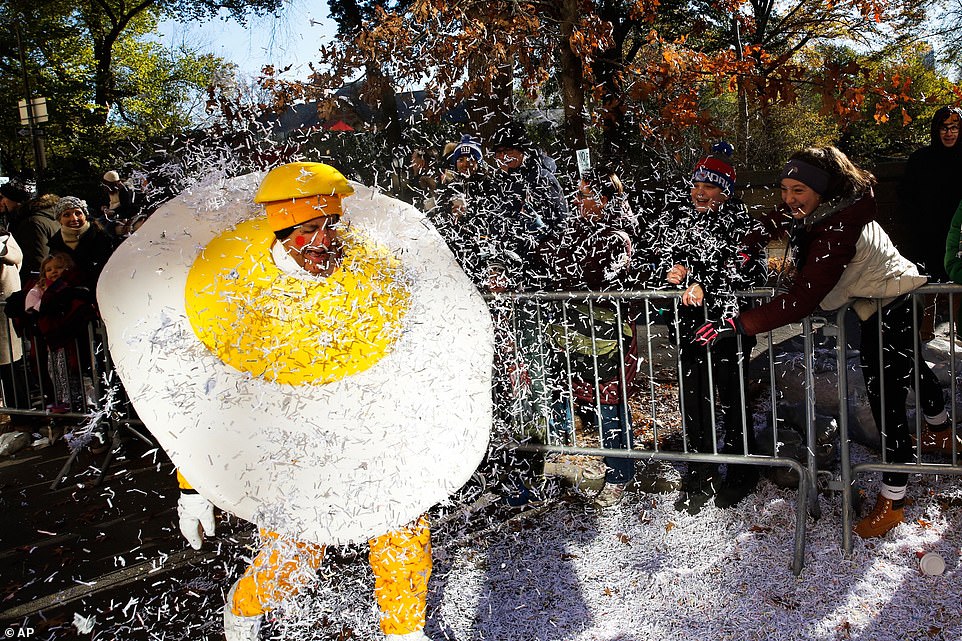 Sunny side up! A performer wearing an egg costume is showered with funfetti 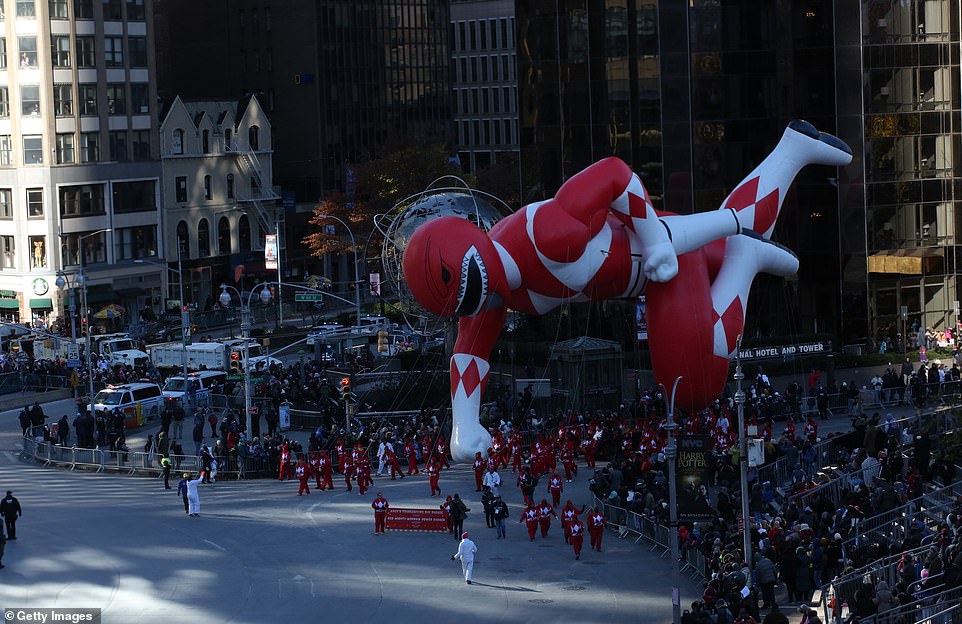 The Fred Estaire Dance Company made its first appearance to the parade and honored the classic musician.

Various celebrities – including Jennifer Lopez Sterling K. Brown, Howie Mandel, Jennifer Hudson and more – shared little tidbits about their own traditions with Thanksgiving and the parade.

Many on social media took issue with Rita Ora’s performance as she appeared to be lip syncing. John Legend came to her defense and revealed that everyone was lip syncing because the floats ‘don’t have the capacity to handle the sound requirements for a live performance.’

The parade has been held annually since 1924, and has featured large balloons since 1931.

It travels for 46 blocks, making its way from Central Park West all the way down to midtown Manhattan. 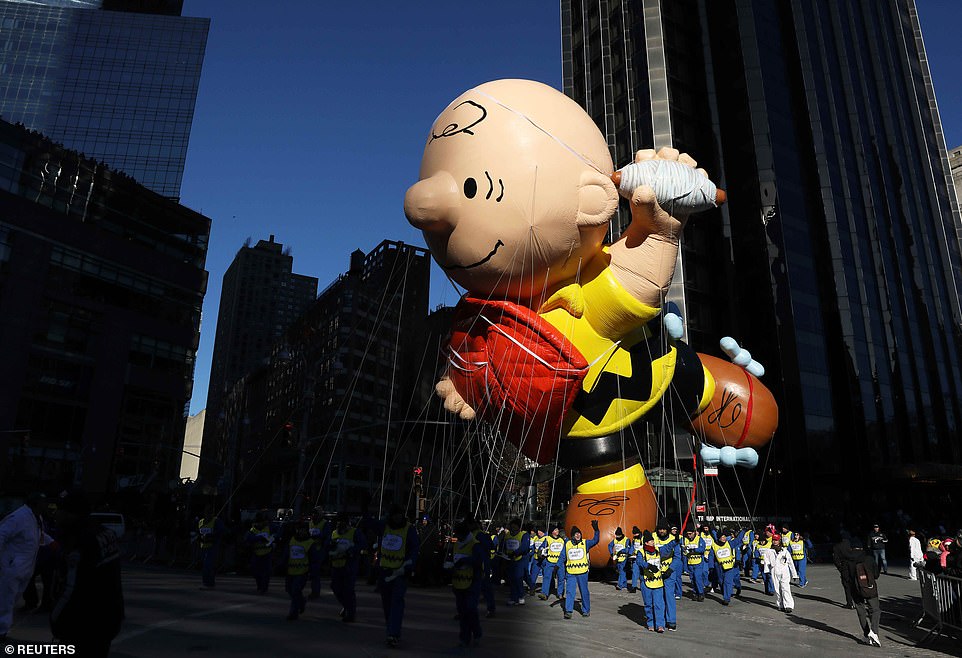 Charlie Brown, the kid that never gives up, is pulled along the route of the parade 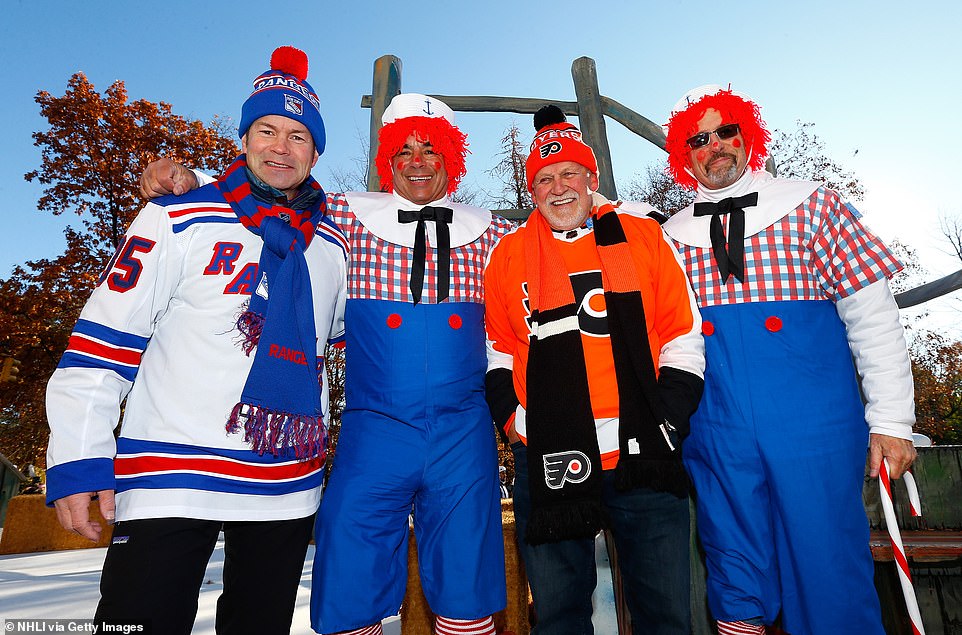 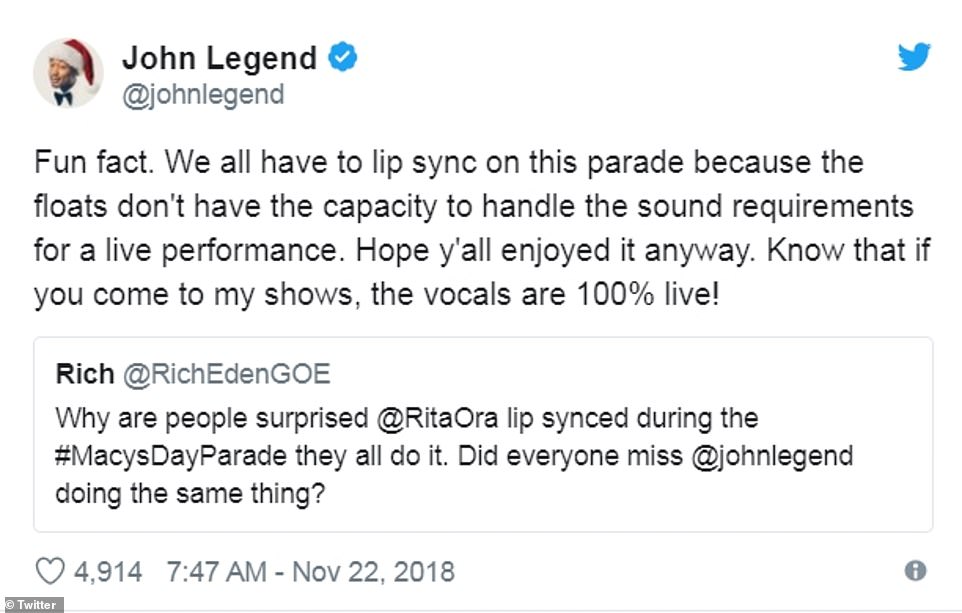 High winds have forced the balloons to be removed from the route just once, in 1971, when winds gusted up to 45 miles per hour.

In 1997, high winds forced the character balloons to be carried very close to the ground, limiting the view of spectators.

Injuries also occurred at the parade in 1993 and 2005, both times when balloons struck lamp posts or street lights. 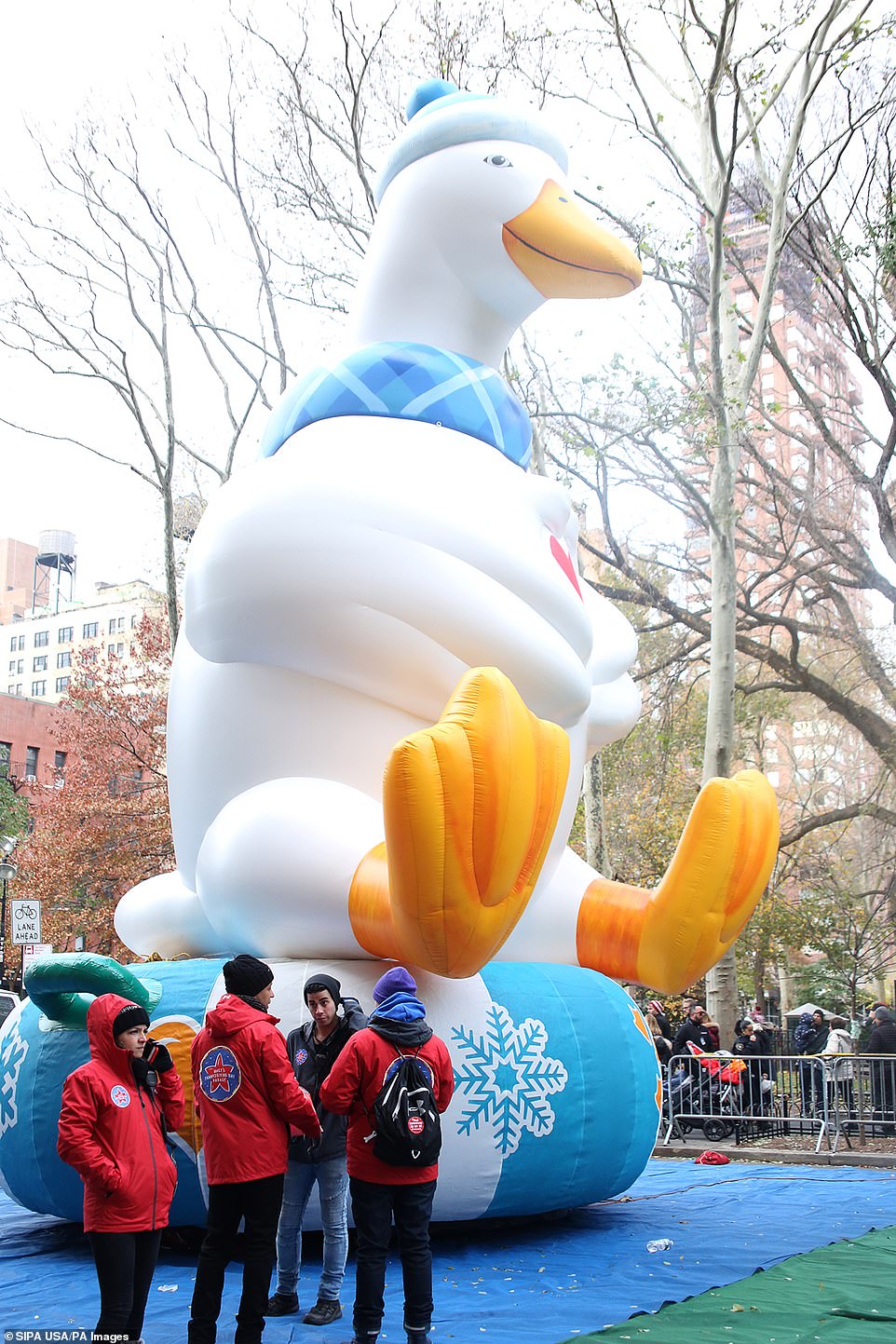 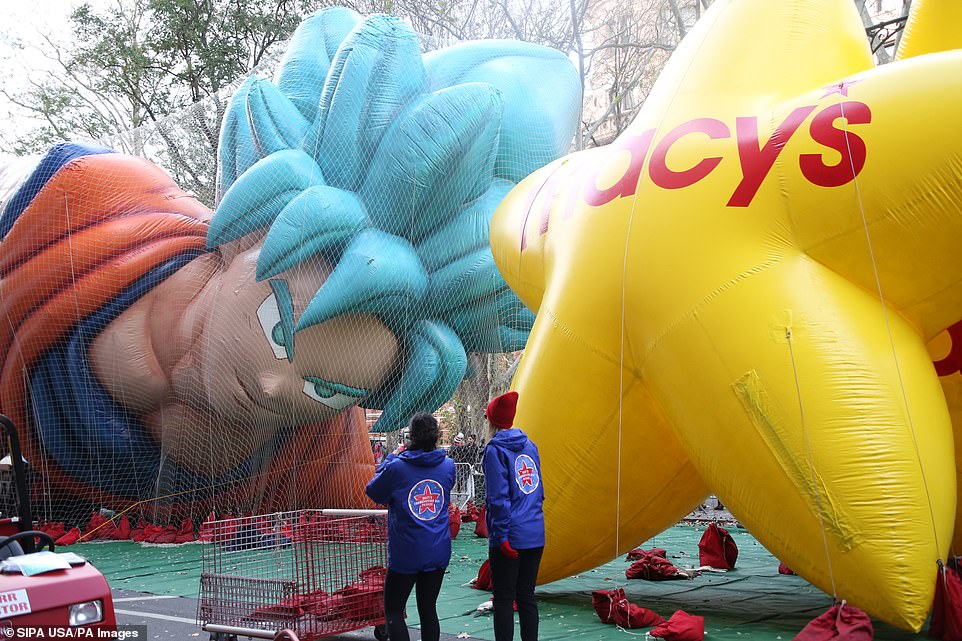 Wednesday preparation for the parade 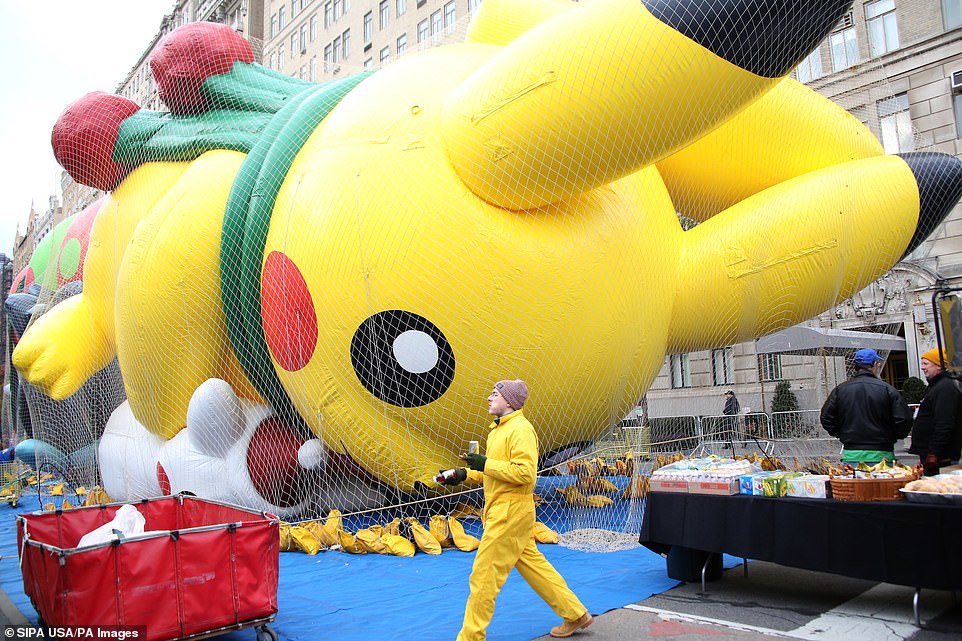 A Pikachu float gets ready to make its debut on Wendesday