We’ve all had to get used to the term ‘social distancing’ over the past 18 months.

But it turns out it’s not just humans who need to keep their space to ward off the risk of disease.

Coughs and colds also spread rapidly between mountain gorillas when they stand in close proximity to one another, a new study has found.

Researchers discovered that respiratory infections are much more likely to spread within wild groups of apes than they are between neighbouring ones.

Keep your distance! Coughs and colds also spread rapidly between mountain gorillas when they stand in close proximity to one another, a new study has found

WHY IS THE COMMON COLD SO DEADLY FOR APES?

Past research has shown that apes including chimpanzees and gorillas can contract the common cold virus.

Not only that, but infectious disease is now listed among the top three threats to some great ape groups.

While many viruses, bacteria and parasites circulate in apes without causing harm, some respiratory infections that are mild for humans are known to cause severe disease or death in our closest living relatives.

The Ebola virus is also thought to have killed thousands of chimpanzees and gorillas in Africa.

Fears have even been raised about the threat coronavirus could pose to ape populations, with conservationists calling for urgent action to protect them.

Because humans and gorillas are so closely related, our ape cousins can catch many of the same diseases us as.

However, infections that are relatively mild in humans can have major consequences for gorillas and chimpanzees, where a case of the common cold or flu can be lethal.

That’s why this study is important because it sought to understand how the diseases are transmitted through groups in an attempt to help shape future conservation strategies.

It was carried out by scientists from the Dian Fossey Gorilla Fund in the Volcanoes National Park, Rwanda.

They studied 15 respiratory outbreaks across the past 17 years to understand how the infections spread through a population of mountain gorillas.

‘If we can better understand how diseases have spread in the past, we can better prepare for and respond to outbreaks in the future,’ said Dr Robin Morrison, the study’s lead author.

Researchers found that the close contact and strong social relationships within gorilla groups allowed respiratory diseases to spread rapidly between the apes.

What they couldn’t predict, however, was the patterns of transmission by a group’s social network. In one of the outbreaks, it took just three days for 45 of the 46 groups members to begin coughing.

This differed from the findings in an earlier study, in which the more spread out social organisation of chimpanzees led to slower transmission overall.

Researchers were also able to predict disease spread based on the chimpanzees’ social network — for example those central to the network were more likely to display clinical signs than those with fewer connections.

The good news for the endangered gorilla population in this latest study is that researchers discovered there were limited opportunities for infections to spread between neighbouring groups.

‘The outbreaks we investigated all appeared to stay within a single group rather than spreading through the wider population,’ said Yvonne Mushimiyimana, a co-author on the project. 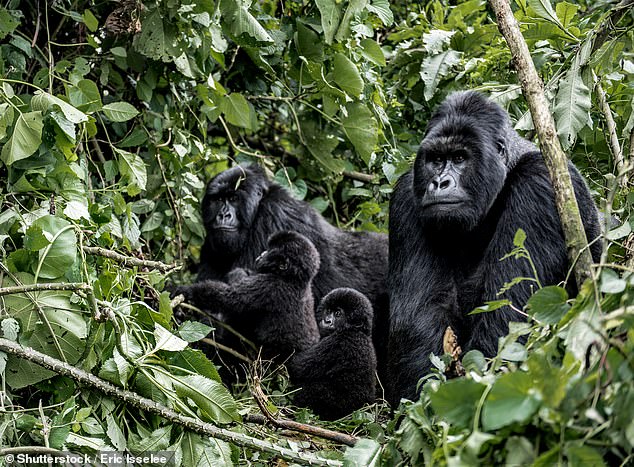 Because humans and gorillas are so closely related, our ape cousins can catch many of the same diseases us as

‘Gorilla groups interact fairly infrequently, and when they do, they tend to keep their distance, rarely approaching to within that crucial 1-2 metre distance.’

This aloofness toward neighbouring groups may actually help protect the wider population by limiting broader transmission of these infections, the experts said.

However, that begged the question of where the outbreaks were coming from if neighbouring gorilla groups weren’t infecting each other.

Previous studies in wild apes have placed the blame on pathogens of human origin.

One example is in Uganda, where two nearby chimpanzee communities began showing signs of respiratory infection at the same time, only for genetic analysis to reveal that the infections were caused by two entirely separate human pathogens.

It was a surprise to scientists but showed that both infections had been independently transmitted from humans rather than spreading between two chimpanzee communities.

‘Our best guess is that these infections in mountain gorillas are coming from humans,’ said Morrison.

‘It really highlights the importance of ongoing efforts to minimise wild great ape exposure to human diseases during activities like research, tourism and protection.

‘Vaccination, mask wearing and maintaining adequate distance are all more important than ever in the midst of a global pandemic.’

The aim of the research is to identify strategies to limit the spread of disease. Researchers hope their study will help understand how transmission might work in different gorilla populations.

‘The findings from this study suggest that since respiratory diseases transmit quickly within gorilla groups and transmission between groups is much less common, strategies that prevent initial transmission into a group may be most effective,’ said Dr Tara Stoinski, president and chief scientific officer of the Fossey Fund.

‘For Covid-19 and other human respiratory pathogens, that means preventing that first introduction of a disease from a human to a gorilla.’

She added: ‘Although the research was completed well before the appearance of Covid-19, the current pandemic highlights the fact that it is more vital than ever to minimise pathways of human-ape disease transmission, which pose a risk to wild great apes and humans alike.’

The research is published in the journal Scientific Reports. 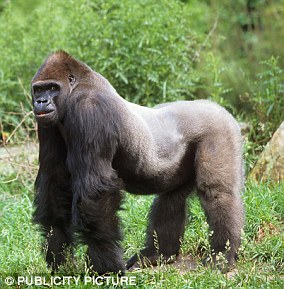