Teenage sensation Cole Palmer admitted he was starstruck at playing with the likes of Kevin De Bruyne upon moving into the Manchester City first-team.

Academy product Palmer, 19, scored on his FA Cup debut in a 4-1 win over Swindon on Friday.

Having already netted in the Champions League and Premier League for current champions City, Palmer netted his first goal of the Blues’ FA Cup campaign with a top-corner finish in the 82nd minute to dash hopes of a Swindon comeback.

Speaking following victory in Wiltshire, Palmer said: ‘When I first moved up to the first team I obviously thought ‘wow, I am playing with the likes of de Bruyne and players like that.

‘I wouldn’t say it was normal, but I am getting used to it every day, training with them and playing with them when I get minutes. I am enjoying it.

They all make me feel at home every day when I go in. It is not just on the pitch, but off the pitch as well. They all give me advice, tell me what to do and what not to do, so I really enjoy it.’

City’s progression to the fourth round of the FA Cup came as the club battles a Covid-19 outbreak with Manager Pep Guardiola, 14 staff, and seven first-team players all isolating at home. 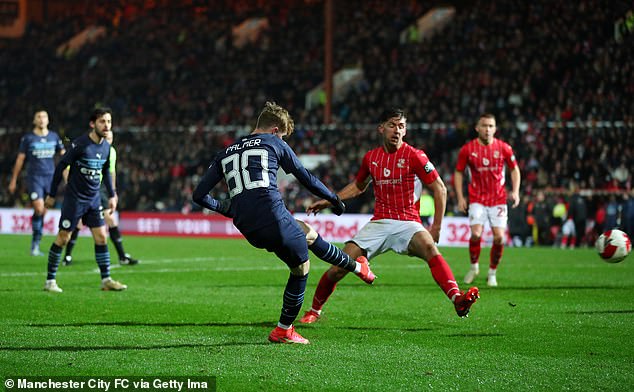 Academy product Palmer, 19, scored on his FA Cup debut in a 4-1 win over Swindon 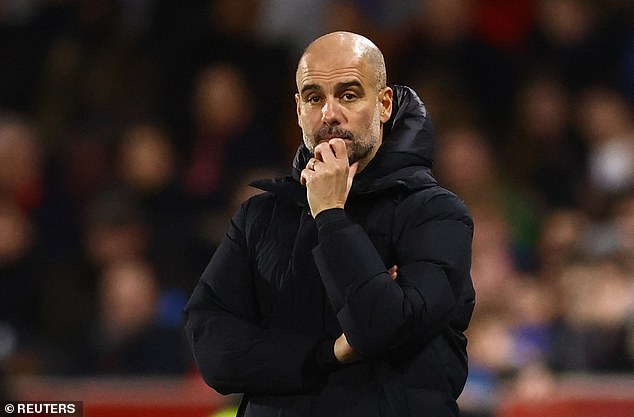 Despite Pep Guardiola’s absence, Palmer felt he did enough to impress the title-winning manager with his free-flowing performance on the wing in front of a 15,000 strong crowd

Despite Guardiola’s absence, Palmer felt he did enough to impress the title-winning manager with his free-flowing performance on the wing in front of a 15,000 strong crowd.

‘I am delighted for the team. It is obviously a tough place to come. We are through to the next round of the FA Cup which is a top competition, so we are all very happy.

‘Wherever I play, I like playing. I don’t mind [playing] on the right. I like trying to take players on and on the right you can do that. I just enjoyed it and tried to create chances to help the team. When I play, I just try to score and create chances.

Hopefully I will get more minutes by working hard, keep going, keep my feet on the ground and keep striving for more,’ he said.