A whole host of stars have bagged tickets to the nail-baiting game that will take place at Wembley Stadium, with Coleen Rooney making sure not to miss out.

The WAG, 35, was seen arriving for the match with her footballing husband Wayne Rooney and the pair were closely followed by their fellow celebs, including Declan Donnelly and his wife and Kelly Brook and her long-term boyfriend Jeremy Parisi.

Throwing her support behind England as they play in their first final in 55 years, Coleen seemed eager to get into the stadium.

Ready to go: Coleen Rooney nailed causal chic as she arrived at Wembley ahead of England’s final on Sunday night and joined a host of stars including Declan Donnelly and his wife Ali Astall and Kelly Brook and her boyfriend Jeremy Parisi

Looking casually chic, the mum-of-four was dressed down in denim shorts and an oversized white and blue striped shirt.

Coleen made for a leggy appearance outside Wembley as she sported a pair of bright white trainers and held onto a face covering in one hand.

Adding a touch of glam to her outfit, Coleen accessorised with a large watch and bracelets and opted for natural make-up, while wearing her long locks back into a stylish ponytail.

She was seen chatting with friends outside, while former England captain Wayne soaked up the atmosphere with fan-goers. 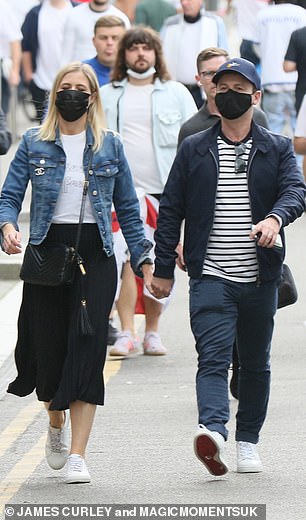 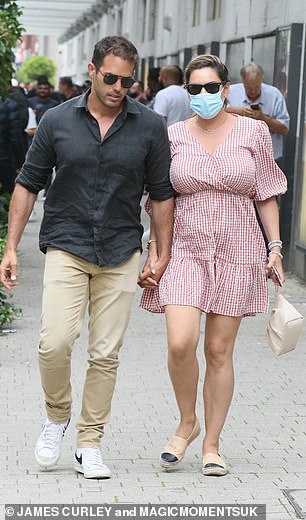 Star-studded:  Declan Donnelly and wife Ali Astall were among crowd-goers arriving, while Kelly Brook and boyfriend Jeremy Parisi strolled into the stadium hand-in-hand 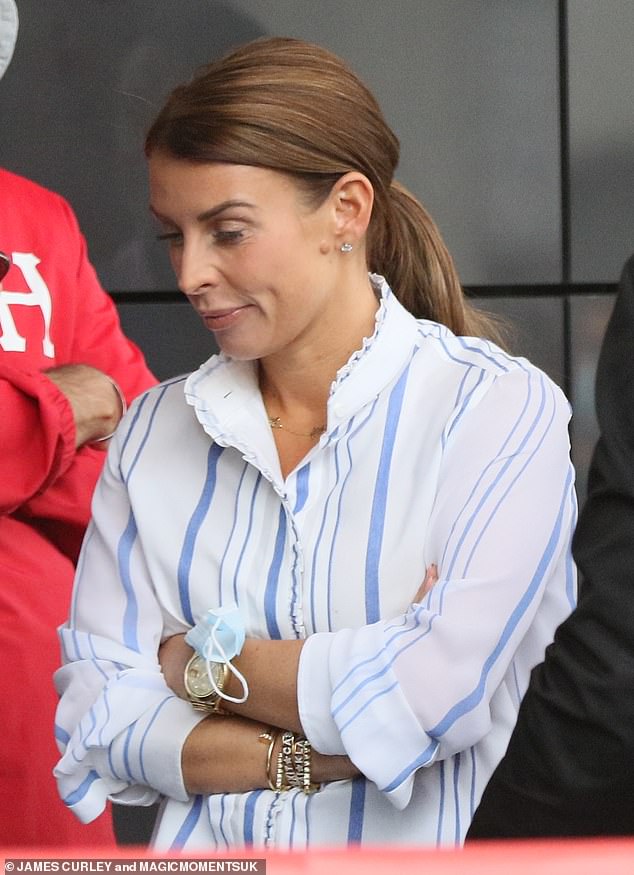 Finishing touches: Coleen accessorised with a large watch and bracelets on her wrist

Stylish: The WAG made for a leggy appearance as she sported denim shorts, an oversized striped shirt and bright white trainers

The sports star, who cut a smart figure in dark jeans and a matching blazer, was seen taking selfies with a group of football fans as he made his way through the grounds.

Wayne has been a regular at Wembley, with him and Coleen seeing taking their sons to England’s semi-final match against Denmark on Wednesday night.

Coleen shared a snap of herself and Wayne inside the stadium with their excited brood after England’s 2-1 win.

She captioned her post: ‘What a night!!…. Fantastic England, it’s almost Home.’ 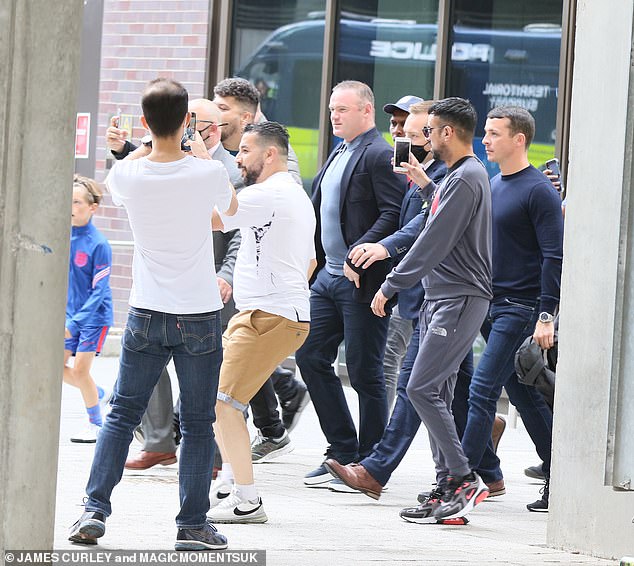 Soaking it up: Wayne Rooney was seen getting into the football spirit with fans 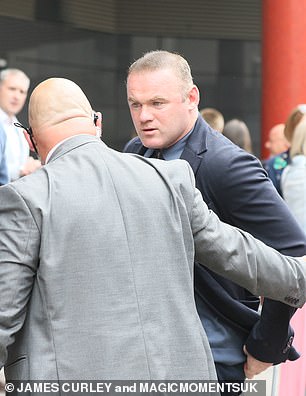 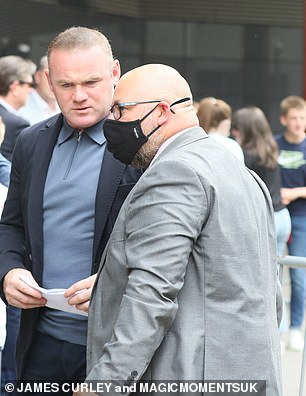 Cheering the lads on: Former England captain Wayne was seen heading into the stadium ahead of the game 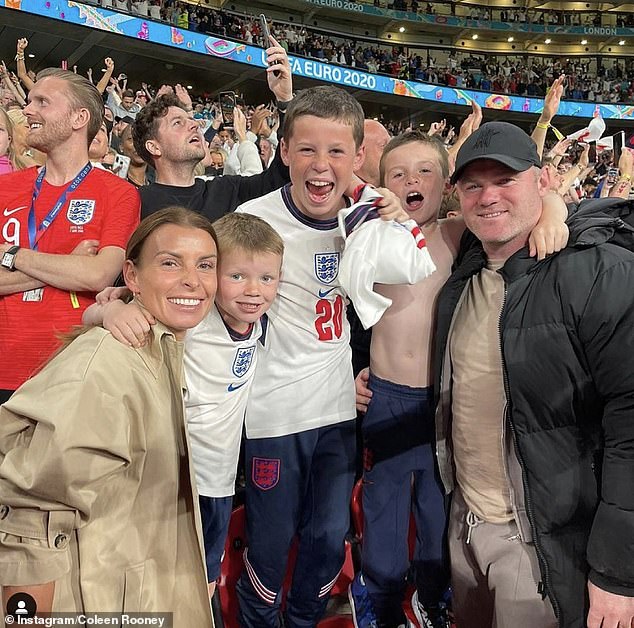 Football fans: Coleen and Wayne have been regulars at Wembley, with the pair taking their kids to England’s semi-final match against Denmark on Wednesday night

Making sure not to miss England’s all-important final, Dec was seen rocking up to Wembley with his wife Ali.

The pair were seen strolling up to the stadium hand-in-hand while sporting black face coverings amid the pandemic.

Cutting a casual figure for the game, Dec was seen sporting a striped T-shirt and dark jeans.

He donned a baseball cap and trainers, while Ali complemented her husband in a chic monochrome outfit.

She paired together a black midi skirt and white tee with a denim jacket. 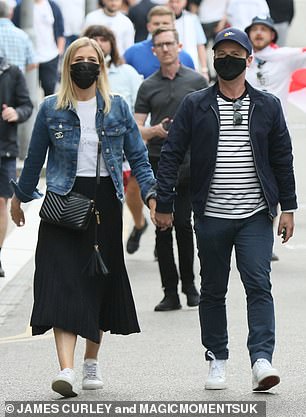 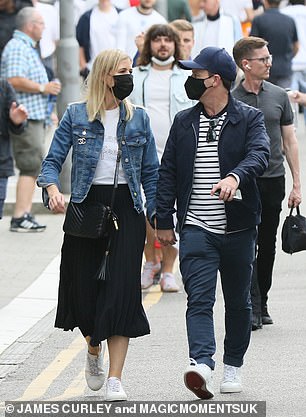 Showing support: Making sure not to miss England’s all-important final, Dec and wife Ali were seen rocking up to Wembley holding hands 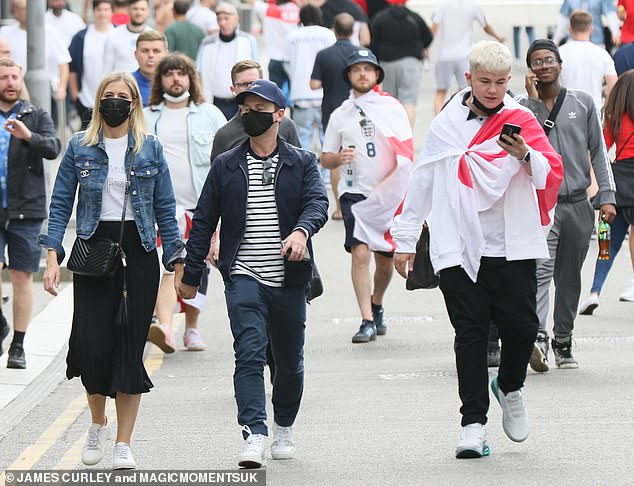 Cheering on: Dec was leading the way as he and Ali prepared to take their seats 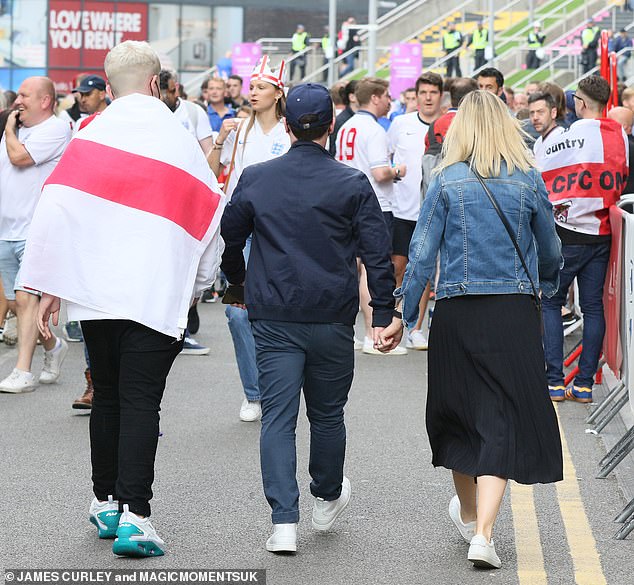 In the thick of it: The pair were surrounded by football fans sporting England shirts and flags

They were later joined by Kelly Brook and her long-time boyfriend Jeremy Parisi.

Looking loved-up, the couple, who have been dating since 2015, were hand-in-hand.

Kelly dressed up for the occasion in a gingham wrap dress that she paired with woven espadrilles and sunglasses.

Teaming her summery mini dress with a cream clutch bag she toted in one hand, Kelly wore her caramel locks up and back from her face.

She made sure to wear a mask andwas seen deep in conversation with her beau as they arrived, with Jeremy looking dapper in a black linen shirt and cream chinos. 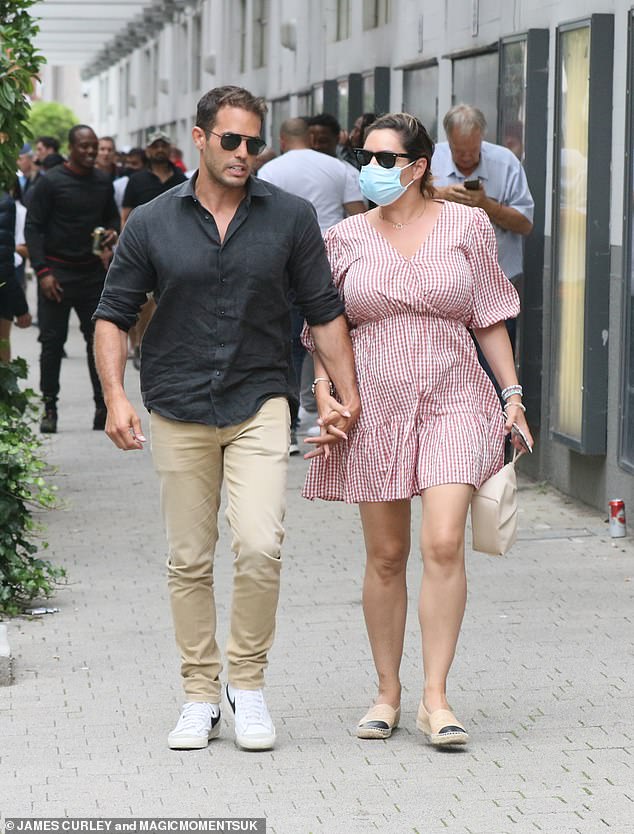 Smitten: Kelly dressed up for the occasion in a gingham wrap dress while Jeremy cut a dapper figure in a black linen shirt and chinos 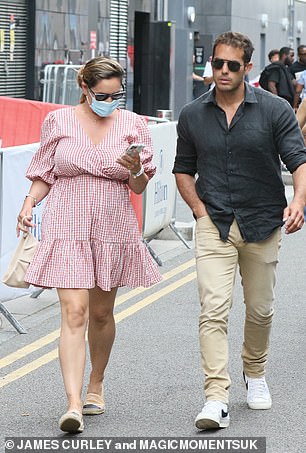 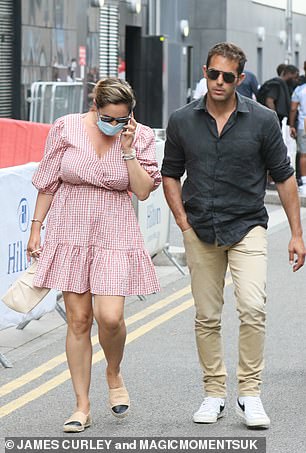 In demand: Kelly was seen taking a phone call as the pair made their way into the stands 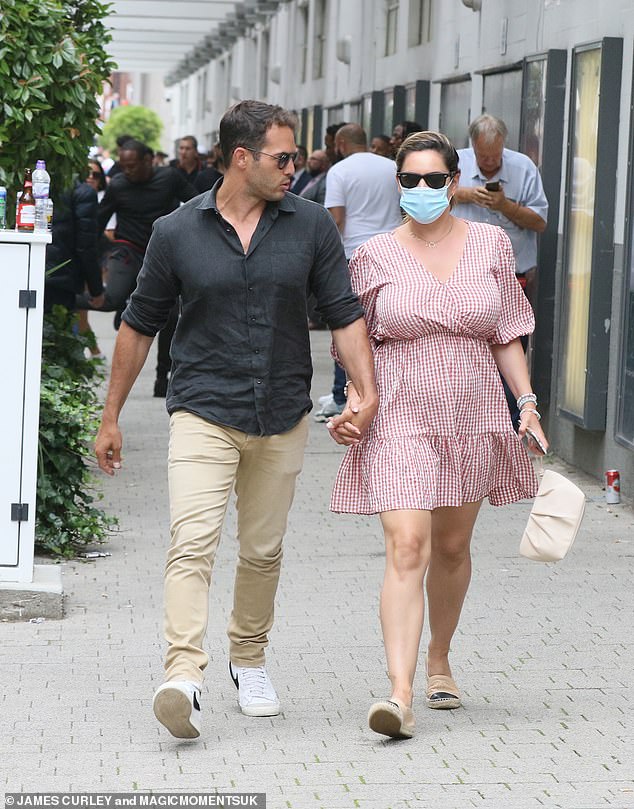 Happy couple: The duo held hands and were deep in conversation as they arrived

Naturally the game drew out former footballing stars, with Rio Ferdinand commanding attention from football fans as he arrived at Wembley.

Rio, who has been a pundit throughout the European Championship, was mobbed by crowd-goers as he made his way up to the stadium.

The former England player was seen repping his country as he donned an England jacket and got involved with the crowd, as he stopped for photos.

Excited to see the pro, fan-goers mobbed Rio, with one throwing beer around as they surrounded him.

Sunday night marks the final of the Euros 2020 and will see England go head-to-head with Italy for the title.

It’s the first time England have ever been in the final of a European championship and the first final they will place in over five decades since their World Cup win in 1966. 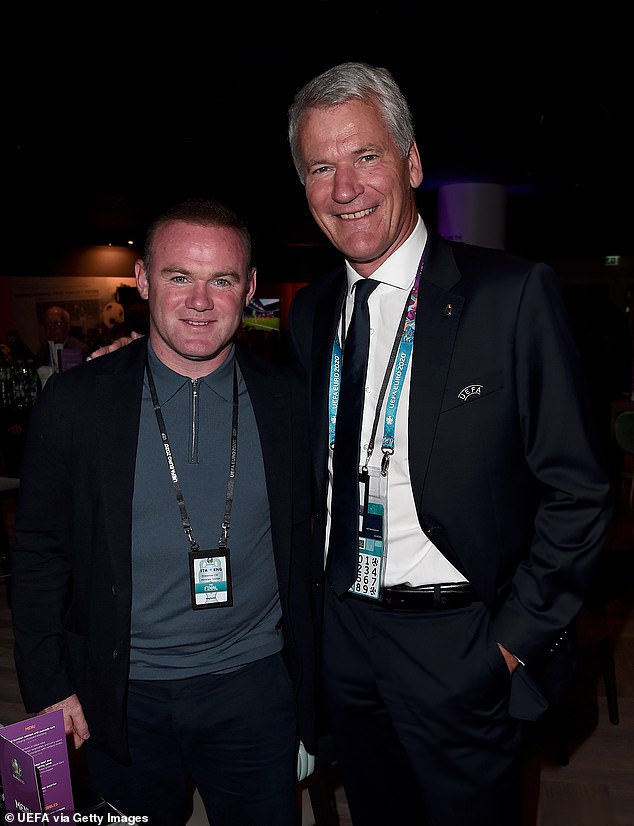 Rubbing shoulders: Wayne was seen catching up with former England international and Derby County manager David Gill, who is also Vice-President of the UEFA Executive Committee 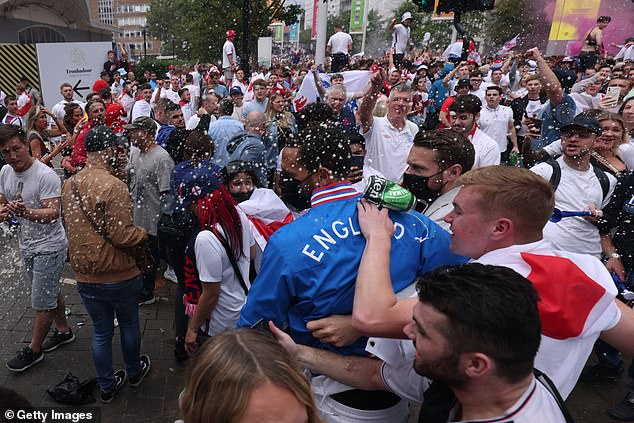 Centre of attention: Rio Ferdinand was mobbed by fans outside Wembley, with crowd-goers throwing beer around as they crowded around the sports star 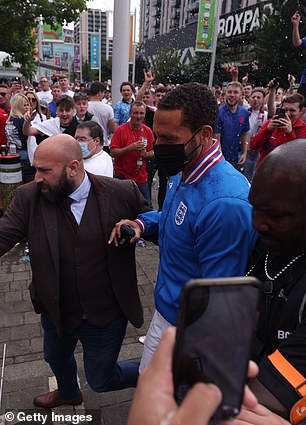 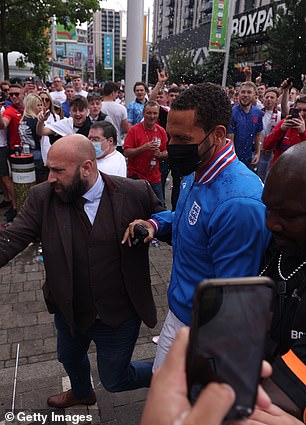 Make way: Rio was flanked by security as he made his way up to the stadium 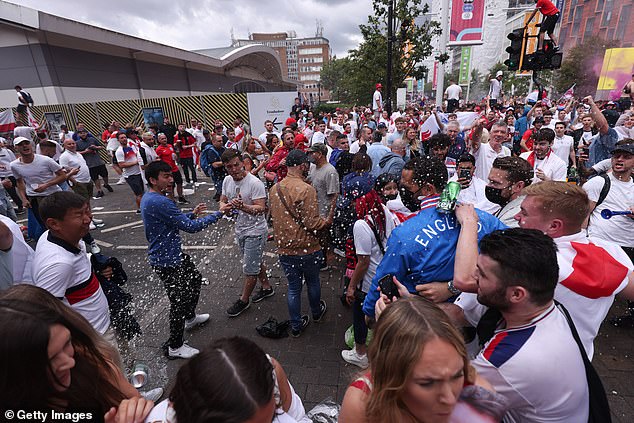 Getting involved: Rio surprised football fans as he stopped for photos