Wayne Rooney and wife Coleen have flown back to the UK as their preparations to move their family home get underway amid another storm about the footballer’s nights out.

The couple were seen packing a car with boxes outside their Washington DC mansion before driving to the city’s airport to board a flight to Britain.

And Coleen, 33, was pictured with her wedding rings back on after being seen without the bands in recent days – fuelling speculation about the state of their marriage amid claims Wayne, also 33, was seen chatting to women in a nightclub in Vancouver earlier this month.

Today they seemed back on track as they made their way through the airport, accompanied by a blonde man in a striped shirt.

Coleen is moving their four sons – Kai, nine, Klay, six, Kit, three, and Cass, one – to the UK ahead of Wayne’s move to Derby County in the new year following the end of the Major League Soccer season.

Wayne Rooney, left, and wife Coleen, centre, are flying back to the UK from Washington DC as their move home gets underway. They were pictured at the airport accompanied by a blonde man in a striped shirt 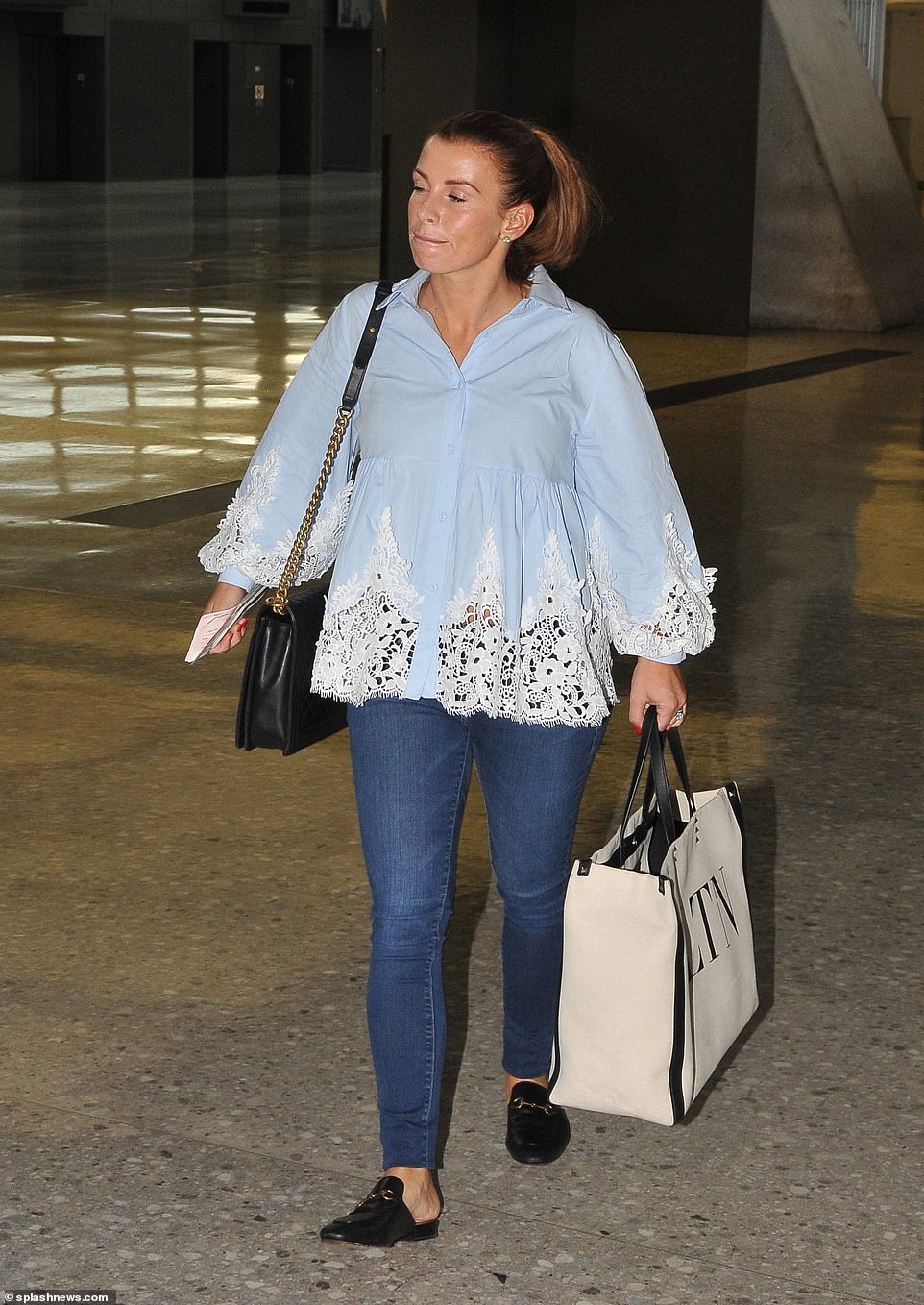 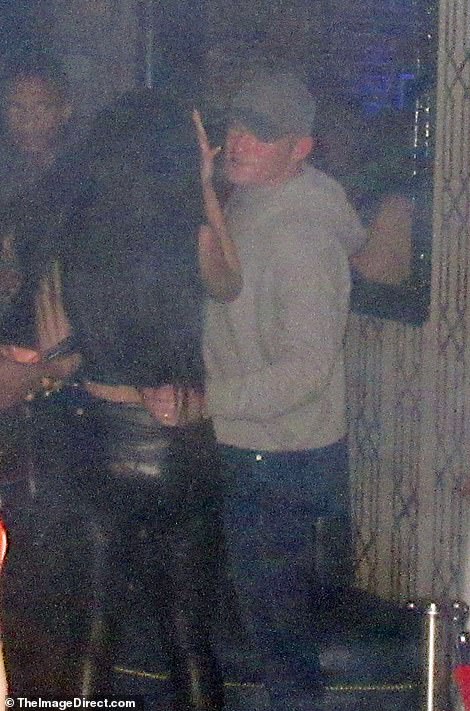 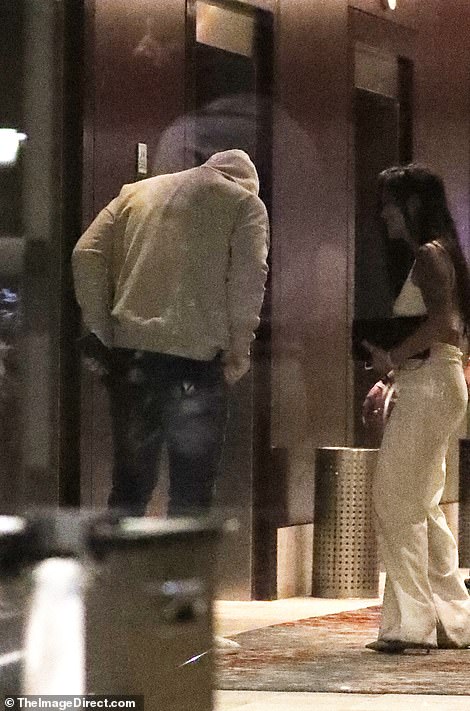 Rooney was pictured on a night out with women in Vancouver earlier this month but said on Twitter that a woman he was seen speaking to in a nightclub was a fan asking for an autograph (left); and denied getting into a lift with a woman in a hotel lobby (right) 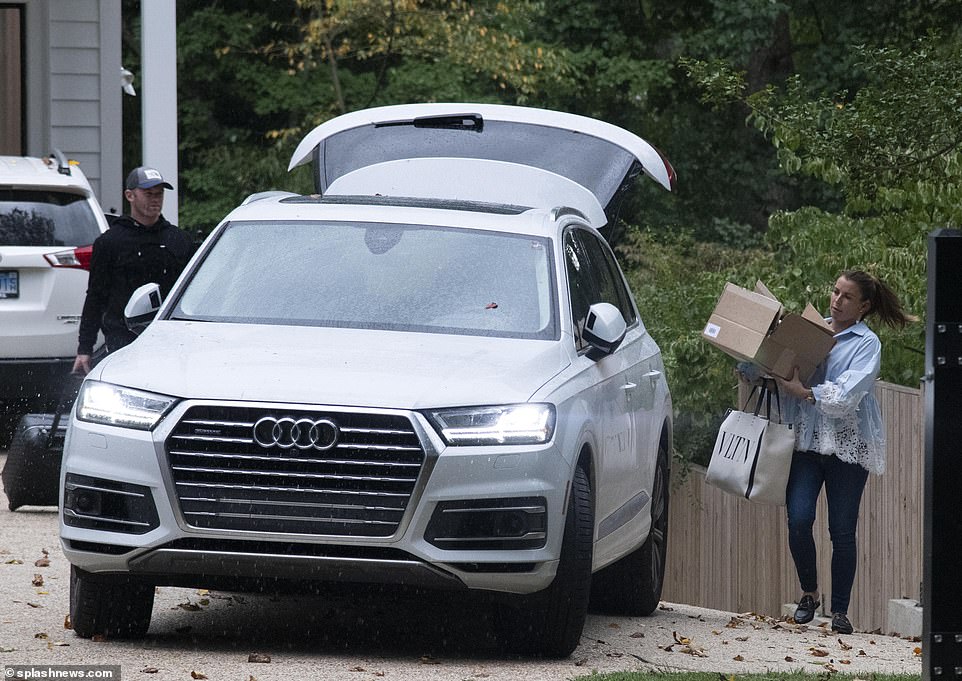 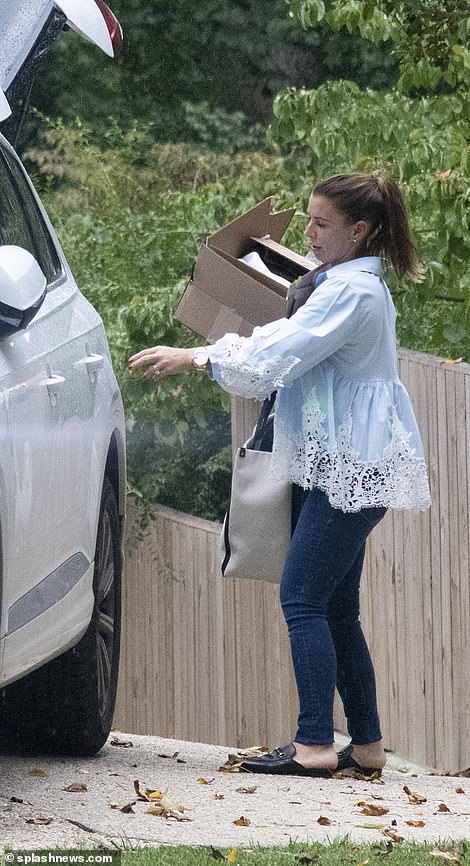 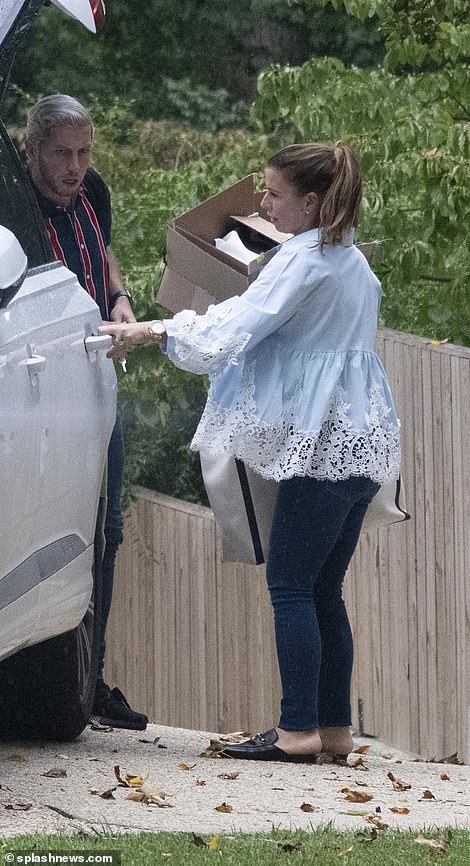 They left their DC home hours after a removal van filled with suitcases arrived at the DC home, with Coleen believed to be packing up clothes to take back to the UK. Coleen is pictured left and right with boxes to put into an Audi 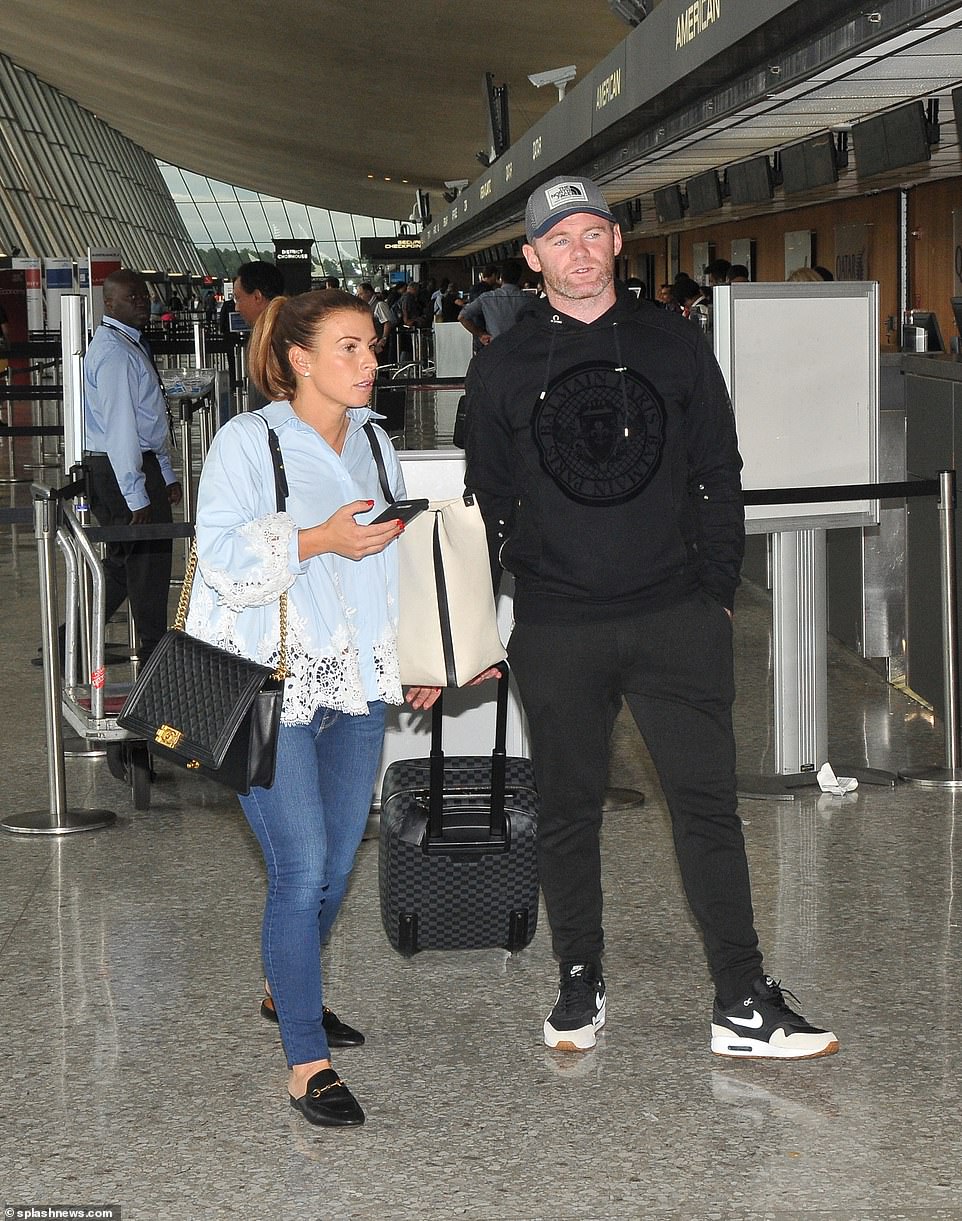 Rooney will continue playing for DC United, with whom he has a £10million contract, until at least October.

It comes after Rooney released a statement yesterday, angrily hitting back at reports he got into a hotel lift with a mystery woman after a night out.

The footballer was spotted in a hotel lobby with the woman after seven hours of partying in Vancouver, Canada, earlier this month, when he was also seen with his arms around a woman in a nightclub.

Responding to the reports on Twitter, he wrote: ‘Nothing happened between me and any girl on that night in Vancouver. I did not enter the lift alone with the girl pictured in the hotel foyer.

‘The girl pictured in the club was simply one of many who innocently asked for photographs and pictures.’

Meanwhile a removal van was pictured at the couple’s DC mansion yesterday with half a dozen boxes containing large suitcases arriving ready to be packed with their belongings – believed to be mainly clothes.

A source close to the couple told MailOnline: ‘Wayne and Coleen are preparing to move back to the UK. They are getting things ready.

‘But there is absolutely no suggestion that Wayne won’t finish his contract with DC United in the States. 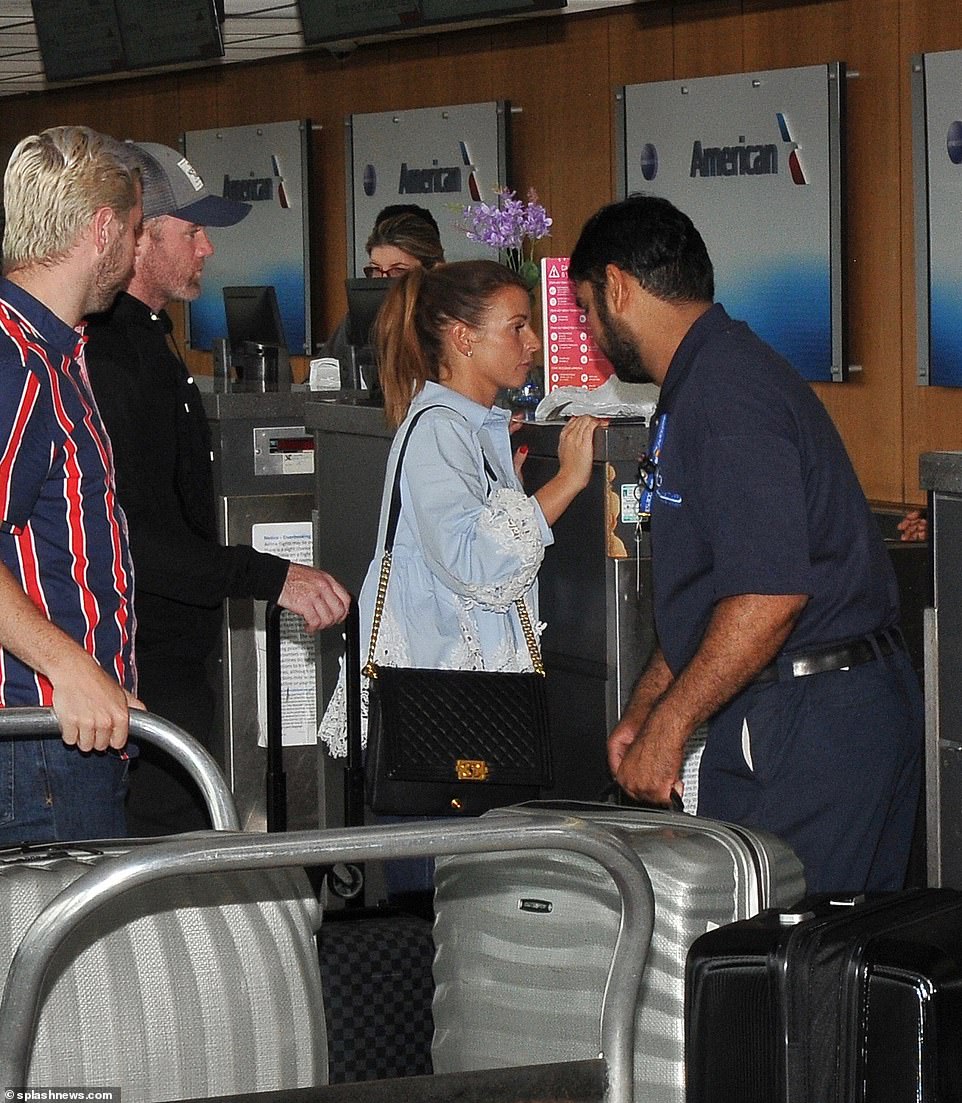 The couple were pictured with a horde of suitcases inside the airport, believed to contain plenty of Coleen’s designer clothes 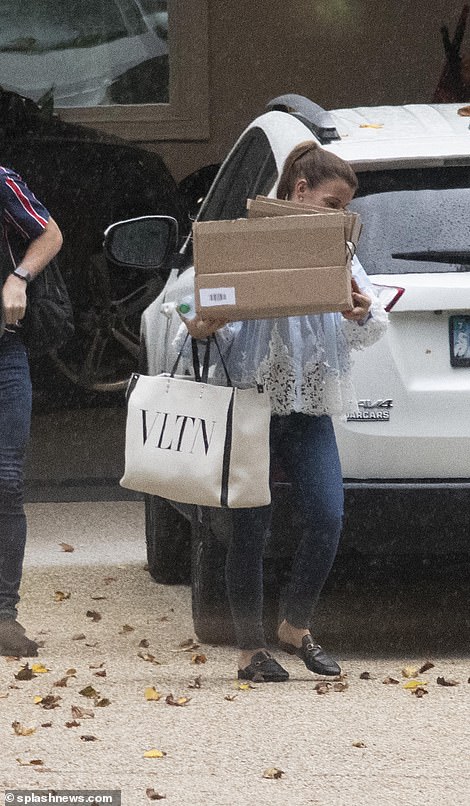 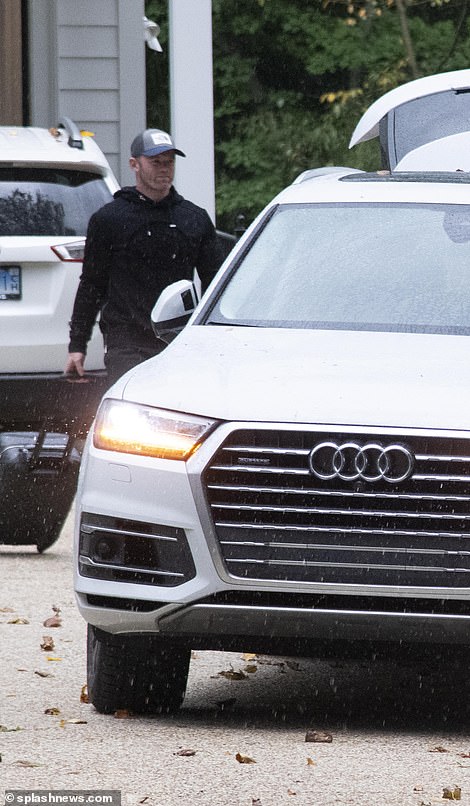 Wayne was also pictured taking a black suitcase out of their DC home, right, with the couple appearing to be travelling light themselves, with Coleen seen with a white Valentino handbag, left, worth £810 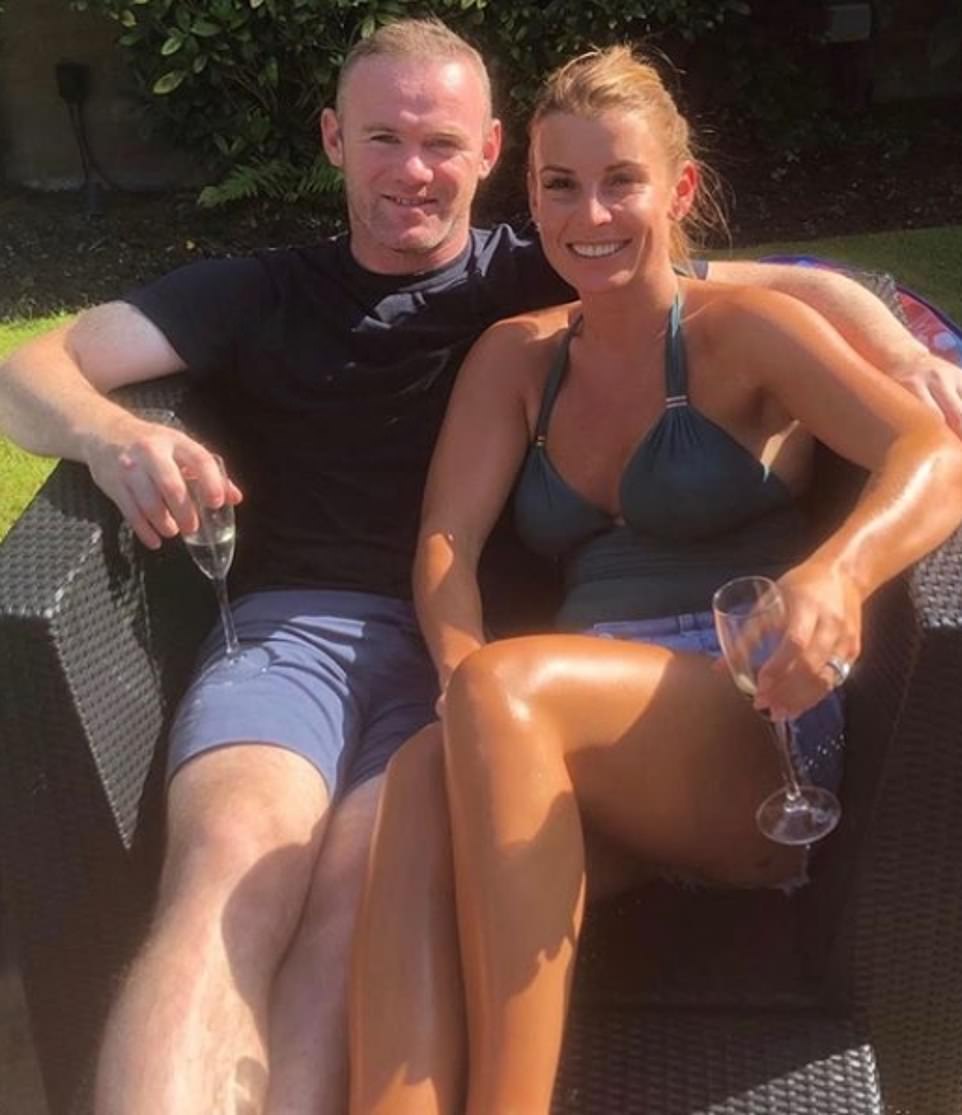 Reports surfaced recently that father-of-four vowed to go teetotal and have counselling to help him stay dry in a bid to save his marriage. He’s been with Coleen (pictured together in July) since they were teenagers, and they’ve been married 10 years 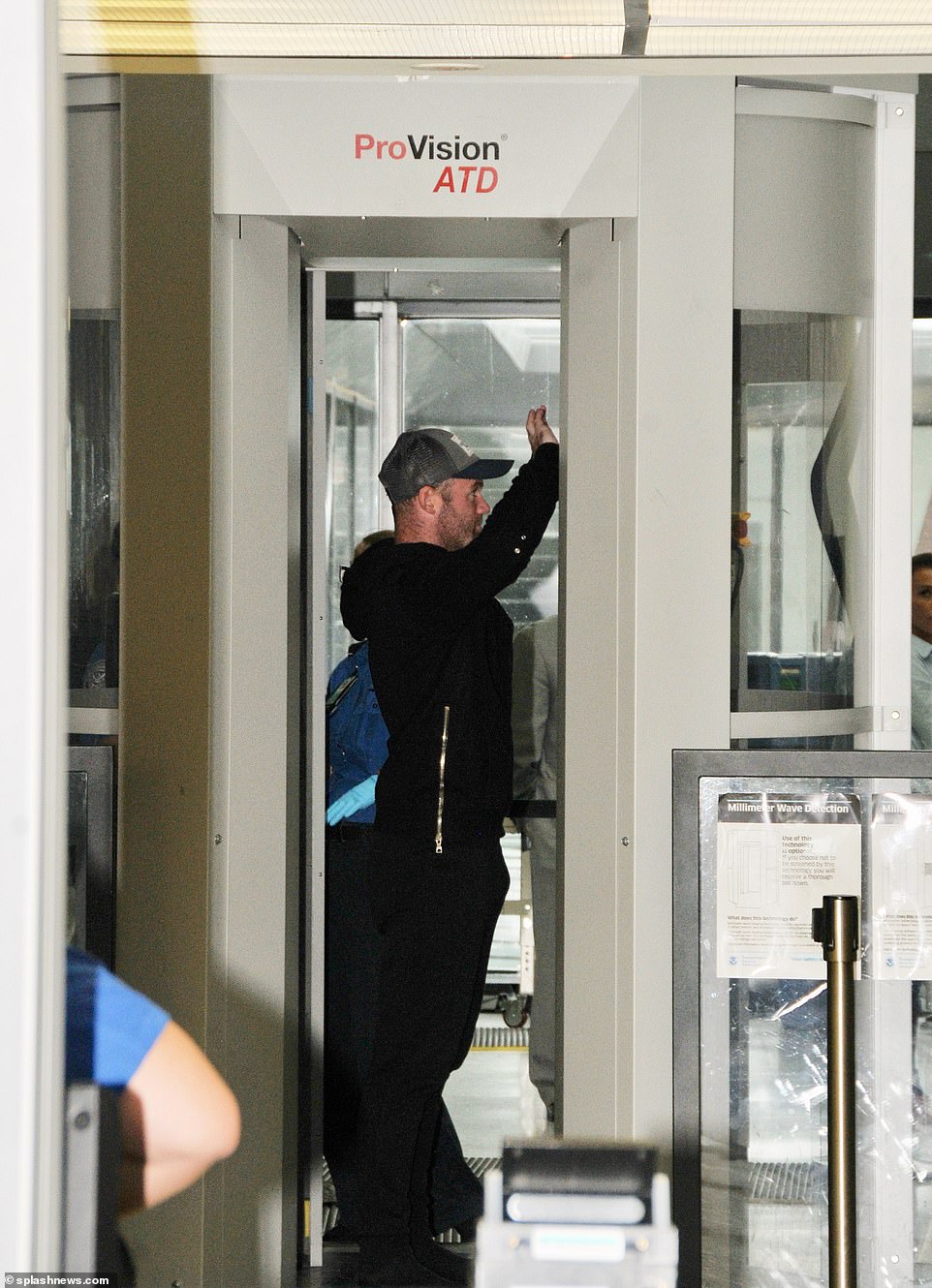 ‘He will continue to play for the club until the end of the season, which will be at least until the beginning of October, but hopefully longer if they make the play-offs.

‘Then he will start with Derby County on January 1. The family will all then live permanently in their new home in the Cheshire.’

The delivery is understood to have been ordered by Coleen so she can pack up her clothes and take them back to the UK.

She is known to be an avid shopper and has a collection of designer clothes.

By taking her belongings home in suitcases she avoids having to ship them back in a crate in a process that can take up to two months.

The cardboard boxes stamped with the Samsonite brand name were dropped off while Rooney was at training.

Children’s high chairs and cots were also seen being loaded into a removal van.

Rooney’s agent Paul Stretford was also pictured at the house – with sources close to the star saying he was there to tie up loose ends from his £10 million DC United contract. 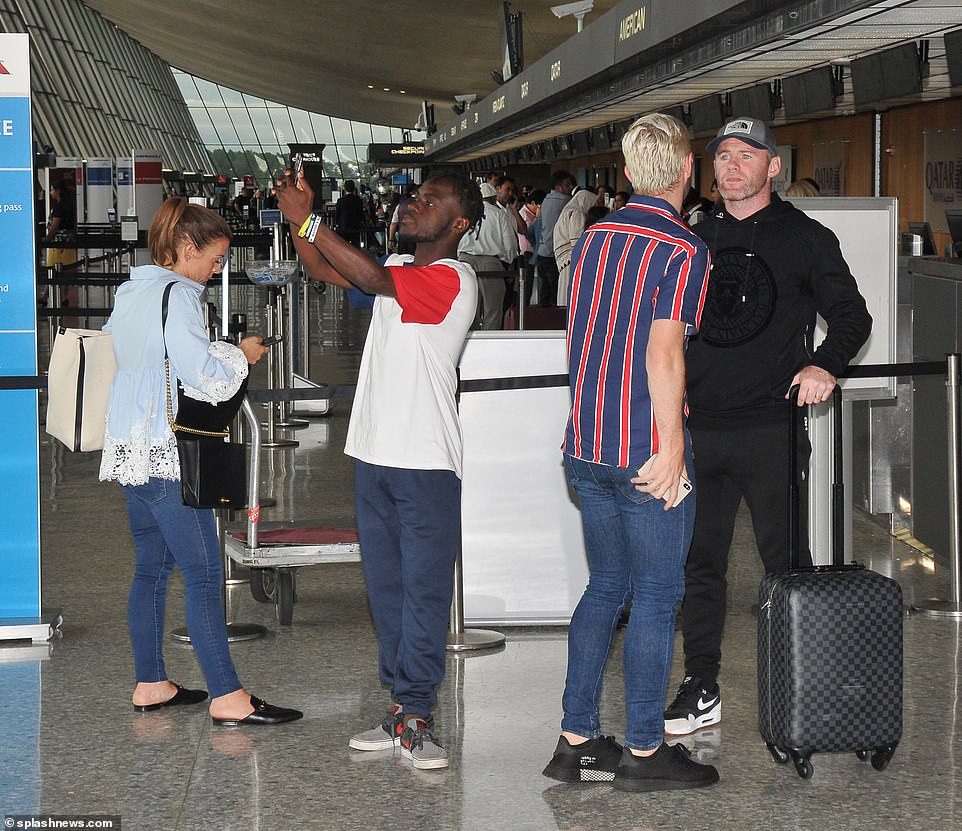 At one point a football fan posed for a selfie with the footballer, who did not engage and remained engrossed in conversation with the man in the striped shirt 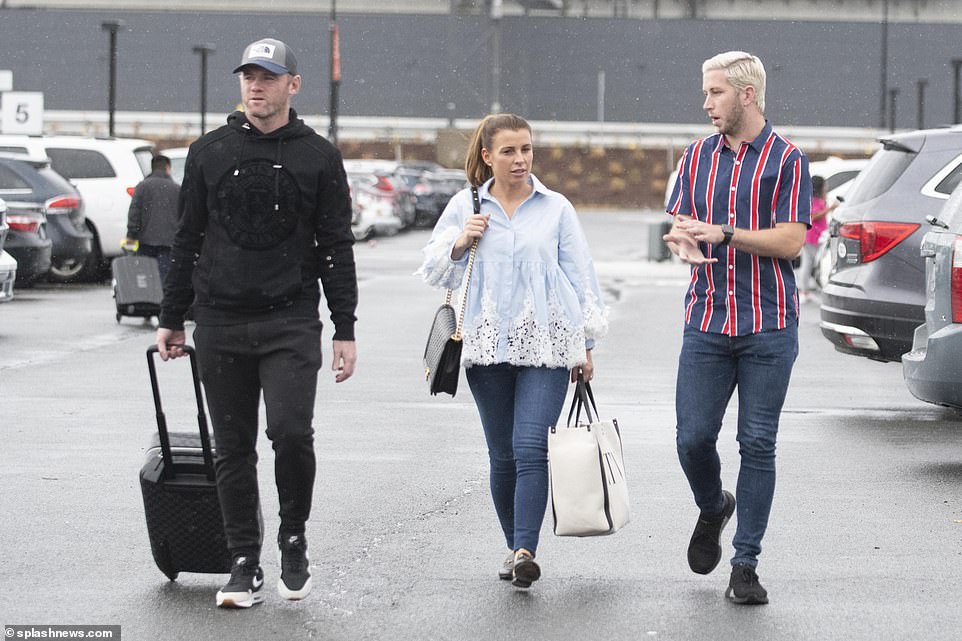 Rooney, pictured with his wife and their associate outside the airport, only joined DC United in 2018 but his family is understood to be keen to head back to the UK 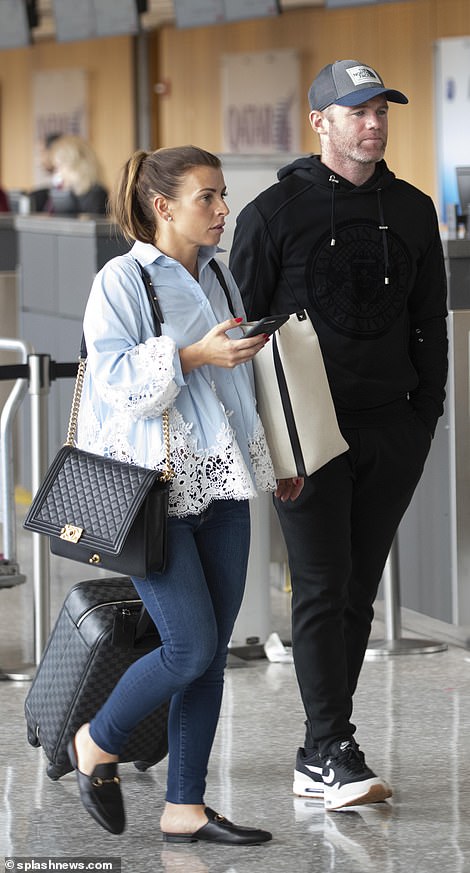 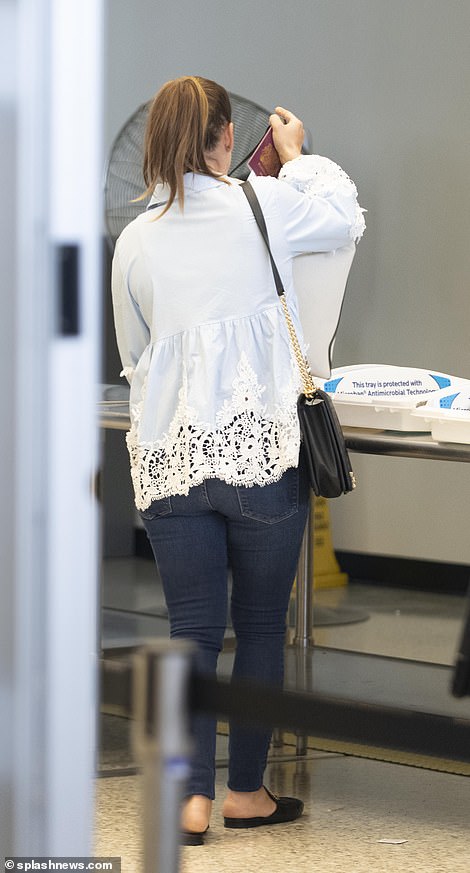 Coleen, pictured left and right in the airport, wore a baby blue blouse featuring cut-out lace detailing on the hem and sleeves accessorised with a black leather handbag with a gold chain strap. She paired simple figure-hugging skinny jeans with a pair of Gucci Princetown horsebit-detailed leather slippers which cost some £515 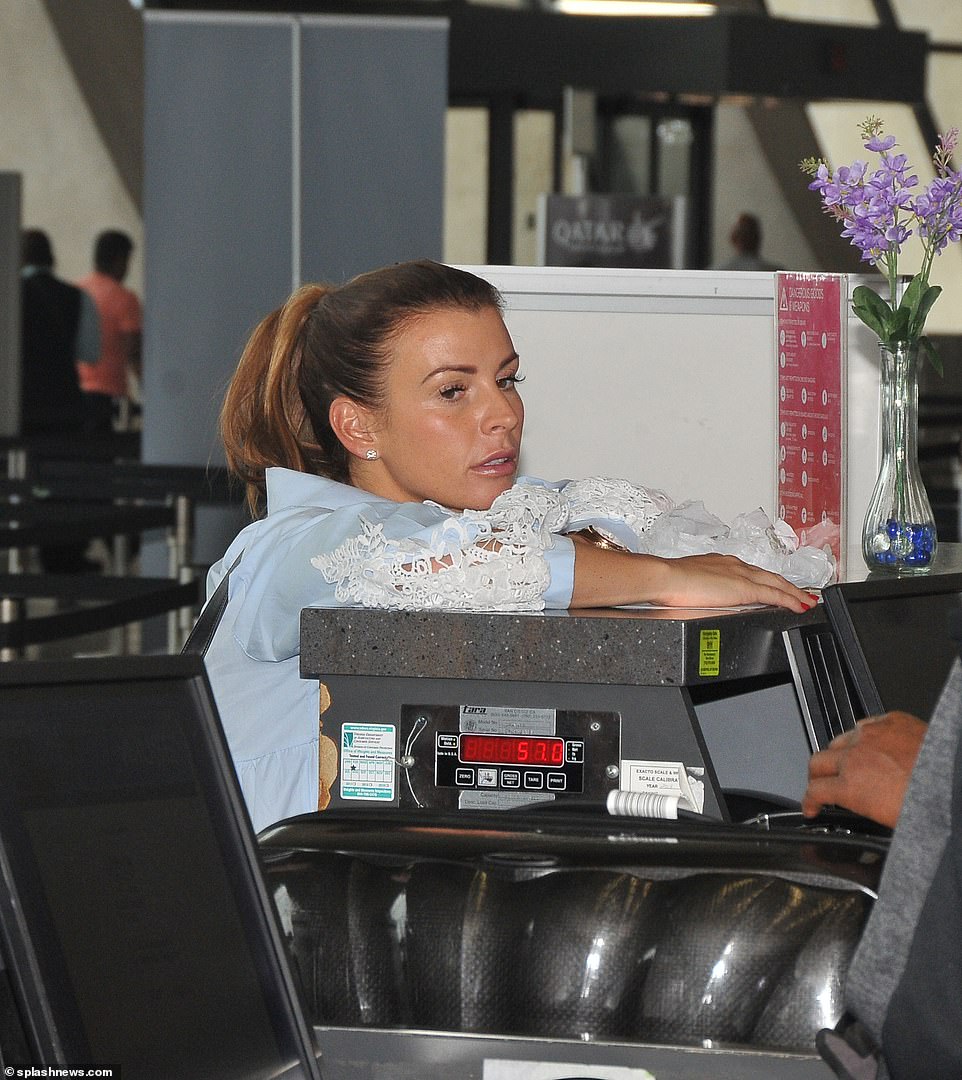 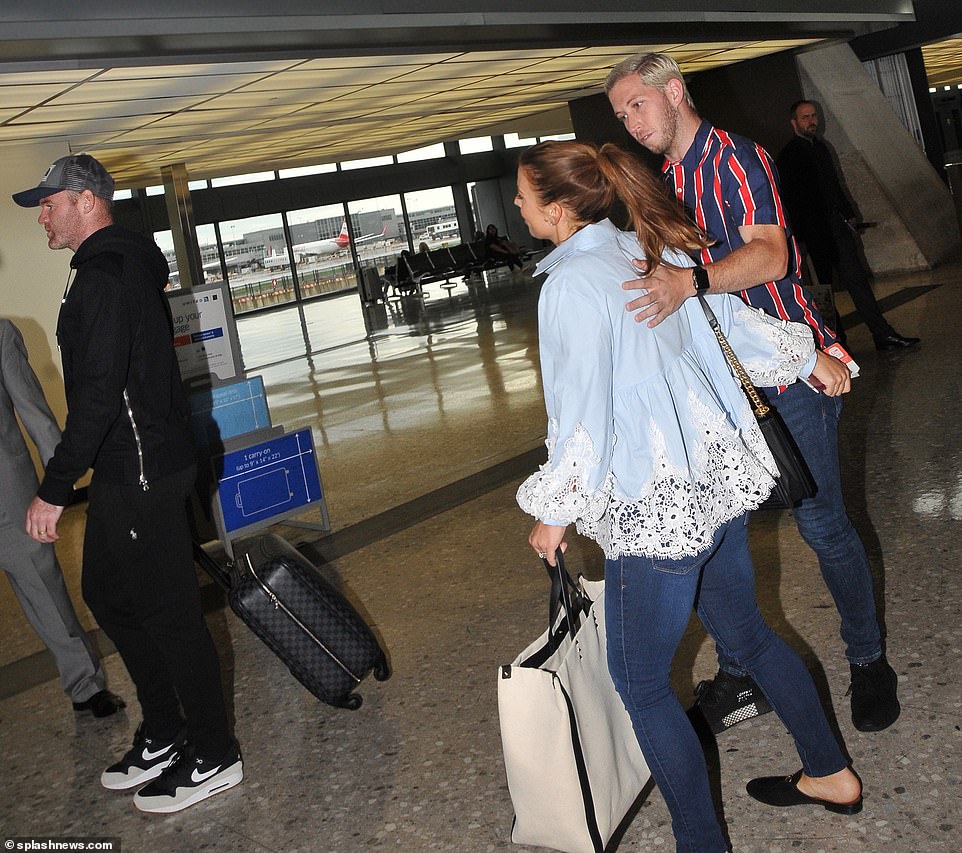 Rooney, 33, was in Vancouver with his current side DC United, which he is due to quit at the end of the MLS season to join Derby County as a player coach.

The photographs showed the striker with his arms around a mystery brunette inside one of two nightclubs he visited, before joining her in the back of a car.

Later, the football ace is seen getting in a lift with a different woman, who was dressed in a white jumpsuit, at his team’s Vancouver hotel. Sources close to Rooney suggest he was with another player at this time.

The photographs led to a source telling The Sun that Rooney’s wife Coleen had ‘read him the riot act’ – and she was later spotted without her wedding ring while shopping near their home in Cheshire.

She reportedly removed it after demanding the former England striker go to rehab to stop drinking. 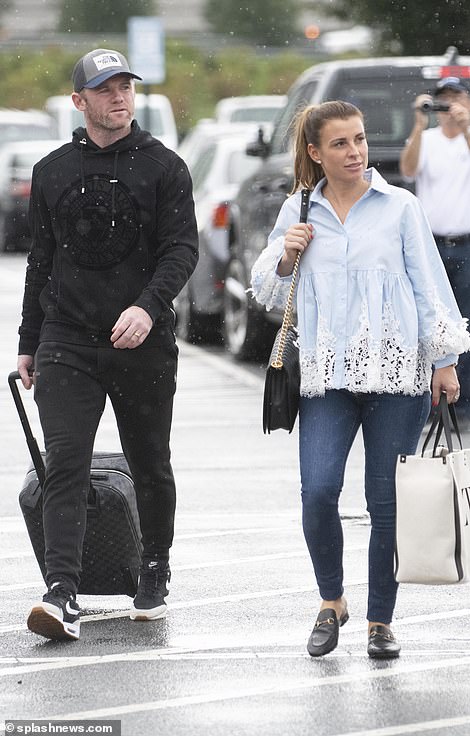 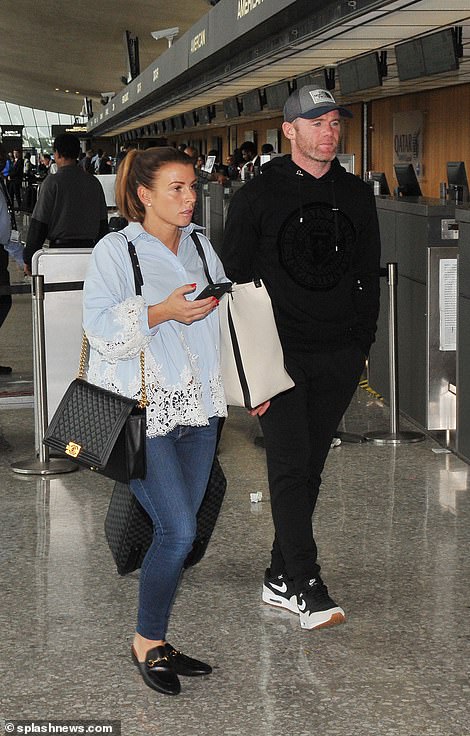 Sources say Coleen ‘read Wayne the riot act’ following his night out in Vancouver and has ‘demanded he go to rehab’. The couple are pictured together left and right at the airport 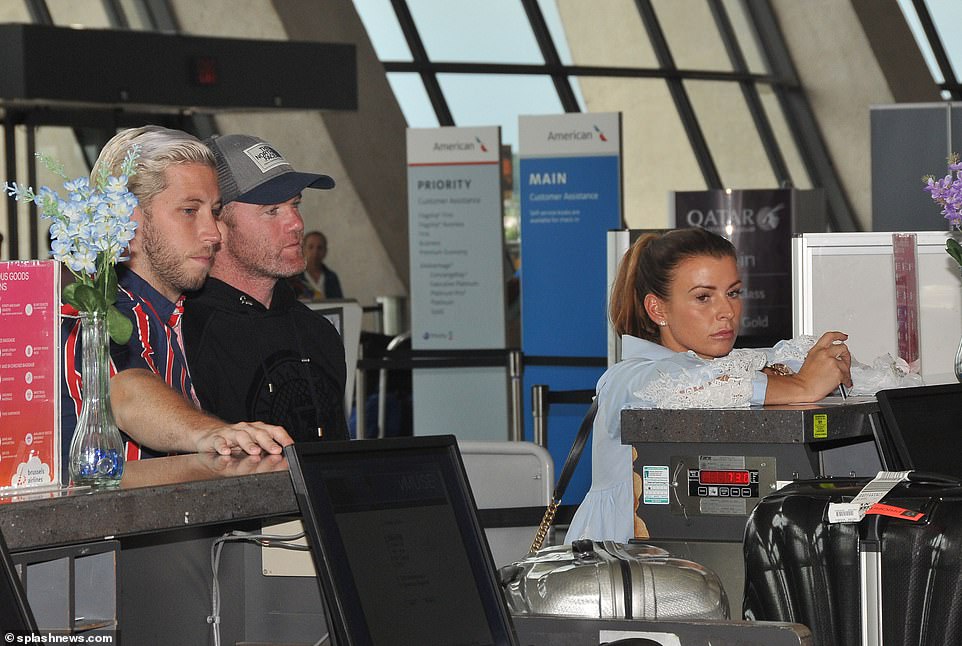 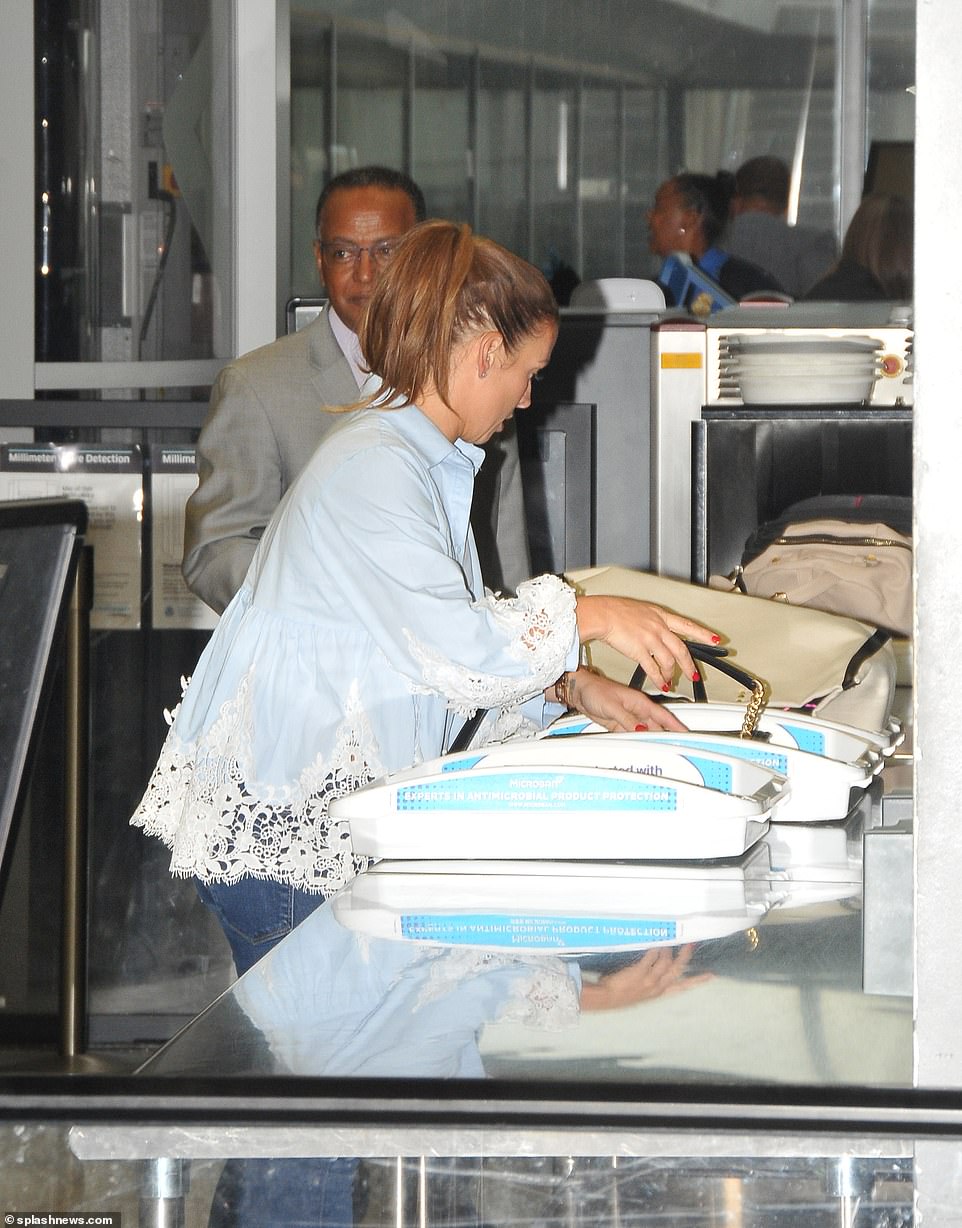 Coleen was pictured with several security trays as she made her way to the check-in gate, with one containing her black bag with gold chain 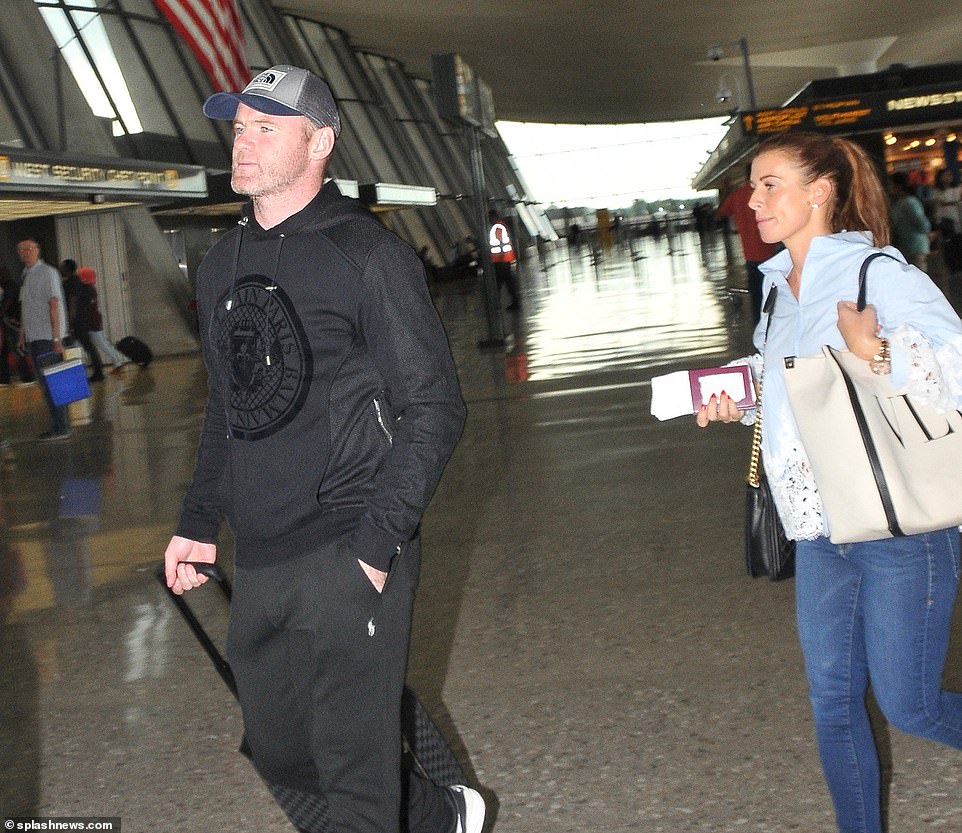 Reports surfaced recently that the father-of-four, pictrued with Coleen in the Washington airport, vowed to go teetotal and have counselling to help him stay dry in a bid to save his marriage 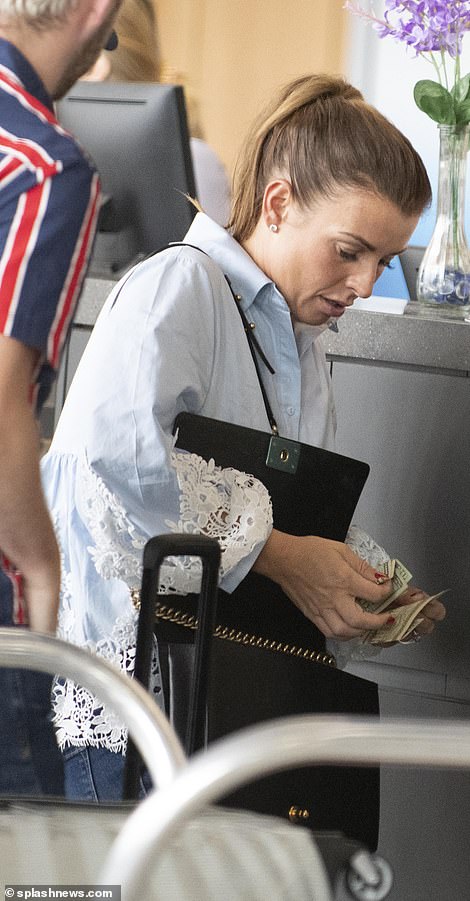 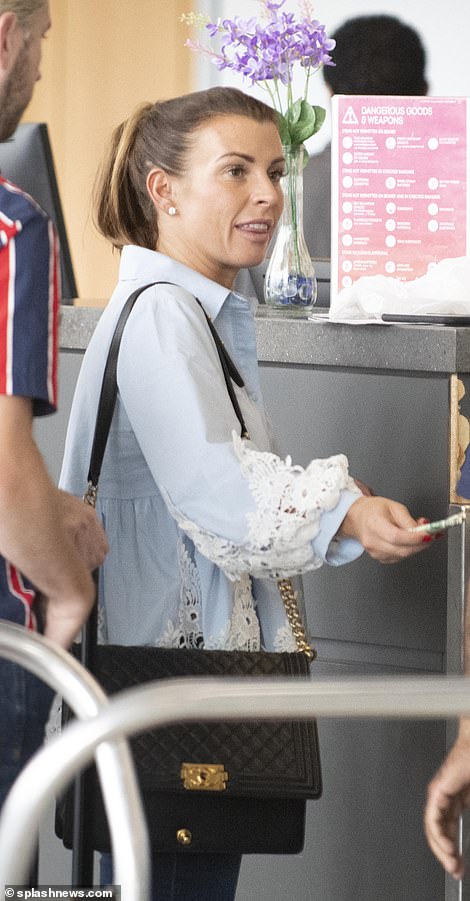 Reports surfaced recently that the father-of-four vowed to go teetotal and have counselling to help him stay dry in a bid to save his marriage, but it appears he broke this promise during the celebrations last Sunday.

Coleen has spent several months in the US capital after her husband signed for the Washington club in 2018.

But after moving back to the UK earlier this year with her four children – and with Wayne due to leave at the end of the year to join Derby County – she has now decided to take her belongings home.

Builders are racing to complete the Rooney’s £20million mansion in the heart of the Cheshire countryside.

The mega home – which has been unkindly compared in looks to a Morrisons supermarket – has been under construction for almost 30 months.

The lavish property will boast six bedrooms as well as a snooker room and indoor swimming pool. 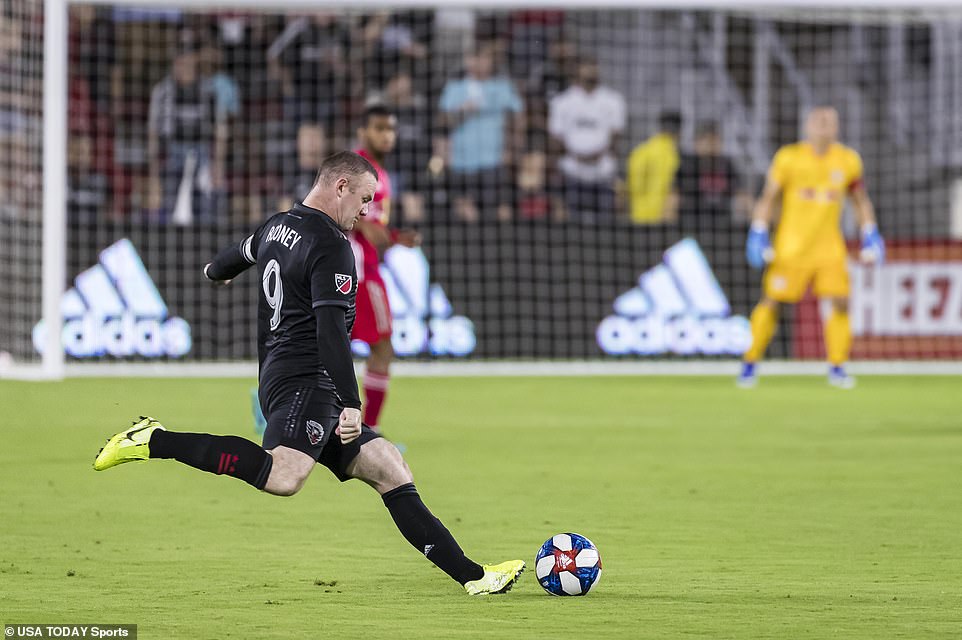 Rooney (pictured playing against the New York Red Bulls last week) chatted to a mystery woman who  knew who he was. A source said the pair ‘spoke intensely’ for ‘long periods’ 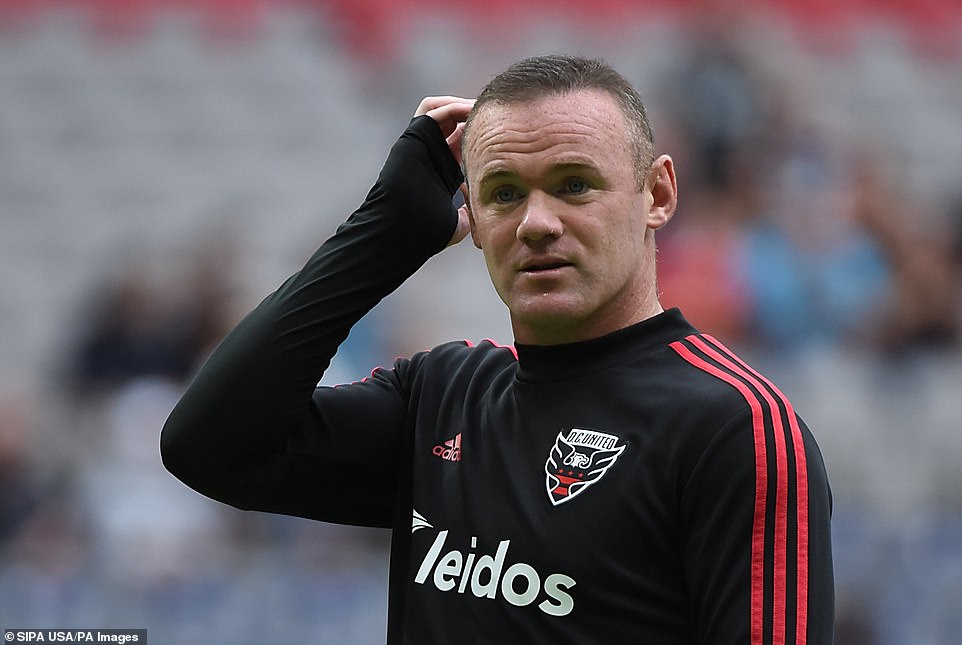 The Manchester United record goal scorer has been involved in a string of controversies involving alcohol, including an arrest for public intoxication at Dulles International airport in Washington DC last year.

He had a court appearance for drink driving in 2017, when he drove party girl Laura Simpson, 30, in her VW Beetle in Cheshire while three times over the limit.

He was handed a two-year driving ban and 100 hours of unpaid community work, apologising for an ‘unforgivable lack of judgement’.

Coleen, then pregnant, and their other three sons, Kai, Klay and Kit, were on holiday in Spain at the time.

In December he was taken into custody at Washington’s Dulles airport, saying he was left ‘disorientated’ by prescribed sleeping tablets he took on a flight while drinking.

He received a statutory automatic fine and was released shortly afterwards at the airport, a spokesman for Rooney said.

In 2016 he was at the centre of another drinking row at a wedding reception between England games, later apologising ‘unreservedly’ for his behaviour. 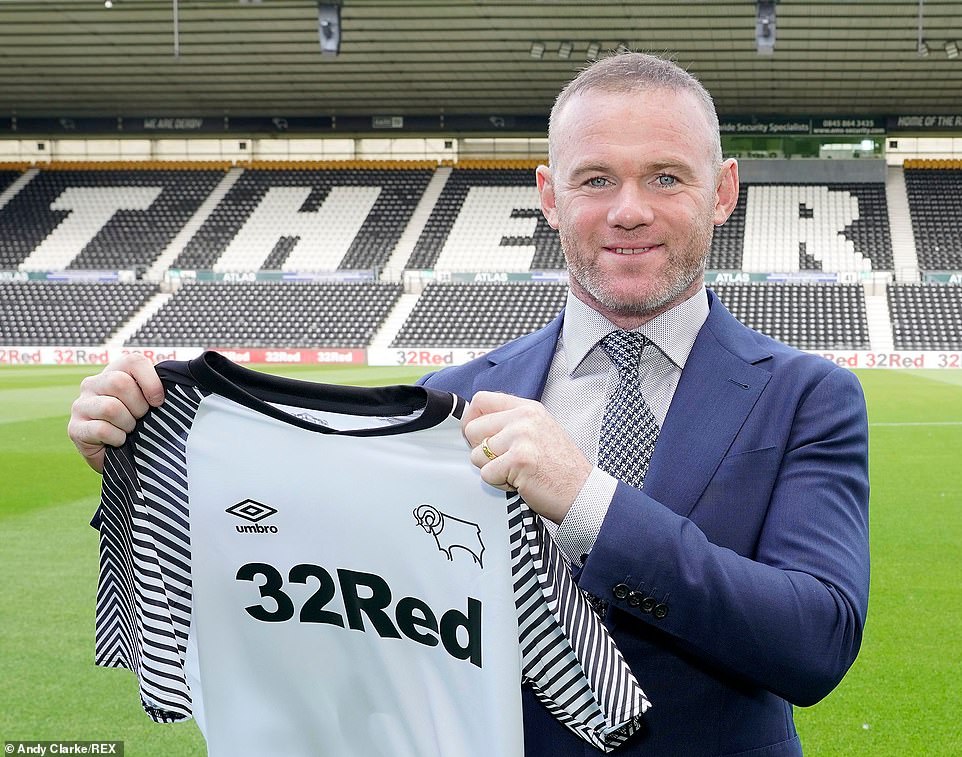 Rooney is moving back to England to join Derby County, where he will wear this controversial shirt advertising a betting firm 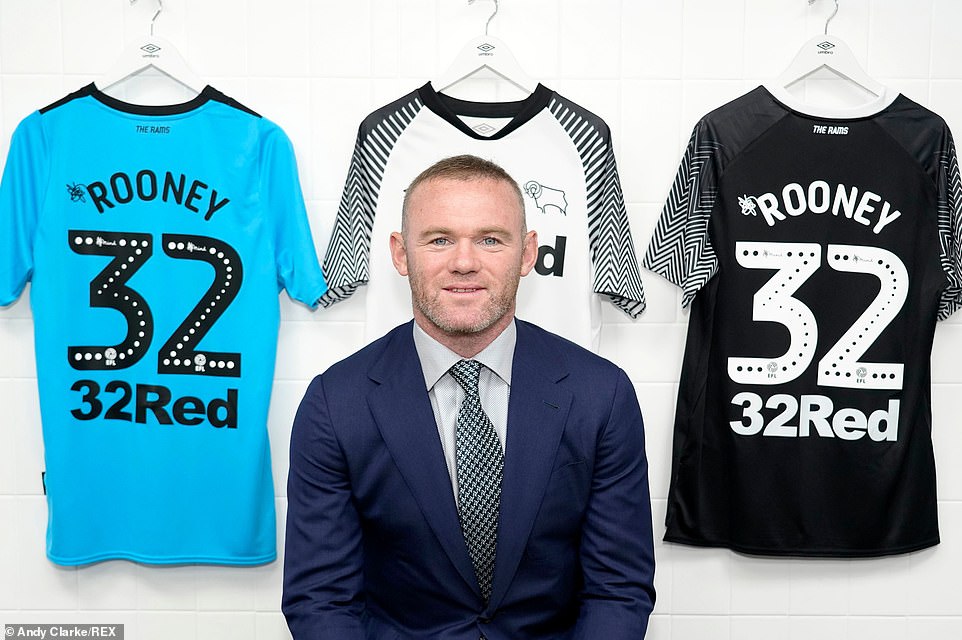 Rooney’s image was used alongside ’32’-branded posts on social media, and he will work with the casino on ‘community initiatives’ as part of the deal (pictured, Rooney with his new number 32 shirts)

It was reported in April 2017 that he had been seen drinking at least five pints of Stella at a Cheshire pub on a night out.

His move back to England has also been irked by controversy, with the club urged to consider abandoning its sponsorship tie-up between Rooney and the online casino 32Red.

Sports minister Nigel Adams said putting the striker in the number 32 shirt in order to promote the Gibraltar-based betting company was a ‘very crafty move’.

His image was used alongside ’32’-branded posts on social media, and he will work with the casino on ‘community initiatives’ as part of the deal.

The club has refused to backtrack after being criticised by the Church of England, MPs and one of the NHS’s top psychologists.