A private school which collapsed into administration in the coronavirus crisis has demanded parents pay for summer term – or forfeit their children’s GCSE results.

HawleyHurst school in Hampshire gave parents and staff two hours notice when it closed at the end of March.

Owned by the millionaire founder of The Eden Project, Sir Tim Smit, and his sister, Victoria, it went into administration last month, with HMRC claiming it is owed money.

But last week parents were stunned to learn they were being billed for the summer term, despite staff being made redundant.

HawleyHurst private school in Hampshire, pictured above, which has collapsed into administration and demanded parents pay for the summer term (file photo)

And in an email sent by Victoria Smit, who has been the school’s principal for 30 years, they were warned children would miss out on exam results if they failed to pay.

One mother of a GCSE pupil, who asked not to be named, said: ‘We feel like we’re being held to ransom. The school’s attitude has been absolutely disgusting.

‘Everyone understands this is a hugely difficult time but there’s no compassion or flexibility. They don’t want to talk or engage with parents, they just want our money.’

HawleyHurst, which is on the Hampshire-Surrey border at Blackwater near Camberley, closed on March 26, with Ms Smit warning parents of a £600k hole in the school’s finances.

‘Coronavirus has had a hugely detrimental impact on our ability to continue, with fee income stopped in its tracks and no safety net available from Government,’ she wrote.

With GCSE and A Level finals cancelled amid the Covid-19 pandemic, exam regulator Ofqual has tasked teaching staff nationwide with grading pupils’ work, and Ms Smit told parents that HawleyHurst was ‘fully participating’ in submitting data to the Department for Education.

But after parents questioned the school charging them £4,862 at a 20 percent discount, £3,900, for Year 11 pupils’ final term, she wrote again last Tuesday, warning: ‘We only put students forward for external examinations that are on roll with the school.

‘If you have not paid your fees, your child is not considered to be on roll and, as such, they would not be put forward for data submission in line with protocol.’

She added: ‘We are doing everything in our power to support our students at this very difficult time and would ask that fees be paid timely so as to avoid further disruption to the students.’

The parent responded: ‘Of course we appreciate that having staff assess our children’s work is going to incur a cost, no one expects teachers to work for free – but almost a full term’s fees?

Sarah Ferguson, the Duchess of York (left) and English actress Juliet Stevenson, right, who attended the school in Hampshire, which closed at the end of March

‘My child is devastated to be missing out on the experience of sitting exams. We’ve all been through it and it’s such an important part of a school leaver’s life.

‘But I haven’t had as much as a single phone call from HawleyHurst to ask how my child is doing or feeling.’

Parents took to social media last month to launch a ‘Save HawleyHurst’ GoFundMe campaign, with many blaming the Covid-19 pandemic lockdown for the school’s financial hardship.

But a notice filed online at the Gazette shows Her Majesty’s Revenue and Customs (HMRC) petitioned the High Court in February for a winding up order, claiming it is owed money.

The claim was due to be heard on March 25 but has now been postponed until August.

Joint administrators Quantuma say they are seeking a buyer for the school.

But it is understood they have contracted another education company also owned by Sir Tim and Victoria Smit – Teedown Ltd – to employ teachers to work on exam grade assessments.

In a Facebook thread which has since been removed, the charity fundraising effort – which secured just £40,330 of a £200,000 target – was questioned by some who pointed to Sir Tim’s personal wealth.

The 65-year-old Dutch-British businessman worked as an archaeologist before embarking on a platinum-selling career in the music industry as a writer and producer. 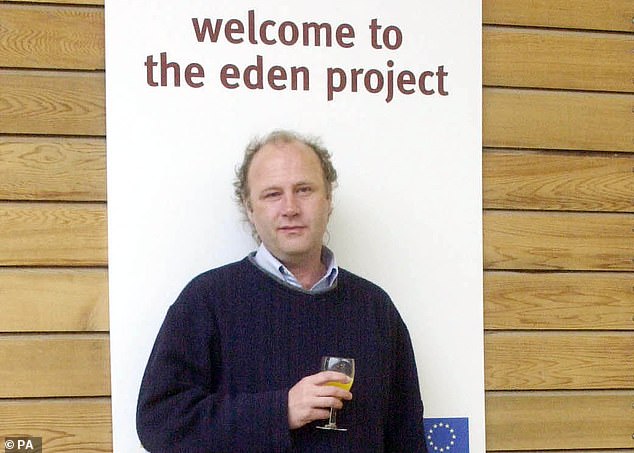 Chief Executive of the Eden Project Sir Tim Smit, who owned the school which went into administration last month, with HMRC claiming it is owed money (file photo, pictured in 2000)

In 2015 he bought the defunct Lostwithiel golf course, and he added to his property portfolio in 2018 with the purchase of Charlestown, a 23-acre Georgian harbour used as a location for BBC’s Poldark.

Specialising in performing arts, former pupils included the actress Juliet Stevenson, who attended in the 1960s. Sarah Ferguson, the Duchess of York, left in 1977.

The Smit family acquired the school in the late 1980s, with Sir Tim, Victoria and their late mother, Anthea, becoming directors. In 2001 it was listed in a round-up of private establishments as the third most expensive preparatory school in the UK.

In 2018 the Smits merged Hurst Lodge with another independent school, Hawley Place, on the Hampshire-Surrey border at Blackwater near Camberley, renaming their new venture HawleyHurst.

The nursery, prep school and Victorian school house are set in 16 acres of gardens and woodland. They cater for 280 children aged 2-19, out of a maximum capacity of 450, with over 160 of their pupils having special needs.

MailOnline has contacted Quantuma and the school for comment.