Two California college sophomores had a Parent Trap-esque moment when they discovered that their mothers were long-lost best friends who hadn’t seen each other in 16 years.

When Nissma Bencheikh, 19, and Roaya Jannatipour, 18, first met at the University of California, Berkeley, they had no idea that they shared so much more in common than their Canadian and Moroccan roots.

However to their utter astonishment, they eventually learned that they actually shared an incredibly close bond – and a shared history – through their mothers, who had once been incredibly close while both living in Canada, something which they didn’t realize until after a whole year of college together.

Parent trap: College sophomores Nissma Bencheikh, 19, and Roaya Jannatipour, 18, were shocked to learn that their parents were long-lost best friends and that they grew up together 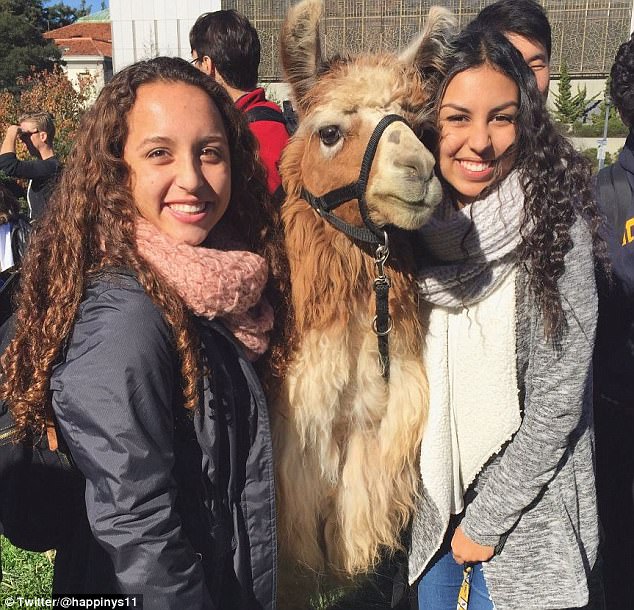 Fateful friends: The duo became roommates in their sophomore year and made the discovery when their parents met via FaceTime and connected the dots from there 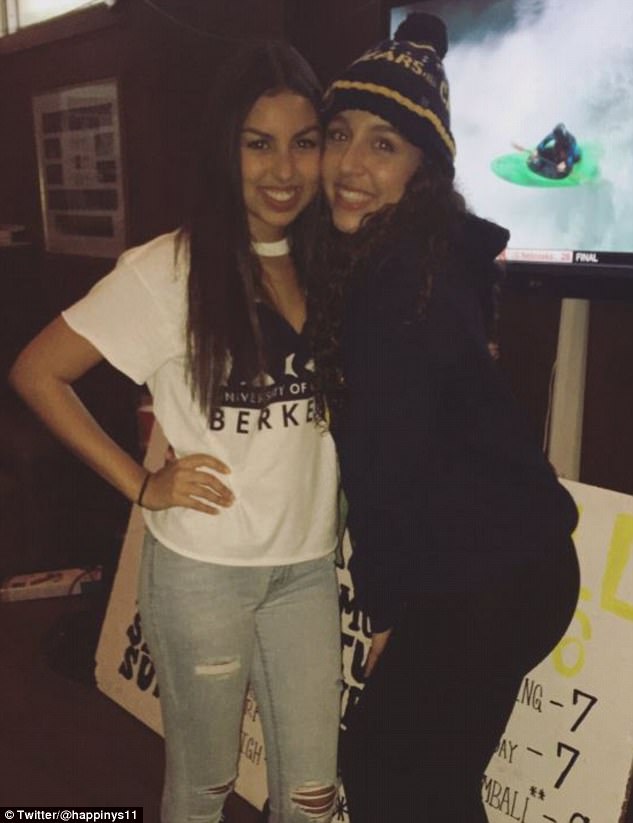 Deep roots: The girls bonded at first because of their common Canadian and Moroccan roots, not realizing their connection ran much deeper in history and time

The college girls met during their freshmen year at the University of California, Berkeley and became fast friends, after being introduced by a mutual pal, initially hitting it off thanks to their similar backgrounds and common pre-med career path.

‘I found out she was from Virginia, and that, coincidentally, was also Moroccan and Canadian like me!’ Roaya wrote on Twitter in a thread raving about the serendipitous reunion.

From sitting alongside one another in class to hanging out during their spare time, the two were attached at the hip their freshman year.

‘We sit together in our Chem lecture all semester, go to brunch, lounge on the glade, and decide to be roommates next year,’ Nissma added in her own Twitter thread.

But it wasn’t until sophomore year when the pals decided to become roommates and moved into their new apartment that the connection was finally made.

Roaya Facetimed her mother and thought she’d introduce her to Nissma’s father who was helping them move in.

The parents chatted on the phone for a while before he began asking the girls about Roaya’s father and family background.

‘Oddly, he already knows what I’m about to say…he calls Roaya out and asks her dad’s name. When she answers he says “I KNOW YOUR PARENTS,'” Nissma wrote.

The father explained he attended McGill University 18 years ago with Roaya’s father and that the two families were not just neighbors in Montreal, but the best of friends.

‘Turns out Roaya and I’s families were best friends and neighbors in Montreal Canada 16 years ago,’ Nissma said. 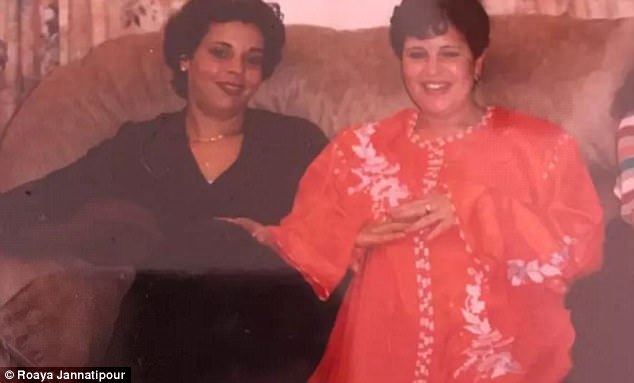 Reunited! Moroccan mothers Naima Souissi and Saida Chehbouni are long-lost best friends who rediscovered each other after 16 years when their daughters became college roommates 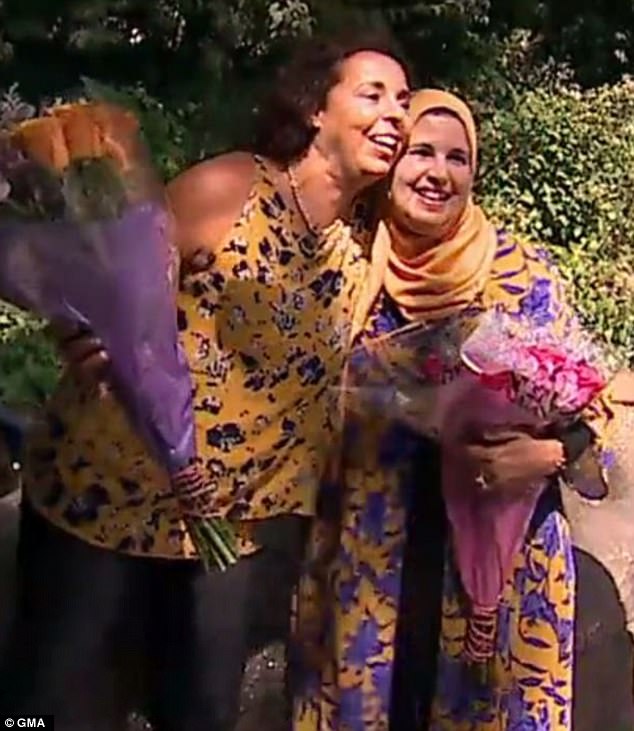 Happy reunion! They tearfully reunited on Monday in New York City after their story went viral 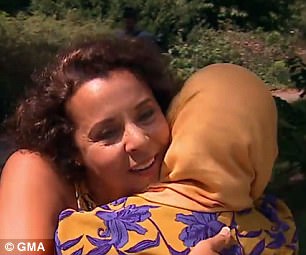 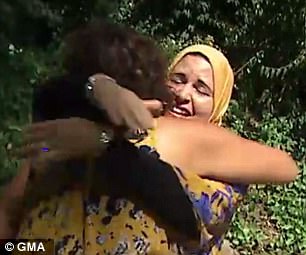 Sisters forever: The women cried and called one another sister in a long, weepy embrace 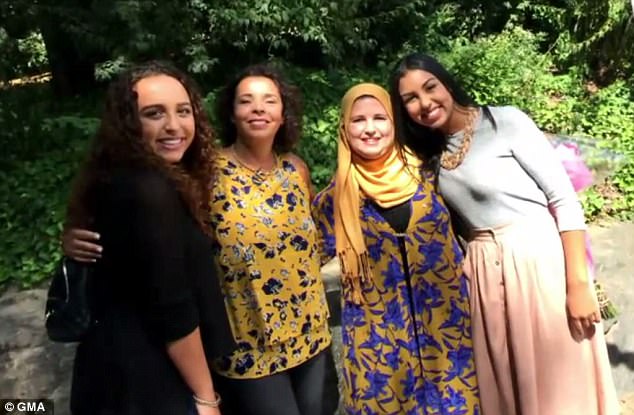 ‘The whole family is together!’ The best friends smile with their daughters, who also became best friends, after over a decade of not seeing each other

Their mothers, Naima Souissi and Saida Chehbouni, had a close relationship. They went to college together and were pregnant at the same time.

Their friendship, however, was put on hold when Roaya’s family moved from Montreal to Irvine, California, and Nissma’s family headed to Virginia over a decade ago.

But thanks to that fateful Facetime call, the parents re-met each other and discovered the connection.

The moms finally reunited in New York City this week after over a decade apart.

In a heart melting video the daughters bring their mothers  to Manhattan on Monday to surprise them with a reunion orchestrated by ABC.

‘They went to university together, they lived down the street from each other, used to talk, used to have dinner,’ Roaya explained on the moms’ close relationship.

After so much time apart, the two were clueless about the get-together awaiting them in Central Park. When they finally saw each other, they laughed and cried as they embraced for the first time in 16 years.

‘I missed you so much,’ Roaya’s mother Saida, said.

‘She’s like my sister. She’s my best friend and my family,’ Nissma’s mother Naima fondly added of her friend.

The two held on to each other and repeated ‘oh my god’ and hugged each others’ daughters.

At the end Saida exclaimed, ‘The whole family is together!’

The duo lost touch without the help of the internet or cell phones but their daughters were the key to their reunion, years later, in the most unexpected of circumstances. 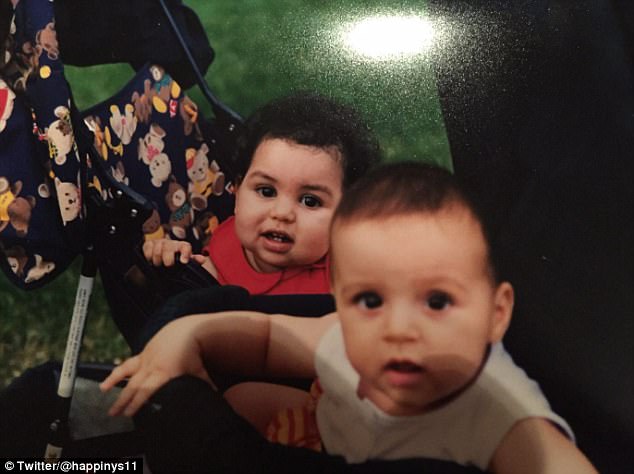 Little Einsteins: Roaya (right) and Nissma (left) were shocked to discover that the roommates  even have baby photos with together from their childhood in Montreal 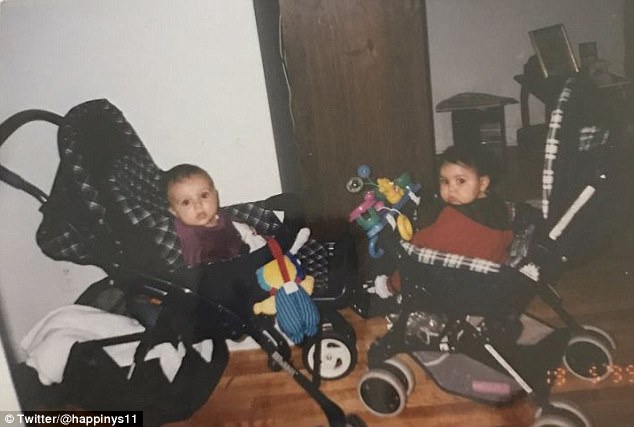 Two peas in a pod: Their mothers went to college together and were pregnant at the same time and the two played together as babies (Roaya, left, Nissma, right) in their Canada homes 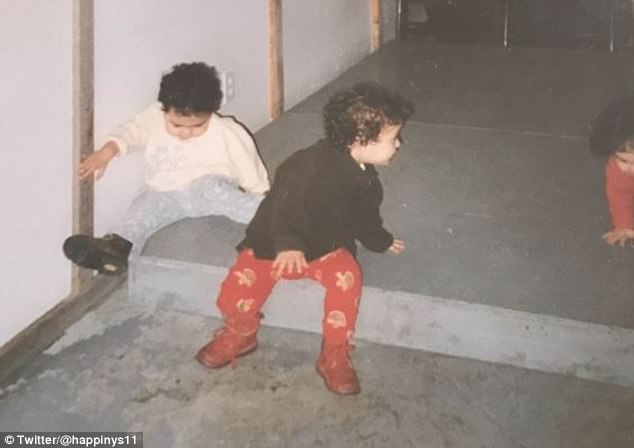 Child’s play: Although the girls can’t remember, their best friend mothers showed them plenty of proof of their childhood games together  (above)

The two friends, soon realized that they didn’t just meet for the first time at university, but used to play together as babies.

But their relationship was much closer than just friendship. Roaya’s mother Saida was in the delivery room for Nissma’s sisters birth and even cut her umbilical cord.

‘and even crazier…her mom not only cut my sister’s umbilical cord at birth but also named her,’ Nissma tweeted.

‘This is insane. How often do you find out that one of your best friends as a young adult you actually have baby pictures with that you don’t even remember?’ Nissma said to ABC.

Just when it couldn’t seem to be more fateful, Roaya revealed that both girls almost didn’t even attend Berkeley.

‘Both of us almost didn’t go to Berkeley, but decided to go last minute,’ she said.

‘I am screaming this world is so unbelievably small!!!!’ she added.

Surprise! Nissma also shared the story, revealing their Parent Trap like scenario to the internet

Heartbreak: She revealed that the families lost touch after they moved to different cities

Almost missed the mark: The girls also admitted that both of them almost chose to attend different colleges, but last minute chose Berkeley, where they became roommates

Despite the passing of years and time the parents still thought about each other, with Roaya’s mother searching for her best friend, Nissma’s mother, on Facebook for the last 20 years.

The girls soon learned that their mothers, Naima and Saida went to college together and were even pregnant at the same time.

Despite the coast to coast separation, fate brought the families back together, after they lost contact for over a decade.

Nissma shared to ABC, ‘a best friend is a best friend even when 16 years pass,’ on the parents’ get-together.

‘When you have such a deep profound connection with somebody, that’s something no one ever wants to lose…so being able to rekindle that…it’s just going to be very sentimental for them,’ Roaya added.