A college student may have turned her professor into a One Direction fan after making a joke to her friend that was accidentally overheard by her entire online class.

Kayla Morris, a 20-year-old student at Randolph College in Virginia, opened up about the embarrassing snafu in a now-viral TikTok video, saying it all started when her math teacher, Dr. Marc Ordower, wrote 1-D on the board while talking about dimensions.

‘So I sent a video to my friend saying: “One dimension? More like One Direction,”‘ she explained, but things got a little awkward when her friend forgot to mute himself when he played the clip during class.

Whoops! Kayla Morris, a 20-year-old student at Randolph College in Virginia, opened up about her math professor, Dr. Marc Ordower, overhearing her One Direction jokje 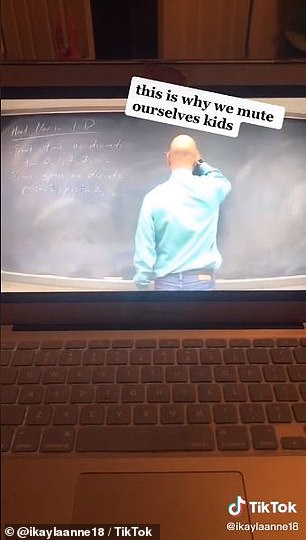 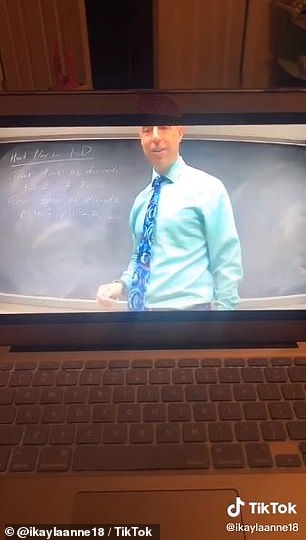 Joke: She explained that when her teacher wrote 1-D on the board in reference to dimensions, she sent a video to her friend, saying: ‘One dimension? More like One Direction’

‘Yeah, one dimension,’ their teacher said, thinking someone was asking a question. ‘Who’s talking? Did I make…’

Another student interjected to say it was ‘a joke?’ and he should ‘just keep going,’ but he was still perplexed.

‘I hate missing jokes,’ he said.

The teacher stared at the 1-D written on the chalkboard for so long that his students thought their screens were frozen, but he was just trying to figure out the joke.

‘Is 1-D a symbol for something? Is that the joke,’ he finally asked. 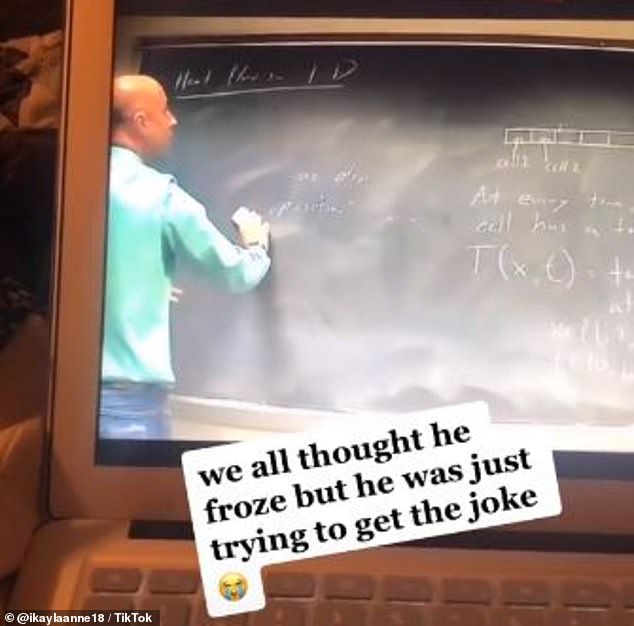 Confused: The professor stared at the 1-D written on the chalkboard for so long that his students thought their screens were frozen, but he was just trying to figure out the joke 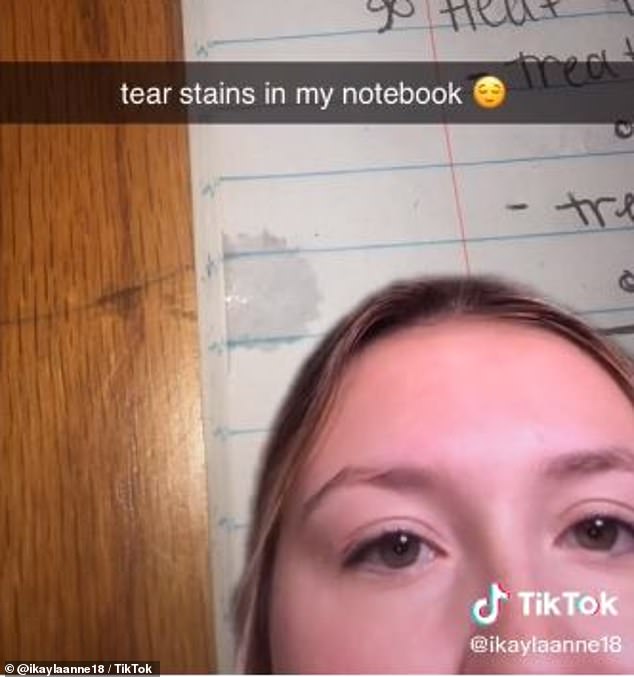 Awkward: Kayla admitted she cried during class because two guys were ‘roasting’ her joke 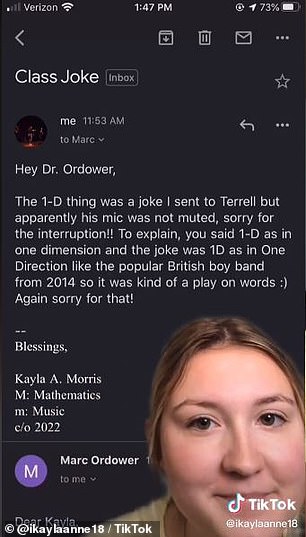 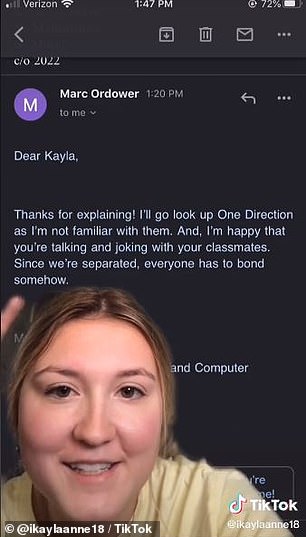 It’s all okay: In a follow-up video, Kayla shared her email to her teacher and his response 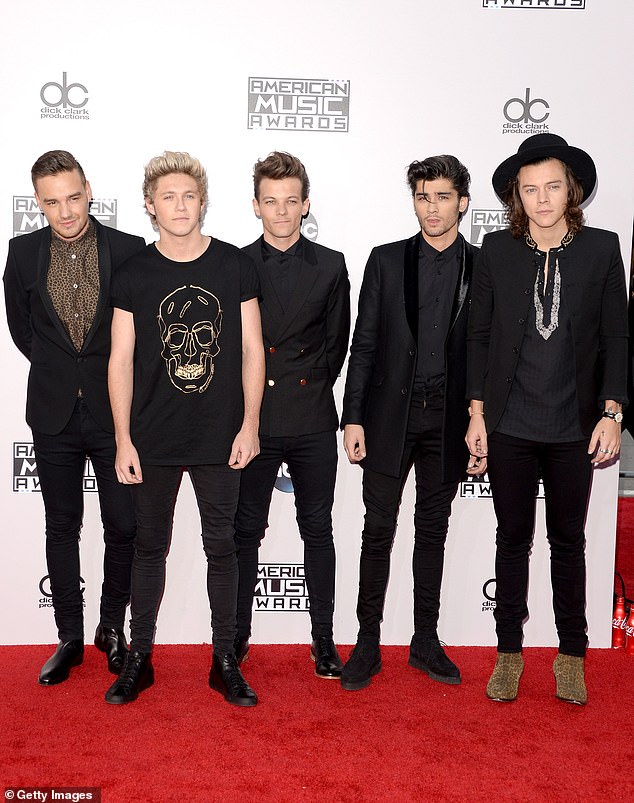 The video has been viewed more than two million times, and because so many people wanted to know what happened, she made a follow-up TikTok.

Kayla explained that the situation wasn’t really her fault because her friend was the one who forgot to put himself on mute, but it was still embarrassing because there are only about nine people in the class.

She tried to explain it to her professor during class, but two guys ridiculed her for the ‘outdated’ joke and dismissed her.

‘My joke was getting roasted. I was sitting there crying, and it was just a mess,’ she said, but her professor had a kindhearted reaction to what happened.

After she emailed an explanation, he responding, writing: ‘Thanks for explaining! I’ll go look up One Direction as I’m not familiar with them. And, I’m happy that your talking and joking with your classmates. Since we’re separated, everyone has to bond somehow.’ 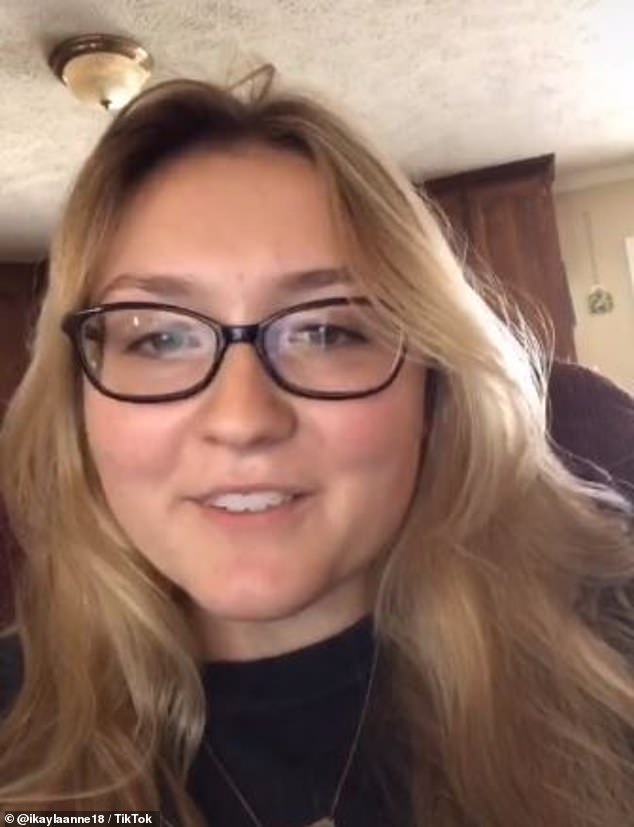 So wholesome: In a third video, Kayla shared that Dr. Ordower started their next class listening to One Direction’s ‘Story of My Life’ 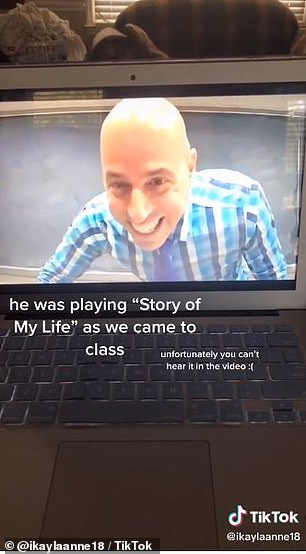 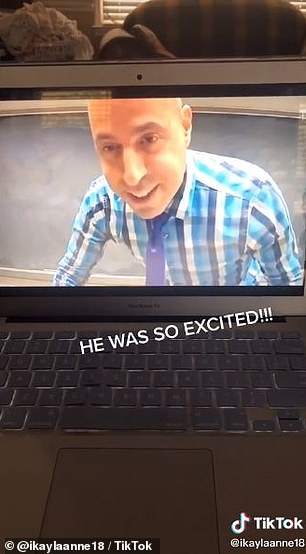 Aww: ‘I looked it up. This was the one I liked the best,’ he said of the song. He was also excited to hear her TikTok video about their class went viral 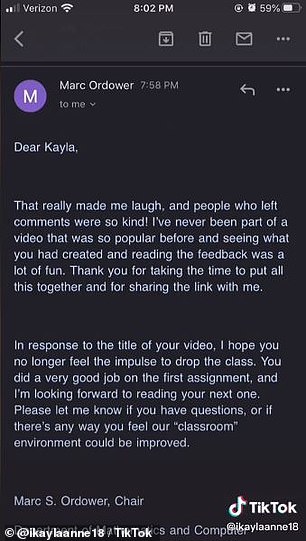 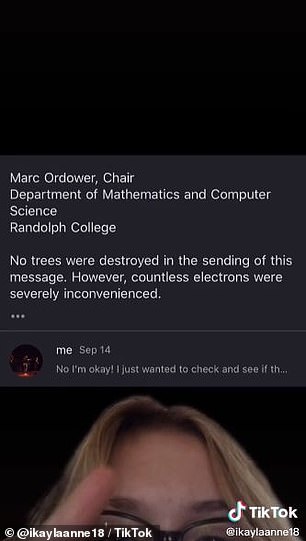 Online star: Kayla also shared the email he sent her about the viral video and his signature

To Kayla’s surprise, Dr. Ordower was listening to One Direction’s ‘Story of My Life’ when he started class the next day.

‘I looked it up. This was the one I liked the best,’ he said of the song.

She then told him that her TikTok video has gotten over a million views and ‘everybody loves [him].’

‘Holy crap! That does sound like a lot,’ he replied. At the end of class, he told his students: ‘Thanks for the introduction to One Direction.’

Kayla also shared the email he sent her about the viral video.

‘That really made me laugh, and people who left comments were so kind!’ he wrote. ‘I’ve never been part of a video that was so popular before and seeing what you had created and reading the feedback was a lot of fun. Thank you for taking the time to put all this together and for sharing the link with me.’

‘Thank you for enjoying my professor. He is really enjoying being a TikTok star,’ Kayla said at the end of the clip.