Collin Morikawa was crowned the winner of The Open at Royal St George’s on Sunday but has long hinted at the secret to his success – his golfer girlfriend, Katherine Zhu.

American Morikawa, 24, who has joined Seve Ballesteros, Tiger Woods and Jordan Spieth as the only men to win The Open in the last 60 years at such a young age, credits Zhu, 25, who was born in Vancouver, British Columbia, for helping him rise to the top of his game.

The loved-up couple, who often gush about each other on social media, have been together since their college days in 2017.

After winning the 149th British Open on Sunday, Morikawa said: ‘This is by far one of the best moments of my life to see everyone out here. I wouldn’t be here without my family, friends, Kat, my girlfriend. They haven’t been able to make the trip but they’ve been getting up early to watch.’

American Morikawa, 24, who has joined Seve Ballesteros, Tiger Woods and Jordan Spieth as the only men to win The Open in the last 60 years at such a young age, credits girlfriend Katherine Zhu (pictured, on holiday recently), 25, for helping him rise to the top of his game 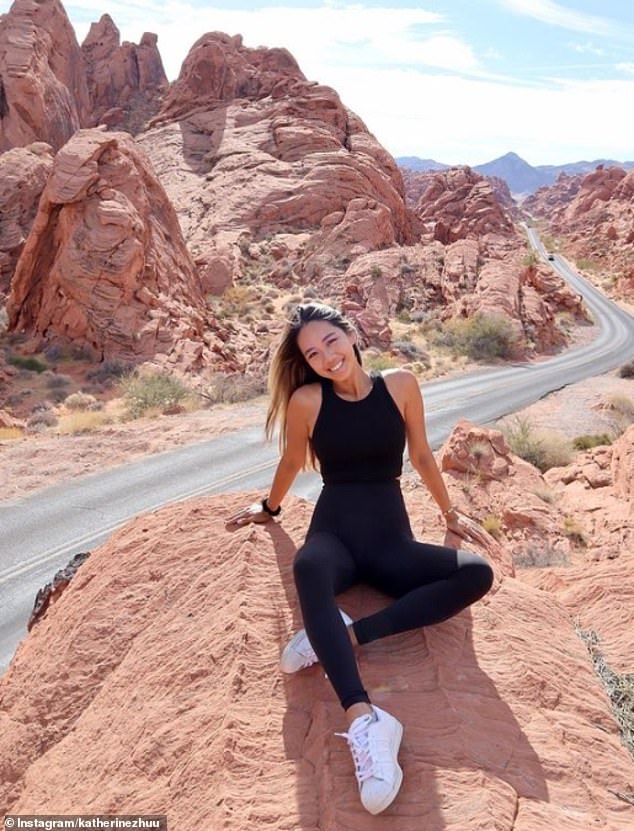 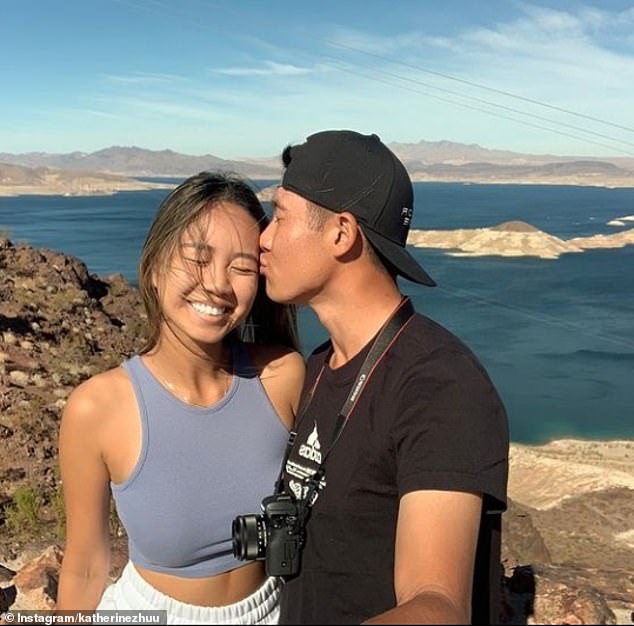 The loved-up couple (pictured, together), who often gush about each other on social media, have been together since their college days in 2017

Meanwhile, Zhu shared a sweet selfie of the pair kissing on a cliff on Instagram and penned: ‘So incredibly proud of you! You’ve accomplished so much since turning pro in 2019 and I really can’t wait to see what’s next.’

And it’s not the first time Morikawa has praised his partner for aiding his success. After winning the PGA Championship in 2020, he told the Golf Channel: ‘Kat has been by my side through it all. She would hate me if I didn’t say this, but I didn’t start winning in college until she showed up in my life, so thanks Kat.’

‘Whenever she’s there, it always just gets me away from golf. She knows how I’m feeling after golf, like you said, she’s played collegiately, she knows golf can take a toll on you, whether it’s a good or bad day. 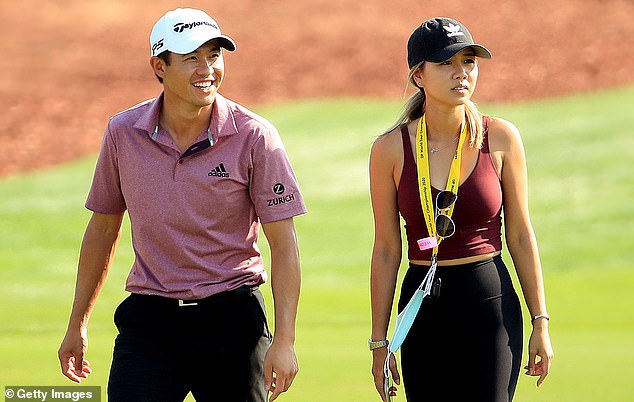 Collin Morikawa of the United States walks with his girlfriend Katherine Zhu during practice for the DP World Tour Championship at Jumeirah Golf Estates on December 09, 2020 in Dubai 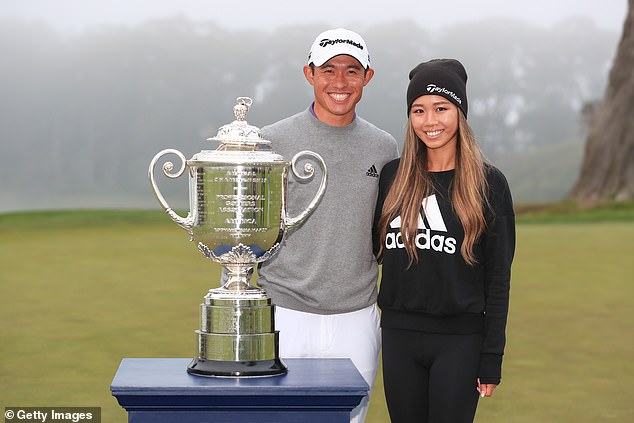 Collin Morikawa of the United States celebrates with the Wanamaker Trophy and girlfriend Katherine Zhu after winning the 2020 PGA Championship at TPC Harding Park on August 09, 2020 in San Francisco, California

‘So she’s on that same swing of if we’re playing well or not well, but, yeah, I’m very lucky to have her. Having someone at dinner makes things a lot nicer than sitting down there at the hotel by myself.’

Zhu’s father, Mike Chu, graduated from Beijing Sport University and was a champion tennis player, but while her attention was at first focused on the same sport, it wasn’t long before her attention turned to golf.

She attended Zhuji Hailiang Private High School in China, before opting to return to North America to attend Pepperdine University.

According to Golf Monthly, Zhu, who boasts almost 50,000 followers on Instagram, chose the school for several reasons: ‘First, I really like Coach Gibbs. I believe all good players have good coaches and I believe Coach Gibbs can help me become a good player.

‘Second, Malibu has great weather conditions, which create a better environment for me to practice. Third, Pepperdine is a small school that is strong in both academics and athletics.’

While she may not quite at the same level as her other half, Zhu was in the collegiate team for four years, played as a division one player and earned multiple WGCA All-American honors, with an impressive scoring average of 76.54. She went on to major in International Management.

The couple met while Morikawa attended the University of California in Berkley, and Zhu was at Pepperdine University. 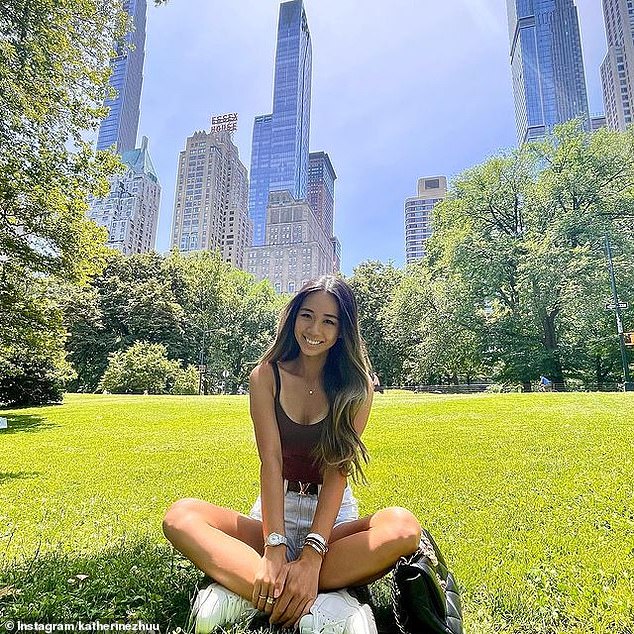 During a video for the PGA tour last year, the couple opened up about their relationship and how both being golf players brought out a competitive nature in their relationship. Pictured, Zhu in Central Park, New York on June 28 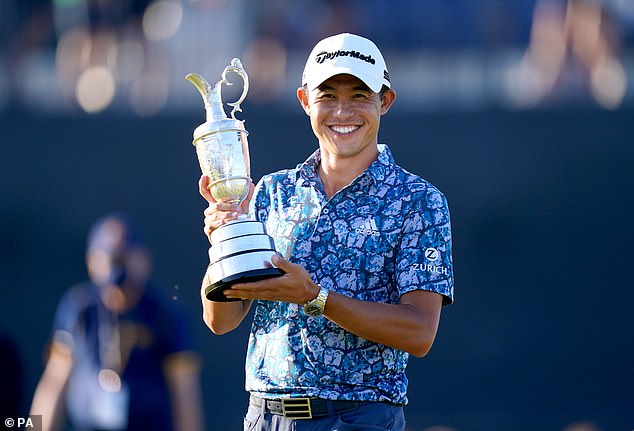 American Morikawa (pictured), 24, has joined Seve Ballesteros, Tiger Woods and Jordan Spieth as the only men to win The Open in the last 60 years at such a young age

‘We met in college and just clicked. It’s crazy because I won my first college tournament that next week and we’ve done pretty good since – it’s really fun,’ said Colin.

Zhu, who also plays the flute, went on to confess their relationship is ‘very competitive’ when they go out on the golf course together.

Morikawa continued: ‘Always, we never let each other win. I think she beats me on probably 70 per cent of our chipping competitions. It actually makes me a better player. What’s great about her is that we’re always competing.

‘To have her around [on the PGA Tour] on off weeks when no one’s around, she can always bring a wedge to the course and we can always do something fun.’

However, it’s all in good jest because Zhu is often seen on the PGA tour caddying for her boyfriend during competitions.

‘Most importantly, golf has created opportunities that have made lifelong memories that I’ll cherish forever. I’m so grateful for this amazing game.’