James Rodriguez scored a goal and set up another as Colombia clinched their place in the Copa America quarter-finals with a 2-1 victory over Paraguay on Tuesday night.

Colombia became the first team to secure a spot in the knockout stage of the tournament, with some fine goalkeeping from David Ospina and another dynamic performance from Rodriguez, who shook off a shoulder injury to play at the Rose Bowl in Pasadena.

The Real Madrid midfielder propelled Colombia to their second win in two matches, following a 2-0 victory over the United States last week. 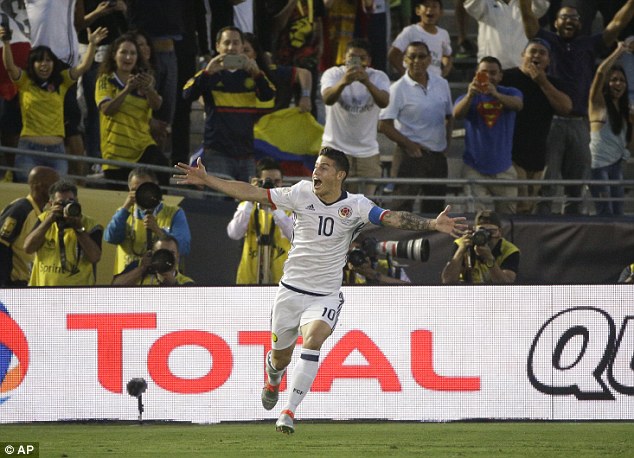 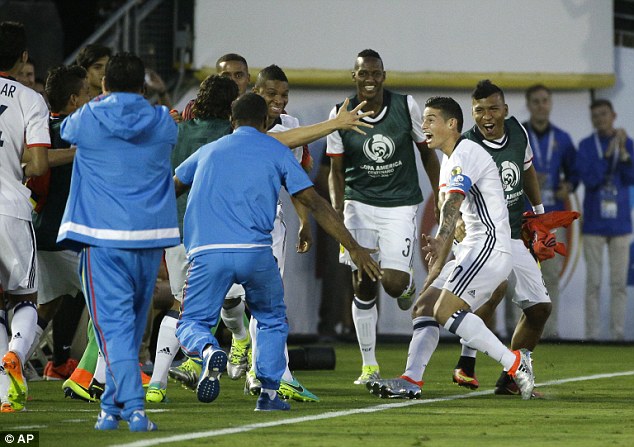 Victor Ayala scored Paraguay’s first goal of the Copa America in the 71st minute with a stunning, long-range drive past Ospina, who made a handful of saves to keep his country ahead.

Despite a few defensive struggles, the world’s third-ranked team has lived up to their billing so far with a fluid, attacking game built around Rodriguez, who played despite hurting his shoulder just three days ago.

Carlos Bacca scored a header from Rodriguez’s corner in the 12th minute. Rodriguez then scored with a low shot after a scramble in the box in the 30th minute.

Colombia missed several chances to score in a back-and-forth second half, while Ospina stopped everything except Ayala’s exceptional strike.

Los Cafeteros play their final group game against Costa Rica in Houston on Saturday, while Paraguay travel to Philadelphia to face the USA.

Paraguay must beat the hosts to advance to the last eight. 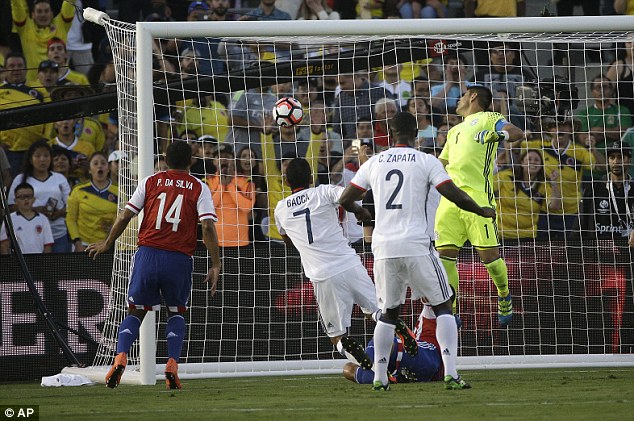 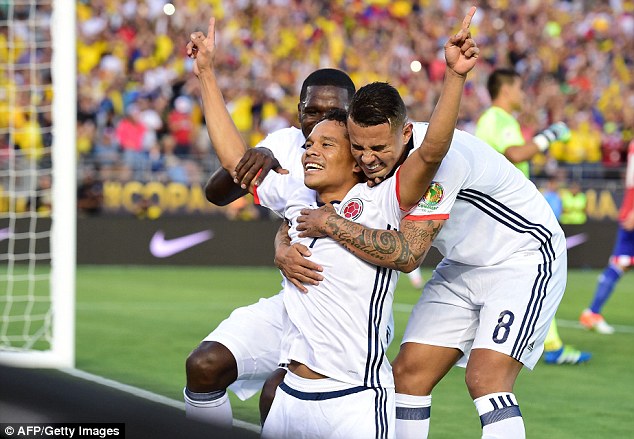 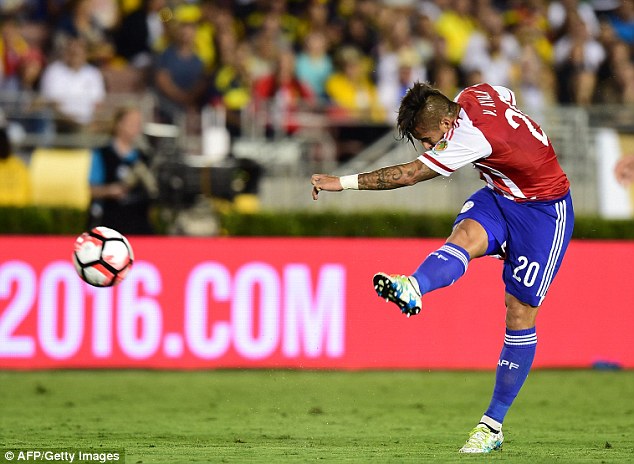 Substitute Victor Ayala gave Paraguay hope of comeback when he scored with this stunning, long-range strike 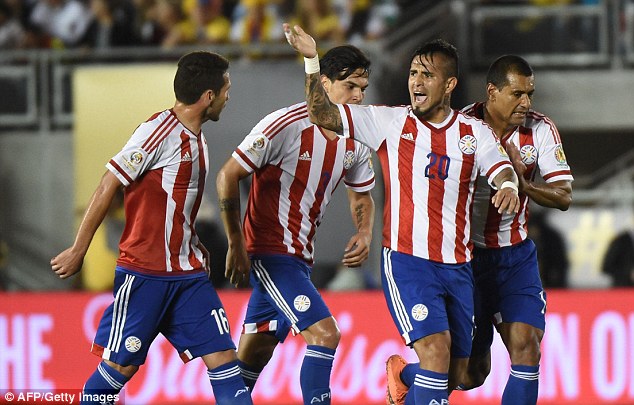 Paraguay tested Colombia’s defence throughout an entertaining game, but La Albirroja don’t have a player with the skills of Rodriguez – or the reflexes of James’ brother-in-law, Ospina.

After Bacca put Colombia ahead with a powerful header, Rodriguez showed off his talent with his 16th goal for his country. Surrounded by defenders, Edwin Cardona poked the ball outside to the Real Madrid star, who slotted it into the far corner of the net.

Arsenal goalkeeper Ospina made a fingertip save in first-half injury time to deflect Dario Lezcano’s short free-kick off the crossbar. He was even better in the second half with a flying, one-handed save to deny Oscar Romero. 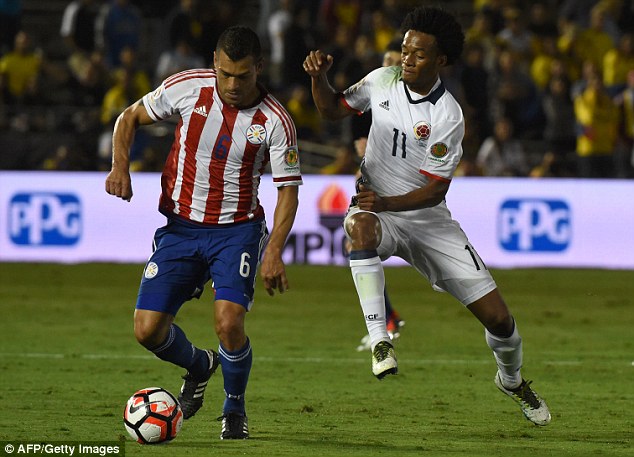 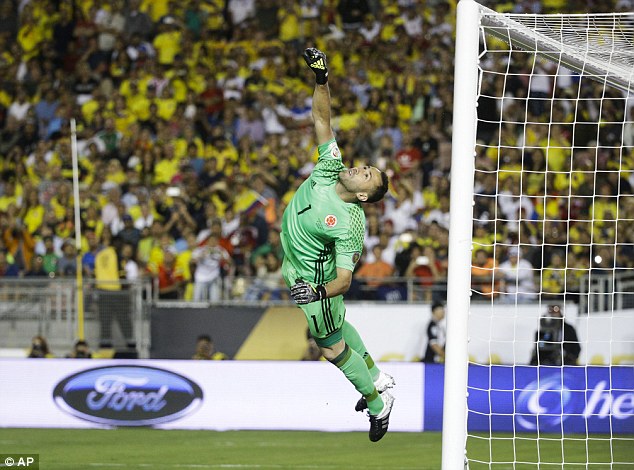 Arsenal goalkeeper David Ospina, pictured making a save in the first-half, was in good form for Colombia 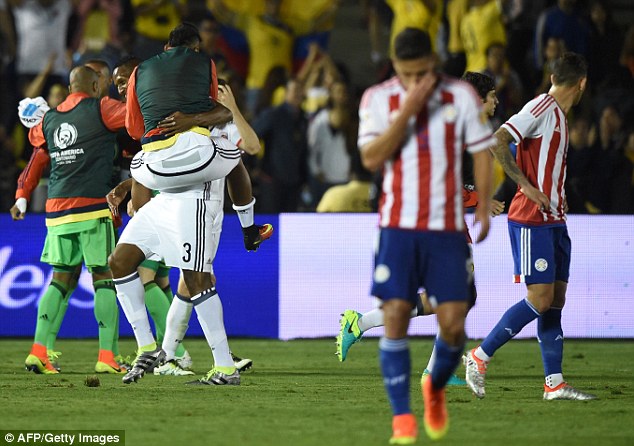 But Ospina could do nothing about Ayala’s strike, which trimmed Colombia’s lead and made the final minutes uncomfortable for Jose Pekerman’s side.

Paraguay’s task became tougher when Romero was sent off in the 81st minute, getting his second yellow card in three minutes after a sequence in which he pulled roughly on Rodriguez’s shirt and wrapped both arms around Guillermo Celis.

Despite some late pressure, Colombia held on to reach the quarter-finals. On this evidence, they will take some stopping.