A Colorado couple’s dream expedition through the Canadian tundra turned into a life-threatening scare where they were stalked by a massive wild grizzly bear for 17 panicked hours.

Kerri and Todd Mozinski, both retired veterinarians, spent over a year planning a 40-day canoe adventure where they’d paddle though 500 miles of water in the Canadian tundra in July.

However, they were confronted by a more dangerous side of Mother Nature when on July 15, the fifth day of their expedition, they were approached by a grizzly bear on the banks of an Arctic River and the beast destroyed their camp and canoe, leaving them stranded.

‘I got scared. And then we thought, “Where are we going to go and what are we going to do?”‘ Kerri said to the Duluth News Tribune on their final hours with the bear before they were miraculously rescued. 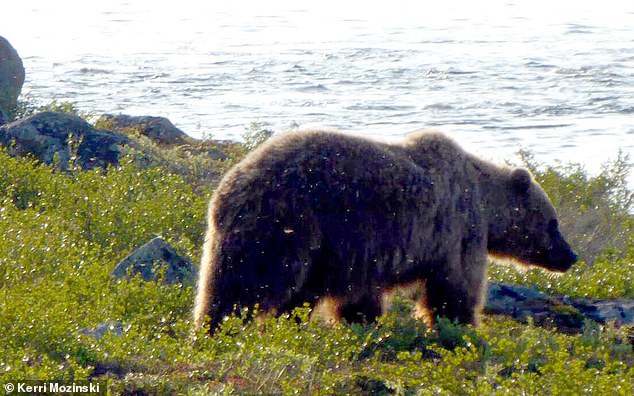 The retired veterinarians spent a year planning a 40-day canoeing trip. But their trip was cut short when a wild grizzly approached them on July 15, the fifth day of their expedition, destroyed their sleeping tent and canoe, and left them stranded in the wilderness. Keri snapped this picture of the bear before they were rescued

The couple said their first day they found bear tracks near where they set up camp – a foreshadowing of the danger they’d face later in the journey.

‘We landed and got all our stuff on shore, and the first thing we see is grizzly bear tracks,’ Todd recalled.

In their expedition they planned to travel from Sifton Lake in Canada’s Northwest Territories down to Baker Lake, an Inuit community in the territory of Nunavut.

Then on their fifth day they came nearly face to face with a bear, that refused to leave the couple alone, and stayed on their heels for 17 excruciating hours.

‘We checked the area – everything was fine, no sign of anything,’ Kerri said. But as they were eating dinner outside of their tent along the Hanbury river, they saw the bear approach.

‘[Todd] looks up at me, he looks behind me, and he says “Grizzly,”‘ Kerri recalled. ‘We jump up, we get out of the tent, we grabbed the bear spray. And the grizzly, he just came right in our little area and walked right up to the tent.’

The couple, armed with the bear spray, watched as the bear menacingly walked over within 20 feet of the couple.

‘He stood up, and he was just towering over [Todd],’ Kerri said. ‘He was sniffing the air, he was moving his mouth and pulling his lips back. We could see his teeth and everything.’ 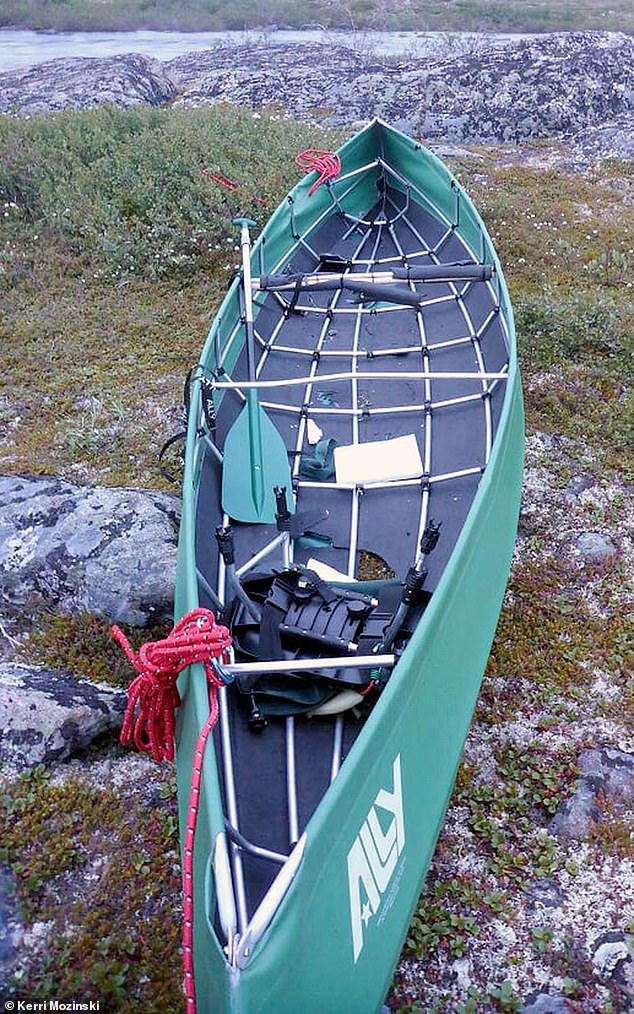 The duo sprayed the grizzly with bear mace twice, but it refused to back off. Instead it hung around the camp and destroyed their canoe, leaving them with no place to go

Terrified, Todd sprayed the bear, but that didn’t scare the animal.

‘He didn’t like it. He dropped back down, and he backed away a little bit. At that point Todd said to start getting everything together because we were going to try to pick up and move so we could get out of his way,’ Kerri said.

Kerri frantically started to pack up the tent and their gear but the bear reared its head again, leading Todd to douse it with spray another time.

Still, the grizzly bear refused to leave the camp.

‘He sat down, had a scratch then he got up, and he was just kind of pacing around the area watching us, trying to figure out what he was going to do next or how he was going to get our stuff,’ Kerri said. 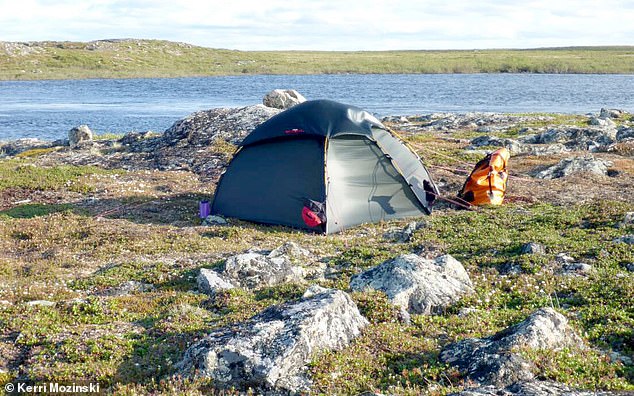 After hours of packing up their gear and trying to shake the bear off their trail, the couple had no other choice but to call for help. But even in their final hours outdoors, the bear returned to taunt them. Kerri and Todd’s camp pictured above

When they went to their sleeping tent they found the bear already destroyed it, tearing into the fabric and breaking the poles.

The couple ran off. When the bear was out of sight they decided to return to get their canoe, realizing they were trapped around a lake.

‘We knew that at the end of the rapids there was a lake. There was no place to go,’ Kerri said.

But when they returned they found the bear standing over the canoe, where he tore out the seats and shredded one of the life jackets, and tore a hole in the hull.

‘At this point, we knew we couldn’t go any further because we didn’t have a boat,’ Kerri said.

‘He didn’t come in close again like he had, but he was definitely watching what we were doing and wanted to know what was going on,’ she added.

Left in the wild with no place to go under the watchful eye of the massive grizzly, the couple had no choice but to call for help.

Kerri hit the SOS button on her Garmin inReach Mini satellite communicator, which called local Yellowknife authorities to rescue them around midnight.

‘They were very, very helpful, and they were very, very quick,’ Kerri said. ‘I was put in contact with the Royal Canadian Mounted Police, and they told us to sit tight as long as we were safe, and in the morning (they would) have someone sent out either by plane or helicopter.’

Without that smart piece of technology, the couple would have been stranded in the wilderness for a month.

‘I think we would have been in a real survival situation at that point,’ Todd said. ‘Especially, you know, [the bear] got our tent and he got our canoe. We would have had a tough time, I think.’ 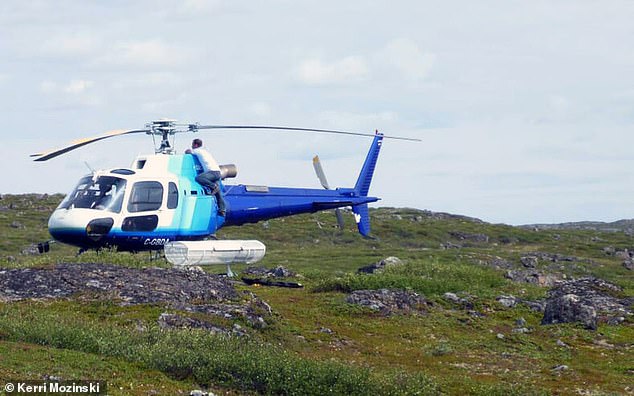 Kerri hit the SOS button on her Garmin inReach Mini satellite communicator, which called local Yellowknife authorities to rescue them around midnight. The rescue helicopter came the following morning and flew them three hours to Yellowknife in the Northwest Territories 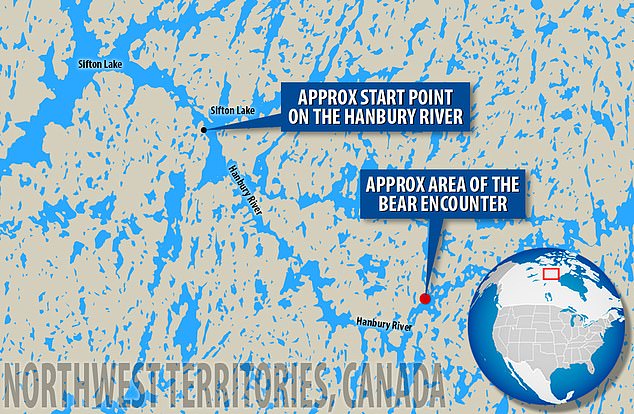 The couple was forced to wait throughout the night for help to arrive. At first the bear disappeared, but the grizzly returned in the early morning, while rescuers were still hours away.

‘When we didn’t see him all night long, we were thinking “Ok, this is good,”‘ Kerri said. ‘When he came back at 6am for me that’s when I got scared. And then we thought, “Where are we going to go and what are we going to do?”‘

Thankfully the grizzly walked away and Kerri took advantage of the moment to snap a picture of the beast.

Finally, a helicopter rescued the couple on July 16 and took them on a three-hour flight back to Yellowknife, the nearest city in Canada.

‘It was shocking, but the other thing was it was beautiful, too. It was an incredible animal, and the tundra is just amazing,’ she said.

Despite the bear scare which could’ve taken a life-threatening turn at any moment, the couple says then plan to complete their expedition again next year.

‘I’m not going to lie and say I’m going to be a little more watchful. I don’t know maybe there’ll be some things we’ll do different as far as gear and whatnot, but we went over it, and there was nothing else we could have done.’