A mother has been left fuming after her 12-year-old daughter’s teacher invited her to an after school arts club that was actually a gender and identity group.

Erin Lee, whose child was at Wellington Middle School in Colorado, slammed Jenna Riep for getting the youngster to go to the Genders & Sexualities Alliance event.

She told how her daughter came home and revealed a speaker told them they may be transgender if they were not comfortable in their bodies.

The horrified mother claimed they also asked kids who they were sexually attracted to and informed they could be queer while being shown a ‘Genderbread person’.

The bizarre diagram has been used in some woke schools and workplaces to claim anatomical sex is ‘male-ness’ or ‘female-ness’ – but has been rubbished by some academics.

Lee also alleged the youngsters were even asked to keep details of the meeting a secret and warned their parents were not safe.

Erin Lee, whose daughter attended Wellington Middle School up until last week, says her daughter sent her a text message last Wednesday asking to go to an after-school art club her art teacher had invited her. The group was actually a Gender and Sexuality [Alliance] club 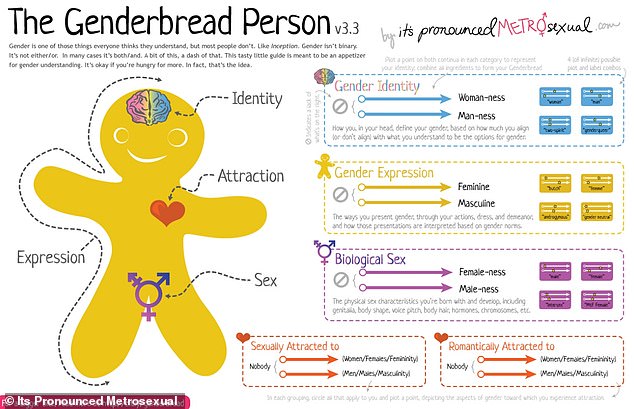 The group also saw her daughter participate in a ‘ Genderbread person activity,’ Lee said – a lesson in which organizers explicitly asked her daughter and other students in the room about their sexual identity, using a kid-friendly diagram of a gingerbread man (pictured) 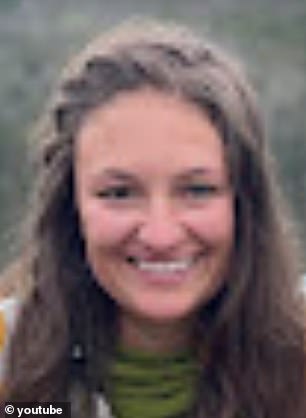 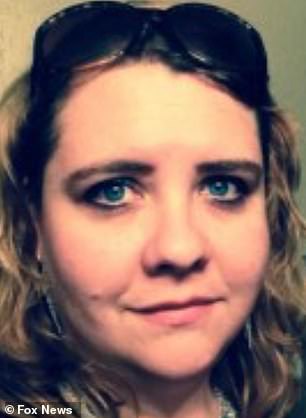 GUEST SPEAKER: Kimberly Chambers told kids that if they were not fully comfortable in their body that they may transgender and that members of their family were not safe to talk to

Lee said her daughter sent her a text message last Wednesday asking to go to an after-school art club saying art teacher Riep had invited her.

She and husband gave their permission, but upon picking up the schoolgirl from the supposed art club, the pair quickly realized something was wrong.

She told Fox News: ‘When we picked her up from that program after school, we could see on her face that something was incredibly wrong.

‘It wasn’t art club, it was GSA, or Gender and Sexuality [Alliance] is what they’re calling it now,’ the irate mother explained.

‘They told the kids that if they’re not fully comfortable in their body, then they are transgender.

‘So essentially told my daughter if she’s not 100 percent comfortable in her body, that she is transgender.’

‘She explained to my daughter that if she is not 100% comfortable in her female body, then she’s transgender,’ Lee explained, revealing that the outside speaker then told the middle-school-aged children that they were not safe around their parents.

‘She then told the kids that parents aren’t safe, and that it’s OK to lie to them about where they are in order to attend this meeting,’ the mom, who has since enrolled her daughter in a private Christian school but still has a son at the public school, said.

Lee said the speaker then gave the students her personal contact information and encouraged them to contact her on social media platforms such as Discord and What’sApp.

‘She doubled down that parents aren’t safe [and] that heterosexuality and monogamy are not normal,’ Lee further revealed. 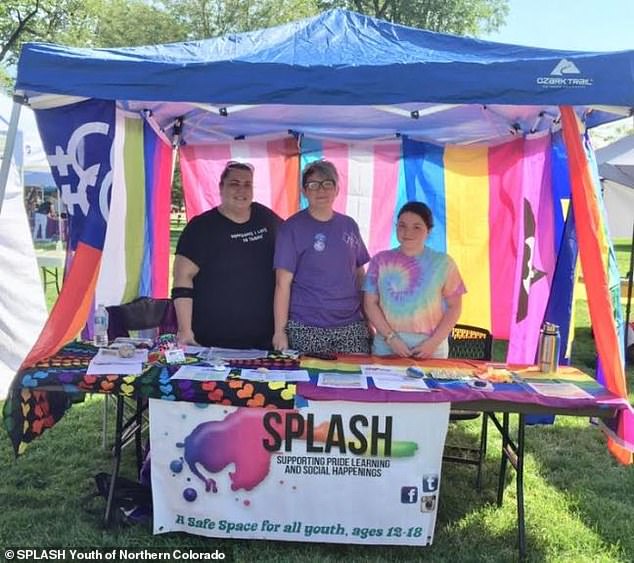 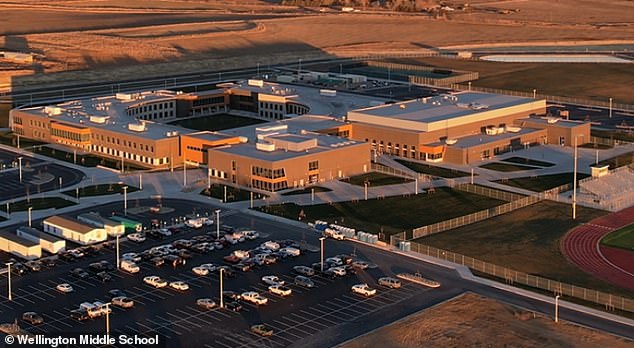 The incident took place at Wellington Middle School in Colorado on May 4. Poudre School District confirmed the existence of the club, and asserted that conversations in its GSA groups ‘may be confidential’ given the’ sensitive’ nature of the meetings’ discussions. Lee said she has since pulled her kid from the public school

After confronting school staffers and guest speaker Chambers about the lesson, The Poudre School District confirmed the existence of the club, and asserted that conversations in its GSA groups ‘may be confidential’ given the’ sensitive’ nature of the meetings’ discussions.

‘In PSD, we promise to create and uphold equitable, inclusive, and rigorous educational opportunities, outcomes, and experiences for all students,’ the district said in a statement to DailyMail.com.

‘As a district, we are committed to making our schools safe spaces in which all students can learn.

‘Genders and Sexualities Alliances, or GSAs, were established as safe spaces for members of the LGBTQIA+ community, allies, and any individual to come together with the goals of ensuring inclusivity, safety, and support.

‘Discussions in GSAs may be confidential given that they can sometimes be sensitive in nature (i.e. a student may be ‘out’ with specific friends but not with the community at large),’ it went on, adding that the GSA was ‘school-sponsored’ and approved by the district.

The district declined to comment on the allegations made by Lee ‘to protect the privacy of the student and their family.’

District brass further asserted that they had addressed the issue with Lee ‘on multiple occasions over the past year,’ and that her daughter is no longer enrolled in the district.

Lee said the school also confirmed the meeting is always held in secret.

Email correspondence obtained by Parents Defending Education between Chambers and art teacher Riep show the LGBTQ advocate expressing concerns over the mother’s complaints concerning the content being presented at the club.

The messages, sent on May 6 and May following Lee’s complaints to the school and district, show Chambers asking school staff to remind the mom that ‘the room is a safe space and that she should not share the names of her friends in attendance.’

She also told a seemingly worried Riep that emails and phone conversations she had had with Lee should be recorded and thought of as ‘evidence.’

‘Hello! This is private and I will be responding with a bcc for all of you, but it’s important for you to know the response messaging that I send out,’ Chamber wrote in one email sent to Riep and Katie Delahunt, a guidance counselor at Wellington Middle.

‘You can forward my response to admin at [Wellington Middle School], they probably will receive similar messages from this parent.

‘Tread lightly because this parent has HUGE potential to coming in to understanding or rejecting their child.

‘I’ll respond with what we know to work so far- but it’s always a gamble and a kids’ access comes in to view,’ Chambers went on. 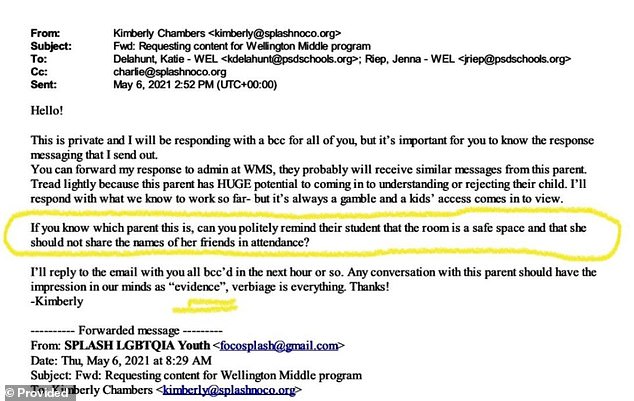 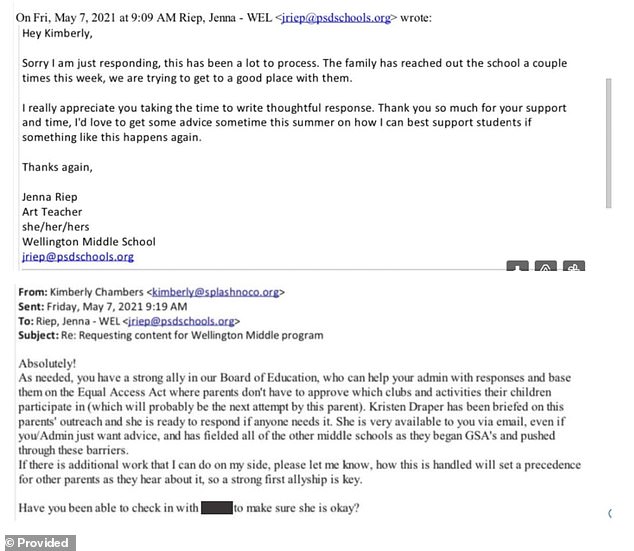 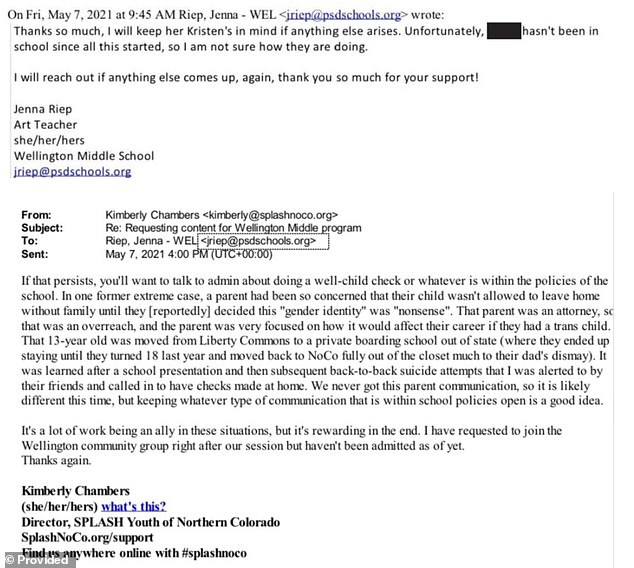 ‘If you know which parent this is, can you politely remind their student that the room is a safe space and that she should not share the names of her friends in attendance?’

She then wrote, ‘I’ll reply to the email with you all bcc’d in the next hour or so. Any conversation with this parent should have the impression in our minds as ‘evidence’, verbiage is everything. Thanks!’

The next morning, Riep responded: ‘Hey Kimberly, Sorry I am just responding, this has been a lot to process. The family has reached out the school a couple times this week, we are trying to get to a good place with them.

‘I really appreciate you taking the time to write thoughtful response. Thank you so much for your support and time, I’d love to get some advice sometime this summer on how I can best support students if something like this happens again.

Chambers responded shortly thereafter, assuring the art teacher not to worry over Lee’s complaints to the school and district, citing that they had ‘strong ally’ in Kristen Draper, a board member for the Poudre School District who also volunteers with SPLASH.

Lee also cited the Equal Access Act – a guidance that says fenderally funded schools cannot deny students the right to conduct meetings over religious, political, or philosophical content – as a reason that ‘parents don’t have to approve which clubs and activities their children participate in.’

‘As needed,’ Chambers wrote, ‘You have a strong ally in our Board of Education, who can help your admin with responses and base them on the Equal Access Act where parents don’t have to approve which clubs and activities their children participate in (which will probably be the next attempt by this parent). 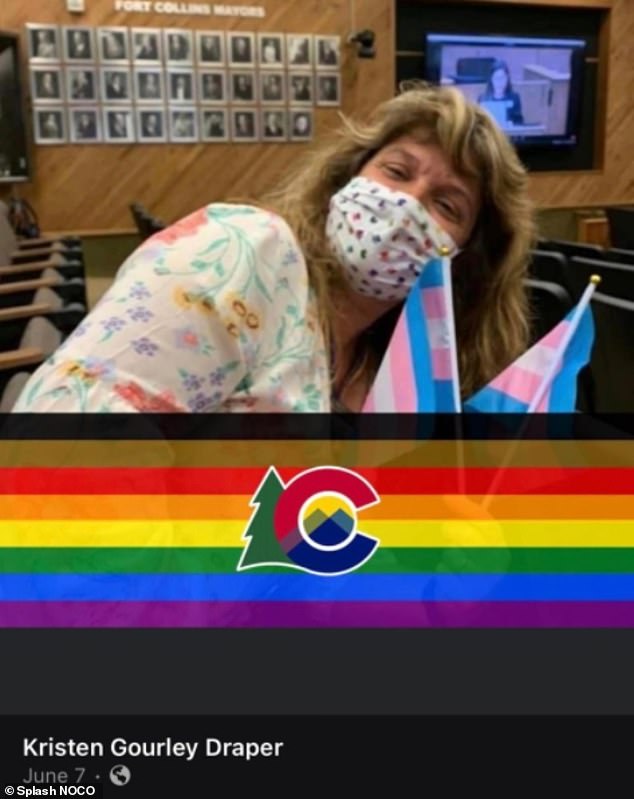 Chambers told a worried Riep that they had ‘strong ally’ in Kristen Draper, a board member for the Poudre School District who also volunteers with SPLASH

‘Kristen Draper has been briefed on this parents’ outreach and she is ready to respond if anyone needs it.

‘She is very available to you via email, even if you Admin just want advice, and has fielded all of the other middle schools as they began GSA’s and pushed through these barriers.’

The woke activist went on to assert that their handling of the situation would serve as a precedent for future conflicts of similar nature.

‘If there is additional work that I can do on my side, please let me know, how this is handled will set a precedence for other parents as they hear about it, so a strong first allyship is key.’

Chambers then asked: ‘Have you been able to check in with to make sure she is okay?’

In the next email, Riep revealed that the child had left the school, spurring Chambers to advise the staffer to perform a wellness check on the unidentified student.

She cited one ‘former extreme case,’ where she said ‘a parent had been so concerned’ about what was being taught to their child in a GSA group,’ that the child ‘wasn’t allowed to leave home without family until they decided his ‘gender identity’ was ‘nonsense.’

Chamber said the 13-year-old student was then removed from Liberty Commons Charter, also part of the Poudre School District, and sent to a boarding school.

According to Chambers, the student attempted suicide twice after being pulled from the school.

Chambers went on to assure Riep that they were not in the wrong, and touted their efforts as heroic.

‘It’s a lot of work being an ally in these situations, but it’s rewarding in the end. I have requested to join the Wellington community group right after our session but haven’t been admitted as of yet. Thanks again.’

DailyMail.com reached out to Chambers Thursday for comment regarding the GSA group and Lee’s claims, but did not immediately hear back.

Lee, meanwhile, says it’s time for families to withdraw their young students from woke public schools such as those in the Colorado school district, to properly protect their children.

She said she called the police to report the incident, who said they were unable to help due to the fact that the lesson occurred in a classroom and there was no accusation of physical touch or exposure of body parts.

Lee told New American Magazine that her daughter is now attending a private, Christian school and is ‘doing much better.’