These incredible colourised photos of Christmas during WWII show how US soldiers made the most of the season, celebrating with handmade trees, pudding and carols.

The original black and white photographs were painstakingly colourised by Welsh electrician Royston Leonard, 55, from Cardiff, Wales, with each snap taking between four and five hours to complete.

One stunning picture show how American soldiers were visited by a helmeted GI dressed as Santa Claus, who passed out gifts to injured troops and raised morale.

Other photos show grinning soldiers at a field hospital with a handmade Christmas tree decorated with surgical cotton wool and cigarette cartons used as decorations. One photos shows Gunner H S Hadlow of 15th (Scottish) Division in Holland announcing that the Christmas pudding is ready, while another shows Private Thomas Childs of 1st Herefordshire Regiment, 11th Armoured Division, reading a letter from home in his dug-out near Sonsbeck, Germany.

They also show an American soldier sharing out rations with local children after the Battle of The Bulge, American soldiers singing around the Christmas tree in Fort Lee VA and US soldiers sorting through mail in 1940.

Mr Leonard said: ‘The pictures show that community is all that matters, not buildings or material things.Their message is that the more people try to destroy us, the more we will smile and carry on.

‘I learned colourisation by trying out ideas by myself. I have learned so much from colourising, I feel it has helped my photography along the way.’

There was also famously a Christmas truce during World War One in 1914 with roughly 100,000 British and German troops involved.

This incredible photo was taken in the village of Buna in Papua New Guinea. The American soldiers are at an advanced dressing station, which were used to treat wounded soldiers. They can be seen posing with a handmade Christmas tree that is decorated with surgical cotton wool and cigarette cartons. The equipment seems to have come from the Army’s medical department. The soldiers would have been taking part in the New Guinea campaign of the War, which lasted from January 1942 until August 1945. During the initial phase in early 1942, the Empire of Japan invaded the Australian-administered territories of Papua 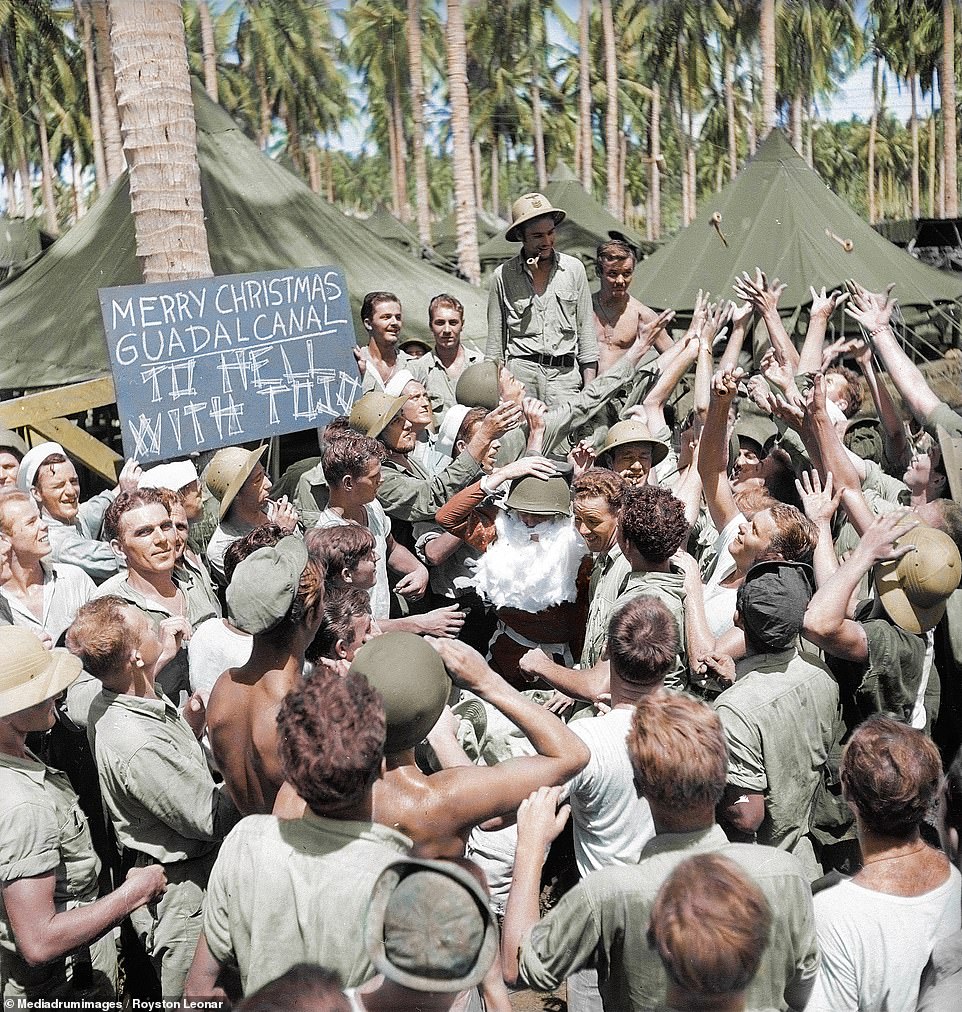 These soldiers look to be full of Christmas party spirit and are crowding around a Santa Claus as they mark the holiday. Also in the picture is a sign that reads:’ Merry Christmas Guadalcanal. To hell with Tojo’. Tojo refers to Hideki Tojo, the general of the Imperial Japanese Army, the leader of the Imperial Rule Assistance Association, and the 27th Prime Minister of Japan during much of World War II. The soldiers would have been involved in the Battle of Guadalcanal, the first major Allied offensive against Japan in the war. It was a military campaign fought between August 7, 1942 and February 9, 1943 around the island of Guadalcanal 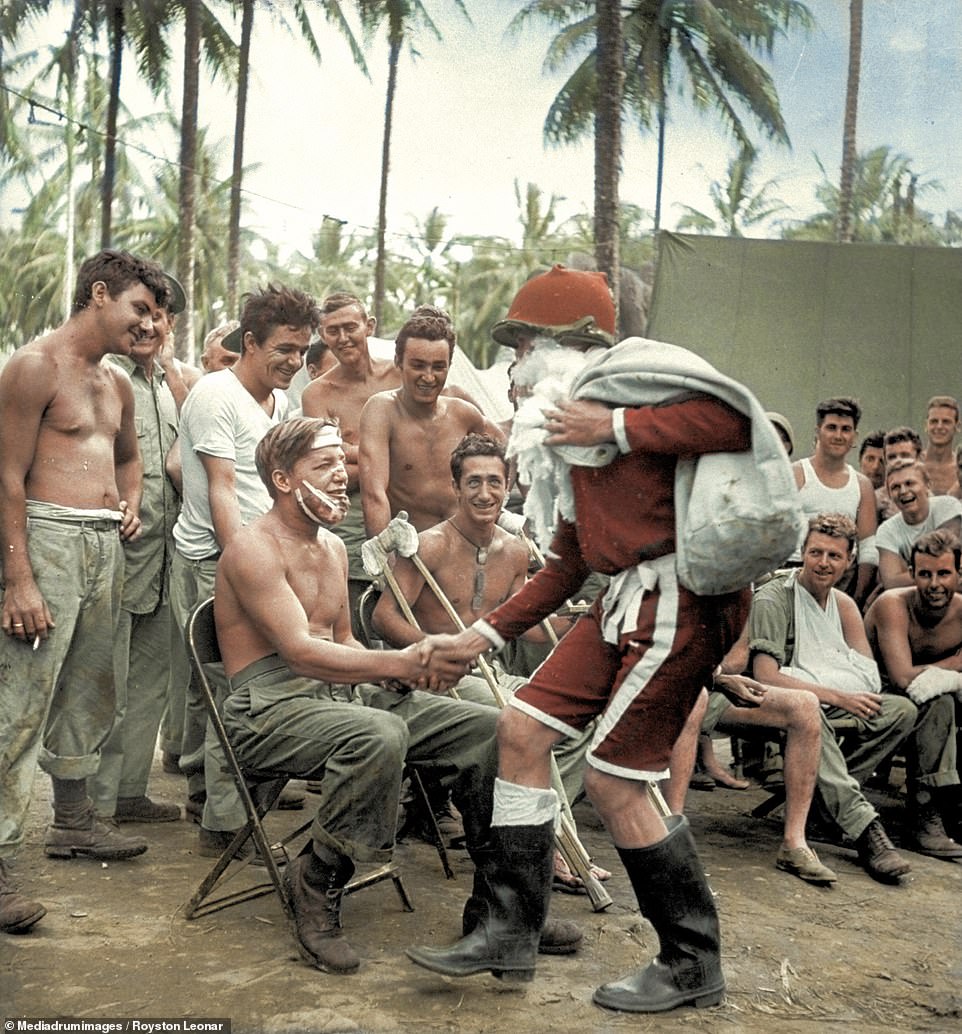 A helmeted and bewhiskered soldier dressed as Santa Claus handing out presents to wounded American soldiers on Christmas day in 90 degree weather, outside of a field hospital. The soldiers look to be in high spirits despite their injuries and look delighted to be celebrating Christmas. 407,316 American soldiers were killed in the war, with a further 671,278 wounded. It’s unclear where this photo was taken but the surroundings suggest it was somewhere in the Pacific 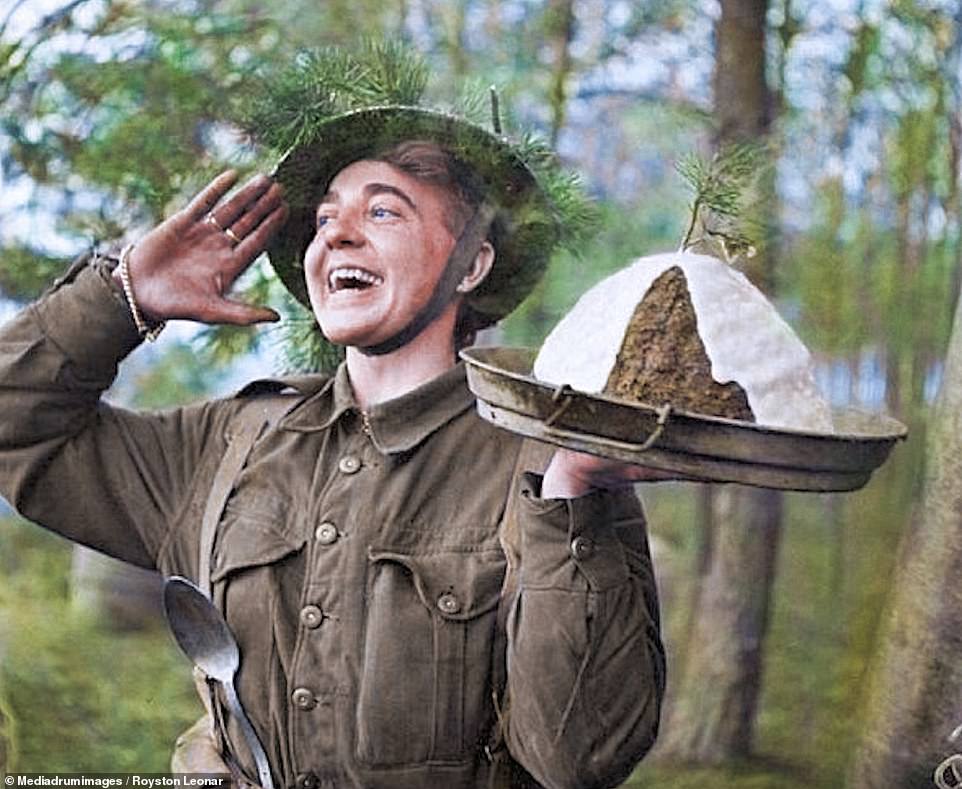 This heartwarming photo shows a soldier shouting ‘Come and get it!’ to his comrades. A smiling gunner H S Hadlow of 15th (Scottish) Division in Holland, announces that the Christmas pudding is ready on December 19, 1944 and encourages his comrades to come and join in. The 15th (Scottish) Infantry Division was an infantry division of the British Army that served with distinction in both World War I and World War II. The 15th (Scottish) Division landed in Normandy as part of Operation Overlord, the Allied invasion of Normandy, soon after the initial D-Day landings 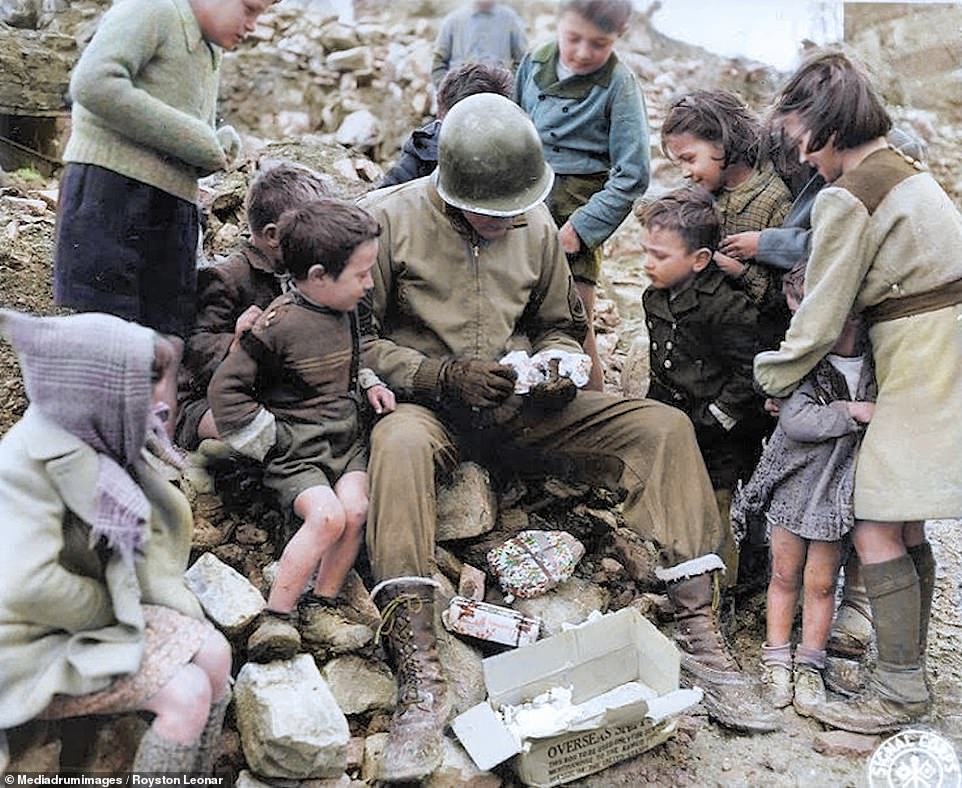 American soldier sharing out rations with local children during the Battle of The Bulge. The Battle of the Bulge was the last major German offensive campaign on the Western Front during World War II. It was launched through the densely forested Ardennes region of Wallonia in eastern Belgium, northeast France, and Luxembourg. The ‘Bulge’ was the largest and bloodiest single battle fought by the United States in World War II. 89,500 soldiers were killed, captured or wounded 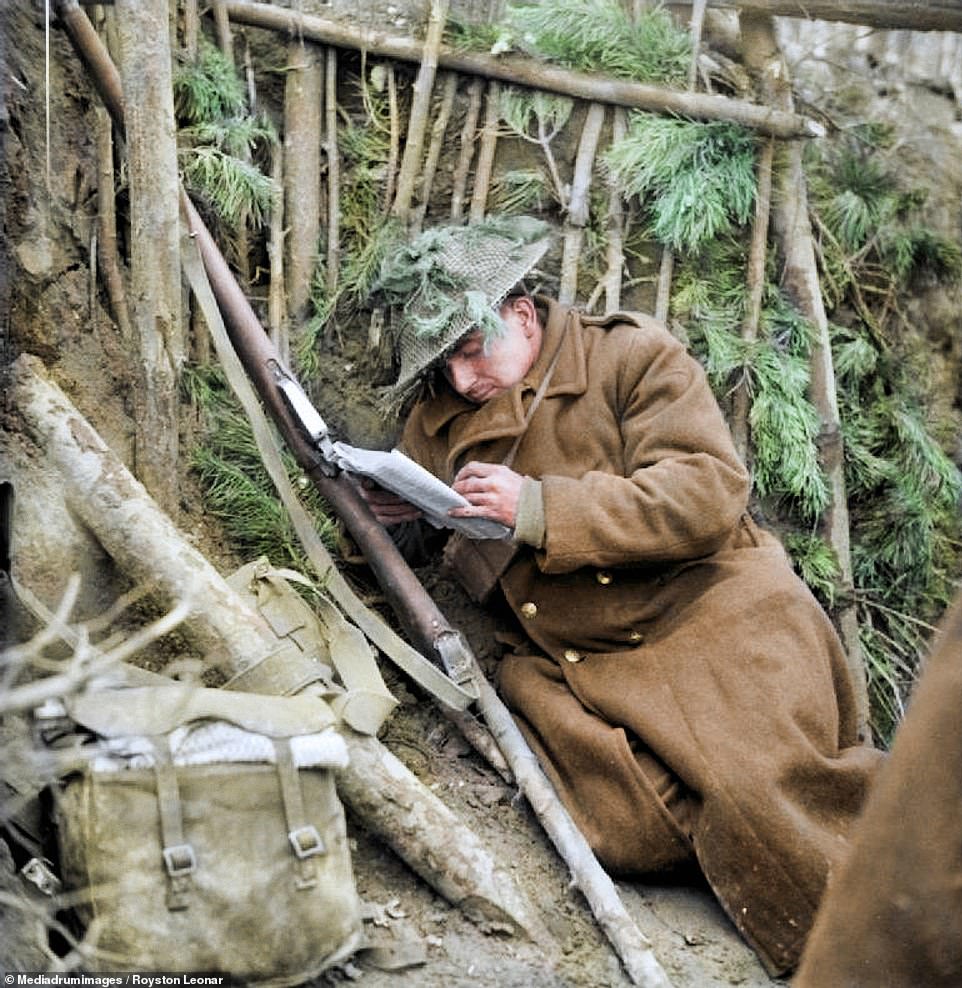 Private Thomas Childs of 1st Herefordshire Regiment, 11th Armoured Division, reads a letter from home in his dug-out near Sonsbeck, Germany. The 11th Armoured Division, also known as The Black Bull, was an armoured division of the British Army which was created in response to the unanticipated success of the German panzer divisions. The 11th Armoured was responsible for several major victories in the Battle of Normandy. It also participated in the rapid advance across France, Belgium, and the Netherlands and, later, the Rhine crossing in March 1945, before the invasion of Germany 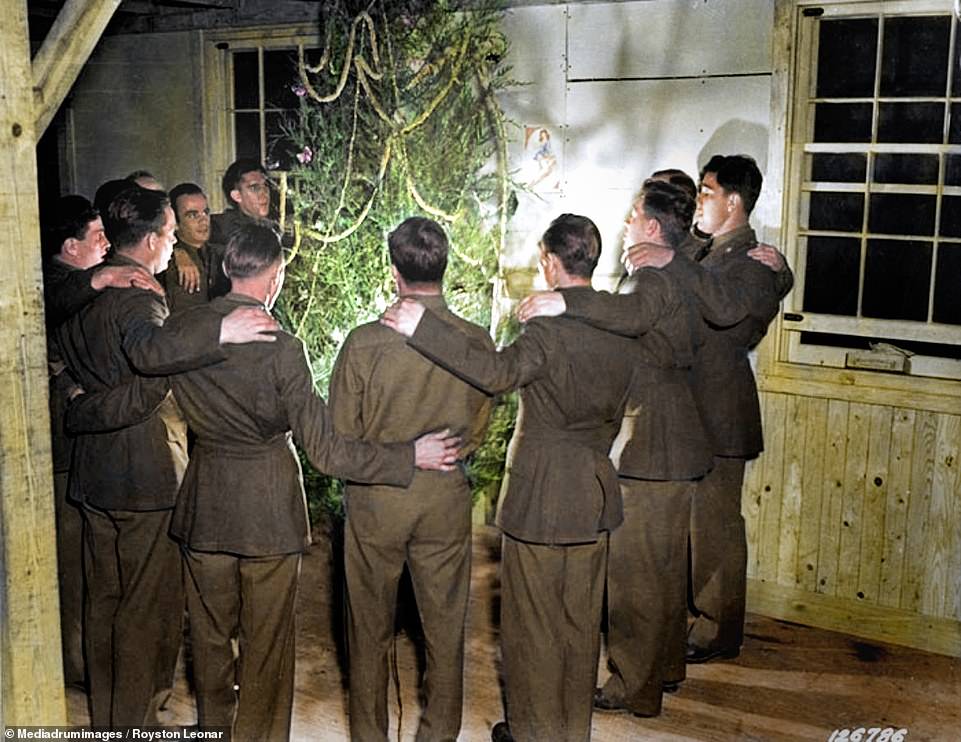 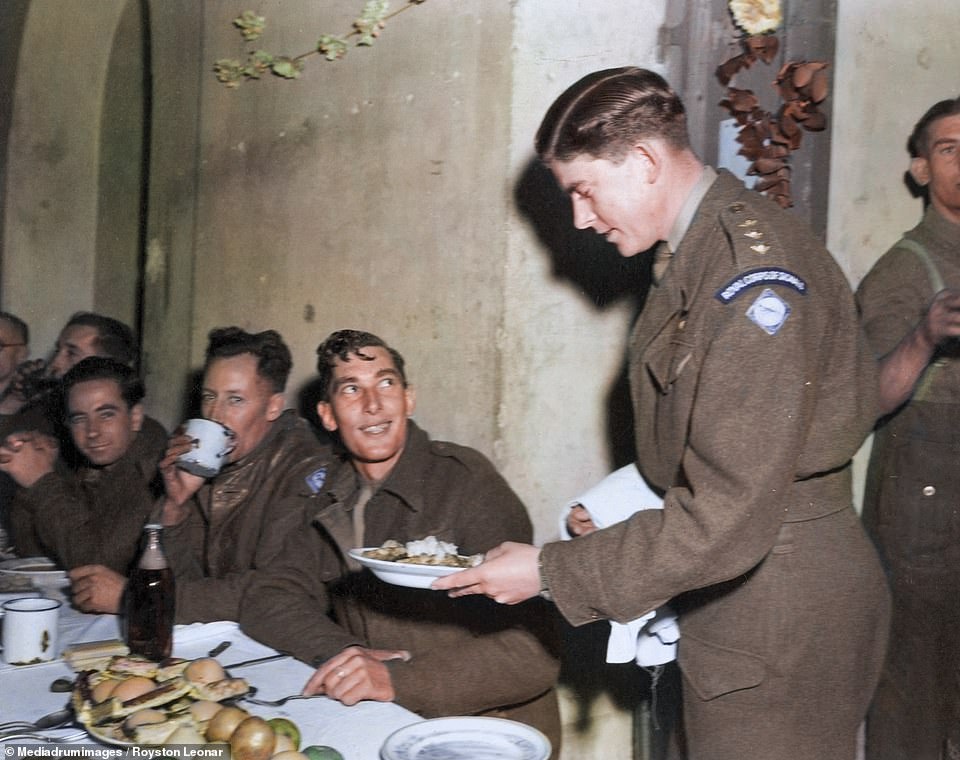 These soldiers can be seen enjoying a Christmas dinner in high spirits. They look to have a selection of bread, fruits and other rations that they have cobbled together to mark the festivities. They seem to be from the Royal Corps of Signals. Throughout the Second World War (1939–45), members of the Royal Corps of Signals served in every theatre of war. By the end of the war the strength of the Corps was 8,518 officers and 142,472 other ranks 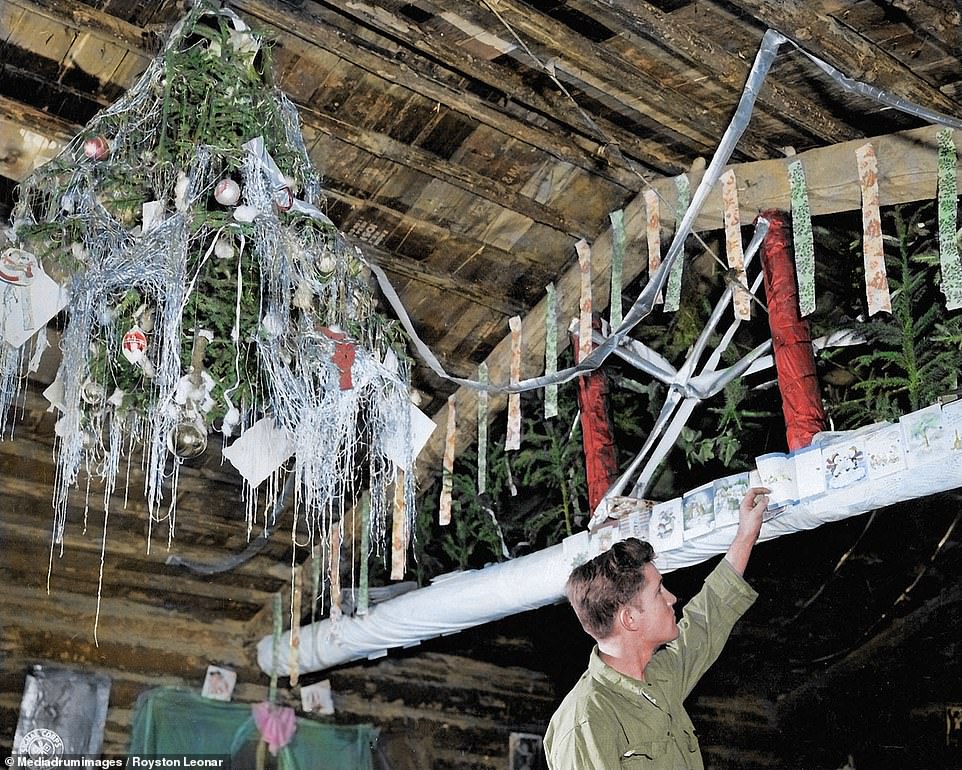 This soldier belongs to one of the corps of the US army, though it is unclear which one. There were 26 corps that served the US army during WWII. This photo shows a soldier getting into the Christmas spirit as he puts up some Christmas cards to go with the various decorations. The soldiers even have a makeshift Christmas tree 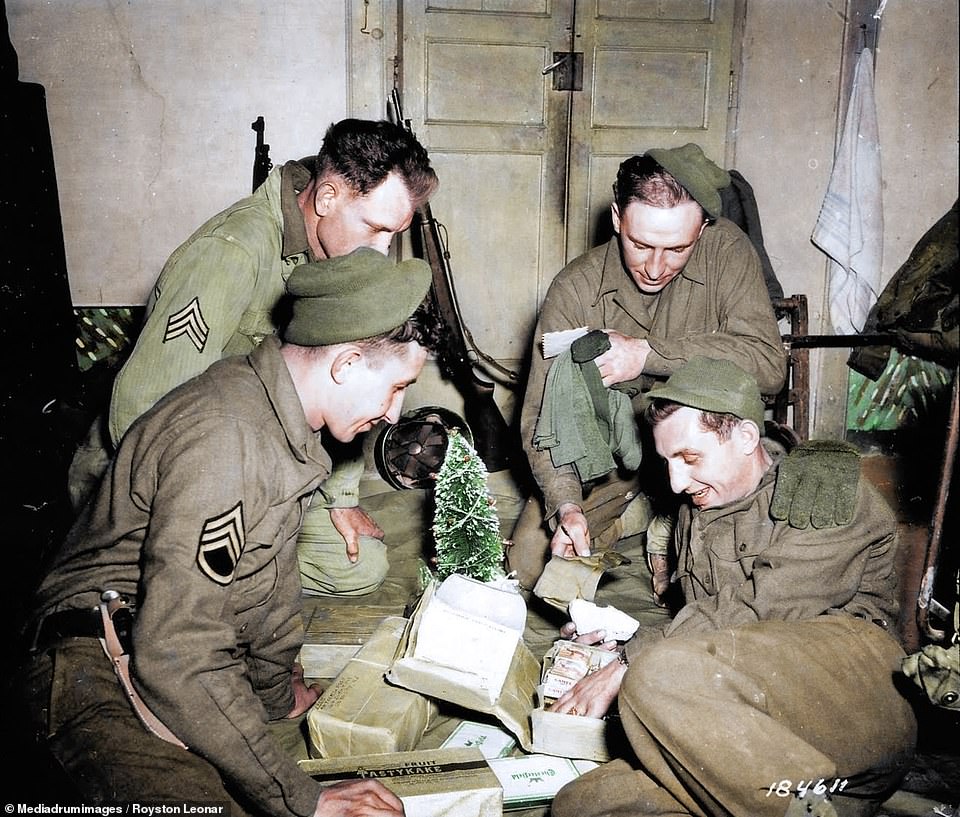 Taken in 1940, this photo shows excited American soldiers sifting through their Christmas mail. One of them appears to have gotten a slab of TastyKake Fruit Cake, a popular US brand. Other gifts seem to include notes, cards and even warm items of clothing. The British Army Postal Service delivered around 2 billion letters throughout WWII 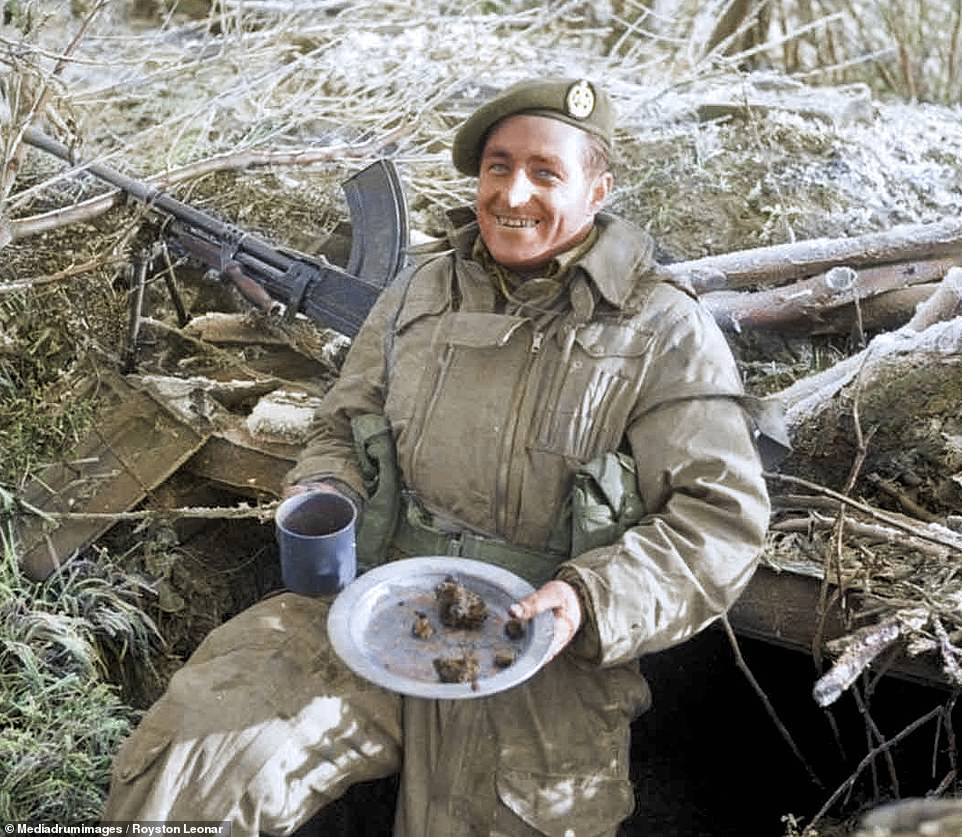 This British soldier looks to be in high spirits as he enjoys a makeshift dinner on Christmas Day. His gun is resting behind him as he enjoys a well-earned drink with his dinner. It’s not clear what kind of gun he has but it seems to be a light machine gun, possibly a Bren light machine gun. This would mean he was part of an infantry division