A Columbia University political science professor allegedly told a Republican college student to ‘drop dead’ and called him a ‘neo-nazi enabler’ for supporting President Trump’s coronavirus efforts during an argument on social media.

Talking GOP co-host Gabriel Montalvo, 21, took to Twitter on April 6 to reveal screenshots of an argument that he apparently had with Columbia professor Jeffrey Lax on Facebook.

Montalvo, a CUNY Queensborough Community College student, told the New York Post that the argument started when he commented on a political cartoon that one of his high school teachers had posted on Facebook. 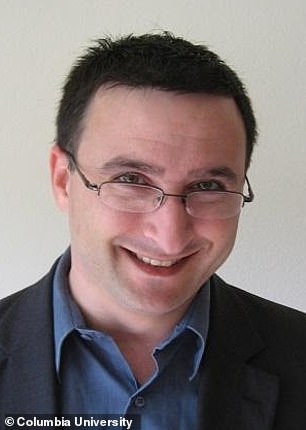 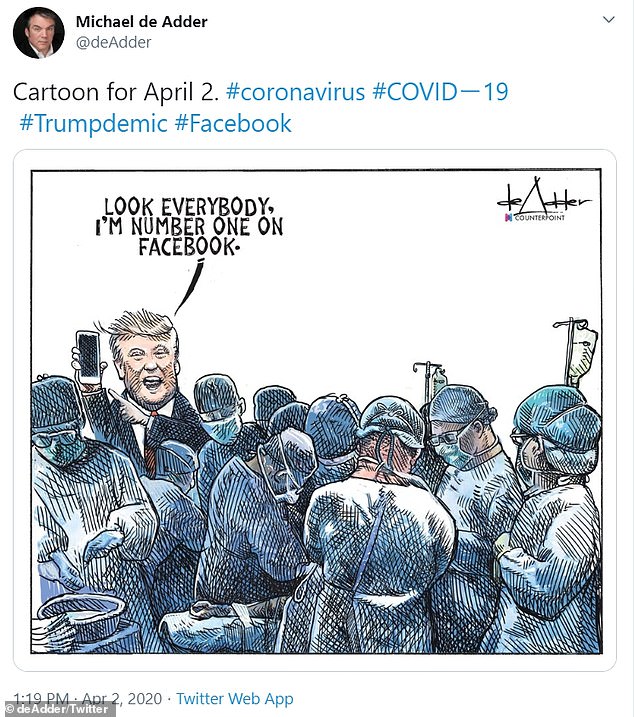 Montalvo commented on this cartoon by Michael de Adder, defending Trump’s handling of the coronavirus pandemic. His statement wound up drawing Lax’s ire

According to a screengrab posted on Campus Reform, the Michael de Adder cartoon that Montalvo commented on shows President Trump pointing to his cell phone and proclaiming, ‘Look everybody, I’m number one on Facebook,’ while surrounded by healthcare workers in full-personal protective equipment tending to presumably coronavirus patients.

Montalvo, the New York State Vice Chairman of the Republican National Hispanic Assembly, told the newspaper that his response to the cartoon ‘defended President Trump on how he’s handled the pandemic.’

‘People choose what they want to see and everyone has an opinion,’ Montalvo wrote on Facebook, according to the screenshot he tweeted out. ‘Doesn’t help that it’s constant bash POTUS with a side of Italian hospital footage.’

A few minutes after Montalvo posted the comments, however, Lax – deputy chair of Columbia’s political science department – replied with a string of comments. 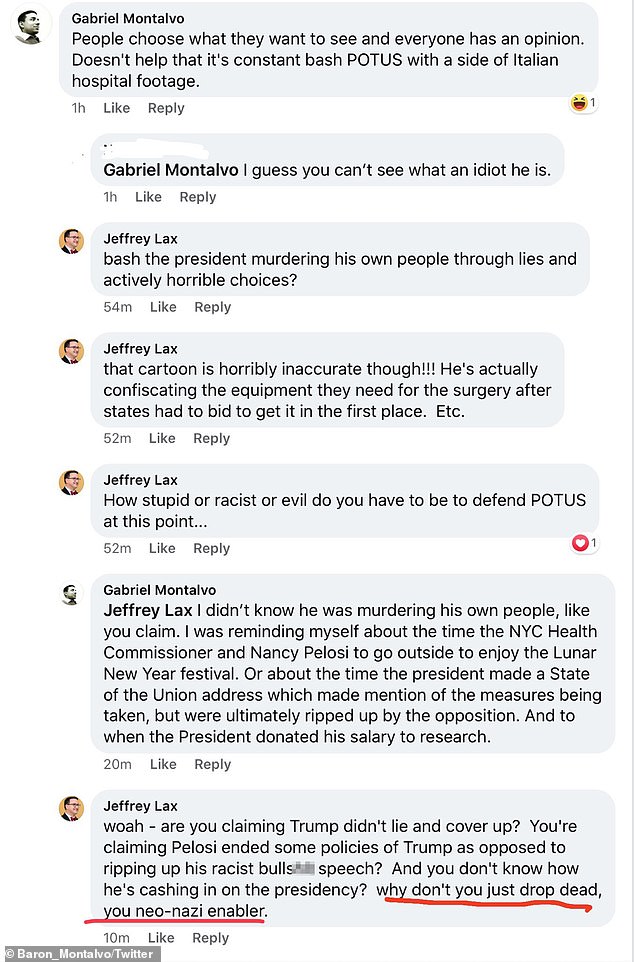 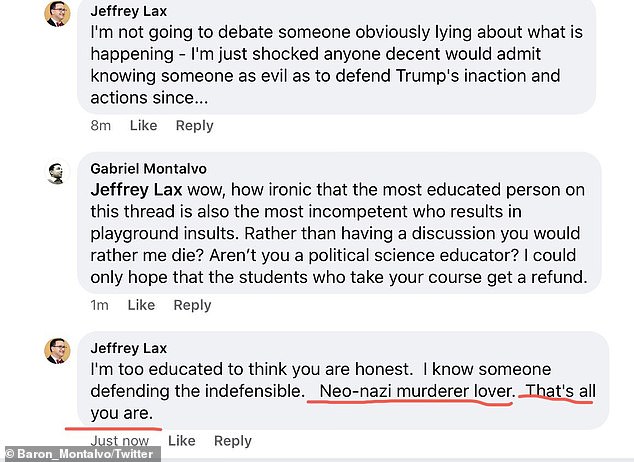 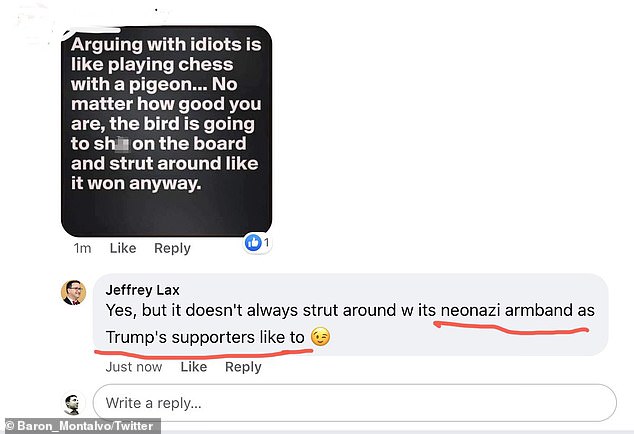 Montalvo tweeted screengrabs of his argument with Lax. In the grabs, the two sling insults at each other, with Lax telling Montalvo to ‘drop dead’ and calling him a ‘neo-nazi enabler’ 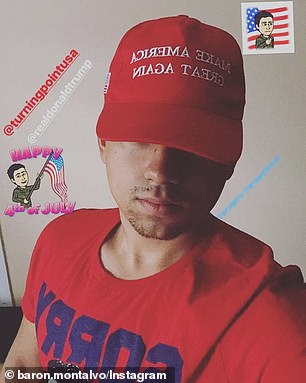 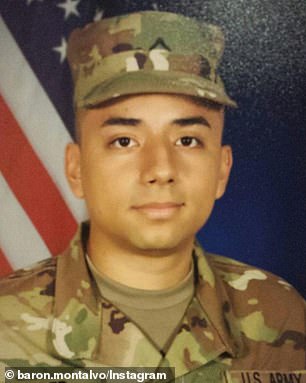 Montalvo (pictured) said that he had never met Lax before. He expressed surprise that Lax would call him a ‘Nazi’ since he’s a US soldier 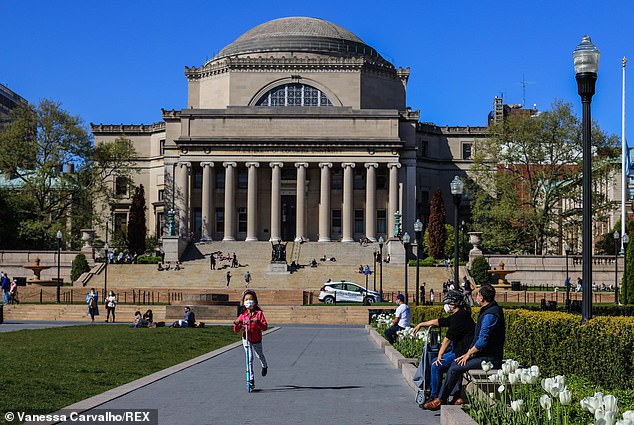 Montalvo said he filed a formal complaint against Lax with Columbia University (pictured), who said they would look into the incident

‘bash the president murdering his own people through lies and actively horrible choices? that cartoon is horribly inaccurate though!!! He’s actually confiscating the equipment they need for the surgery after states had to bid to get it in the first place. Etc,’ Lax wrote.

Montalvo then responded by writing, ‘I didn’t know he was murdering his own people like you claim,’ and referenced Lunar New Year celebrations, Trump donating his salary to research, Trump mentioning ‘measures being taken’ during his recent State of the Union speech and Speaker Nancy Pelosi ripping up that speech.

Lax’s response: ‘woah – are you claiming Trump didn’t lie and cover up? You’re claiming Pelosi ended some policies of Trump as opposed to ripping up his racist bulls**t speech? And you don’t know how he’s cashing in on the presidency? why don’t you just drop dead you neo-nazi enabler.’

Trump pledged to donate his $400,000 annual presidential salary if elected. He has been donating his salary to the Department of Health and Human Services recently.

Critics have said that this donation is a ‘meaningless gimmick,’ as Trump’s refusal to ‘divest his business have netted him $434million in personal revenue in 2018 alone,’ Robert Maguire, research director for Citizens for Responsibility and Ethics in Washington tweeted according to USA Today. He noted that ‘That’s a thousand times more than his presidential salary.’

Lax and Montalvo then proceeded to sling insults and argue with each other on Facebook.

Montalvo said Lax was ‘the most educated person on this thread and also the most incompetent’ and added he hoped Lax’s students ‘get a refund,’ with Lax responding Montalvo is a ‘Neo-nazi murderer lover.’

Montalvo, a specialist in the New York Army National Guard, told the New York Post that he had never met Lax before, but that the professor ‘responded very belligerently’ on Facebook.

When tweeting out screengrabs of the social media argument on Twitter, Montalvo wrote: ‘Libel or stupidity? @Columbia is this behavior reflective of the college’s views? A Deputy Chair at your university is telling a supporter of @realDonaldTrump to go die over a difference of opinion? He then has the gall to call a U.S. Soldier a Nazi!?

‘does this violate your guidelines? I can only hope the #1A is upheld in the classroom. Professors and higher education establishments should be examples of the exchange of civil discussion, not cyber harassment & perverting a historic tragedy to push an agenda.’

Montalvo told Campus Reform that he lodged a formal complaint with Columbia via email on May 12, waiting a month due to ‘the various difficulties that the pandemic has placed’ on him.

He told the New York Post that a representative for Columbia President Lee Bollinger said they would review the incident, but also noted that he hadn’t heard back yet.

Neither Lax nor Columbia have publicly commented about the incident yet.