A $50million lawsuit filed by a Columbia University student alleges the school’s dean coerced her into sex with the promise of housing help, following her being raped at an acquaintance’s apartment.

The Manhattan federal court lawsuit claims dean of students for the Ivy League’s School of General Studies, Tom Harford, knowing the woman, 25, was desperate for assistance dangled money as a way to coerce her into having sex with him starting in May.

‘Realizing her desperation, Dean Harford provided Plaintiff with financial support on multiple occasions,’ the lawsuit says, according to the New York Post.

The woman is only identified as ‘Jane Doe’ in the lawsuit.

She claims Harford gave her $500 ‘cash from his pocket’ and told her he would help her get a scholarship.

The woman had reported the alleged rape at the acquaintance’s place to the police, according to the suit. It is unclear if she was residing there when the rape occurred.

The suit also claims that the school failed to protect her against the dean who the woman who pursued ‘an inappropriate sexual and romantic relationship’ with her, according to the Wall Street Journal. 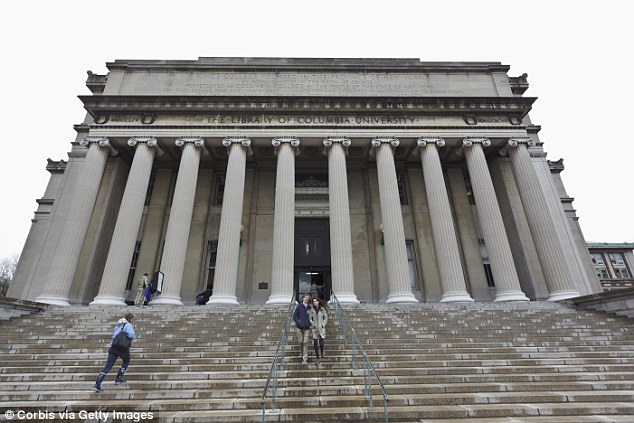 In the federal lawsuit, Columbia University is accused of failing to protect the 25-year-old grad student from the dean’s predatory behavior

‘Over the course of the summer, Harford used his power and influence at Columbia to coerce Plaintiff into an inappropriate sexual and romantic relationship,’ the papers state.

Attorney David Sanford is representing the student. He recently won a $1.25million award for x-Columbia Business School professor Enrichetta Ravina who successfully sued the school for sexual harassment and failing to protect her from a predatory colleague.

Columbia University told the Post the dean has since been removed.

‘Harford was promptly removed from his position as Dean of Students when we learned of behavior that was unacceptable in light of his responsibilities,’ the school said in a statement.