Come From Away review: Feelgood despite a grim subject

Hamilton is easily the most original American musical to have touched down in the West End in the past year. But the most unlikely of next year will surely be Come From Away. It’s a feelgood show despite being about the hideously grim attacks of 9/11.

I love this musical, which I have just seen on Broadway, for several reasons, not least because it is set in the little town of Gander in remote Newfoundland. I’ve been there. Gander has 10,000 people, seven traffic lights and the occasional stray moose.

When the Twin Towers were attacked, 38 planes were diverted to Gander’s airport, with their 7,000 passengers and crew, including several cats and dogs and a pair of chimpanzees en route to a zoo. 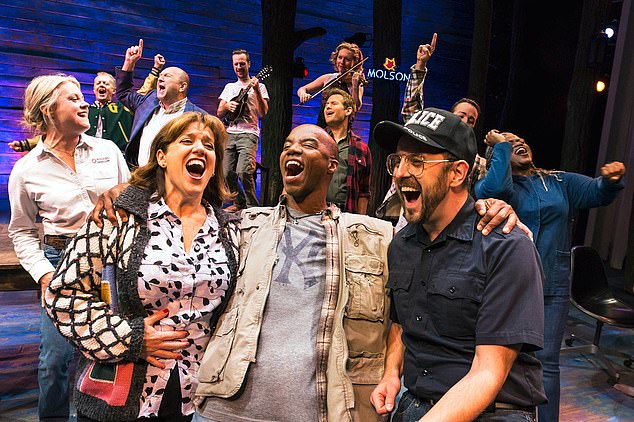 The cast features big-hearted locals and a shy British traveller who finds romance on the ground. There are ‘Newfie’ scenes involving ritual fish-kissing and a local rum called screech

Come From Away is all about the day after, when local Newfoundlanders instinctively took in the stranded ‘plane people’. Everyone got busy. The air traffic controllers made chilli.

Three hot meals a day were conjured up for thousands under the command of a genial, if frazzled mayor. The local ice rink was used as a giant fridge. Various faiths were catered for, fresh clothes provided, kids looked after.

When the travellers got back on their planes a few days later, some were in love, some distraught with grief, but all were grateful to the islanders who refused cash or thanks. These temporary refugees left Gander, but Gander never left them.

The musical comes from husband-and-wife team David Hein and Irene Sankoff. They hit upon this story (there was also a BBC radio play, The Day The Planes Came) and went to Newfoundland to interview the locals. They boiled down hours of material for this remarkable show.

The result is crisply directed by Christopher Ashley with no design bells or whistles, just lots of snappy role-swapping and Celtic-flavoured folk-rock from what sounds like a well-oiled Newfoundland pub band.

The cast features big-hearted locals and a shy British traveller who finds romance on the ground. There are ‘Newfie’ scenes involving ritual fish-kissing and a local rum called screech (the sound people make when they drink it). In London the cast will feature Rachel Tucker (from Wicked) as Captain Beverley Bass, who was American Airlines’ first female captain.

This is not a show built on stars or power ballads. It’s got a community-centre feel, and comes with its own inbuilt antidote to the vengeance politics of America now.

Short and without an interval, it simply depicts the instinctive generosity of a people who live in a place so cold in winter that even the lobsters wear mittens. It’s a beautiful affirmation of human kindness – a show you can warm your toes by. 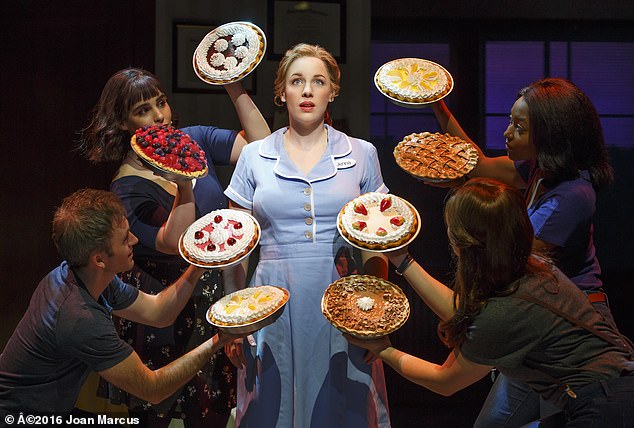 Waitress also arrives in London from Broadway in February. It’s a perky musical based on a 2007 film, and it has a big lead part – not yet cast – for the pregnant waitress (played winningly in New York by Nicolette Robinson) who’s married to a drunken slob who snatches her tips.

Jenna cooks pies in her own time and the show is one big diabetic glorification of flour, butter and sugar. These pies she names after her experiences: there’s Kick In The Pants Peppermint Pie, and her unwanted conception (by her husband) produces Betrayed By My Eggs Pie. Jenna is trapped in an abusive marriage but finds romance with a gawky gynaecologist.

The musical is, it claims, the first in history to have four women in the top creative spots. The music and lyrics are by singer-songwriter Sara Bareilles, whose score – varied and pulsing – is excellent.

The truck-stop joint comes to life, reminding me in its loneliness of one of those Edward Hopper diner paintings. The other waitresses are amusingly sketched and The Negative is the first song I know of that’s about a pregnancy test. It’s a must for Bake Off fans.