Come on, girls – you can be Prime Minister too!

‘Do you enjoy presenting the Today programme?’ is a question Mishal Husain is often asked. During her first months in the job in 2013, there was no way she could have answered ‘yes’.

Though honoured to have been chosen as the first-ever Muslim presenter on the prestigious show, the reality was a ‘tight knot in the stomach’ of fear and dread on the night before the 3am wake-up call, followed by hours of self-recrimination after 9am when the programme was over. She almost bailed out after a few months.

Five years later, and fully settled into the job, she now feels she can answer in the affirmative.

With the confidence and authority of a woman who has both attained her dream job and loves it, she meditates on what it took for her — and other women — to work their way there. This is not a memoir; it’s more a feminist manifesto. So don’t expect a lively account of Husain’s Pakistani family, her childhood in Saudi Arabia where her father was a doctor, her spell at the girls’ boarding school Cobham Hall, her time at Cambridge, her marriage to high-powered lawyer Meekal Hashmi, or her home life as the mother of three boys 20 months apart (one son, followed by twins, now 12 and ten respectively).

There’s pitifully little of any of that, but my antennae were out for any humanising details and she does give us about seven of them. Her father used to read her school reports aloud with the family clustered round the dining-room table. He told Mishal to aim high.

Her grandmother’s favourite Urdu saying was: ‘There are blessings in being busy.’ Her mother achieved two university degrees in Pakistan and became a TV producer in the Sixties, but she gave up her career for marriage and children.

As for Husain’s sons, she gives us only two vignettes. The first is that mealtimes when all three sons were under the age of three was ‘like feeding time at the zoo’.

The second — more significant to her feminist agenda — illustrates the innate confidence and ambition of boys.

Moments after one of them learned to ride a bike on his own for a few wobbly yards, he asked if he might do the Tour de France one day.

Another son, on hearing Sadiq Khan, from a British-Pakistani background, had been elected Mayor of London, said: ‘I think I’ll go for Prime Minister.’

‘Without knowing the word ambition, boys appear to set their sights high as a matter of course,’ writes Husain.

So why are young girls different? Why the tendency to self-deprecate and self-censor? What can women do to raise their ambitions, their confidence, their employability, their suitability for promotion to the top?

Again, I was hoping for Husain’s own, detailed experiences, but instead, she quotes from study after study, survey after survey, and other successful women, such as Judi Dench’s memorable remark that ‘fright can transform into petrol’. 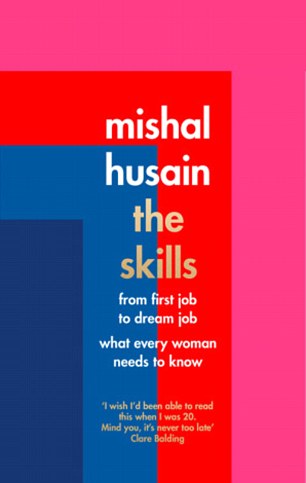 Women, she says, must be bold, fight for their rights, ask for flexible hours, raise their voices, put themselves forward for difficult tasks and make themselves ‘bigger’ at male-dominated meetings, rather than shrinking into a corner. It’s not easy. As managing director of the IMF, Christine Lagarde has noticed that ‘in male-dominated environments, when a woman takes the floor, the attention of the men in the room goes down a few notches. They start looking at their emails, or chatting’.

How could it have been possible, Husain is often asked, that intelligent, high-powered women like her at the BBC ‘sat in the situation’ of their pay being lower than that of their male colleagues for years?

She pleads: ‘We didn’t know the picture until it was revealed.’

If we want to help the current generation of girls to achieve their potential, Husain suggests, we should ask them not ‘What do you want to do when you grow up?’ but ‘What is your ambition for when you grow up?’

Which is a good place to start.