Comedian, 52, was terrified of STAIRS for 40 years

A comedian has finally overcome his 40-year ‘phobia’ of stairs after claiming his fear was so intense he missed out on holidays, skipped school and even put off losing his virginity.

Richard Smith, 52, was terrified of heights as a toddler but did not discover he had bathmophobia – the specific fear of stairs – until he was in his mid-forties.

For decades the writer, from Boston, Lincolnshire, felt held back by his ‘restrictive’ condition, which he even hid from his wife Christine.

But in 2014 Mr Smith was forced to tackle his phobia head on when he was commissioned to write a book about England’s first hot-air balloon rider James Sadler.

After being asked to ride in a hot-air balloon as part of his research, Mr Smith finally underwent therapy to overcome his fear, which President Donald Trump is also rumoured to suffer from.

Now cured of his phobia, Mr Smith can climb stairs or stand on a balcony with ease.

Richard Smith has finally overcome his 40-year ‘phobia’ of stairs after claiming his fear was so intense he missed out on holidays, skipped school and even put off losing his virginity 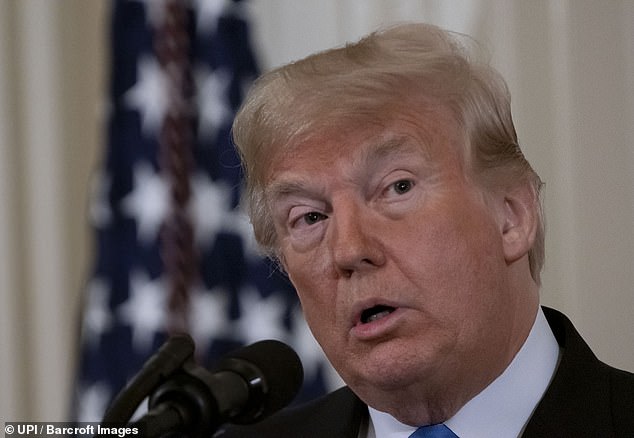 Rumours of President Trump suffering from bathmophobia – the specific fear of stairs – emerged after he was photographed holding hands with Prime Minister Theresa May. Sources in Washington DC claimed he has an aversion to slopes and grabbed her hand in fear

Mr Smith, who now lives in Oxford, said: ‘My phobia of unfamiliar stairs dictated my day-to-day for quite a large portion of my life. It was very restrictive.

‘I kept it secret from people because I was too embarrassed about it, there was an overriding sense of shame.

‘I was aware it wasn’t beneficial to me but I was ashamed of it and reluctant to get help.’

Mr Smith believes his fear started when he fell down the stairs at home at just three years old.

WHAT IS BATHMOPHOBIA? THE BIZARRE PHOBIA ‘THAT AFFECTS PRESIDENT TRUMP’

Bathmophobia is the supposed fear of slopes or stairs.

It is not an officially recognised condition due to it not featuring in the Diagnostic and Statistical Manual of Mental Disorders.

This manual is published by the American Psychiatric Association and is used to diagnose psychiatric disorders.

Many experts think bathmophobia may be a broader fear of heights.

Or it may come about if a person has had a bad experience with stairs, such as falling down them as a child.

Rumours of President Trump suffering from bathmophobia first emerged after he was photographed holding hands with Prime Minister Theresa May. 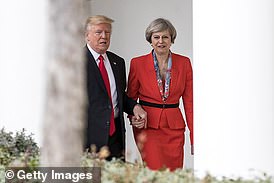 Government sources in Washington DC claimed Mr Tump has an aversion to slopes and stairs, and may have grabbed the Prime Minister’s hand in fear, BBC reports.

Mr Trump also tweeted in 2014: ‘The way President Obama runs down the stairs of Air Force 1, hopping & bobbing all the way, is so inelegant and unpresidential.

Mr Trump opened up about his fear of germs in his 1997 book The Art of the Comeback where he called hand shaking a ‘curse of American society’.

Dr Abigael San, a chartered clinical psychologist in north London, said this form of OCD may go hand-in-hand with bathmophobia due to both being a sign of anxiety.

But it was not until a school trip to a local castle aged eight that he realised just how severe his condition was.

‘I had absolutely loved castles, but on this trip I kept trying to walk up the stairs but I just couldn’t bring myself to go up,’ Mr Smith said.

‘I realised I was physically unable to go up the stairs, I couldn’t move my feet and became very agitated. I realised then I was terrified of stairs.

‘Eventually, a teacher pulled me aside to ask what was wrong and I became very upset and emotional.’

While at school, Mr Smith was taunted by other children and frequently skipped lesson that would involve him scaling any heights.

‘I couldn’t stand on a stool or step ladder or climbing frames,’ he said.

‘I remember getting out of doing PE when it was going to be gym based on the gym walls. It was very difficult and humiliating for me.

‘I was always avoiding things like swimming and jumping, I never did any of that.

‘I had safety strategies. If we went to the seaside I wouldn’t go and see the view from the clifftops.’

Mr Smith even turned down the chance to lose his virginity as a teenager after a girl reportedly tried to lure him up a tower.

‘Once when I was 15 a girl told me to follow her up to the top of a water tower. But I couldn’t make it up the tower’s ladder so nothing happened,’ he said.

And when he finally struck up a conversation with another girl he fancied, his heart sank when he watched her climb the stairs of the school bus.

Even after meeting his now wife, Mr Smith felt unable to be honest with her initially about his condition.

But Mr Smith did manage to pluck up the courage to propose to her on a church rooftop while on holiday in the Netherlands.

‘When I proposed, I wanted to summon the courage to do it but a passer-by said I looked absolutely terrified,’ he said.

‘Eventually Catherine worked it out by seeing how much of a mess I was whenever she asked if we could go up high places while on holiday.’ 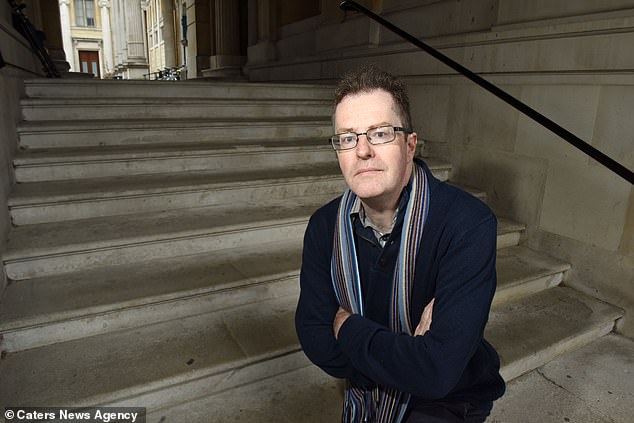 Mr Smith was forced to tackle his phobia head on when he was commissioned to write a book about England’s first hot-air balloon rider James Sadler. After finally undergoing therapy in his mid-40s, Mr Smith can now climb, or sit by stairs, and stand on a balcony, with ease

In 2014, Mr Smith was finally forced to face his extreme fear of stairs and heights after decades of avoiding social events where he may have to climb them.

‘I got a commission for work to go up in hot-air balloon so I thought I really had to overcome the fear,’ he said.

Mr Smith called on experts from around the world to help him face his phobia.

‘I’d been to see a clinical psychologist at Oxford University and found that being educated about my phobia helped a lot,’ he said.

‘A professor from Holland took me up to a tower in Oxford and made me lean over the handrail. That did the trick. I was able to start going up stairs remarkably quickly.’

When he eventually got in a hot-air balloon, Mr Smith found the experience ‘cathartic’.

‘For the first ten minutes I thought it was a dream and didn’t want to peer over the basket,’ he said.

‘I went up a church tower for the first time since I proposed to my wife this year and saw the view. I spent a huge part of my life missing out on views.’

Mr Smith is speaking out to urge others with a similar phobia to get help.

‘Intervention tends to work, efficiently and relatively quickly,’ he said. ‘So admit it, reject the shame, suspend your safety strategies and seek some help!’