A comedian found a very unorthodox means of seeking revenge on her insurance company after she was denied funding for treatment for her chronic vomiting condition… by exhibiting the effects of the disorder and throwing up right outside its offices.

Sandy Hoing, 29, from New York, recorded herself puking outside of her insurance company’s local HQ after it refused to pay for treatment for gastroparesis,  a condition where your stomach is partially paralyzed and can’t empty itself in a normal way, causing chronic vomiting.

And while puking your guts out isn’t the traditional way of appealing a denied treatment coverage, Sandy felt like she had run out of other options.

Sandy, best known for her role in the show Three Busy Debras took to YouTube to record herself repeatedly hurling outside of an Anthem Blue Cross Blue Shield office in hopes of appealing the decision.

Sandy Hoing, 29, a comedian from New York, took to YouTube to share a video of herself puking everywhere while confronting her insurance company 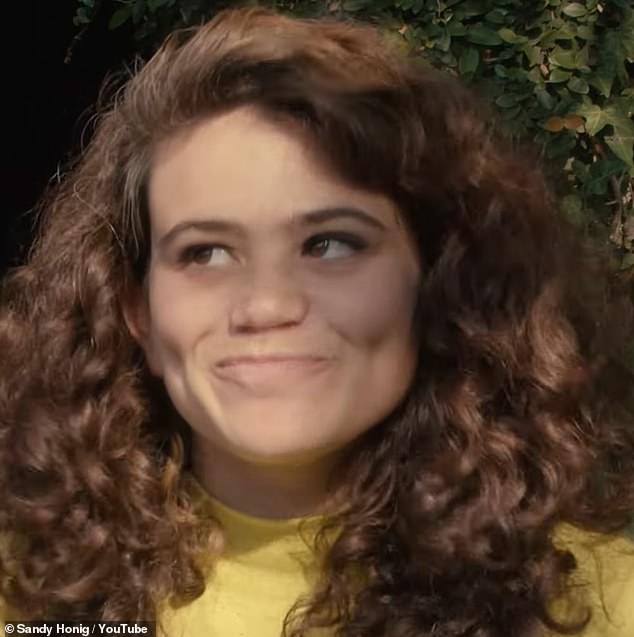 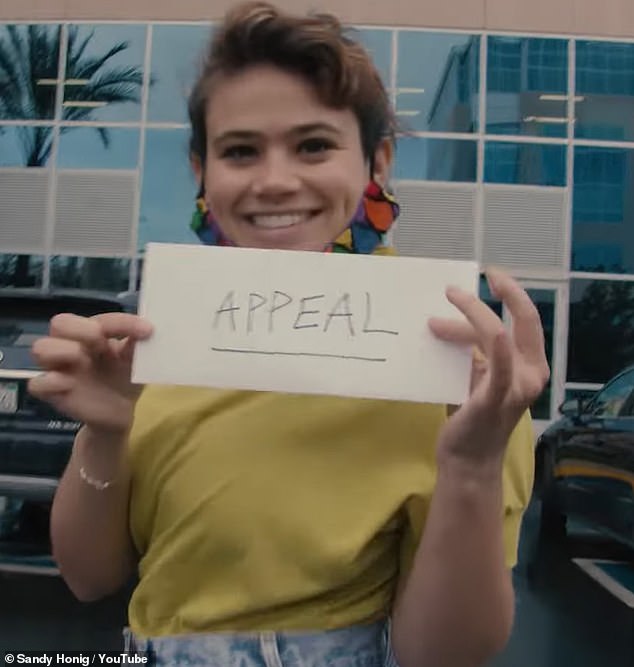 The comedian said she desperately needs treatment for her condition, which causes her to vomit ‘almost everything’ she eats.

One popular treatment option is a Botox injection in the pyloric sphincter, the muscle that connects the stomach to the small intestine.

And while Hong claimed the treatment was medically necessary, Anthem denied coverage of the procedure, resulting in her staging a vomit-filled protest outside their office.

In the confrontation video, which garnered over 20,500 views, Sandy shows herself making her way to the company’s Los Angeles headquarters and even tries to get into the building, but is soon denied as she ‘doesn’t have an employee badge.’

Despite not being able to puke her guts out in the office of an insurance employee, Sandy made sure the message was still loud and clear by puking in the envelope of the letter she addressed to Anthem.

‘Nobody would take my letter, but they said I could mail it with any relevant documentation,’ she says in the video before she throws up into the envelope.

Sandy even spoke to two different people outside desperately trying to find someone who worked at the insurance company, and while she didn’t find an Anthem employee, she still left quite the impression.

While in the middle of her conversations, Sandy let out a big burp and proceeded to hurl her guts up, which resulted in one man driving away and another screaming out, ‘oh my God.’ 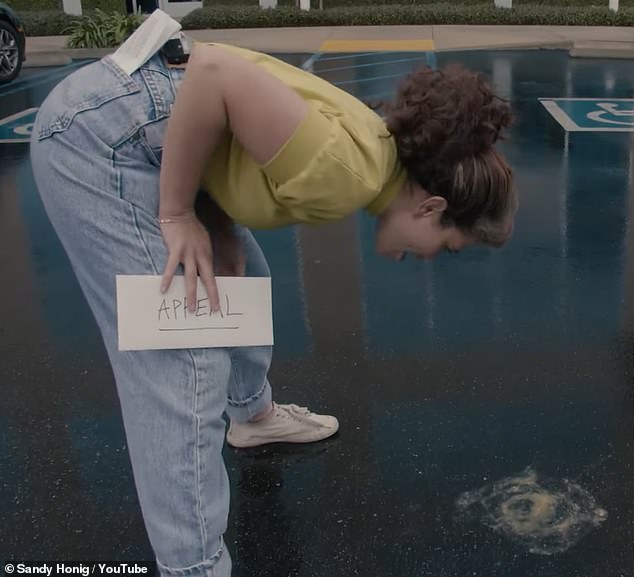 The comedian said she desperately needs treatment for her condition, which causes her to vomit ‘almost everything’ she eats 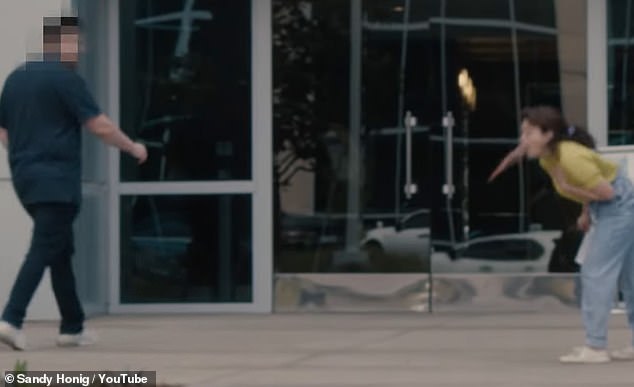 Sandy even spoke to people outside to find someone who worked at the insurance company, and while she didn’t find an Anthem employee, she still left quite the impression 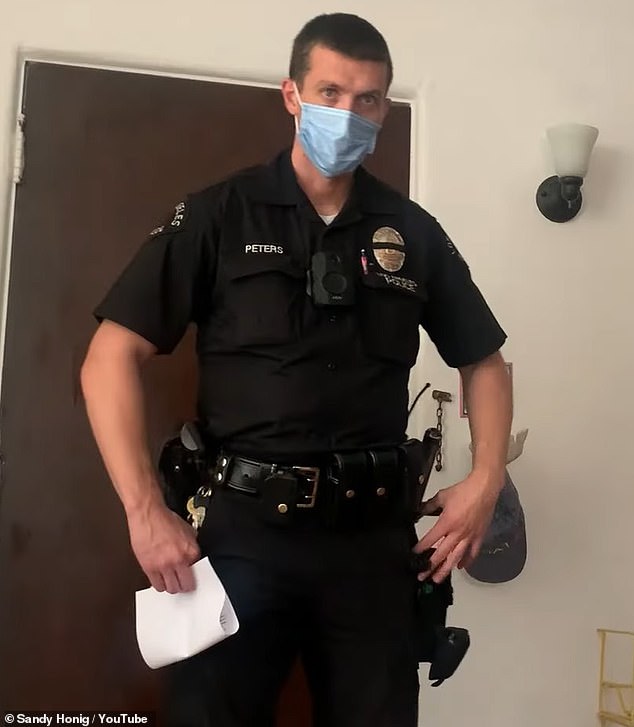 After she tried to appeal her insurance company’s decision, Anthem sent LAPD to her home for a wellness check 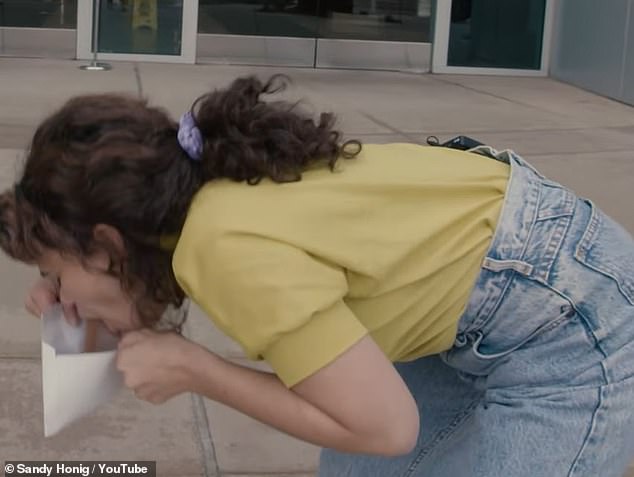 Breaking down the condition that left Sandy hurling her guts out: What is gastroparesis

In response to her attempt to send a message with her puke, Anthem called the LAPD, who showed up to Sandy’s house for a wellness check.

In the video she says: ‘It was such a lovely surprise to get a visit from two men armed with guns and batons in my own home.

‘It’s nice to know that even though you won’t give me the healthcare I need, you still care.’

Sandy even shared a glimpse of the police report which contained the words ‘poss 5150’, which is a police term used to describe placing someone in an involuntary psychiatric hold.

It also read ‘conducted a wellness check’ and the phone number for the Los Angeles County Department of Mental Health.

When Sandy shared her video and experience on Twitter, Anthem responded and requested she email them so a representative could ‘look into this.’

And it seemed like Sandy’s hurlfest worked when the company said they ‘feel awful’ and are ‘looking into it’, but less than two hours later Sandy revealed she received a phone call from an employee who once again told her the procedure wasn’t medically necessary.

‘I guess now is the time for me to admit it IS cosmetic.

‘I just turned 30 and want the inside of my stomach to look younger,’ she jokingly tweeted.

Twitter users have responded to Sandy’s vomfest by calling out the insurance company as being ‘evil’ for not covering her procedure.

Twitter users have responded to Sandy’s vomfest by calling out the insurance company as being ‘evil’ for not covering her procedure.

‘It’s just so evil. They shouldn’t be able to mess with peoples lives like that,’ said one user.

Another user added: ‘Shoutout to @AnthemBCBS for probably violating HIPPA by reporting you to the police over a medical appeal. Cool and good society we’ve got.’

‘The only good thing about this disease is the puking on demand, congrats,’ wrote one user.

Another user commented: ‘If you work for an insurance company…quit. Or at least secretly plot to bring them down from the inside.’