Atlas, a massive comet five times the size of Jupiter and about half the size of the Sun, will appear brighter than Venus from Earth by the end of April.

The exact size of the rocky icy core of the strange comet isn’t known but is likely only a few miles across – but it has a much larger atmosphere.

It’s currently close to Mars’ orbit but is increasing in speed as it makes its way towards the Sun and will make its closest approach to Earth in April.

When it gets towards the inner solar system it will become one of the brightest objects in the night sky and potentially the ‘comet of a generation’.

This stunning image of comet C/2019 Y4 ATLAS was taken by Michael Jäger on March 18, 2020  and shows its bright green hue. The exact size of the rocky icy core of the strange comet isn’t known but is likely only a few miles across – but it has a much larger atmosphere

Since it was first discovered in December the gaseous envelope surrounding the comet has ballooned in diameter to a staggering 447,387 miles.

It poses no danger to Earth as even at its closest point it will be more than 72 million miles away from our planet but will be very bright.

Atlas has a tail about the same size as its atmosphere, according to Michael Jager from Austria – who captured images of the object.

According to a report by SpaceWeatherArchive it isn’t unusual for a comet to grow so large as they ‘spew prodigious amounts of gas and dust into space’.

‘Comet 17P/Holmes partially exploded and, for a while, had an atmosphere even larger than the sun,’ according to the astronomy website. 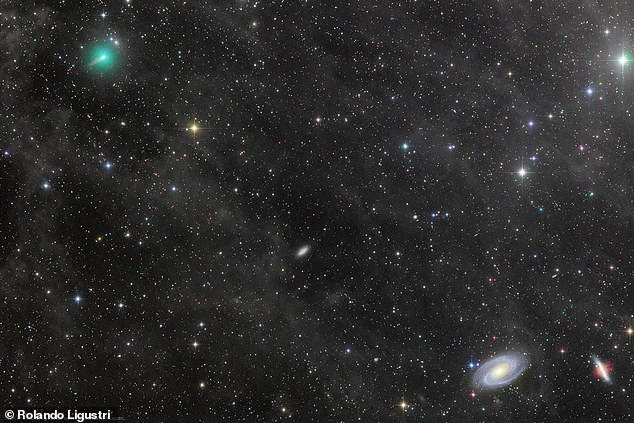 The green Atlas comet can be seen in the top left of this image captured from a remotely operated observatory in New Mexico on March 18. At lower right are M81 and M82, well-known as large, gravitationally interacting galaxies

‘The Great Comet of 1811 also had a sun-sized coma. Whether Comet ATLAS will eventually rival those behemoths of the past remains to be seen.’

It was discovered by the Asteroid Terrestrial-impact Last Alert system (ATLAS) in Hawaii and takes its name from the initials of the system.

The last bright comet visible without a telescope in the northern hemisphere was Hale-Bopp in 1997 – making this a ‘rare event’ for astronomers.

When it was discovered on December 28, 2019 it was faint and required a telescope, but as it comes closer it is getting brighter and can now be seen with binoculars. 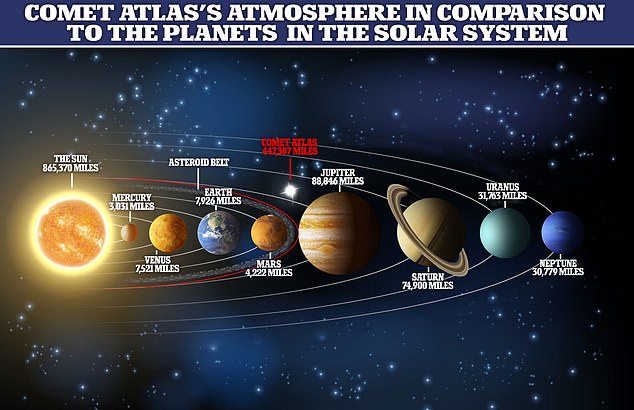 Its glow will be amplified by the Sun the closer it gets  and is already brighter than astronomers expected it to be at this point.

‘It’s pushing towards a level that by the end of April could look really, really stunning.’

Atlas is currently the largest ‘green object’ in the Solar System and its colour comes from diatomic carbon – a molecule commonly found in comets.

It emits a beautiful green glow when in gas form in the near-vacuum of space.

It has seen a 4,000-fold increase in brightness since it was first discovered and could be visible to the naked eye by the end of April.

When it was originally spotted, the comet was in Ursa Major and appeared 398,000 times dimmer than stars that visible to the naked eye from Earth.

It’s currently shining like an 8th magnitude star – that is invisible to the naked eye but easily spotted by garden telescopes.

It is getting brighter rapidly as it approaches the Sun, astronomers say.

‘That’s why it’s brightening so fast,’ he added.

“As they get closer to the sun they gas off this material and we get this amazing display, Brown told the Times.

‘It’s already at a level of brightness that you can see through binoculars — this beautiful greenish halo around it and a bit of development of the tail.’ 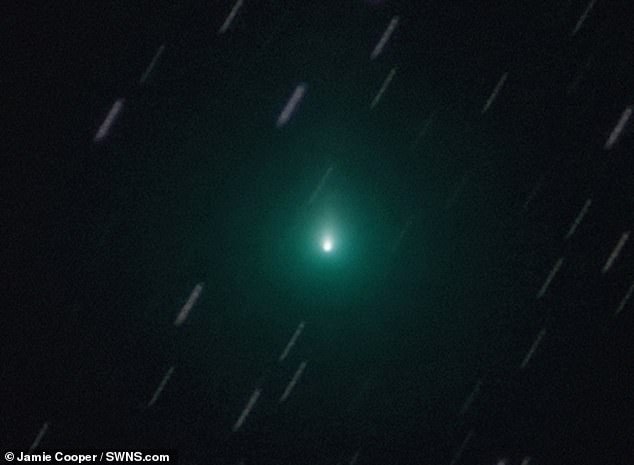 Astronomer Matthijs Burgmeijer said if it becomes as bright as the highest estimates it will be the most spectacular comet since records began.

‘How bright will it get? the estimates are from a conservative magnitude +2 (visible to the naked eye) to a spectacular magnitude -11 which would make the comet the brightest comet since records began,’ he said.

‘We simply have to wait and see how it will develop over the coming weeks. Comets are notoriously unpredictable.

‘Like Comet Ison some years ago that also had promising characteristics but disintegrated before it could give a good show.’

To survive long enough for it to be visible as a bright light in the sky it would need to be able to hold on to its ice.

To do this it would have to have a large nucleus with a store of frozen gas – something astronomers can’t confirm at the moment.

If it doesn’t have a large nucleus it will likely ‘run out of gas’ leading to it crumbling and fading as it approaches the Sun, according to SpaceWeatherArchive. 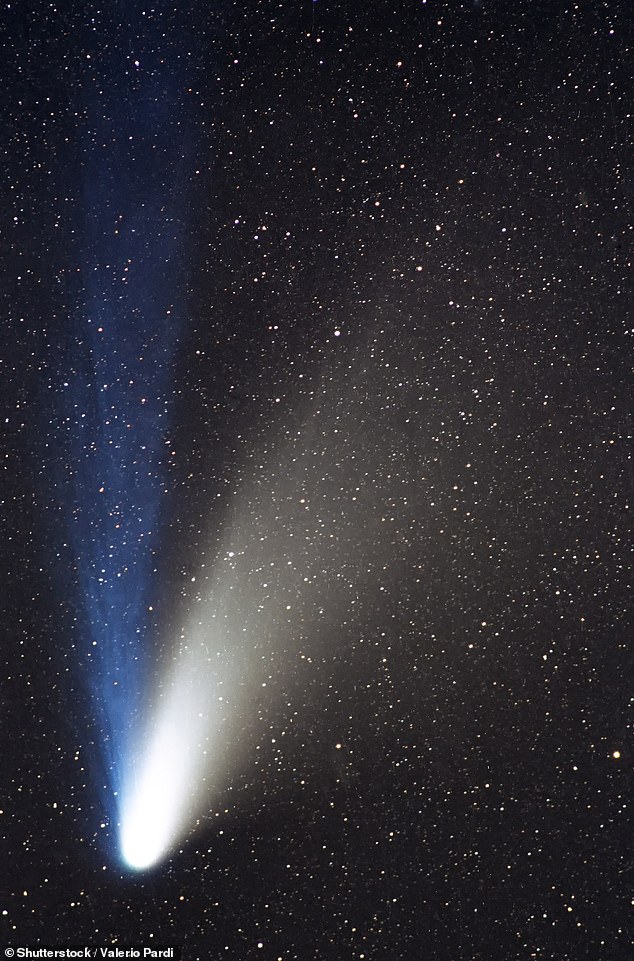 Comet Hale bopp in the night sky was the large, bright comet visible to the naked eye in the northern hemisphere

Battams is not optimistic it will survive, he said it will likely break up before it reaches the brightest point from Earth.

‘My personal intuition is that Comet ATLAS is over-achieving, and I wouldn’t be surprised to see it start to fade rapidly and possibly even disintegrate before reaching the sun,’ he says.

There is some speculation this could be related to the Great Comet of 1844 as it follows a similar trajectory and orbit.

Its trajectory would require a 6,000 year orbit around the Sun that would take it beyond the outer edges of the solar system – about 57 billion miles from the Sun.

Astronomers predict Atlas and the Great Comet both broke off from a much larger comet born in the early days of the solar system.

If it does last until it gets near the Sun it may be a one time shot as it could be expelled from the solar system completely after slingshotting around the Sun.

In the meantime, when it gets dark it will be visible halfway up in the north-northwest sky and potentially visible with the naked eye from April.

‘It’s going to be fun the next few weeks watching Comet ATLAS develop (and provide a nice distraction from the current state of the world), Carl Hergenrother, a comet observer based in Arizona, wrote. ‘Here’s to good health and clear skies!’