Commanders’ Brian Robinson is medically cleared and could return THIS WEEKEND just five weeks after being shot in attempted carjacking, as head coach Ron Rivera calls his chances ‘very promising’

Commanders running back Brian Robinson could make his NFL debut this weekend just five weeks after being shot in the leg and hip in an attempted carjacking.

Washington coach Ron Rivera revealed Monday that Robinson had been medically cleared to play, and will practice Wednesday following his scary ordeal in August.

Once Robinson starts practicing, Washington will have 21 days to put him on the active roster (or put him on injured reserve), but Rivera said there’s a ‘very good chance’ his return could come as soon as Sunday if he continues to progress.

‘We’ll see how he handles it,’ Rivera told reporters Monday.

‘We’ve got to see how he reacts to contact ’cause we will have a padded practice on Wednesday. He’ll get to bump around a little bit — and we’ll see how he handles that and then we’ll go from there.’

Robinson was shot on August 28 as two suspects tried to steal his car as he left a seafood restaurant.

The rookie reportedly managed to wrestle a gun away from one attacker but was shot in the leg and lower hip by the other, with the team putting him on the reserve/non-injury list after.

Robinson’s recovery from the incident, however, has been encouraging.

He said on Instagram that ‘surgery went well’ after the shooting and was at the team’s practice facility doing drills two weeks later.

This week, Week 5, was the earliest that Robinson was eligible to be activated and Washington now looks sets to do so. 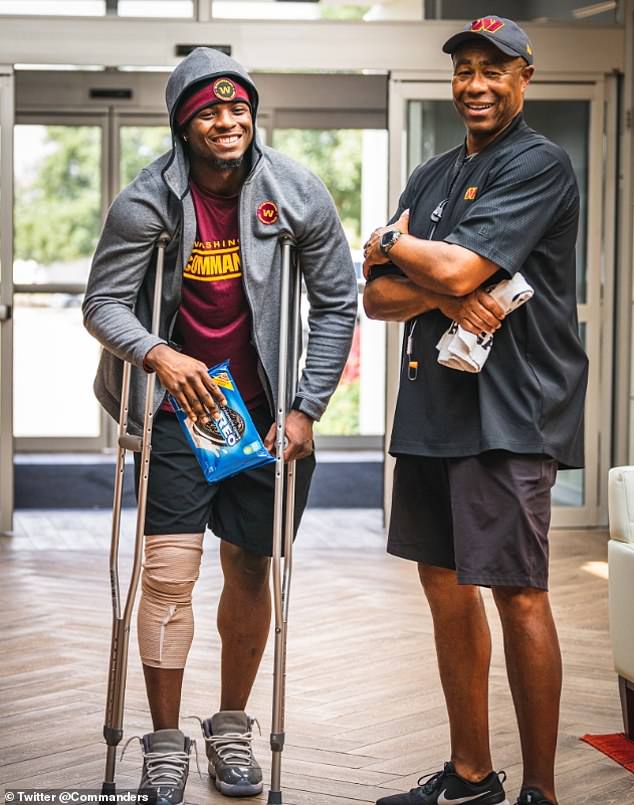 Robinson has now been cleared to play after his scary ordeal, according to coach Ron Rivera

The former Alabama back was projected to be the team’s starter as training camp wound down.

And even if he’s not given that type of workload right away, his return will surely be an offensive boost for a struggling 1-3 Washington team.

‘It’s hopefully gonna be a nice shot in the arm,’ Rivera said.

‘Hopefully we get what we were expecting to get, and that’s the other quality running back that we’re looking for.’