‘This is dangerous to the players’: Commentators blow up as slow-motion security guards impersonate Souths’ defence by letting pitch invader run riot at WIN Stadium

It was harder to tell which was slower last night, South Sydney players trying to chase down a Dragon who’d just made a line break, or the security guards at Wollongong’s WIN Stadium.

Their slow-motion response when a fan invaded the field during the Dragons v Rabbitohs NRL match on Thursday night has been mocked by fans and commentators alike.

Incredible vision shows the invader having the time of his life, dancing, diving over the tryline and jogging to where ever he pleased while security just walked around behind him.

In the end, Dragons prop Blake Lawrie had to do security’s job for them, grabbing the intruder and helpfully pushing him into the arms of the guards.

One fan posted on Reddit that security was ’emulating the impenetrable defence of the 1st half Bunnies’.

‘Security should lose their jobs over this TBH [to be honest]. hopeless,’ another fan posted.

The incident occurred in the 53rd minute of the game when South Sydney fullback Blake Taaffe was collected high by Dragons forward Jaydn Su’A, prompting referee Grant Atkins to blow a penalty.

Boos rang out from the crowd and it was initially thought Dragons fans were angered by the whistleblower, until Fox Sports sideline commentator Matt Russell said they were actually set off by a pitch invader.

‘That booing wasn’t for anything play-related, it was for an invader who has now been on the field for about 35 seconds,’ he said.

‘He’s scored a try at the southern end, now he is doing a hip jiggle in the middle of the field.

It seemed like an eternity as play stopped and players stood waiting for a very lackadaisical security outfit to corral the invader.

‘What we need, we need the Happy Dragon [mascot] to lay him out like the great, late Andrew Symonds. That would get a bit of social media buzz,’ commentator Dan Ginnane said. 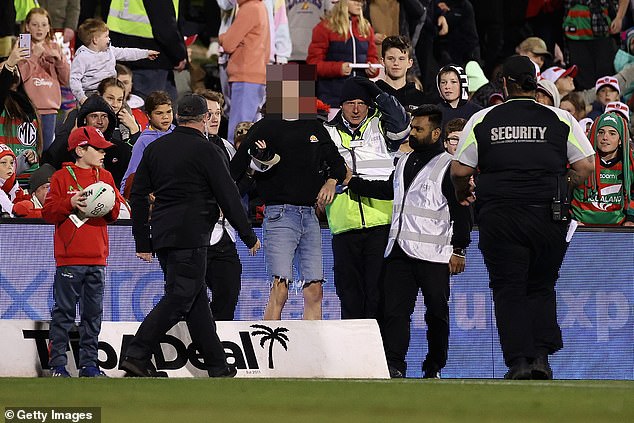 Russell was incredulous with the amount of time it was taking to get the invader off the field.

‘He deadset has spent 60 seconds on the field. He ran to the southern end, he ran back toward the northern end and only now is he being taken towards the [sideline].’

The invader even managed to get within touching distance of the waiting footballers.

‘He almost got a selfie there with one of the Dragons players,’ Ginnane said.

‘Very laconic there at Wollongong security.’

‘Grant Atkins, he’s enjoying it, having a little giggle there,’ Ennis added.

On the Channel Nine Coverage, Mathew Thompson and Phil Gould said the incident had the potential to be a lot worse because security were taking so long.

‘Well that’s a waste of cash and I think a life ban for making an absolute goose of himself,’ Thompson said.

‘All right, the intruder is being removed. It took long enough.

‘We’ve seen a lot of this [pitch invasion] this year and it is dangerous to the players.’

‘Who’s to know what he is carrying? They took their time getting to him,’ Gould added. 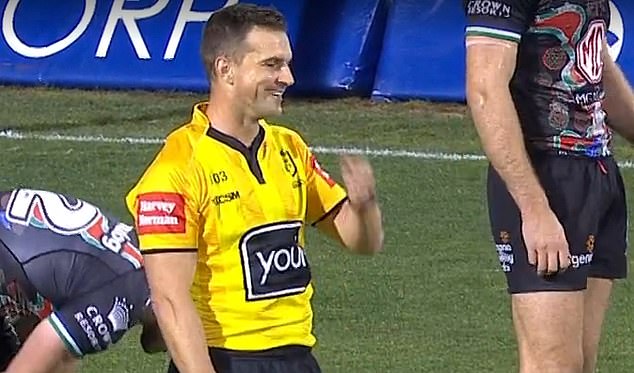 Referee Grant Atkins could see the funny side, although some commentators and fans believe the response should have been faster to avoid a potentially dangerous incident

While most fans were having a laugh online, one Reddit user agreed that pitch invaders should be taken off the field with more urgency.

‘Seriously, though, that invader got all the way up to the Dragons line,’ they posted.

‘All he had to do was have a knife and that could have got really bad.

‘We really, really need to start taking this more seriously instead of a bit of a laugh.’