Coronavirus crisis? It must be time for parliament to take a break! Fury as House of Commons goes on two-week recess from tomorrow despite worldwide pandemic as MPs condemn plans to ditch ‘virtual’ sittings and make them attend

The House of Commons is set to go into recess for nearly a fortnight from tomorrow as the coronavirus crisis rages, prompting fury on social media.

Parliament will break up for ‘half-term’ after Boris Johnson and Labour’s Keir Starmer face off at PMQs, and will not meet again for nearly two weeks as the death toll climbs above 35,000 and after dire economic forecasts.

MPs have only been back for a month after Easter, but will now return to their constituencies during a pivotal time when the Government must surely be held to account for its decisions in the coming weeks.

Politicians scrapped their February break last year to get Brexit done, but have not made a similar move here, causing outrage on social media.

The pause in sittings comes amid a massive row over Commons Leader Jacob Rees-Mogg’s plans to end ‘virtual’ sittings after June 2.

The Commons is currently using a ‘hybrid’ set up which allows 50 MPs to attend proceedings in the chamber while up to 120 can take part remotely using Zoom video conferencing software.

But Mr Rees-Mogg said last week that MPs have a ‘responsibility’ to return to Westminster following the recess, pointing out that it is impossible to scrutinise ministers fully without being physically present.

The call sparked a political firestorm as politicians demanded to know how they can safely stick to social distancing rules, while Commons Speaker Sir Lindsay Hoyle has insisted he will suspend proceedings if he believes the chamber is too crowded.

Sources close to Mr Rees-Mogg told MailOnline some elements of the virtual Parliament would be kept, such as remote select committees, and options were being explored to allow shielding MPs to participate.

‘The House has done a commendable job in building that stop gap from scratch, but there’s no denying proper scrutiny and sufficient progress on legislation has not been possible in the past few weeks,’ they added.

However, Opposition MPs have stepped up their opposition to the move today.

Chi Onwurah warned that if MPs are forced to return to Westminster they risk becoming 650 ‘super-spreaders’.

In questions to the ruling House of Commons Commission, the member for Newcastle said: ‘The digital Parliament has been a huge success.

‘But now the Leader of the House wants to abandon it and instead insist that 650 MPs – potential super-spreaders – to travel from across the country to cram into Westminster putting constituents and staff at risk.

‘Why would the Government choose to ignore its own advice that those who can work from home should? 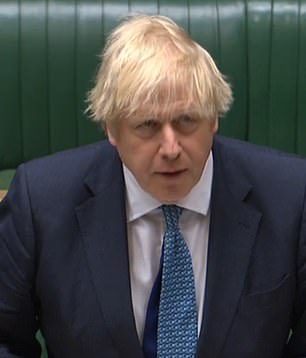 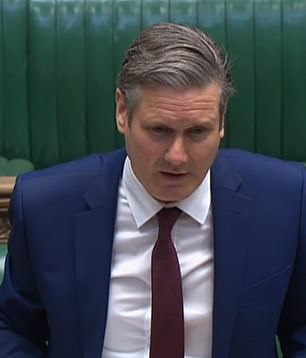 Another Labour MP, Rupa Huq, suggested the ‘indecent haste’ in returning to Westminster was so Tory MPs could prop up Boris Johnson during PMQs.

Dr Huq said: ‘Is there any reason why the Government seems in such indecent haste to rush back to the bad old days unless it’s to disguise the drubbings that the PM’s getting every Wednesday from our new leader with having a few more of his own around him to cheer him on?’

SNP MP Carol Monaghan said it was ‘almost impossible’ to go 10-metres without having to touch a door handle in Parliament.

The House authorities insisted they were ‘doing everything possible to ensure that we do become a Covid-19 secure workplace’.