Mystery surrounds what happened to a dead echidna found impaled on a fence in North Queensland.

Townsville resident Kim Williamson came across the grisly discovery along North Shore Road near Bushland Beach in the the city’s northern beaches on Saturday.

The horrified resident took a photo and posted it on social media to express her anger.

She believes the ‘poor, defenceless animal’ was picked up and killed.

‘It has died a horrible death trying to get itself off,’ Ms Williamson wrote.

‘If you know of any idiots boasting about doing this, report them. I for one want justice for this poor darling animal.’

Ms Williamson took the echidna to a vet surgery, which told the Townsville Bulletin that the echidna was most likely hit by a car before being mounted on the post.

‘I was the person who removed the echidna and it was very clear to me that the cut was directly related to the post and the echidna would have had to have been alive at some stage while on that post,’ Ms Williamson posted afterwards.

‘For that to happen whereby it has cut into her as she has scrambled to get herself off. It had no other injuries to its body but that cut where she as bleeding from. It is a main road, 90 plus km speeds. If it was hit there would have been trauma. It’s always better to assume that people do the right thing but in this case, I know what I saw.’ 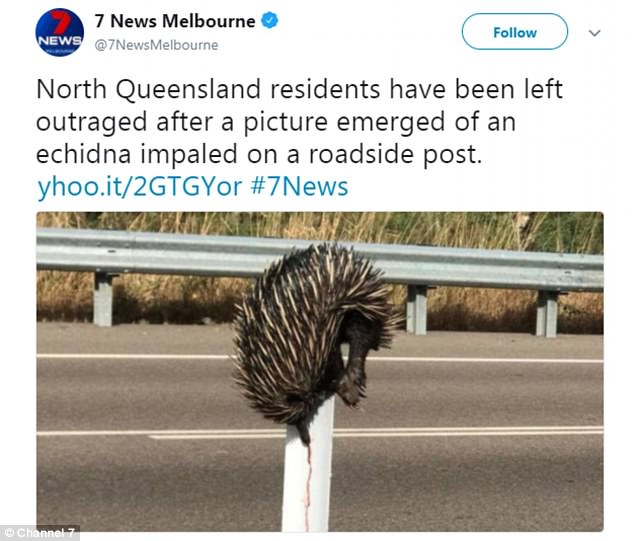 The incident has not been reported to Queensland Police or the RSPCA.

‘While the act of mounting a dead animal doesn’t constitute animal cruelty, it is extremely inappropriate and unnecessary and causes a great deal of distress for the public,’  RSPCA chief investigator Daniel Young told the Townsville Bulletin.

People on social media expressed their shock over the photo, where many hope whoever is responsible is tracked down to face the consequences.

‘This is heartbreaking to see and it’s more heartbreaking how the law is lenient on animal cruelty including destruction of their natural habitats,’ one woman tweeted.

Another added: ‘Why the hell would anyone do this? What goes through their brains to think this was ‘entertainment’ or ‘funny’ So many sick b******s today……it’s scary. 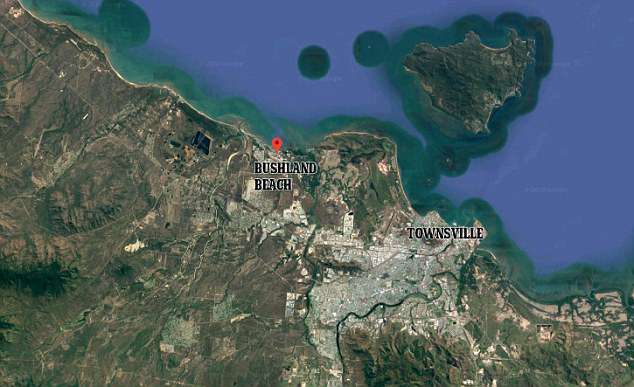 The echidna was found on Saturday in the Townsville suburb of Bushland Beach along North Shore Road, which is a main road