Angry commuters on their way home from work have taken fire at an inconsiderate young mother.

A photo of the woman lying across three seats on a peak-hour train leaving Sydney’s Town Hall was uploaded to social media on Thursday evening.

The mother has drawn the ire of people commenting on the photo, who have slammed her as ‘obnoxious’.

The woman can be seen sprawled across three seats with her hand covering a fourth.

In the walkway next to her is a pram, appearing to block a man from walking past.

In the photo, four people can be seen standing around her, each of which could have sat in one of the seats she had taken up.

According to New South Wales Government’s public transport website, discourteous behaviour such as obstructing the walkway or taking up more than one seat can result in fines.

The picture was uploaded to Reddit on Thursday night, saying the  train left the station at 6pm.

Some people commented on the photo, calling the young woman ‘obnoxious’ and a ‘loser’

Some people commenting on the picture suggested the woman had punished herself.

‘It’s obnoxious but I think she’s the loser in this situation for making so much contact with those seats, ew,’ one person wrote.

‘Next time sit really close to her. You have to fight fire with fire,’ wrote another.

But others had more pressing matters at hand, like questioning why the pram was abandoned.

Another person suggested the baby was in the custody of the Department of Community Services.

But one viewer supported the young mother, suggesting that the train didn’t look that busy and they should have just asked her to move.

The picture continues an annoying trend witnessed by many commuters, after a photo of a man without shoes who took up six seats by propping his feet on headrests emerged earlier this week. 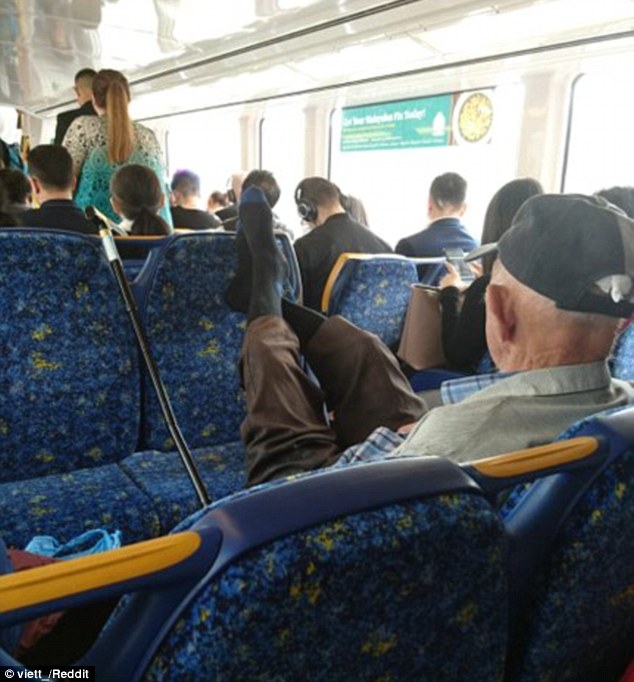 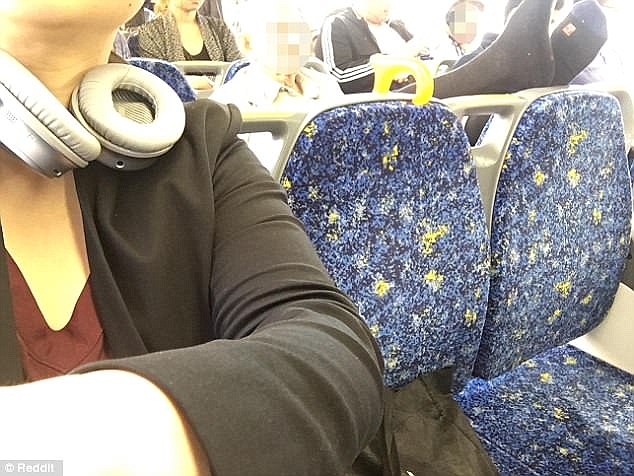 In May, another woman posted of her experience with the man on Reddit with the caption: ‘This guy decided to squish me this morning’