The number of trains skipping stops at stations has surged, causing mayhem for passengers.

A Daily Mail audit of official figures reveals that hundreds of trains are ‘part-cancelled’ every day.

Commuters on the worst affected lines have seen the number of services missing stations on the route jump by more than 40 per cent.

A train is considered to be part cancelled if it covers more than half of the scheduled journey and either fails to run the whole journey or fails to make a scheduled stop at any station along the way.

Trains completing their scheduled journey but arriving at their destination two hours or more late also count as a part-cancellation.

In what will be seen as another sign of the UK’s dysfunctional railways, operators are increasingly instructing drivers of late-running trains to miss out stops so they can reach their destination on time or less late.

According to figures from the Office of Rail and Road, there were 136,767 part-cancellations in the year to April, or 375 a day.

CrossCountry saw a 28 per cent rise in part-cancellations. Virgin Trains West Coast registered a 21 per cent increase, Merseyrail 20 per cent, ScotRail 23 per cent and Northern 18 per cent.

Part-cancellations can be particularly frustrating for passengers if they are given no notice. In many cases, they board a train only to find it speeding past their stop.

This type of disruption is likely to have increased over the summer because the figures cover the period before the botched introduction of a new timetable on the rail network in May, which caused thousands of delays and cancellations. 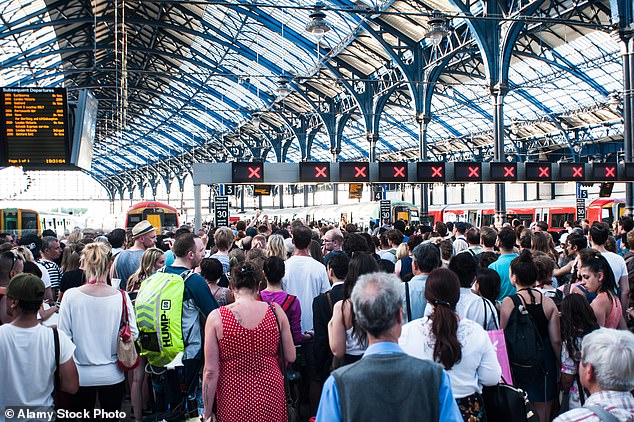 Virgin Trains West Coast registered a 21 per cent increase in cancellations, Merseyrail 20 per cent, ScotRail 23 per cent and Northern 18 per cent [File photo]

David Sidebottom, of the independent watchdog Transport Focus, said: ‘Passengers have the right to expect the destination outlined in the timetable will be the one they are taken to.’

West Midlands Trains said there were a number of spells of bad weather that affected its services including the ‘Beast from the East’.

A spokesman said these changes are advertised in advance, adding: ‘We will always aim to get as many people to their destination as possible, and during disruption or bad weather, running some express services can help in timetable recovery.’

Gary Cooper, of the Rail Delivery Group, which represents the rail industry, said: ‘The rail industry is investing in improvements across the network to deliver on our commitment to boost punctuality.’