London commuters are suffering travel chaos as trains into London Waterloo have been disrupted, on top of severe delays on two tube lines, the overground, TfL rail and Thameslink.

National Rail reported disruption between London Waterloo and Clapham Junction, which will be expected to continue until 11am.

One frustrated commuter tweeted: ‘Only 6.29am and already a disaster on SWRail. Kicked off our train at Raynes Park now stuck on the platform. No information. What is going on?’

One frustrated passenger claimed commuters were ‘kicked off’ a train (pictured) at Raynes Park at 6.29am and were left ‘stuck on the platform’ with ‘no information’ 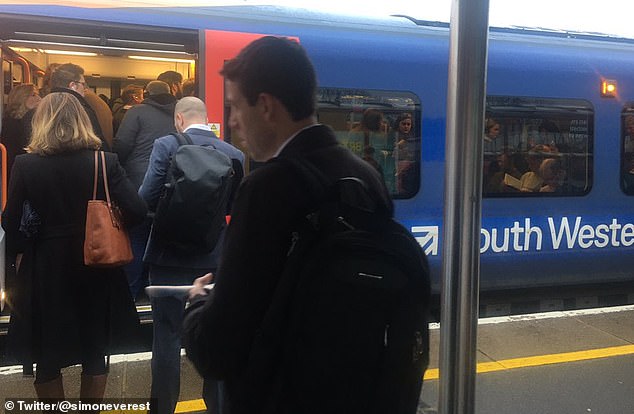 A picture tweeted by a commuter, captioned: ‘Problems happen of course, but the way they are handled is so poor.’ There is disruption between Waterloo and Clapham Junction

There are also severe delays on the District Line between Earl’s Court and Wimbledon, alongside minor delays between Edgware Road and Earl’s Court, caused by a signal failure at Parson’s Green.

A faulty train at Finchley Road has sparked further severe delays on the Metropolitan Line.

On the overground there is no service between Hackney Downs and Chingford due to planned engineering work.

London Overground also warned of severe delays from Liverpool Street to Chingford, Enfield Town and Cheshunt, due to late running of engineering works in the Ilford area.

Thameslink said services remain disrupted in both directions between London and Bedford this morning, due to a fault with the signalling system, which Network Rail technicians are investigating. 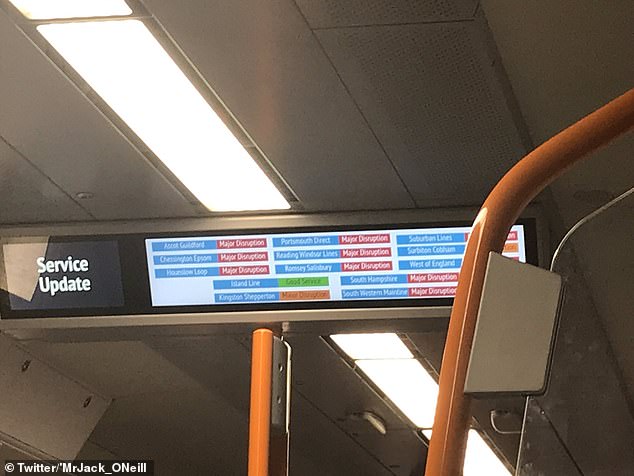 One social media user posted a picture showing a service update, captioning: ‘Yep, pretty good service you have there @SW_Help’ 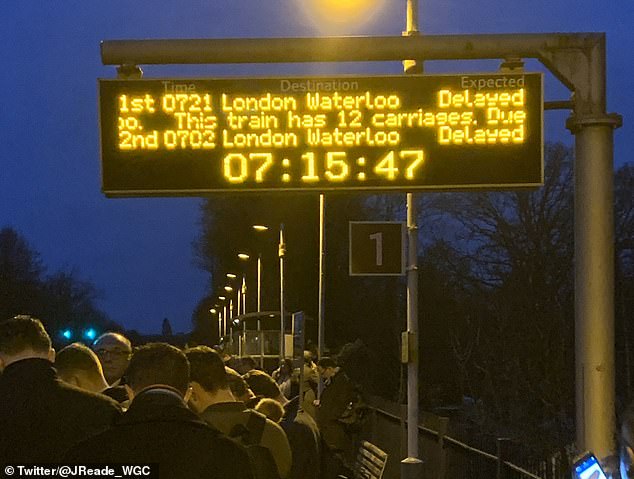 The 7.21am and 7.02am services to Waterloo were delayed (above). National Rail said disruption between Waterloo and Clapham Junction is expected to last until 11am 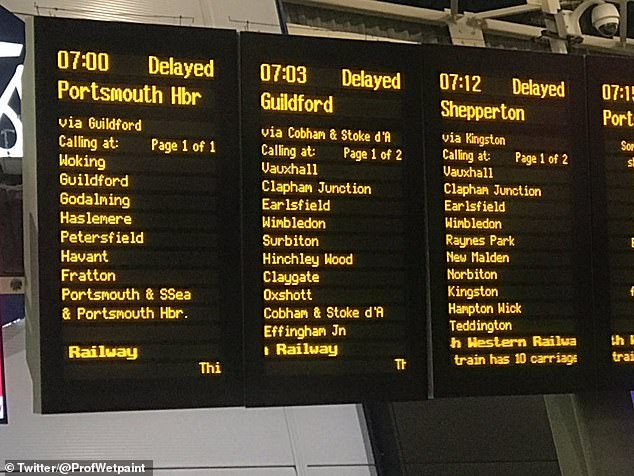 Three South Western Railway services to Portsmouth Harbour, Guildford and Shepperton were also delayed. The image was captioned: ‘Knock me over with a feather @SW_Help’

London commuters reacted to the travel disruption on Twitter, with one posting: ‘Problems happen of course, but the way they are handled is so poor.

‘Rubbish information, and then a massive fight to get compensation, particularly when, as with today, trains are too busy to board…’

Another tweeted an image of London Liverpool Station, where trains are no longer being disrupted, writing: ‘Going underground! Well hopefully at some point.’

A third posted a picture of commuters standing up in a crowded train, captioning: ‘The joy of @SW_Help commuting’. 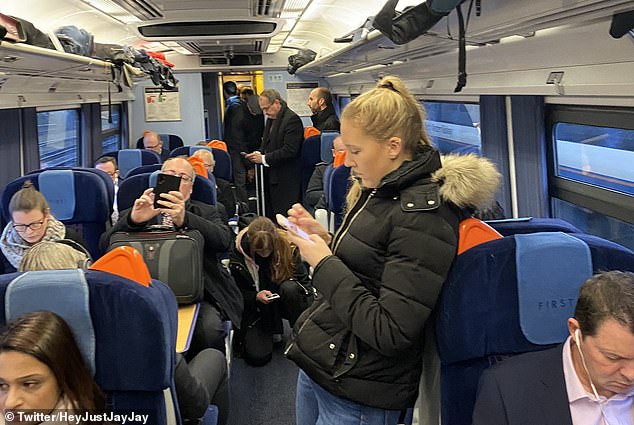 Another Twitter user posted a picture of commuters standing up in a crowded train, writing: ‘The joy of @SW_Help commuting’ 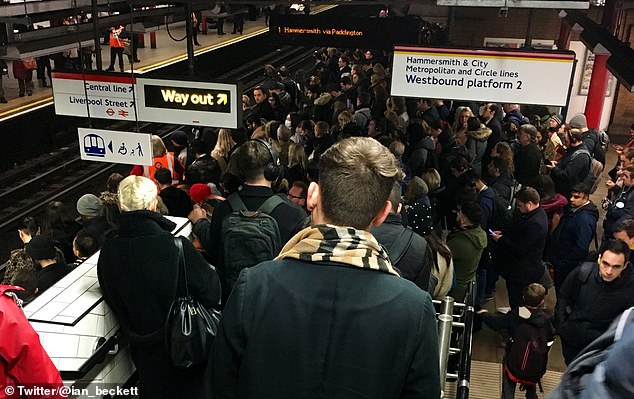 A view from the bridge down onto a crowded platform at London Liverpool Street station. The commuter tweeted: ‘Going underground! Well hopefully at some point’

Rail passengers at a train operator threatened with government action because of its poor service suffered fresh disruption today due to a series of breakdowns.

The problems followed a survey earlier this week showing SWR passengers recorded the lowest value for money satisfaction in the country.

A number of incidents caused Thursday’s delays including a late finish of Network Rail night engineering work, leading to lines being blocked between Clapham Junction and Richmond during the height of the morning peak.

There was also a signalling problem at Woking which blocked some lines into London, with trains cancelled, delayed or revised, and a power failure between Dorking and Raynes Park.

Services were still being disrupted after a freight train derailed earlier in the week between Southampton and Winchester.

The Department for Transport is preparing contingency plans which could see a new short-term contract with SWR’s owners or transferring the operations back into state control.

A TfL spokesperson said: ‘We apologise to District line and Metropolitan line customers for the disruption to their journeys this morning. This was caused by a signal failure at Parsons Green and a faulty train at Finchley Road.

‘Our engineers worked as quickly as possible to fix the issues and we are now working to restore a normal service.’

Train services operated by South Western Railway (SWR) could be taken into public ownership due to losses made by the franchise, Grant Shapps announced last week.

Poor punctuality and reliability combined with slower revenue growth has led to the operator’s financial performance being ‘significantly below expectation’ since the franchise began in August 2017, the Transport Secretary said.

The franchise, owned by FirstGroup and MTR, made a pre-tax loss of £139 million in the year to March 2019.

SWR have ‘not yet failed to meet their financial commitments’ but the Department for Transport ‘must prepare suitable contingency measures’, Mr Shapps explained in a written ministerial statement on January 22.

Potential options include issuing a new short-term contract to SWR’s owners – FirstGroup and MTR – or transferring the operation of trains to public-sector body the Operator of Last Resort.

The OLR took over services on the east coast route in June 2018 under the London North Eastern Railway brand, following the failure of the Virgin Trains East Coast franchise.

Mr Shapps said SWR will ‘continue to operate as usual with no material impact on SWR services or staff’.

He added: ‘Across the country, a number of franchises are failing to provide the reliable services that passengers require and there are legitimate questions on whether the current franchising model is viable.

‘Keith Williams – who is leading an independent review into the railways – has already stated that franchising cannot continue in its current form.

‘His review will propose sector-wide reforms which aim to put passengers at the heart of the railway.’