Tens of thousands of London commuters faced a chaotic journey home tonight after two trains became stuck on the track due to multiple power failures.

Southeastern said disruption on routes in and out of South London and Kent would continue until at least 6pm at the height of the Friday night rush hour.

Passengers with children travelling into London Victoria were stuck on trains with overflowing toilets for up to three hours as engineers fought to get services moving. 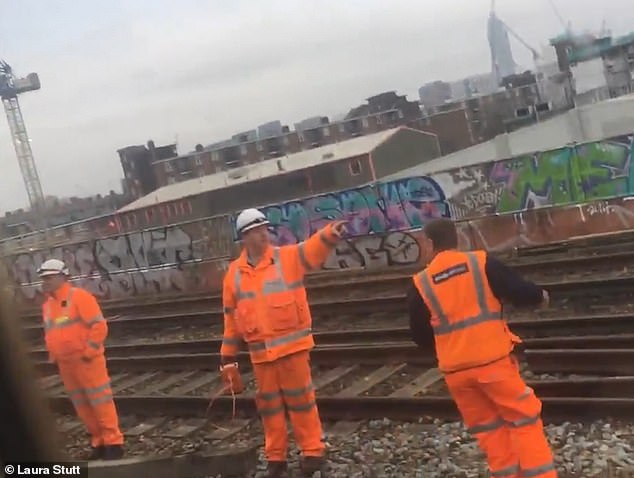 Travellers were fuming – both on the stuck trains and on other services – with Jordan Armitage tweeting: ‘Black Friday, or as Southeastern call it, usual Friday service.’

Rachel Allen added: ‘Another great journey on the 2.24pm London Bridge to Orpinton. Stuck at Grove Park waiting for train crew… You are hopeless.’

And an irate Paul Bennett said: ‘How can one broken down train cause so much troubles? Is the power back on? When will services be resumed?’

The first train to break down was the 9.42 service from Victoria to Dover Priory, which stopped just outside of the London terminal and blocked three platforms. 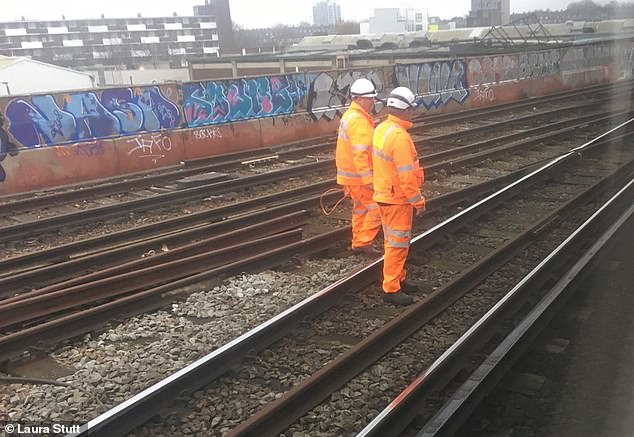 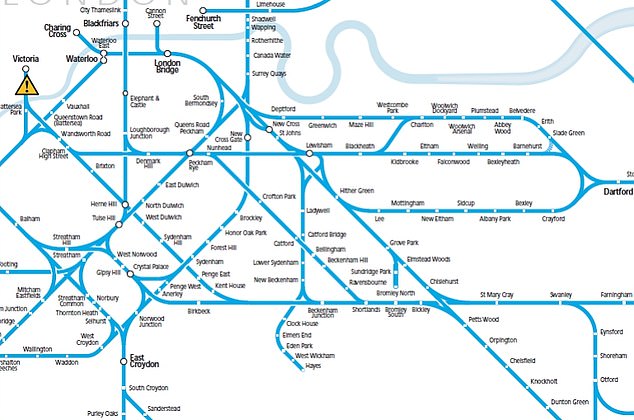 Network Rail advised travellers that the train had become ‘gapped’ – meaning it was stuck over part of the track which does not have a power supply.

In addition, the 11.20am from Gravesend to London Victoria also became ‘gapped’ – with the 10.18am from Dover Priory to Victoria then stuck behind it.

The 10.18am train then moved to Clapham High Street, where the driver changed ends, and was able to take the train into Victoria as a passenger service.

Network Rail said: ‘We’re very sorry for today’s disruption after two trains became stranded when they lost power, which blocked all lines in and out of Victoria station.

‘Our staff worked incredibly hard to get passengers moving again. We were able to move the first train to partially reopen the station by 2.20pm. We got the second train on the move shortly after by using a rescue train to push it into Victoria.

‘Some trains are still running to alternative London destinations while the congestion clears, however disruption is expected until around 6pm. Tickets are being accepted on Tubes, buses and the Southeastern High Speed service.’

Victoria sees more than 75 million journeys made in a year – with an average of 207,000 passengers passing through each day.

It comes four days after hundreds of thousands of commuters endured ‘Monday mayhem’ on another day of rail chaos thanks to over-running engineering works.

Hundreds of journeys were affected on South Western Railway, Southern and Thameslink, with all SWR trains cancelled between Surbiton and London Waterloo.

Several stations usually packed with rush-hour commuters were closed in the morning peak, including Woking, Surbiton, Raynes Park and Earlsfield.

Last month, a new train tore down cables on a test run, and thousands of passengers were left stranded as services in and out of London Paddington were cancelled.