Commuters are braced for travel chaos this morning after a fuel spillage caused a number of crashes on a busy motorway last night.

Around 21 miles of the M3 have been closed after the incident, with cars slipping on the fuel-soaked northbound carriageway.

Several cars were damaged in the accidents and it is currently unknown if anyone was injured.

Motorists face traffic chaos on the M3 after a fuel spillage, pictured, caused 21 miles of the motorway to be closed 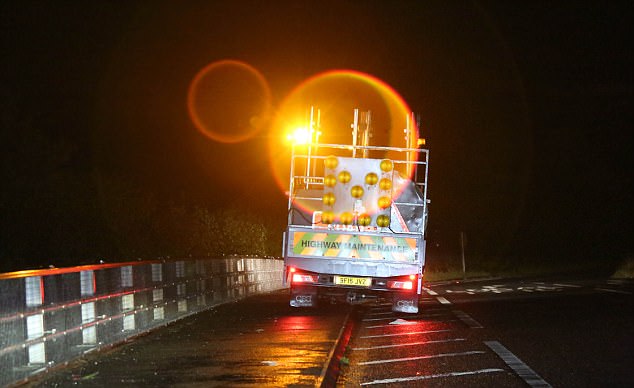 A clean-up operation is underway, pictured, but police say the closures may still be in place for commuters in the morning

The closures are in place from junction 9, south of Basingstoke, Hampshire, to 4a at Fleet, Hampshire, with tailbacks all the way to Winchester, Hampshire, because of the spillage which was declared a ‘major road incident’ by traffic police.

Commuters were warned to check their morning route to work as closures may still be in place.

A spokesman for Hampshire Constabulary last night said: ‘The M3 motorway northbound is currently closed between junctions 9 and 4a due to a major diesel spillage from a vehicle travelling on the road.

‘A number of collisions have occurred following the spillage, which emergency services are currently dealing with.

‘The road will be closed until further notice, so we would advise motorists to avoid this area and seek an alternative route.’ 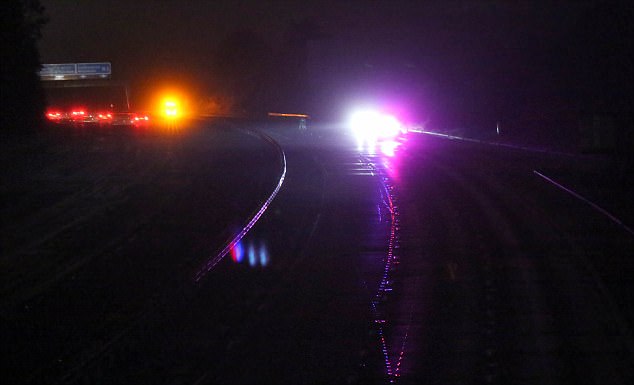 The motorway, pictured tonight, was closed between junction 9 near Basingstoke and junction 4a at Fleet, both in Hampshire

Highways England added: ‘The road is closed following a substantial oil spillage which has resulted in a number of collisions.

‘An extensive clean-up operation is required to clear the oil spillage and vehicles involved in the collisions.

‘Road users intending on using the M3 eastbound through Hampshire are urged to plan ahead and consider alternative routes, if possible and should allow plenty of extra time for their journey.’