Commuters not wearing face masks have again packed on to crowded Tube trains despite Sadiq Khan vowing services are running at 75 per cent capacity.

Huge numbers of travellers struggled to socially distance on the Jubilee Line and at Canning Town during rush hour today as nearly 100,000 people used the service.

The Mayor said Tubes are running at 75 per cent but unions rubbished this, warning it was just 50 per cent.

In a move that will force even more passengers on to the cramped public transport system, London’s congestion charge was reimposed on Monday – two weeks early.

The £11.50 daily levy for people driving into the centre of the city was suspended on March 23 and will increase to £15 from next month.

Data from this morning already shows road traffic in the capital down by four per cent on last week, before the charge was brought back.

It comes as Mr Khan launched an investigation into the deaths of 33 Transport For London staff – including 29 bus drivers – from coronavirus.

The study will see TfL work with University College London to ‘better understand the pattern of coronavirus infections and deaths among London’s bus workers’.

The Mayor again failed to prevent overcrowding for commuters on the Tube (pictured, Canning Town), with people packed together during the morning rush hour today 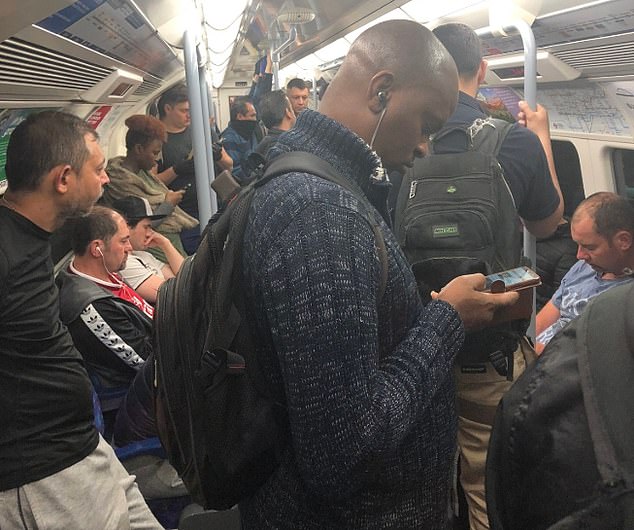 Huge numbers of travellers struggled to abide by social distancing rules on the Jubilee Line (pictured) and at Canning Town, with many not wearing masks for protection 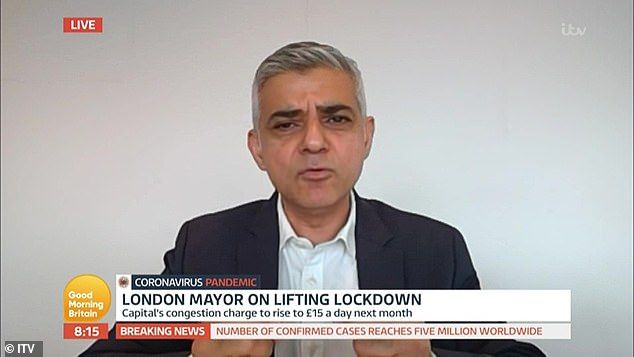 A staggering 99,233 people used the Tube between 4am and 10am today, roughly the same as yesterday and nearly 2,000 more than on Tuesday.

Many commuters were pictured not wearing masks, but Mr Khan today revealed passengers could be banned from the Tube and buses if they do not wear them.

The Mayor said he hopes to persuade the Government to change its position on the issue, but he has the option to ‘make it mandatory in London only’.

Existing guidance from TfL only goes as far as advising passengers to wear face coverings, which is in line with nationwide policy.

Mr Khan told the London Assembly: ‘Next week I’ll be considering whether I need to use the option I’ve got to make it mandatory.’

He said he will lobby the Government in a bid to ‘reach a sensible compromise’, as he noted that some train services in London are not under his control. 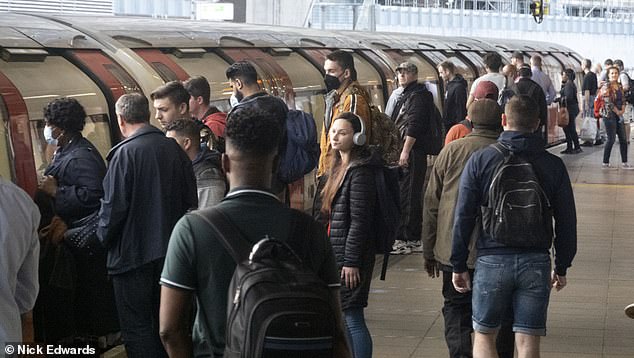 The Mayor claims services (pictured at Canning Town) are running at 75 per cent but unions rubbished this, warning it was more like 50 per cent 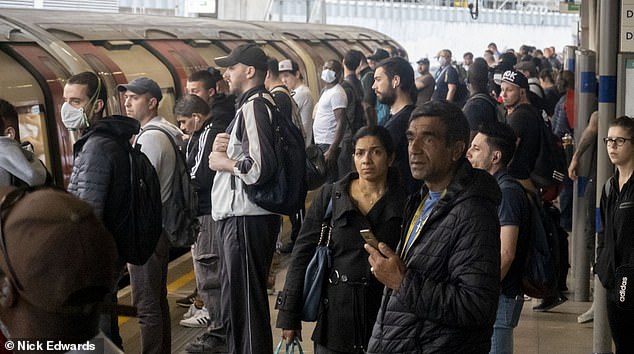 He said: ‘We don’t want confusion. When there is a crisis, what’s important is to have message clarity.

‘I leave the option available, which is to make it mandatory in London only. But I’m hoping we can persuade the Government to do the right thing.’

The Mayor faces pressure from a major train drivers’ union which claimed the Tube was only running at 50 per cent capacity, rather than at 75 per cent TfL says.

The system may get even more crowded in the coming days as the congestion charge was re-imposed on Monday and the cost will be increased, sending commuters to the underground and buses for cheaper transport.

The £11.50 daily levy for people driving into central London was suspended on March 23 when the lockdown was announced.

Next month the fee will rise to £15 and the hours of operation will be extended from between 7am and 6pm on weekdays to 7am and 10pm every day.

It was reintroduced as part of a billion-pound government bailout to secure emergency funding for TfL so Tube and bus services could be kept running until September. 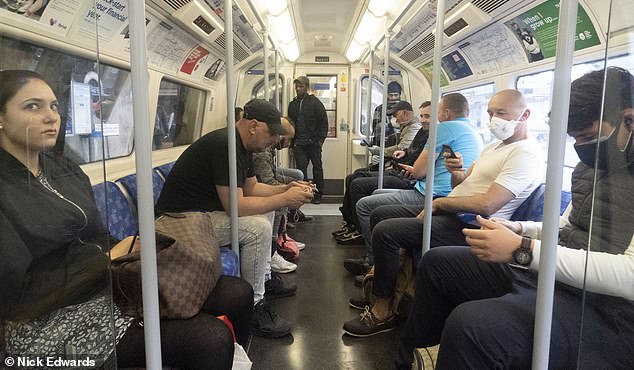 In a move that will force more passengers on to the cramped public transport system (pictured at Canning Town), London’s congestion charge has been reimposed 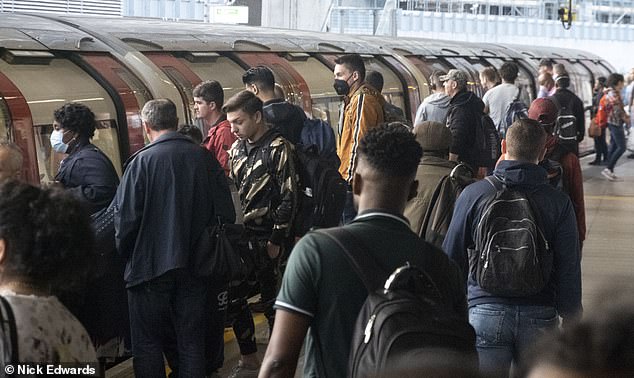 TfL claimed during peak hours this week it has run over 75 per cent of Tube services on average across the whole network. But MailOnline understands train drivers told ASLEF, which represents most Tube drivers, TfL is still running a reduced timetable (pictured at Canning Town today)

But the decision to make police officers pay the charge when other key workers are exempt was described as a ‘slap in the face’.

Chairman of the Metropolitan Police Federation Ken Marsh said officers should not be ‘penalised’ for travelling to their shifts.

He said: ‘Since the beginning of this pandemic, police officers in London have worked tirelessly to keep the public safe at no small risk to themselves.

‘To be told that they now have to pay the congestion charge when other key workers retain an exemption is a slap in the face to our brave colleagues.

‘At a time when we are being discouraged from using public transport to get to our places of work, this seems to go completely against Government guidelines.

‘We are pushing this matter with the deputy mayor for policing Sophie Linden as a matter of urgency.

‘Metropolitan Police officers should not be financially penalised for travelling to their shifts to keep the public safe.’

The congestion charge reimbursement scheme remains for NHS staff, ambulance staff and care home workers because there is a ‘greater need for them to travel to work by car to reduce the risk of them coming into contact with others, having been exposed to potentially high levels of infection’, according to the Mayor. 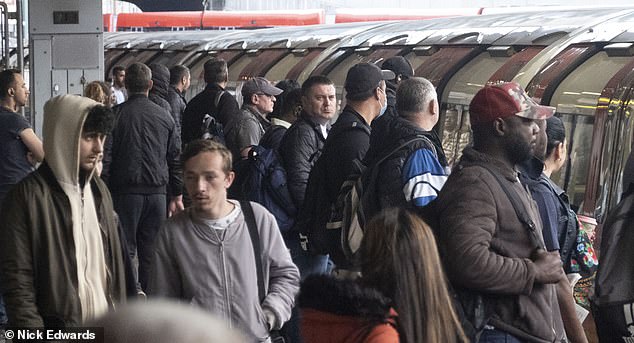 People trying to get to work queue up along the platform at Canning Town this morning, many not wearing masks 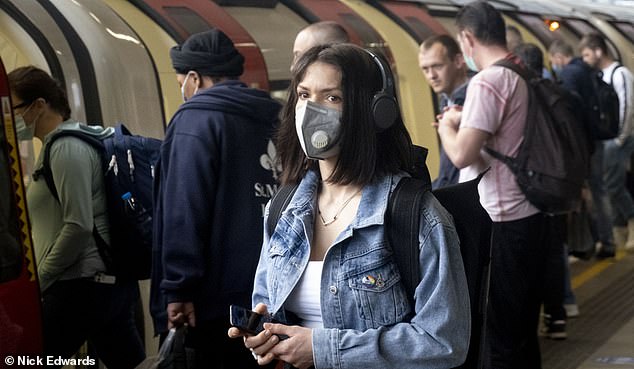 A spokesman for Mr Khan said: ‘The Government made TfL reintroduce the Congestion Charge and Ultra Low Emission Zone and urgently bring forward plans to widen the level and scope of the charge as a condition of the recent funding deal.

‘The police and all our emergency services have done, and continue to do, a phenomenal job in responding to the impact of Covid-19 on London.’

On GMB this morning Mr Khan pulled out a letter from Transport Secretary Grant Shapps, who he blamed for having to re-impose the charge.

He said: ‘This letter sets out the agreement this package is subject to the conditions set out in this letter, this funding package is conditional on agreement from TfL on conditions below and I’ll read to you: ”The immediate reintroduction of the London congestion charge LEZ and ULEZ and urgently brings forward proposals to widen the scope and levels of these charges in accordance with the relevant legal powers”.’

He added: ‘The government says we’ve got to widen the scope. (Who set the price and hours) It’s us it’s TfL.’

In the two-part study into the deaths of 33 TfL workers, Mr Khan said it would ensure every possible measure was taken to protect ‘our heroic staff’.

‘As the son of a bus driver, this is deeply personal to me,’ he added.

TfL said the independent study was commissioned after the ‘tragic deaths’ of the 33 workers including 29 bus drivers. 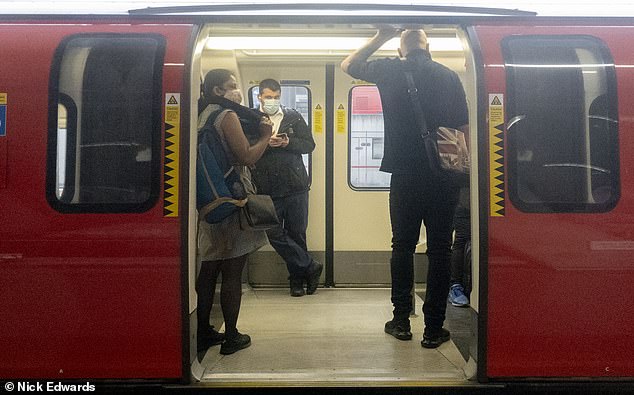 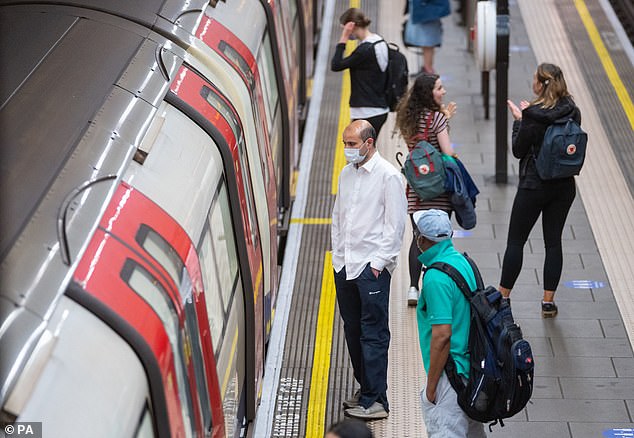 It comes 10 days after unions called for tougher safety rules in response to data published by the Office for National Statistics (ONS) suggesting bus drivers were among workers with higher rates of death from Covid-19 than other staff.

The first part, due to take place in coming weeks, will review measures including cleaning and social distancing put in place by TfL during the pandemic to restrict Covid-19’s spread.

The second part, which will be run over four months, will consider whether frontline transport workers are at greater risk of infection and death than the rest of London.

Mr Khan was grilled on the probe by Piers Morgan on GMB this morning, who said people working on public transport were operating in a ‘lethal death trap’.

The Mayor said: ‘I’ve asked TfL to get independent, world leading experts to review all the stuff we’ve done because I want to know in real time whether we’ve done the right things, whether there’s more we should have done and if there’s more we can do.’ 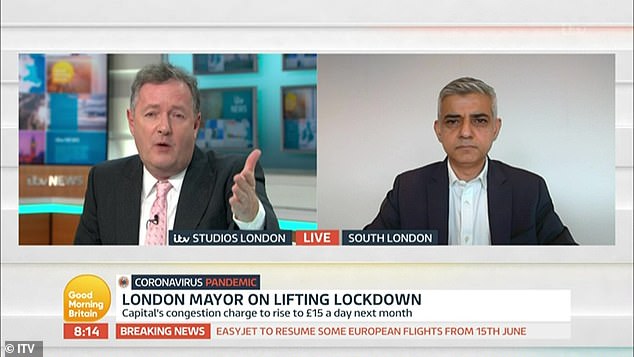 Mr Khan was grilled on the probe by Piers Morgan on GMB this morning (pictured), who said people working on public transport were operating in a ‘lethal death trap’

He added: ‘In relation to people that work on public transport it’s become a lethal death trap.’

Mr Khan claimed his team have made sure London has been ahead of the curve nationally and said safety measures on public transport are ‘over and above the measures across our country and other parts of the world’.

Mr Morgan questioned why so many TfL workers have died, with the Mayor replying that was why the report was commissioned to be done in ‘the next two to three weeks’.

He added: ‘One of the things we’ll look in to is whether there’s a link with the occupation and some of the measures we’ve taken but also whether there are non occupation hazards.

‘For example the economic status their age, gender, ethnicity, housing conditions. Whatever they recommend we’ll implement that.’

Social media users were quick to pile into the debate, with many criticising the London Mayor over his handling of the capital’s public transport. 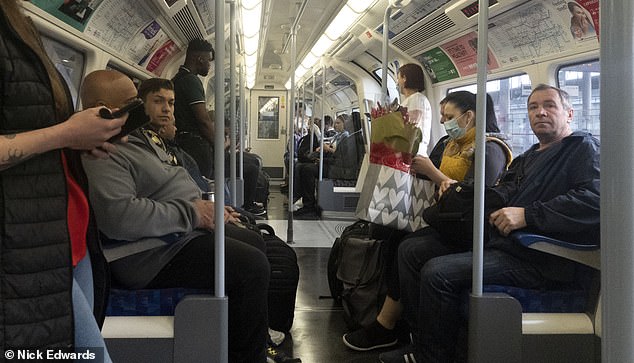 Mr Khan said it was ‘crucial’ demand for public transport remained ‘as low as possible’. But today at Canning Town (pictured), it remained busy 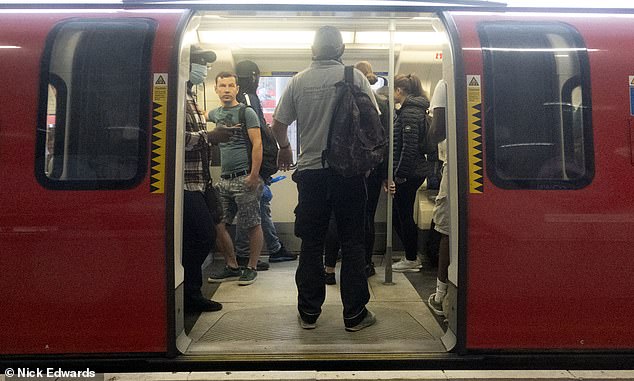 Britain’s train companies ramped up services from around 50 per cent of the normal timetable to 70 per cent this week to reflect eased coronavirus travel restrictions. But unions said it was more like 50 per cent

One tweeted: ‘Shut the tubes down. No buses that have front doors. Reduce services, even if we have to walk a bit to the stop.

‘You can therefore only have 12 people upstairs and 4 downstairs due to the cut off by the drivers.’

He added: ’16 people on a bus is social distancing. Not packed buses or tubes @SadiqKhan.’

And one man put: ‘Awful behaviour. I was surprised by how few passengers were wearing masks on the tube into central London this morning.’

A new study has laid bare how terrified passengers are of going on public transport during the current pandemic.

Four out of ten people said they will not use the services until they feel safe, according to findings from an independent watchdog. 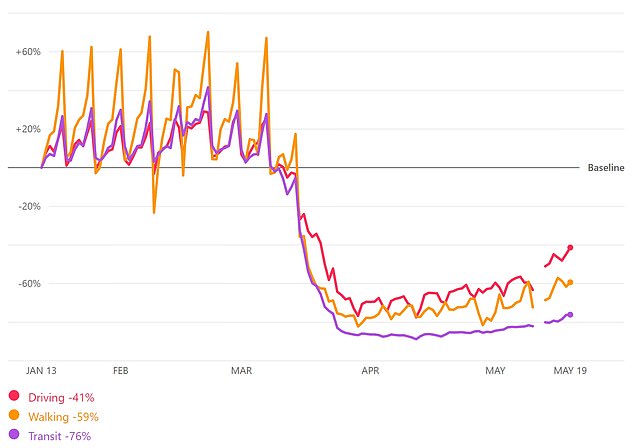 Data from Apple mobility trends shows the number of people driving, walking and in transit in the capital earlier this week is way down on normal levels, but is creeping up

Transport Focus polled 2000 people and found the number happy to use transport as soon as restrictions are lifted has gone down from 24 per cent in the first week of the survey to 18 per cent.

The latest findings show people are becoming increasingly concerned about social distancing and wearing masks or face coverings on buses and trains.

The majority also expect hand sanitiser to be available.

Transport Focus Chief Executive Anthony Smith said: ‘Governments and transport operators must work together to ensure people receive clear and consistent advice about travel: they need to know who can travel, what rules exist, what they have to do, and where to find information.

‘It’s important that steps are taken as the lockdown is eased to rebuild confidence so that this anxiety doesn’t result in people turning their back on public transport or our roads becoming more congested.’

Director of London TravelWatch Emma Gibson added: ‘Almost a third of Londoners are expressing unease about travelling on public transport once restrictions are lifted and nearly two thirds say that they are much more likely to work at home in the future.

‘This is much more than any other region in Great Britain and shows that Londoners are going to need a lot of reassurance before they get back on the Tube and start using buses again in much greater numbers.

‘Londoners are also much more likely than anywhere else in the country to say that they will wear a mask when out and about, reflecting a heightened nervousness about getting around.’