A company director vowed to throw acid in the face of his ex-girlfriend during a stalking campaign after he blamed her for the collapse of their American-themed dessert bar, a court heard.

Travis Holness, 30, began harassing Lauren Lockwood after they split up and he was left with debts of £30,000 due to the closure of their pancake and milkshake cafe in Handforth, Cheshire, after just four months of trading.

Over four weeks Holness bombarded 29-year old Miss Lockwood with unwanted phone calls in which she said he threatened to disfigure her with corrosive liquid.

He also turned up at a trendy hair salon where she was worked as a receptionist shouting: ‘You set me up. I’ll kick your head in.’

On another occasion Miss Lockwood, from Wilmslow, was driving home with her mother when Holness who is thought to have been following her in her Mercedes used his vehicle to block her in then tried to get her car keys from her. 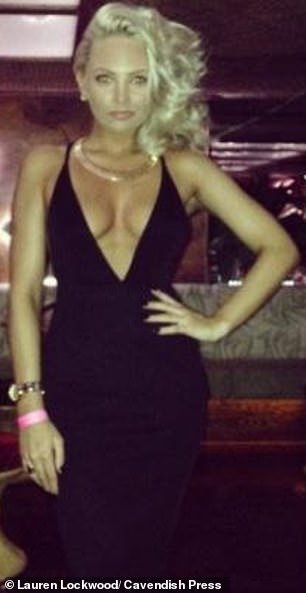 Travis Holness, 30, began harassing Lauren Lockwood, 29, after they split up and he was left with debts of £30,000 due to the closure of their pancake and milkshake cafe

He was arrested after a tearful Miss Lockwood went to police to report him twice in two days and asked for a restraining order.

At Manchester Magistrates Court Holness was convicted of stalking between May and June 2018 after a trial.

The court heard the couple who had been together for two years had opened their premises SugarBee in October 2017 after Holness got a £25,000 business loan and borrowed a further £6,000 from his aunt for fixtures and fittings.

But the couple split up the following month and the business closed in January last year amid spiralling costs.

Miss Lockwood told Manchester magistrates court: ‘I had the idea of opening a business together, he said it would sound good and would be something to work on. At the start it was all under Travis’ name and eventually he added my name as a director but I took my name off it.

‘At the start it wasn’t a nice premises, but Travis put a lot of hard work into it to make it what it was. He handled getting people in and all the money invested into the business came from Travis. It was going well in the first few weeks and had potential but the business stopped because Travis couldn’t pay and in January last year it closed – it was his responsibility..’

She said she was later working at HOB hair salon in Hale near Altrincham when Holness drew up outside in his black Mercedes and was seen pacing up and down outside.

Miss Lockwood added: ‘He got out the car and he came in and started talking really aggressively. He was saying ‘check her phone, she’s setting me up’. I haven’t got a clue what he meant by that. My manager told me to go round the back. I was backing off because I was scared.

‘Later I was taking my mum home when we drove past each other on the main road. I’ve gone into my estate and he must have gone the opposite way round, he’s come driving quite fast behind me and cut me off and blocked me in. He tried to get in the car and take the keys off me.

‘He used to threaten to come to my mum’s house and he left abusive phone calls. He said he’d come and kick the doors off, he rang the salon twice. He phoned me while I was at work and he said he was going to come and throw acid in my face.

‘I was just trying to be civil and the last thing I wanted was for him to get angry or lose his temper. There was time when he rang my phone 48 times.. I know his auntie loaned him some money for the business but he made me lose my job at the salon because I was causing danger to other members of staff.

‘He rang off unknown quite a few times because he knew I wouldn’t answer to his number. I just used to tell him to leave me alone and move on. The florist told me flowers I was sent were from him, there was a card and I asked the delivery guy and he said Travis sent them.

‘On one occasion he asked me as a friend to go out for something to eat with him, if I said no I knew he would get angry about it. But after I went out with him for his birthday I told him I never wanted to speak to him ever again.

‘Deep down I did think it was going to be successful business, credit where credit is due he did put a lot of work into it. I don’t think anything I did resulted in the business closing down. I walked away from Sugarbee completely – everything was in his name.’

Holness of Prestwich, Manchester denied wrongdoing and said: ‘She had the idea for the business and she wanted it as a joint partnership, but it was mainly for her and would be something for her to concentrate on.

‘She picked out the premise and the funding came from a business loan and it was £25,000. The repayments was about £400 a month and that was for five years but it was just myself on the loan.

‘In setting up the business we were OK, I was the director of the business and she was the second director and receptionist. It opened in October and sold pancakes, milkshakes, ice creams, it was mainly a dessert bar.

‘But the relationship broke down pretty badly. The main agreement was that when the business was set up she would take control but I wanted to keep the business going. Before it opened we got her brothers friends who were builders to come in and do the work, they did half the work and then we ran out of money. Due to that, because they were family friends, the relationship broke down.

‘It closed due to how she was acting. We’d argue and then I’d try to keep my distance, she’d turn up unannounced, I was always busy trying to run the business. I’d fallen into a bit of arrears but an agreement was made with me and the landlord, yet she was kicking off with staff members in the shop and causing trouble.

‘The locks had been changed and a member of staff couldn’t get in. I tried to lease up the business elsewhere but I couldn’t find anywhere.

The debts were up in the air, I didn’t know what to do or how to pay.

‘Between January and April, there was phone calls between us, but it was to see how I was and to see if we could work anything out. It was always civil. I also bought her a dog We were talking about what I was going to do about this debt. She was happy and normal.

‘I did go to her place of work but we didn’t have an argument – I thought that maybe I could speak to her and she could contribute, I wanted to let her know direct that she needed to contribute to this debt. I wasn’t aggressive. It was just ‘can I have a word with you?’.

‘I didn’t block her car in. I was going to meet a friend and she passed me.. We’d not had an argument, we were on good terms. I flashed and she pulled alongside me, I didn’t get out of my car. I just wanted to ask about how the debt could be paid off. She was hysterically crying, I didn’t want her to get upset so I said ‘forget it’ and I left.

‘I was receiving letters from the bailiff company and from the business group. Legally, she’s not responsible for any of the debt but morally yes. I’ve just been paying it off myself. She’s never offered to make any payment to the debt.

‘She’s made these allegations because of the debt. It doesn’t benefit me to get angry against someone who I need to support me.

She always called me and was crying down the phone asking if we could get back together. I know legally she doesn’t owe me anything.

All of this is a concoction.’

But prosecutor Mark Pritchard said: ‘This was a tale of a man engaging in a campaign against his ex-partner of harassment that amounts to stalking. Even if this was all about business money, that is not a defence. He said there was a moral obligation, but you can’t bring that to the court. She never agreed to pay towards the business and never said she would.’

Holness will be sentenced later this month.