A businessman who left a cyclist with a broken back after deliberately running him over has been jailed for more than two years.

Clifford Harper, 51, swerved his red BMW towards Peter Corfe in slow-moving traffic after the pair traded insults in Marylebone, central London on March 31.

Harper then got out of his car and threatened Mr Corfe, saying: ‘I will run you over again if I have to.’

The driver was identified after stunned witness took pictures of the car, while CCTV was recovered when he fled the scene.

He was jailed for two years and three months as a judge described it as a ‘deliberate, shocking, appalling piece of driving’.

Clifford Harper, 51, (pictured) swerved his red BMW towards Peter Corfe in Marylebone, in slow-moving traffic after the pair traded insults on March 31

Cynthia McFarlane, prosecuting, said the incident was seen by other drivers and a number of other witnesses.

She said: ‘In particular, one passer-by recalled hearing a male voice saying: ‘Watch where you’re going’ and then a car accelerating, a screeching noise.

Onlookers pleaded with Harper to stay with the stricken rider until police arrived, but he ‘ignored them and drove off’.

Harper was arrested on April 12.

In his first interview he told police the scratches left by the collision with Mr Corfe ‘had been there for years’ before offering no comment when the CCTV was played to him two months later.

He finally admitted the offence at a hearing earlier this month.

Sarah Iskarous, defending, said the married father and company director of a firm employing 150 people had ‘momentarily lost his mind’ after succumbing to the ‘stresses and pressures he had been facing in his life’ both personally and financially.

Harper was the sole provider for his wife and daughter and bankrolled the private care of his sick parents.

He had been on his way to see an ophthalmologist following a diagnosis of cataracts as well as other health conditions including the insertion of a metal heart valve giving him a current expected life span of just six more years. 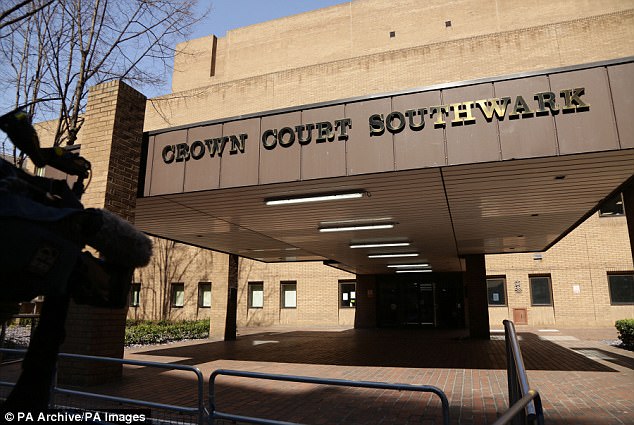 Ms Iskarous said: ‘An argument ensued with this cyclist resulting in a few angry words exchanged.

‘He tells me that this set him off into a rage and he lost his mind momentarily.’

Harper requested the chance to address the court personally from the dock before tearfully offering apologies to Mr Corfe and his family, along with his own.

Jailing Harper Judge Philip Bartle, QC, said: ‘I have seen the CCTV of the driving in question.

‘It is truly shocking.

‘There isn’t any doubt at all that what you did was to deliberately drive at Peter Corfe.

‘As a result of that deliberate intention to drive at Mr Corfe you knocked him off his bike and he fractured his spine.

‘It was, as I say, a deliberate, shocking, appalling piece of driving which has had devastating consequences for Mr Corfe.

‘I have read his victim impact statement, he records that he was in excruciating pain as a result of the injuries which you caused.

‘He was in hospital for nine days and it has taken considerable time for him to deal with those injuries.’

The judge told Harper he ‘entirely accepted’ the incident was ‘out of character’ as well as taking into account Harper’s ‘serious health problems’ and reliant relatives.

But he added: ‘You took a deliberate decision to try to run this cyclist down. You are fortunate that you didn’t kill him.’

He was jailed for two years and three months and ordered to pay £5,000 compensation to Mr Corfe.

Harper was also banned from driving for three years, handed six penalty points and ordered to take an extended retest when the disqualification expires.