Competition queen tells This Morning she’s won over £300,000 of prizes in 20 years

A competition queen has revealed that she’s won over £300,000 of prizes over the course of 20 years.

Di Coke, from Brighton, appeared on ITV’s This Morning and told how when she’s feeling really enthusiastic, she can enter up to 100 competitions a day – but says on average, it’s more like 20 or 30.

When presenter Eamonn Holmes questioned whether it’s a job or an addiction, the mother replied: ‘Do you know, some people can enter up to 300 competitions a day or more. If it is an addiction I think it’s actually a good one to have.

‘To be honest, it’s a hobby anyone can do and most of the time it’s free. It needn’t cost you any money and getting the prizes is absolutely fantastic.’

Di Coke (pictured), from Brighton, appeared on ITV’s This Morning and told that she’s won over £300,000 of competition prizes over the course of 20 years 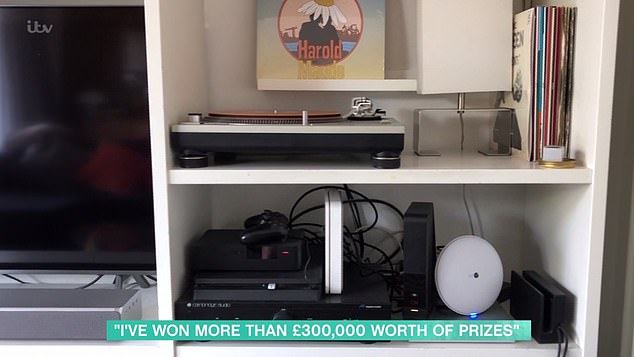 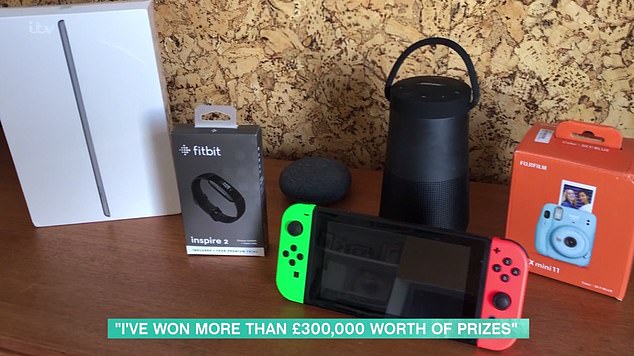 Di said it’s ‘such a great experience to win anything, even if it’s a small prize’ because it ‘adds a little bit of excitement to your life.’ Pictured, some of the prizes she has won

It’s such a great experience to win anything, even if it’s a small prize it adds a little bit of excitement to your life.’

Explaining the first thing she won that started the thought process that she’s good at entering competitions, Di explained: ‘Back in the 90s, I used to love going to music festivals but I didn’t have enough money to go to them all.

‘So I started entering competitions in newspapers and magazines back then – it was before the internet really got popular.’

‘I just used to send off postcard entries and instead of just sending a plain postcard, I’d stick photos on, I’d draw on them sometimes – just to make my entry standout.

I used to win all the competitions I entered. I won backstage passes at the Reading festival, Glastonbury – and I was winning them for my friends as well as myself. It started from there.’

I started entering different competitions. I won a guitar signed by Noel Gallagher. I won my first trip abroad to Dublin, then to New York, and to Iceland.’ 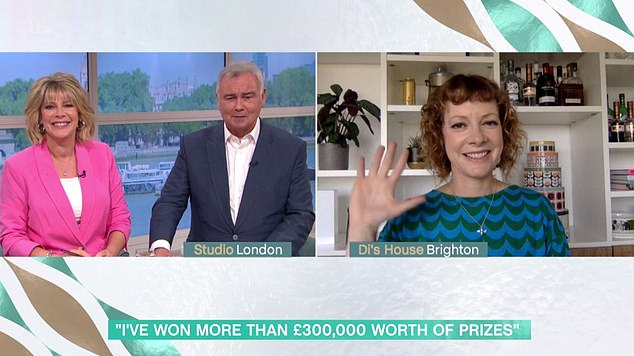 ‘And really, I just thought this is an amazing hobby -nwhat else can I win? I suppose that’s when the addiction started really.’

Presenter Eamonn Holmes went on to ask Di what the biggest prizes are that she’s won.

‘I won an amazing three-week holiday to New Zealand with £1000,’ she said. ‘It was a Lord of the Rings-themed holiday. You visited all the locations of the movie, there was also wine tasting and meals included and kayaking.

‘It was a massive adventure for me. I was in my twenties then and it was the furthest I’d travelled. It was just a dream come true really.’

Di went on to explain how she targets certain prizes and very much believes in the ‘law of attraction.’

‘I do encourage anyone to write a wish list,’ she explained. ‘Don’t just go out and think right, I’m going to enter every competition, and eventually I’ll win something. Have in your mind what you want to win. So my wish list this year- I had things like football tickets, a BBQ, a paddleboard.’ 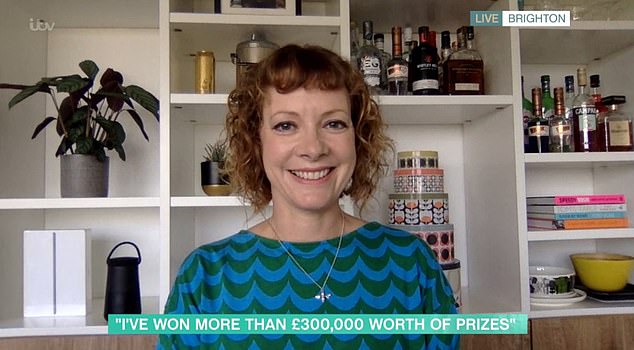 Offering her top tips, Di (pictured) said: ‘Some of the competitions, I know they’re going to get hundreds of thousands of entries, so I focus on the competitions that won’t have as many people entering

She added: ‘I did win a car back in 2002 – that was my Beetle. It was the only car I’d wanted to own so that was a dream come true. At the moment, I’d love to win an electric car. Maybe ITV might have one in their competitions soon so maybe I could give that a go?’

Offering her top tips, Di said: ‘Some of the competitions, I know they’re going to get hundreds of thousands of entries, so I focus on the competitions that won’t have as many people entering.

They won’t be as widely advertised. Anything that you need to do a photograph, or a video or write a funny little slogan or call up the radio – something that takes a bit more work – those are the types of competitions that you’re more likely to win.’

Di went on to explain that she’s not the only one that benefits from her hobby – her family reap the benefits, too.

‘It’s for all of us,’ she said. ‘We love football in this family. My husband, we’ve actually been to Milan. He got to play football with Tony Adams and Robert Pires which was a dream come true. He played in the San Siro stadium.

‘My son he actually won a video competition himself and he won a place as a mascot in the FA cup final, and was a mascot for Per Mertesacker.’

To end the segment, Ruth Langsford asked Di what competitions she was planning on entering today,

‘I’m not sure what my plans are for today,’ Di said. I’m going to get straight on Instagram and see what’s on offer. I fancy some more vegan snacks.’