Competitive vapers are competing to blow the biggest cloud

Vaping enthusiasts have moved on from blowing smoke just for fun in their home with friends and are taking it to he next level, competing in a sport called cloud chasing.

It’s a serious sport, with teams, sponsors, prizes and everything a good ol’ sporting event entails.

The concept is pretty simple: whoever can blow the biggest, coolest and most dense cloud takes the prize. Competitors stand back to back and exhale their clouds, which are measured by yardsticks or a ruler and scored by judges.

‘Cloud chasers’ in action: Competitors stand back to back and exhale smoke clouds that are then measured by a yardstick or ruler 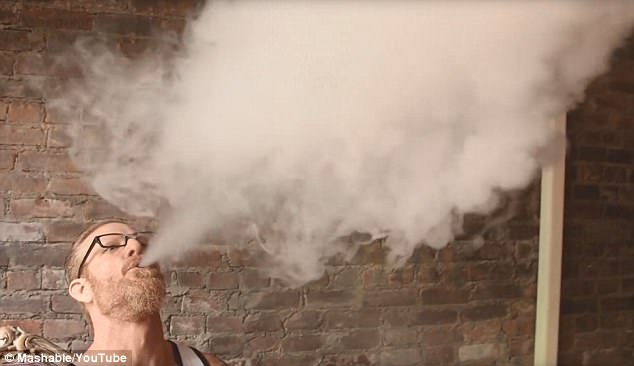 All about the density: Cloud chasing judges make their decisions based on the girth, size and density of a competitor’s smoke cloud

Judges make their decision based on a cloud’s ‘girth, length, and overall size density’.

But it’s not all about a size in this interesting sport, these ‘cloud chasers’ also get creative, and besides focusing on size and density, they blow cool shapes like streams, ripples of the popular French Inhale, which consists of exhaling the vapor out of the mouth and taking it in through the nose at the same time, forming a cloud over the upper lip.

These smoke tricks make for a good show, and a big part of the competitions are the spectators, or ‘cloud-gazers’. 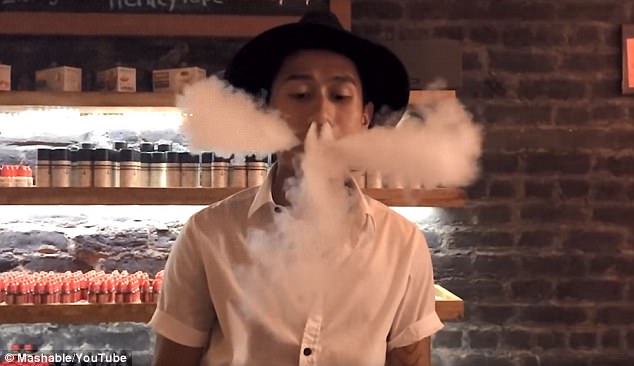 It’s not all about the size: Although size and density determines who wins, competitors also get creative and crate cool shapes with smoke 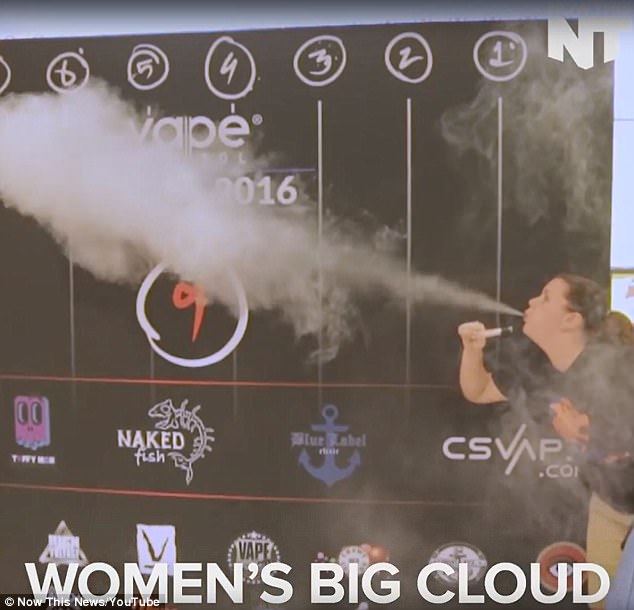 A sport with all the word entails: Competitive vaping has teams, prizes, and companies who sponsor the best ‘cloud chasers’

The sport has been traced back to the U.S. West Coast, from where it spread to Canada and all the way to Indonesia, where its very popular today.

‘It’s kind of like the X-Games, or what skateboarding was 20 years ago,’ said Talia Eisenberg, co-owner of Henley Vaporium when the sport was featured on a Mashable video.

Vape companies usually organize the competitions and sponsor the ‘cloud chasers’ with the best puffing abilities.

‘That sounds weird: professional vaper. You know what I mean? It’s just like, I just blow clouds, ya know?’ Chris replied modestly. 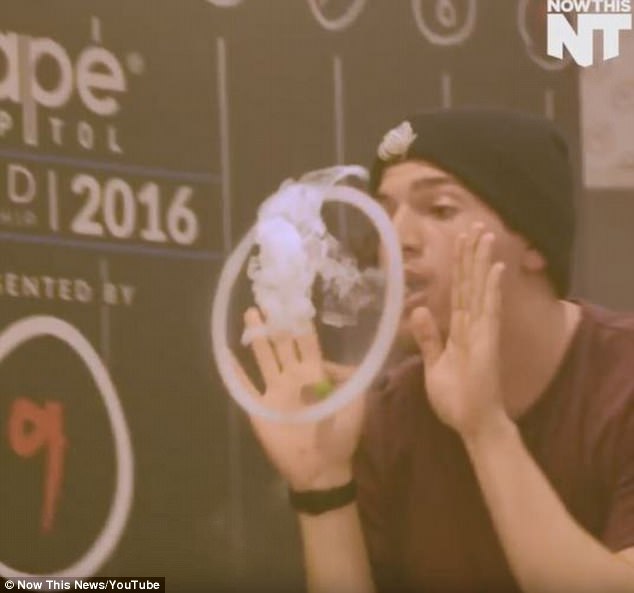 Fun to watch: Just like most sports, cloud chasing attracts spectators, called ‘cloud gazers,’ who want to watch competitors make some shapes out of smoke 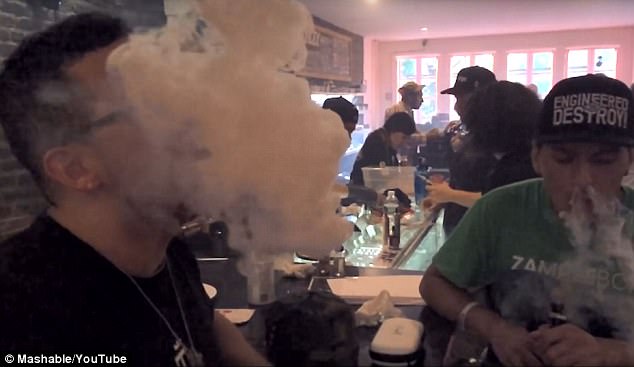 Is this the next big thing? Vaping enthusiast Talia Eisenberg said cloud chasing is ‘kind of like the X-Games, or what skateboarding was 20 years ago’

It’s not just about lung capacity, though, these vaping enthusiasts also modify their smoking devices so they’re able to perform at their best.

‘The fact that you can sort of modify these devices and then compete against one another to see who can get the biggest cloud drives innovation’, said a competitor. Talia Eisenberg, co-owner of Henley Vaporium

Things like the type of wire gauge and battery used can affect can the size and density of the cloud. 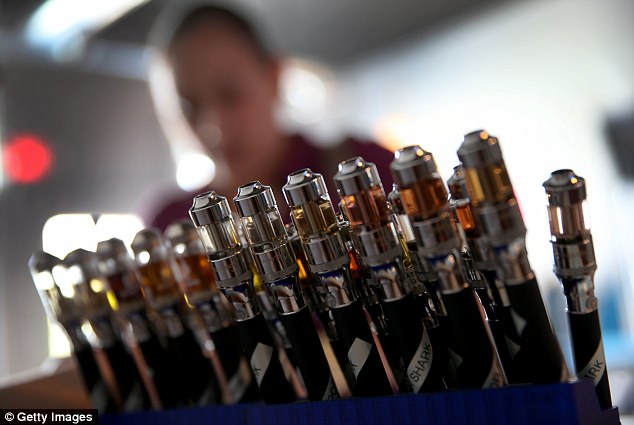 There’s a science to it: ‘Cloud chasers’ often modify their vaporizers to make them as ready as possible to blow huge, super dense smoke clouds 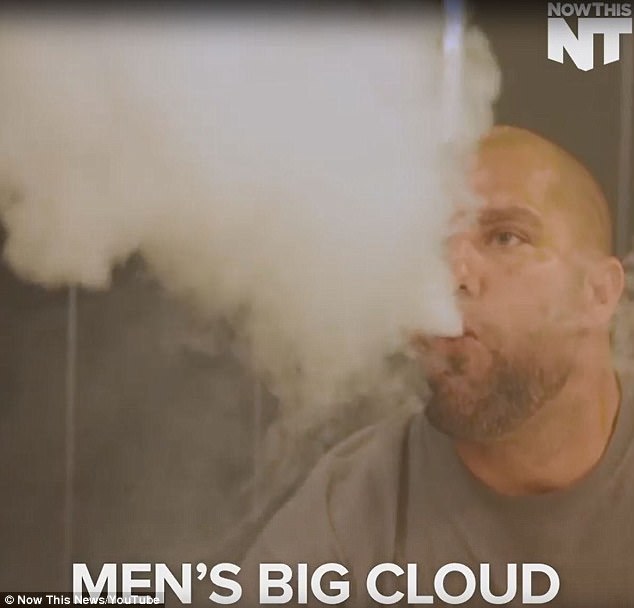 Just like Formula One? The creator of the E-Cig approves of the sport and said: ‘When automotive manufacturers first started out, they were not thinking about a sport to be called Formula One’

Competitive vapers also modify their vapes and burn other substances like vegetable glycerol and liquid nicotine that produce bigger clouds.

And even the creator of the Electronic Cigarette is into this wacky phenomenon and thinks it could one day become as big as Formula One.

‘When automotive manufacturers first started out, they were not thinking about a sport to be called Formula One. You always have groups of people who are looking for excitement,’ Hon Lik told Reuters.