Complaints of outages for Mayweather and McGregor

Floyd ‘Money’ Mayweather defeated Ultimate Fighting Championship fighter Conor McGregor in 10 rounds on Saturday in what was billed as ‘the fight of the century.’

But unfortunately for some fighting fans, they weren’t able to see the epic bout in Las Vegas go down on screen.

Malfunctions on the side of cable providers plagued the broadcast for some for most of the evening, with viewers complaining of flimsy and unstable service. 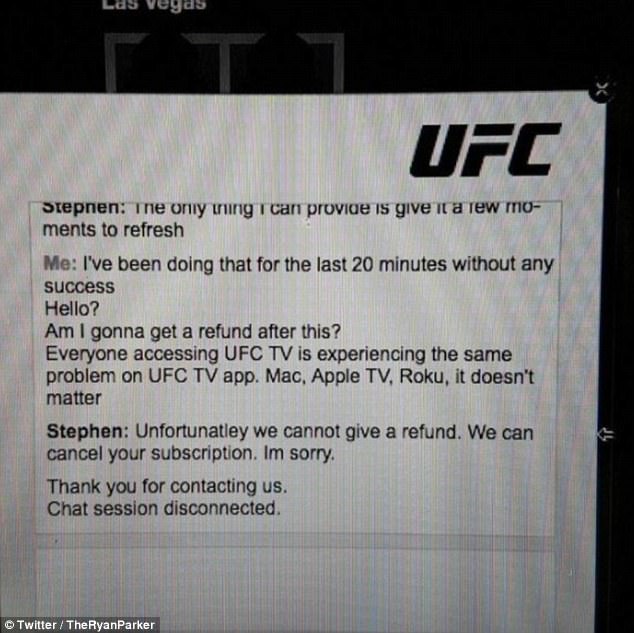 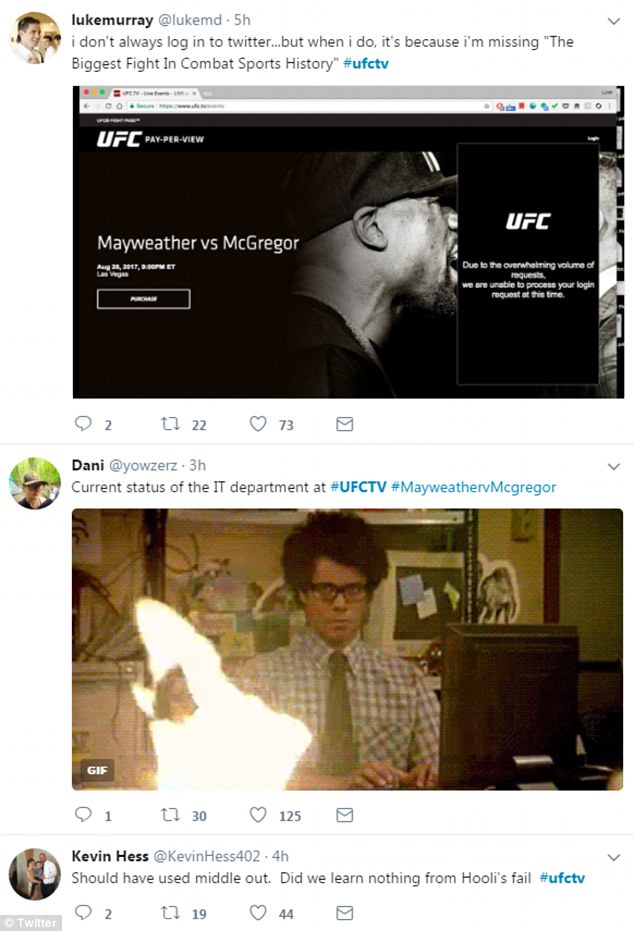 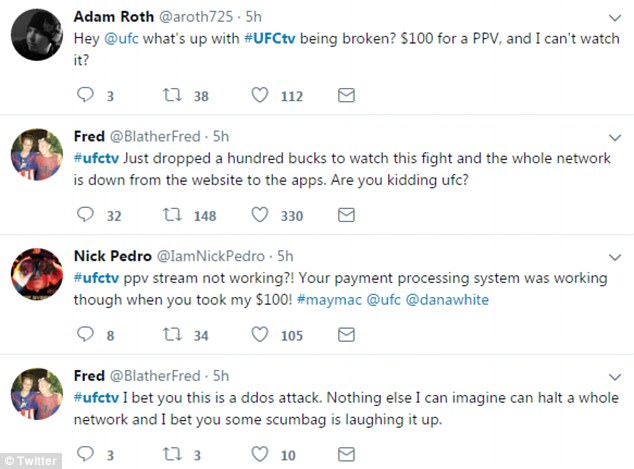 People took to Twitter to complain about the problems they were having watching the fight after paying $99.95

‘The biggest fight of this century & “the servers are overwhelmed” & pay per view is down. That’s ridiculous, & so is lack of a refund,’ San Francisco Chronicle reporter Carolyne Zinko tweeted.

Victims of the system malfunction who apparently subscribed with the UFC to watch the fight were also informed that they would not receive a refund despite the outages.

‘Am I getting a refund after this?’ one subscriber asks a customer service representative who posted his exchange on Twitter after experiencing disruptions in his service.

He adds: ‘Everyone accessing UFC TV is experiencing the same problem.’

The person communicating with the subscriber answers that ‘Unfortunately we cannot give a refund. We can cancel your subscription. I’m sorry.’ 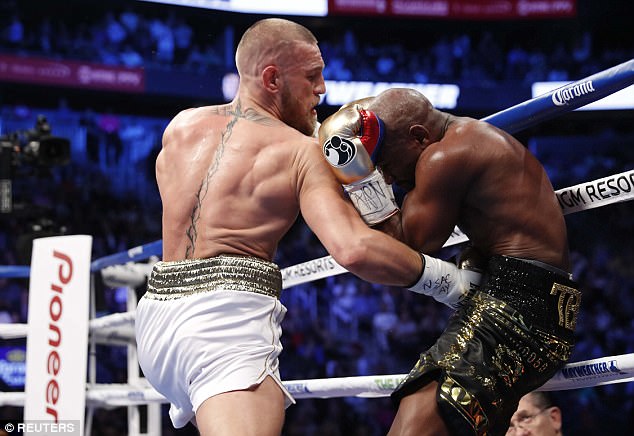 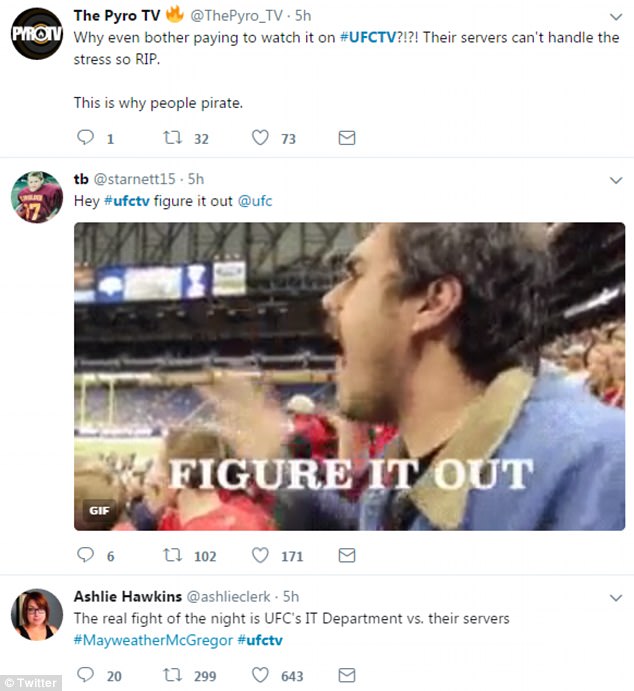 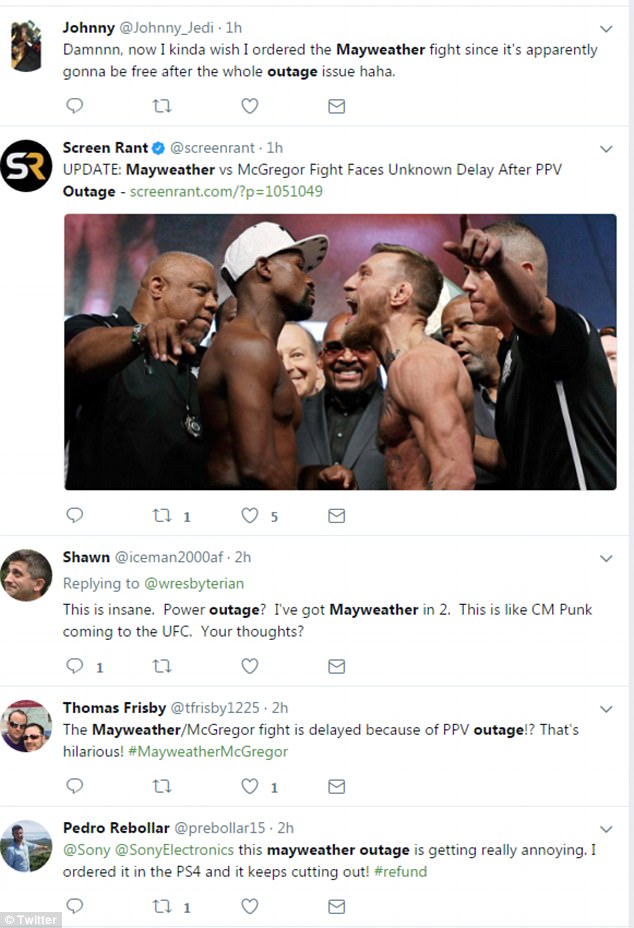 Broadcasters, who paid out $99.95 for the fight said before the bout that they were aware of the problem

Another person using the Twitter handle @wcBrown41795 also complained about disruptions in his satellite service.

‘@DIRECTVService mayweather promotions is gonna be calling asking for his money. What are y’all going to say? Our system crashed!!,’ wcbrown wrote.

‘Due to the overwhelming demand, capacity of cable systems around country are being overwhelmed,’ the UFC tweeted following the complaints, acknowledging the diffculties it was having with viewers.

A representative with the pay cable channel Showtime, who sponsored the fight, informed ESPN that it was aware of the problem before the fight.

‘They are shutting down and rebooting some of these cable systems,’ vice president Stephen Espinoza told the broadcaster.

The fight on pay-per-view was priced at a whopping $99.95 on high-definition to watch, according to USA Today.