The North Carolina Sons of Confederate Veterans raised a huge Confederate flag over Interstate 40 in Burke County to protest statues and monuments being toppled by protesters or removed across the country..

The group raised the 30×40-foot flag on to an 80-foot flag pole on the Fourth of July with help from as many as 80 volunteers.

The flag was erected on private property, meaning public officials cannot take it down.

The Sons of Confederate Veterans plan to erect several more flags around the state to remember history as well as their ancestry, the group said. 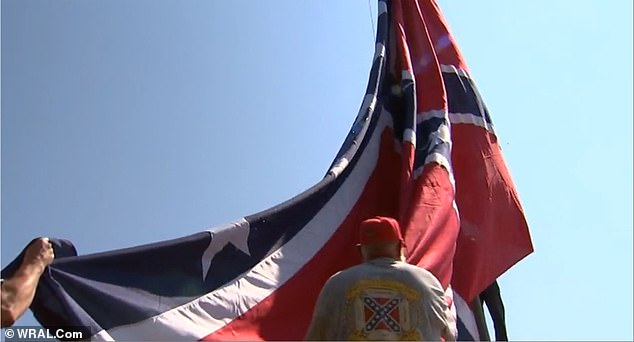 The flag was erected on private property, and in the absence of local ordinances that would require its removal, cannot be touched by public officials. Volunteers are pictured raising the flag above Interstate 40 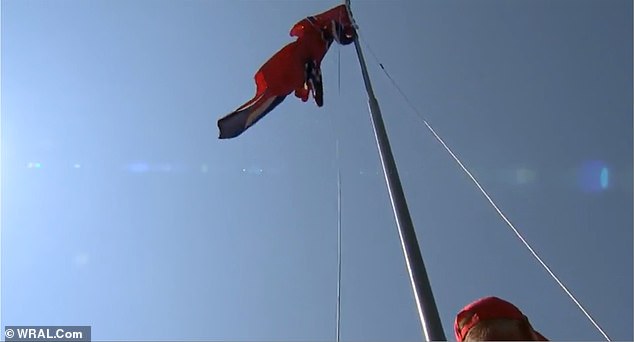 The flag is pictured just reaching the top of its flag pole. The Sons of Confederate Veterans plans to erect several more flags around the state to remember history as well as their ancestry, the group said 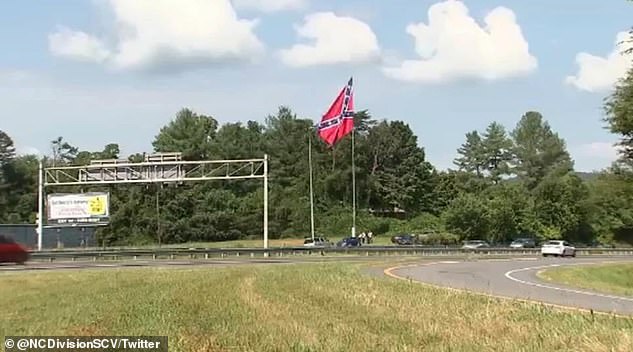 ‘Take down our statues and were going to put up a flag somewhere along the major intestates of North Carolina,’ said Elgie McGalliard, one of the group’s members WRAL reports.

The group’s efforts come as statues and monuments tied to the Confederacy have been toppled by demonstrators and in other cases removed by public officials after protests erupted across the country in response to Floyd’s police-related slaying.

Floyd, a 46-year-old Black father-of-five, died after white police officer Derek Chauvin pressed his knee on the man’s neck for almost nine minutes during an arrest on Memorial Day.

Video footage of the incident taken by a bystander shows the slaying, which triggered Black Lives Matter protests calling for an end to police brutality and systematic racism.

The movement has also called for the removal of racist symbols, including statues, monuments and the Confederate flag.

In response — and just two days before the July 4th holiday — Mississippi retired its state flag, which had included the Confederate flag in its design. The state flag was removed to a museum after Republican Governor Tate Reeves signed a law stripping its official status.

NASCAR in June responded by banning further use of the Confederate flag, once commonly seen at all its events.

Black NASCAR driver Bubba Wallace is credited with pushing for the change at the racing association after he drove his car with Black Lives Matter paint scheme.

Among those who disagreed with NASCAR’s move were protesters who flew a Confederate flag from a plane over Talladega Speedway. 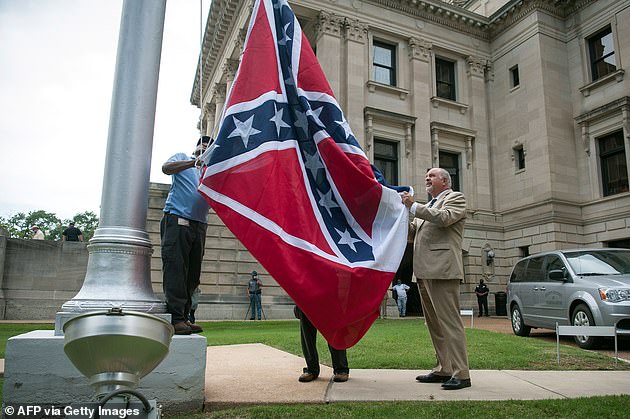 Mississippi retired its state flag, which had included the Confederate flag in its design on July 2. The state flag was removed to a museum after Republican Governor Tate Reeves signed a law stripping its official status

The flag raised in Burke County by the Sons of Confederate Veterans, which cost $800, drew protests from the mayor in the nearby town of Hildebran.

‘I’ve had numerous contacts from people saying that they wouldn’t do business in town because of that flag,’ said Mayor Wendell Hildebrand.

Captain C.F. Connor Camp partnered with the Sons of Confederate Veterans in raising the large flag, the Hickory Daily Record reports. It replaced a smaller flag which had been damaged.

Catawba County NAACP President Jerry McCombs said the Sons of Confederate Veterans wee within their right to raise the flag.

“But if I had relatives in that war, and knowing that the war was about slavery, I would thank the people who fought, but would not support it,” he told the Daily Record.