Police have been condemned for pulling down an Aboriginal boy’s pants and forcing him to squat naked without his parents present in a little-noticed report to the NSW Parliament just last month.

The Law Enforcement Conduct Commission slammed NSW Police over the incident in the state’s north-west in a scathing report that was overshadowed by separate reports into strip-searches conducted on teenagers at music festivals.

The police watchdog found an officer had placed his fingers in the waistband of the 16-year-old’s shorts on the main street of the town and looked at his backside, searching for drugs, and later stripped him in the police station’s loading dock.

But under the law the sergeant – who had 17 years’ experience – isn’t allowed to strip the boy without being in a private space, at a police station, with his parents or guardian present.

The watchdog said the child even told the officer: ‘What are you doin’, you can’t put your hands down my bum…you can search me down at the station when my parents are there.’

The sergeant replied: ‘Well, you actually don’t know the rules, we can search you.’ 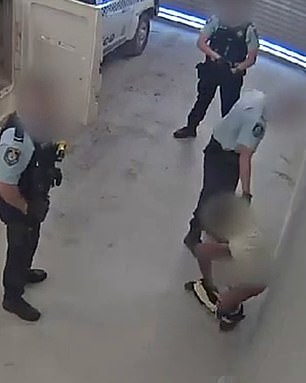 CCTV footage shows the moment the boy was taken back to the police station, has his pants removed and is forced to squat as police search for the drugs – which were in the back of the police truck

But, in a ruling that slammed the ‘ignorance of or disregard for’ the law by the officers’ involved, the commission said the sergeant ‘would later concede it was he who did not know the rules and that (the teenager’s) understanding was correct’.

The cops were searching the teen for two grams of cannabis which the boy had in his possession, wrapped in a piece of foil.

The boy told the police: ”You can’t look down my pants c**t’.

The sergeant replied: ‘Well we can when you put something down there, can’t we?’

After the boy’s protests, another officer told the teen they would take him back to the police station to ‘get his gear off’, and he was handcuffed and put in the back of a caged truck.

When they got to the loading dock, confronting CCTV footage shows the sergeant pulling the draw string of the handcuffed boy’s shorts, taking them off and forced him to squat against the wall.

While this was happening, the boy claimed he asked the officers ‘don’t you need a parent’ – which they did – but the officers insisted they did not and continued.

What are you doin’, you can’t put your hands down my bum…you can search me down at the station when my parents are there

What the Indigenous teenager told police

The sergeant, who had 17 years’ experience in the Force, later admitted he ‘certainly strip searched (the boy) without a parent present.’

He later learned from the watchdog that police don’t actually have the power to remove a person’s clothing, and must ask for a person’s cooperation.

The commission found the officers could have searched the boy privately in a special room of the station with his parents present.

They also would have found the incriminating piece of foil in the back of the truck, making the whole exercise redundant.

The sergeant admitted to the commission that the boy had a ‘tiny, tiny amount’ of cannabis on him – just two grams.

He was charged with possession and later fined.

The watchdog ruled there was an ‘absence of effective training of these officers, leading to ineffective practice in policing’.

Because of that ‘these obvious failures of performance’ did not lead to findings of serious misconduct against the officers,’ the commissioners ruled.

‘The current manner in which police are trained in their powers and responsibilities should be seriously reconsidered,’ the commission said.

In recent months the commission’s reports on police strip-searching young people have sparked uproar and calls for officers to be better educated about their powers.

A NSW Police spokeswoman said the agency is awaiting the findings of the commission’s final report on police strip searches due later this year.

A University of New South Wales study found Indigenous people are ‘disproportionately’ affected by the searches.

Daily Mail Australia had sought an update in the wake of controversy where a police officer knocked over a 17-year-old Indigenous boy this week. 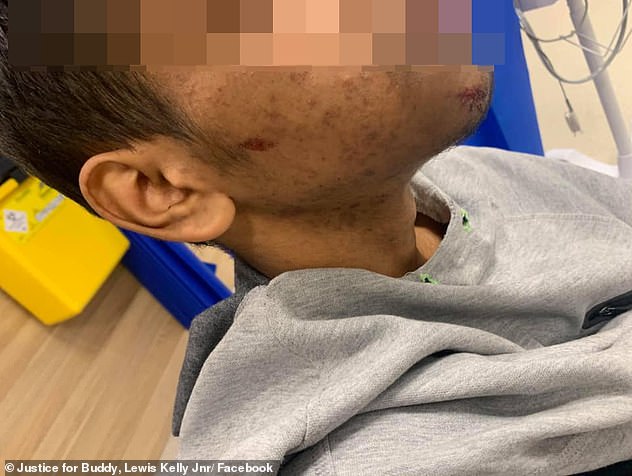 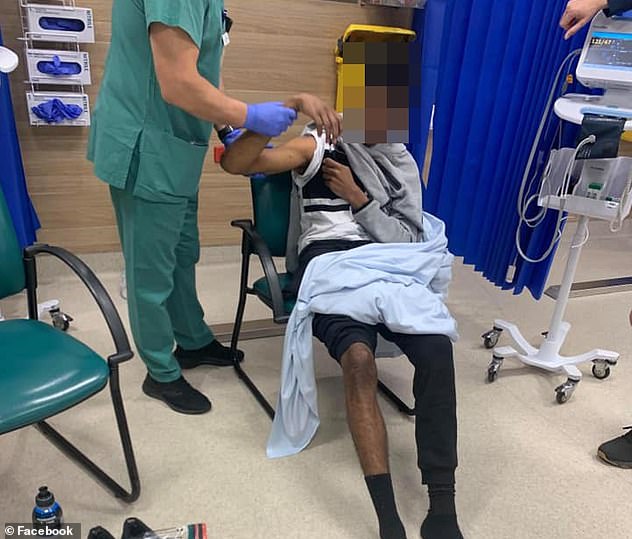 The boy told an officer he would ‘crack you in the jaw bro’, then had his hands held and his legs kicked from under him, flopping him onto the ground and chipping his teeth.

The video went viral in the wake of the death of African-American George Floyd – sparking urgent local police attempts to hose down the controversy in the wake of scenes in the United States.

The police commissioner, Mick Fuller, apologised to the boy on Radio 2GB and said the officer was ‘having a bad day’.

But 2GB host Ray Hadley said he supported the officer’s actions and suggested ‘the PC brigade’ had taken hold of Mr Fuller.

‘Police don’t get any respect,’ the presenter said.

‘It’s not about indigenous people, or white people, or people from any other ethnic background, it’s about a lack of respect for the authority of police.’

That officer has been placed on restricted duties.

Police under fire for strip-searching children without their parents

Much of the focus on police strip searching children and teenagers has been on attendees searched while attending music festivals.

A 16-year-old girl told the Law Enforcement Conduct Commissions she felt ‘completely humiliated’ when she was undressed and told to squat at Splendour in the Grass in 2018.

A 15-year-old boy at a festival in Homebush last year told the watchdog he was told by an officer: ‘Hold your d**k and lift your balls up and show me your gooch.’

The watchdog found all those searches were unlawful, as well as the case explained above.

But a University of New South Wales study, commissioned by the Redfern Legal Centre, found recently that Indigenous and Torres Strait Islanders faced a ‘disproportionate’ number of strip searches.