The last of the clappers have taken to the streets, continuing to pay tribute to key workers a week after the final clap for carers officially ended.

Taking to their doorsteps tonight, some said that they felt that last week’s ‘official’ end to the tribute came too soon as carers continue to battle the virus on the frontline.

While others who stepped out to applaud for the eleventh week claimed they just ‘didn’t get the memo’ that the last hurrah was set to be last Thursday.

The event saw widespread weekly support after beginning at 8pm on March 25, however organiser Annemarie Plas, 36, a Dutch national living in south London, called for last Thursday’s event to be the last as ‘it is good to stop it at its peak’.

A family outside the Chelsea and Westminster Hospital, south west London, join in applause during a Clap for Carers to recognise and support NHS workers. Thursday June 4, 2020

Ms Plas said: ‘Without getting too political, I share some of the opinions that some people have about it becoming politicised. I think the narrative is starting to change and I don’t want the clap to be negative.’

Tonight a mixture of perseverance and confusion saw a limited number of people continue the tribute.

Louise Buttery said she and her household still did the clap, tweeting: ‘Well we still did!!! The virus hasn’t gone, the NHS are still working their a**** off, care home staff are still caring and we are still grateful for everything.’

While Keith Derham shared that simply just did not realise he would be the only one clapping, tweeting: ‘Yeah, I was the only one out on my street before realising last week was the final one. #clapforcarers’. 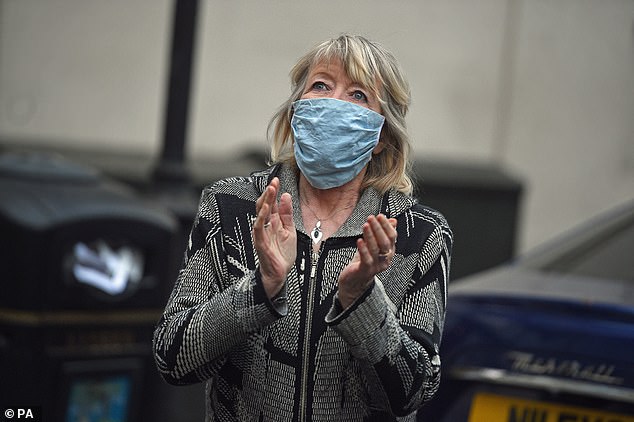 A woman outside the Chelsea and Westminster Hospital, London, joins in applause during a Clap for Carers to recognise and support NHS workers and carers fighting the coronavirus pandemic. Thursday June 4 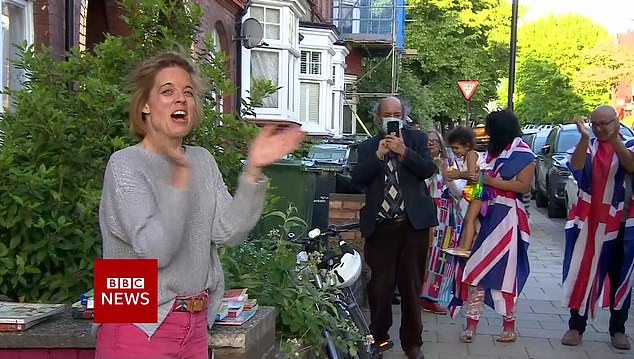 Annemarie Plas, the founder of the Clap for Carers event, joins members of the public for Thursday’s applause, which was the tenth weekly clap and intended to be the last

Louise Buttery said she and her household still did the clap as ‘the virus hasn’t gone, the NHS are still working’

One woman saw the funny side of her neighbour’s perseverance at continuing to set up a sound system to sing on Thursday night in torrential rain.

She tweeted: ‘I can’t believe the neighbour that sets up her sound system to sing every Thursday night after the clap for carers is at it again tonight. Never let the torrential rain and the fact the clap is over stop your attempt at going viral. That’s true graft right there.’

While Gordon McIntosh warned that by stopping clap for carers some would be missing out on a ‘social connection which they may not have through the rest of the week’ during challenging periods of isolation.

Student Emily Powell tweeted: ‘Am I the only one who didn’t realise #clapforcarers was over? I definitely missed that memo. Where do people get their info from?!’

The clap became a point of contention after Doctors and other key medical workers said they felt the event had become politicised. 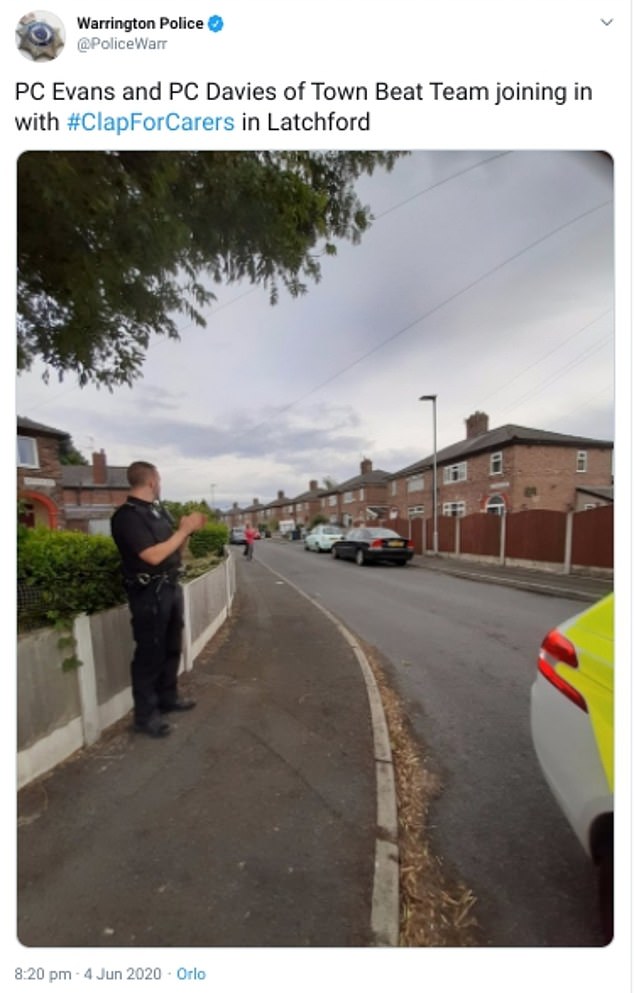 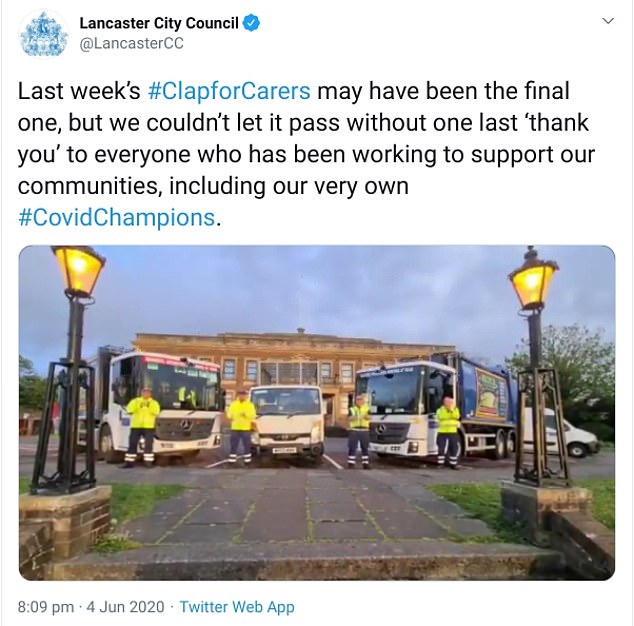 ‘But instead of clapping tonight at 8pm, I’ll observe silence in remembrance of my 237 colleagues who have died during the pandemic.’

Dr Viz, 27, who has worked on the front line during the coronavirus pandemic, said she supported ending the event last week amid concerns it has become too political.

She said the weekly applause had started from everybody showing gratitude for the NHS, showing their love for ‘this amazing healthcare system’.

‘But it went from that to being a stunt that the politicians chose to do,’ she added. 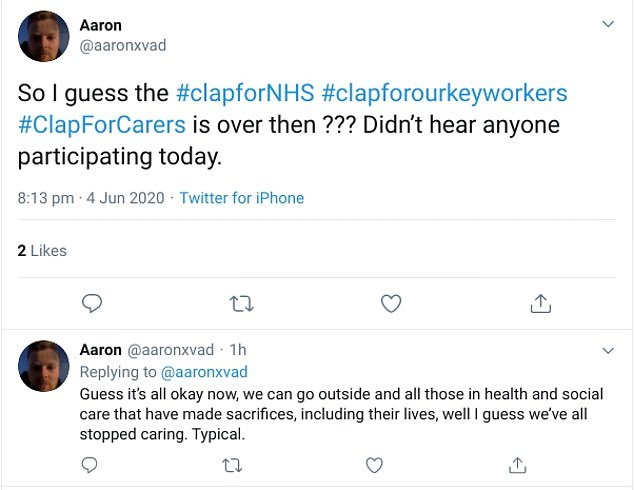 Others appeared to be upset by the lack of participation, tweeting ‘I guess we’ve all stopped caring. Typical’

Tracey Douglas questioned why the clap for carers had stopped as ‘they haven’t stopped caring for  us!’ 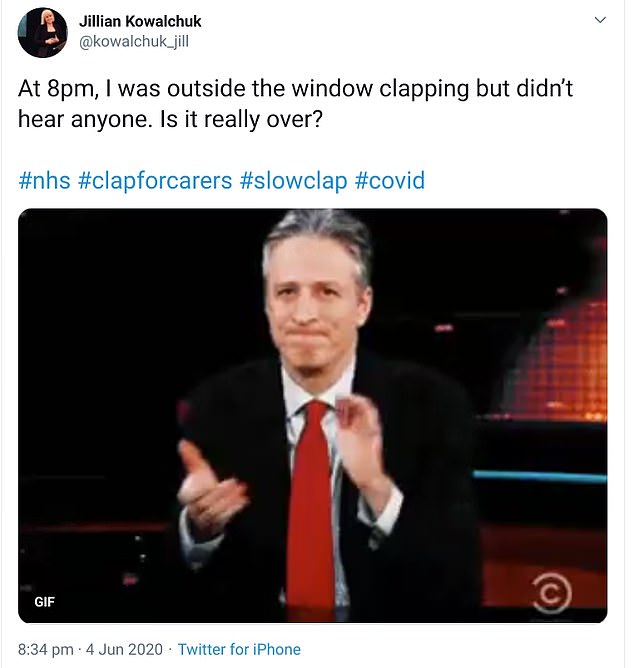 In Falkirk, Scotland, a young bagpiper continued to pay his tributes with a song at 8pm tonight 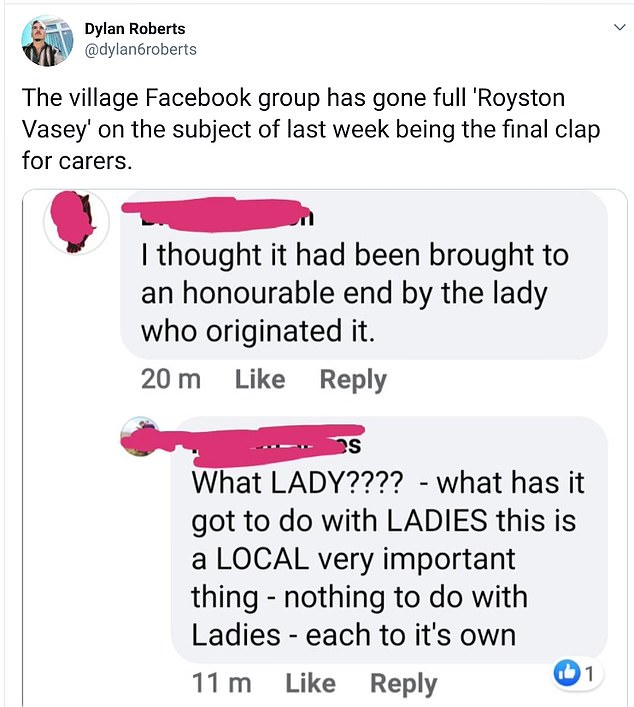 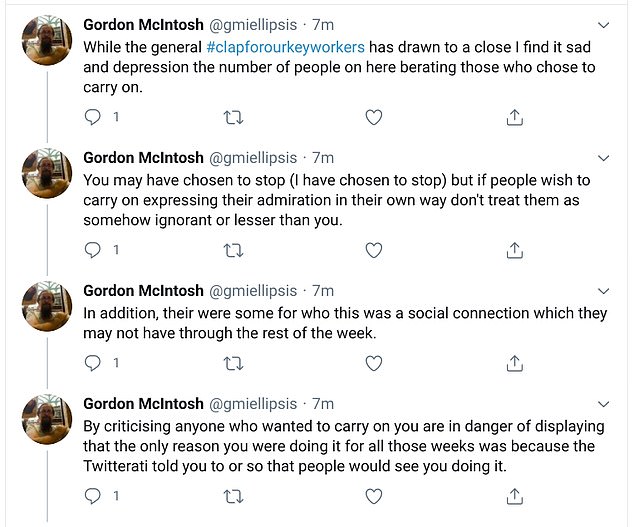 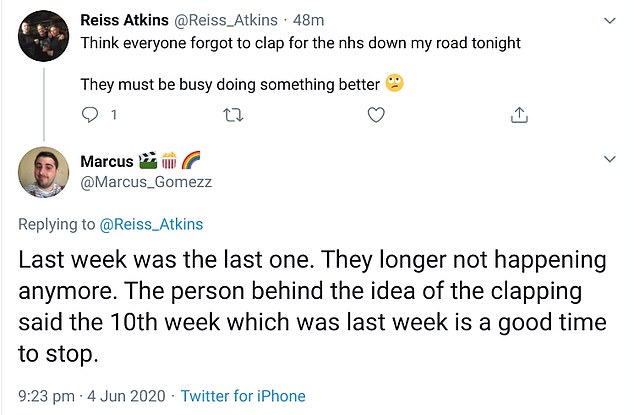