Five Connecticut police officers have been cleared in the fatal shooting of YouTube rapper ‘Gangstalicious’ in December 2017.

The investigation results into the death of 20-year-old rapper Zoe Dowdell — aka Gangstalicious — were released by Fairfield State’s Attorney John Smriga Thursday.

The report said the five police officers from New Britain, Connecticut, were justified in using deadly force when they fatally shot Dowdell while investigating a series of carjackings and robberies, according to WTNH.

Authorities said Dowdell and the two teens were suspected in a string of violent armed carjackings and attempted carjackings in New Britain in the period leading up to the fatal shooting.

Dowdell was said to have been inside a car with two teens when the police officers attempted to pull the car over on the evening of December 14, 2017.

In dashboard camera surveillance videos, a car containing Dowdell and the teens can be seen backing up onto the sidewalk, crashing into what appears to be unmarked police cars and then driving directly at police officers who then open fire on the car.

The 13-month investigation revealed that police fired 28 rounds at the car.

The autopsy report stated that Dowdell was shot four times: once in the back of the head, through his neck and in each of his legs. He was declared dead at the hospital that night, according to the New Britain Herald. 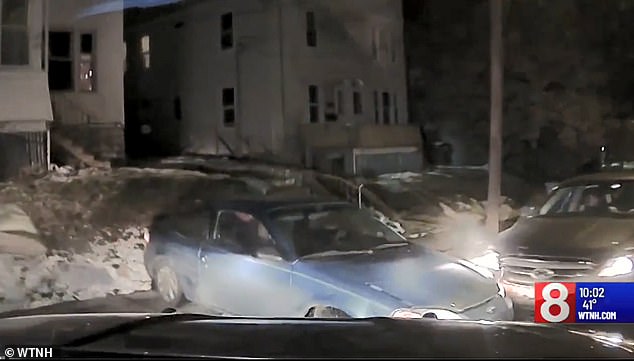 Dowdell and two teens were inside a car that police were trying to stop while investigating a series of carjackings. Dowdell’s car can be seen here backing up onto the sidewalk 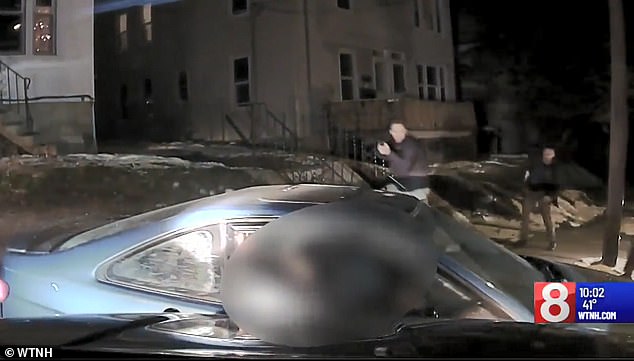 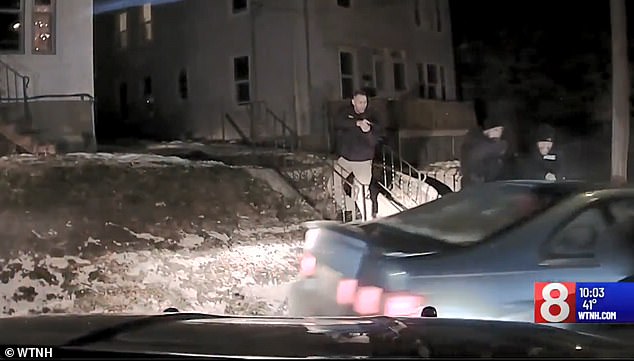 Dowdell’s car then purposely drives in the direction of other officers who are trying to stop the car. The investigation revealed 28 shots were fired into the car, four of which killed Dowdell

The other two teens were also wounded, but survived their injuries and were charged with robbery.

Authorities said that two guns were found inside the car, although there didn’t appear to be any evidence that the guns were used during the shooting.

Two of the officers involved in the shooting were said to have been justified because it was possible that they feared for their lives as the suspect’s car drove towards them.

The other three officers were cleared because they believed that they were shooting at the car in an effort to stop the suspects from fleeing and to protect public safety.

All five officers involved in the shooting were placed on restricted duty for the past year.

Dowdell’s mother, Sherene Fagon, had filed a $6.5million wrongful death lawsuit against the city of New Britain in September 2018, but it was put on hold by a judge until the shooting investigation was complete.

It is not yet clear whether Fagon will press on with the lawsuit.

An internal affairs investigation into the incident is expected to get underway following the release of the Fairfield State’s Attorney’s report.