Connecticut mother lives with her ex-husband, new partner and kids

A Connecticut mother-of-four who shares a home with her ex-husband and her new husband has opened up about life in her ‘very modern family’.

Lindsay Taylor, 33, split from her husband of six years Chris Kelley in 2016, not long after the pair welcomed their daughter Joanna, now three.

She then fell in love with her current husband Mike Taylor, a parent to two children of his own.

Unexpectedly, Lindsay and Mike have maintained an unusually close friendship with Chris, the father of Joanna and her five-year-old son Lucas, who suffers from a rare autoimmune disease.

The trio currently shares a five-bedroom home in Putnam, Connecticut, with their six children: Lucas and Joanna, Lindsay’s 17-year-old daughter from a previous marriage, Rachel, Mike’s two children Danny, 19, and Destiny, 21, and his and Lindsay’s 10-month-old Harrison.

Connecticut mother-of-four Lindsay Taylor, 33, has opened up about what it’s like to share a home with her current husband Mike Taylor as well as her ex-husband Chris Kelley, right 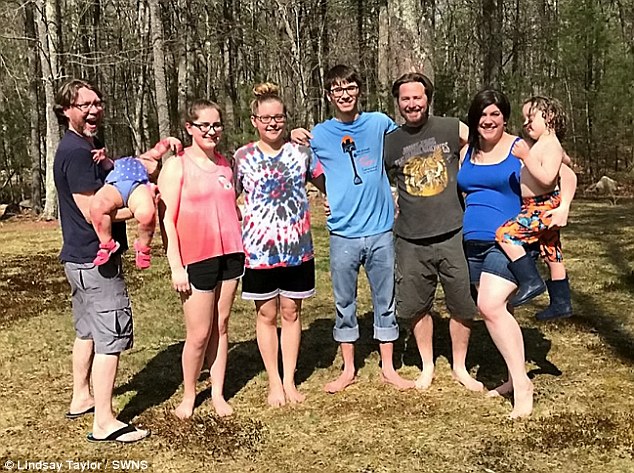 Lindsay says she is part of a ‘very modern family’, which is pictured above. From the left: Ex-husband Chris, the couple’s daughter Joanna, three, Lindsay’s 17-year-old daughter Rachel, Mike’s children Destiny and Danny, Mike, Lindsay and the divorced couple’s son Lucas, five 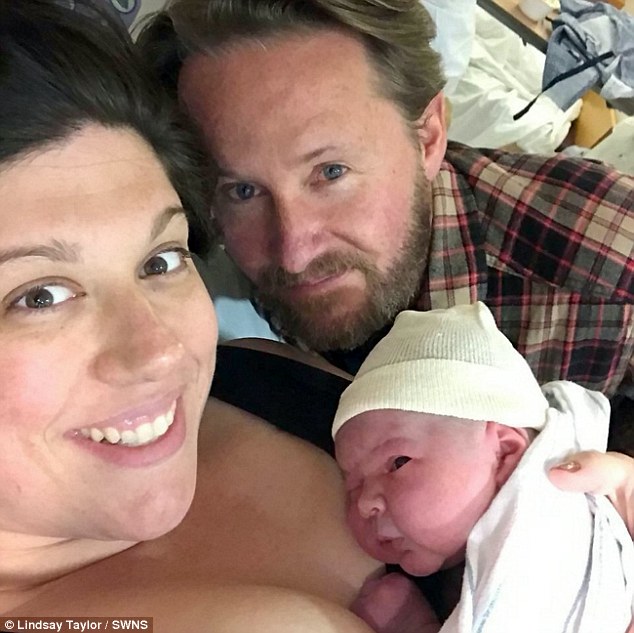 Lindsay and Mike in 2016 while she was in the middle of marital troubles with Chris. The Taylors welcomed son Harrison last year (pictured)

Lindsay revealed that her marriage to Chris began to crumble toward the end of her pregnancy with Joanna in the spring of 2015.

‘I couldn’t help thinking to myself: “I’m just not excited anymore, I’m just living with my best friend.” ‘There was no fire or chemistry,’ she said.

‘I’m a very honest person and I knew that there was no amount of counselling that was going to make me change my mind.

‘That’s when I met Mike. In August 2016 at a show for a mutual friend’s band, he walked towards me and I couldn’t help but check him out.

‘But I was still married to Chris, so we left it at “hello”.

‘That was the push I needed to file the divorce papers.’ 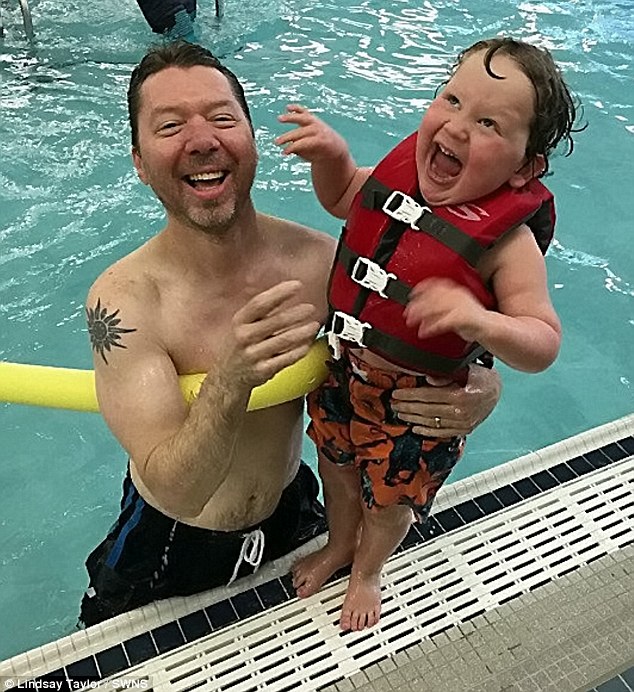 Chris is pictured with his and Lindsay’s son Lucas, five, who has an autoimmune disease 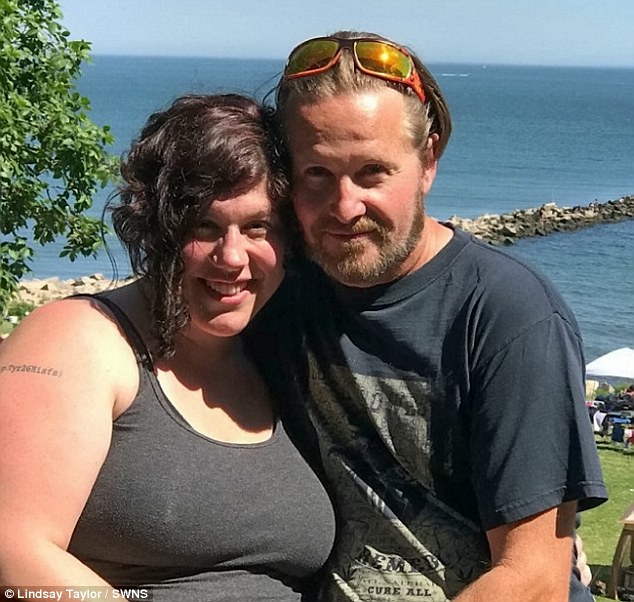 Lindsay and Mike, pictured, moved in with Chris after being evicted from their home last year 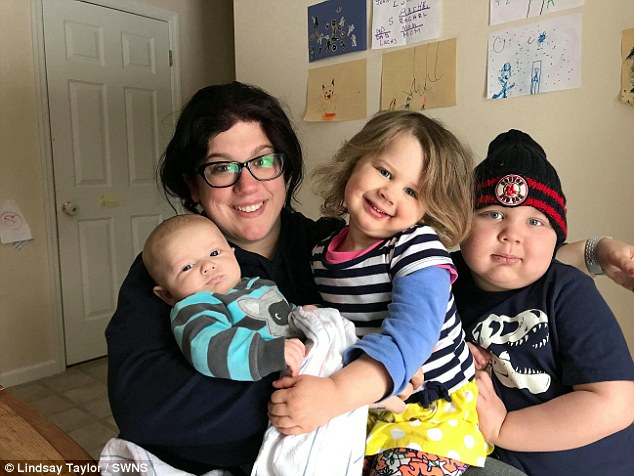 After separating from Chris, Lindsay briefly lived with her mother before moving in with Mike.

The couple were then evicted from their apartment, at which point Chris made an unexpected offer.

According to Lindsay, the 46-year-old father said: ‘Why don’t you both move in with me? We can pay one mortgage, one set of bills and keep all the kids together?

‘When Chris first suggested it I was like: “Are you serious?”

‘If I was him, I wouldn’t have offered that. But I think at that point he knew me and him were romantically over, and it was just about what was best for the kids.

‘Chris is very open minded, so for him, this wasn’t a big deal at all – it just made sense.

‘We were willing to do anything to keep the flow of our family going.’ 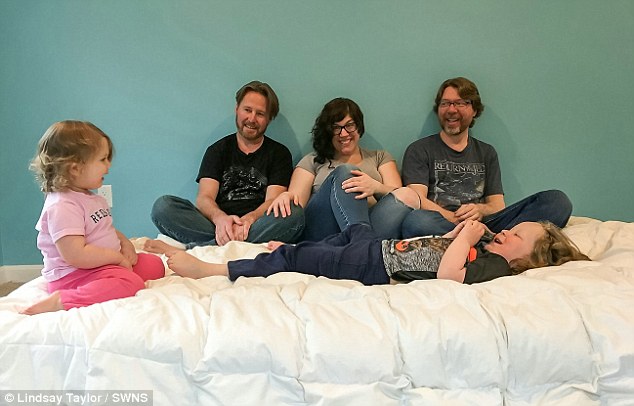 Living in the five-bedroom home together has helped the family come together, Lindsay said 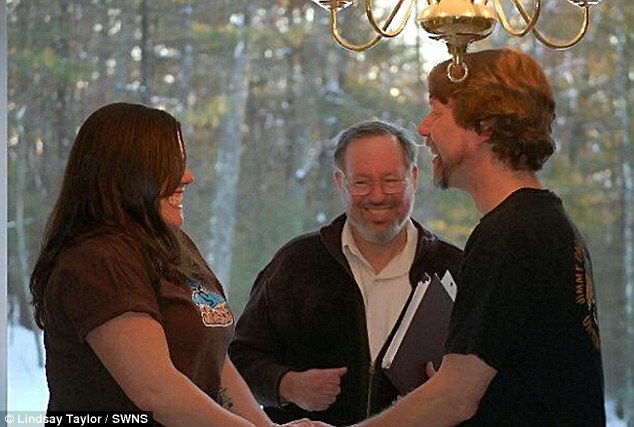 Lindsay and Chris are pictured during their wedding in January 2011. They divorced in 2016

Lindsay admitted the arrangement started off a little rocky for her new partner.

‘Mike found it quite hard. He’s more classic and not as “go with the flow,”‘ Lindsay explained.

‘It took him a while to be comfortable in our blended home.’

However, the two men quickly struck up a friendship and helped each other out with painting and decorating the home.

Mike had jokingly told Chris: ‘I took your wife, the least I could do was paint your kitchen.’

Two months after the families moved in together, Mike and Lindsay got married in a beach wedding last summer.

She was pregnant with baby Harrison at the time.

Lucas is a complex kid that needs a village around him and this is what we’re doing.

After the surgery the family’s home provided the semi-sterile environment he needed to recover.

‘Lucas is a complex kid that needs a village around him and this is what we’re doing,’ Lindsay said.

‘It might seem a bit strange that I live with both my ex-husband and my husband, but it’s what we need to do to get through this as a family.

‘Lucas’ immune system is so fragile right now that we need to limit his exposure to the outside world, and this means as a family we need to do this as well.

‘We can go to the store and little things like that but we avoid large gatherings and restaurants where we can easily pick up infections and pass them on to Lucas.

‘It’s a big sacrifice that everyone is making but hopefully it will all be for the best when Lucas gets better.’ 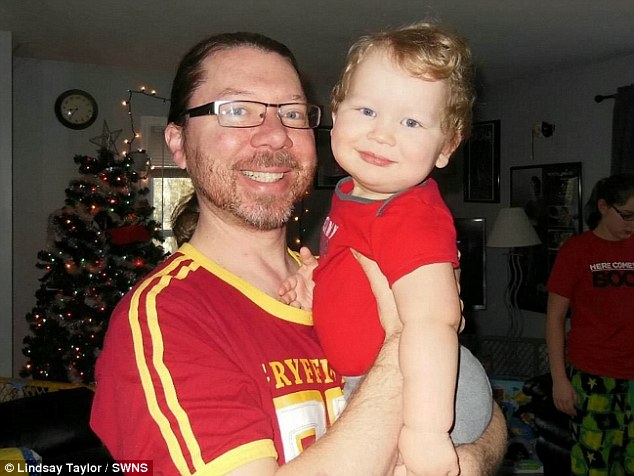 Chris is pictured with his son Lucas, who was diagnosed with chronic granulomatous disease Dad duo Mike, left, and Chris, right, are pictured with their sons Harrison and Lucas

Sharing a home has allowed the families to blend over the past year, Lindsay said.

To keep things running smoothly on a day-to-day basis, Chris does the grocery shopping, Mike and Lindsay do the cooking and the older children help out with chores and babysitting.

‘Everything we’ve done has been for the kids and if there’s one thing I’ve learnt, it’s that anything, no matter how ridiculous it may sound, is possible, if you try hard enough to make it work,’ she said.

Explaining the arrangement to others is often a challenge, though.

‘Some people have asked if I sleep with both of them, so I have to not get offended because I guess it’s a natural question,’ Lindsay said.

‘But the answer is no. It still works, it just takes some explaining.

‘I finally just have to say, listen, Chris is my best friend, and we have children, and he was nice enough to let me and Mike live with him. Nobody fights, so it works.’

Lindsay added that she and Mike are planning to get their own place in Hawaii because the Connecticut home can often feel too crowded.

‘Sometimes I wish there was just a room to go to be alone when we’re all packed in together,’ she said.

‘We have a big house, but it’s still not big enough.’

She also revealed that her ex-husband has been on the lookout for a new addition.

Lindsay said: ‘If there was a new woman in his life she would have to be happy with our blended family and blend in too.

‘I’m sure we’ll all welcome her with open arms, it’ll just be another dynamic.’