Conor McGregor and his fiancee Dee Devlin looked relaxed as they posed for pictures in a doctor’s waiting room today, days after the MMA star was accused of exposing himself to a woman in France.

The Irish UFC fighter took a series of playful pictures in a mirror and posted them on Instagram as the couple waited in a doctor’s office in Italy on Friday, under a sign advertising the services of an ear specialist.

The family has been sailing in the Mediterranean on McGregor’s £3million yacht The Devocean as he waits to hear whether French prosecutors will press charges.

The 32-year-old was released without charge last week but could face further action over allegations that he ‘exhibited his private parts’ to a young married woman in a bar on the French island of Corsica. 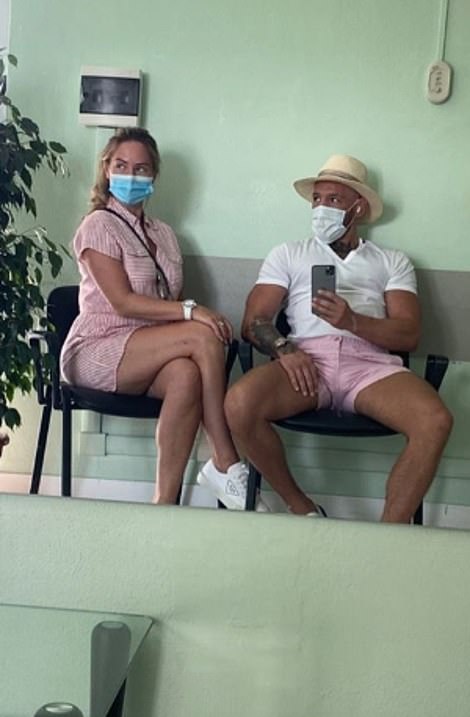 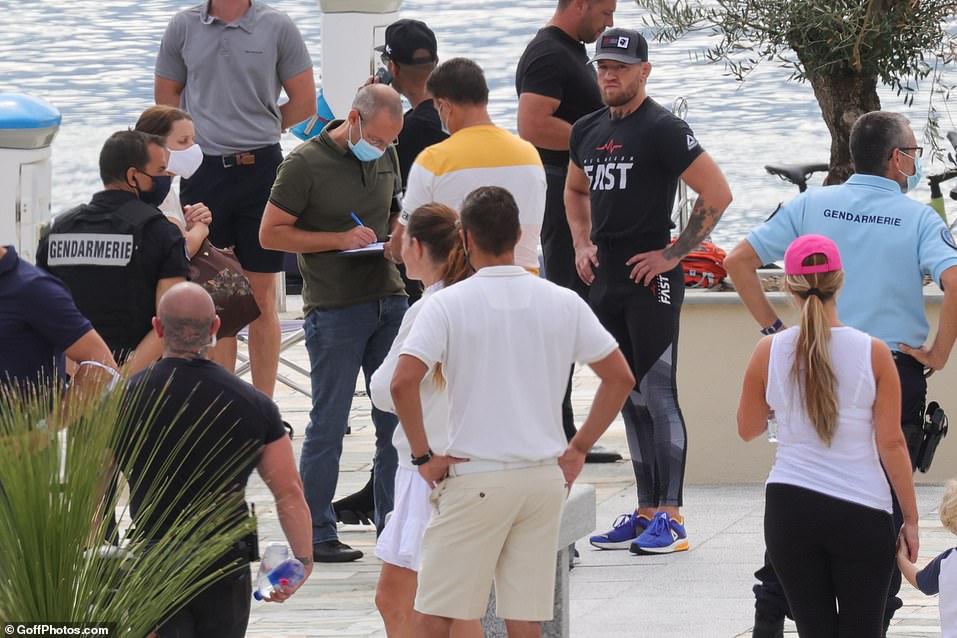 Since his arrest, McGregor has posted pictures of his family splashing in the Mediterranean including his mother Margaret and sister Aoife.

He went to the doctor’s office today with his fiancee Dee, weeks after the couple announced their engagement on August 8 after being in a relationship for 12 years.

It is not known why the pair were seeking medical attention, but they wore masks while sitting in the waiting room as McGregor took pictures with his phone.

In the last week, McGregor has also raged at ‘vicious lies’ in a now-deleted Facebook post in which he hinted that DNA and CCTV footage could clear his name.

‘The truth is power! I am free! ‘Never will a dime be paid to anyone coming at me with vicious lies! Not now not f****** ever!

‘I will fight! And I am only beginning my fight!

‘I will not allow these people to just accuse me and then disappear into the dark to attempt to ruin someone else’s life! No f****** way!’ 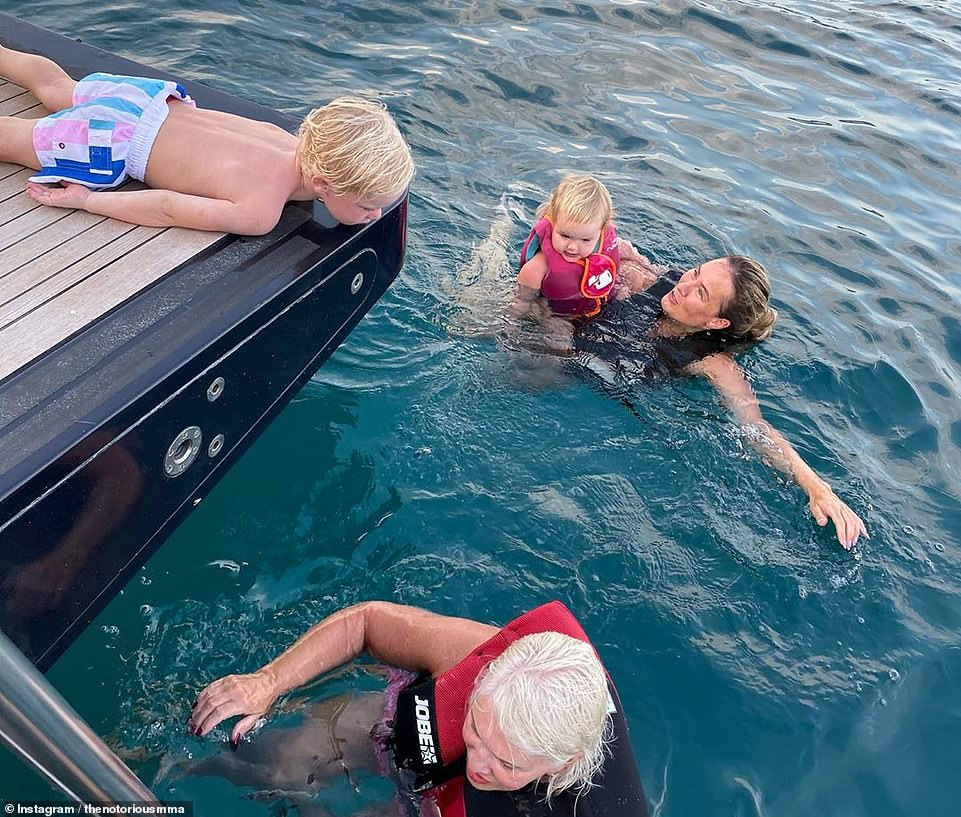 The retired MMA fighter has used his Instagram account to show his fiancée, sister and mother splashing around in the sea off the rear of his £3million yacht The Devocean 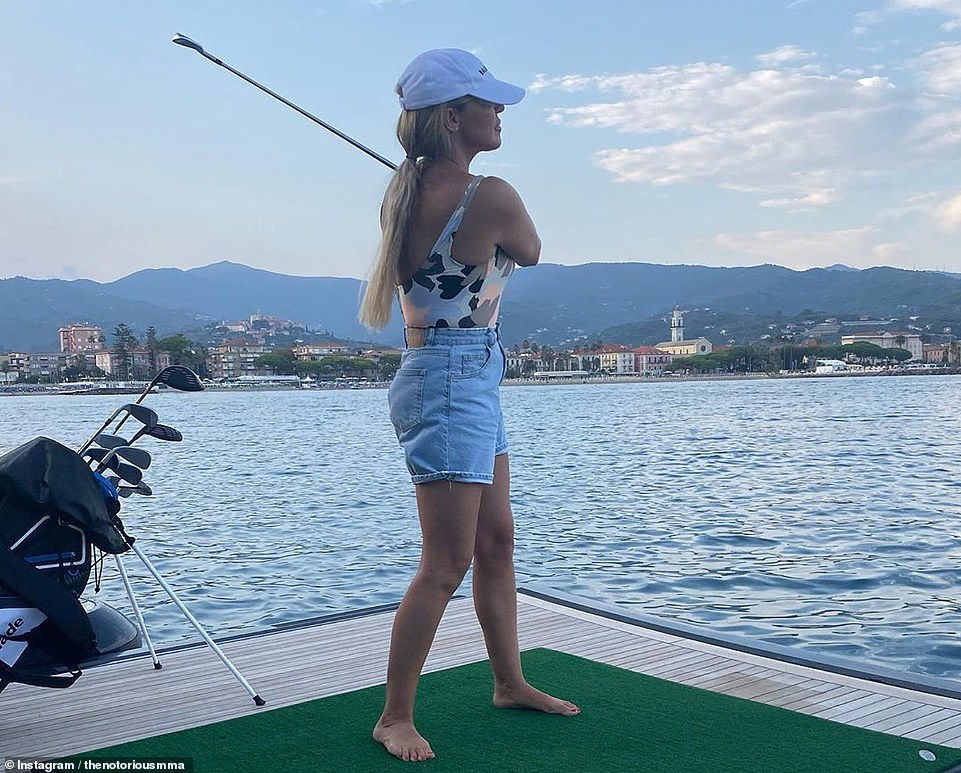 McGregor was released without charge after his arrest, but the criminal case is still active and he could be summoned before a magistrate.

The UFC fighter was waiting for the results of ‘key physical tests’ and ‘the examination of film evidence’ before learning whether he will be re-arrested.

A prosecuting source on Corsica confirmed to MailOnline on Tuesday that McGregor was ‘free to travel while enquiries continue.’

He said test results were ‘still being analysed’ and evidence including potential camera shots were still being gathered by judicial police supported by gendarmes.

Other potential witnesses to the bar incident were also being interviewed, while the alleged victim was also being kept informed of developments.

McGregor is not considered a flight risk from the EU, and has pledged full cooperation with the French judicial authorities, said the source. 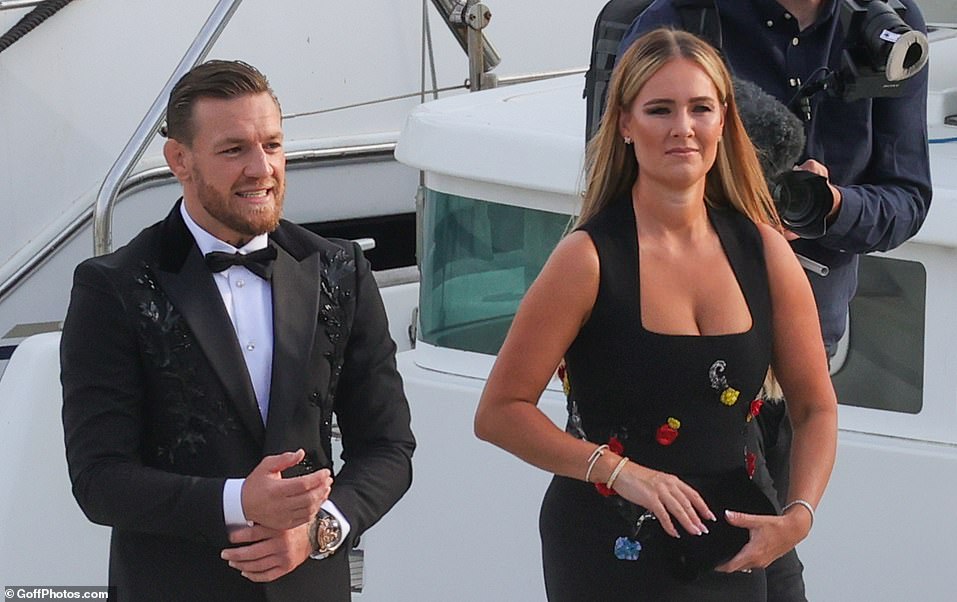 Before the Irishman’s arrest McGregor and his fiancee Dee Devlin (right) earlier enjoyed a night in Corsica, where they were seen on the port of Calvi, wearing a tuxedo and a Gala dress while being filmed and photographed staff 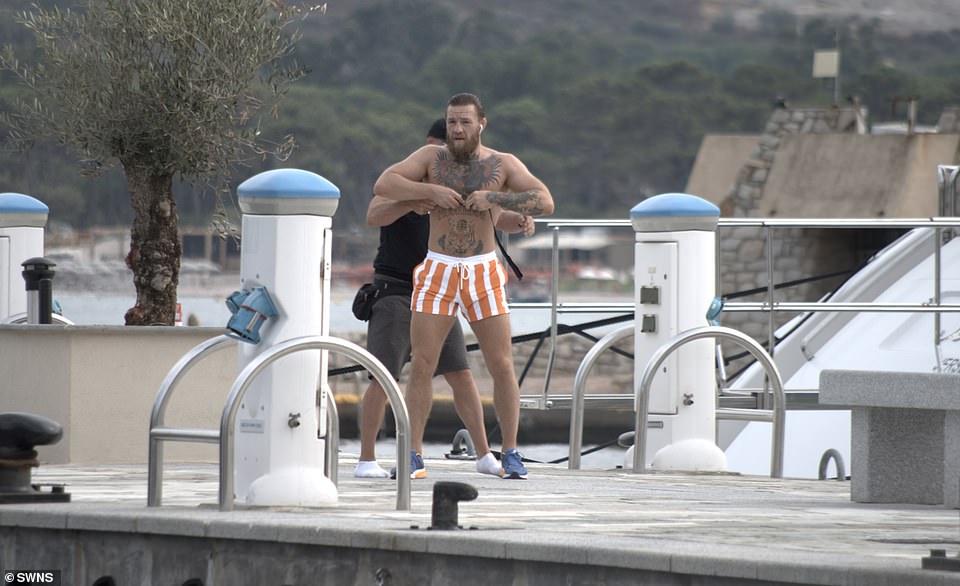 Conor McGregor, 32, works out on the dock in the Port of Calvi, Corsica. The Dubliner’s £3million yacht was raided last week over claims he’d exposed himself to a married woman and sexually assaulted her

A friend of the alleged victim told broadcaster France 3 Corse that McGregor ‘exhibited his private parts’ to the woman as she made her way to the toilets.

The MMA star’s lawyer Emmanuelle Ramon said the complaint against McGregor was ‘abusive’ and said the Irishman was freed before reaching the limit of police custody.

A spokesman for McGregor sent a statement from the United States saying he ‘vigorously denied any accusation of bad behaviour’.

On Saturday, the prosecutor’s office in Bastia issued a statement saying they had received a complaint ‘denouncing acts that could be described as attempted sexual assault and sexual exhibition’.

McGregor, known as Notorious, has been holidaying in the Mediterranean and was in Corsica preparing for a 110-mile water-bike relay race from Calvi to Monaco. 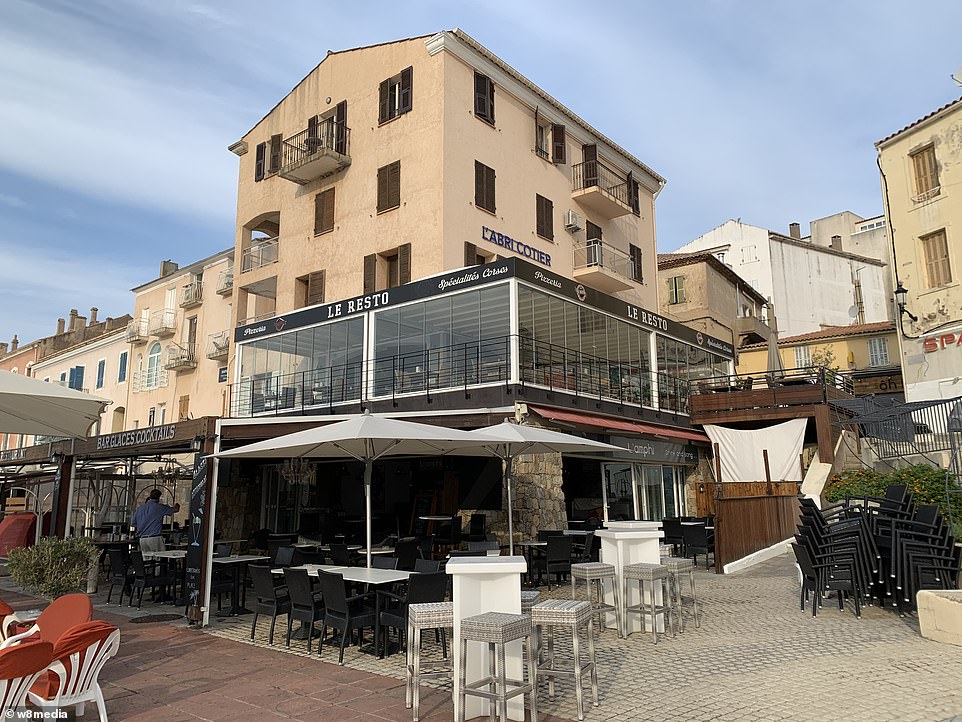 Pictured: This is the harbour side bar in Corsica where Conor McGregor allegedly exposed his manhood to a young married woman and sexually assaulted her. The bar sits below a restaurant called Le Resto 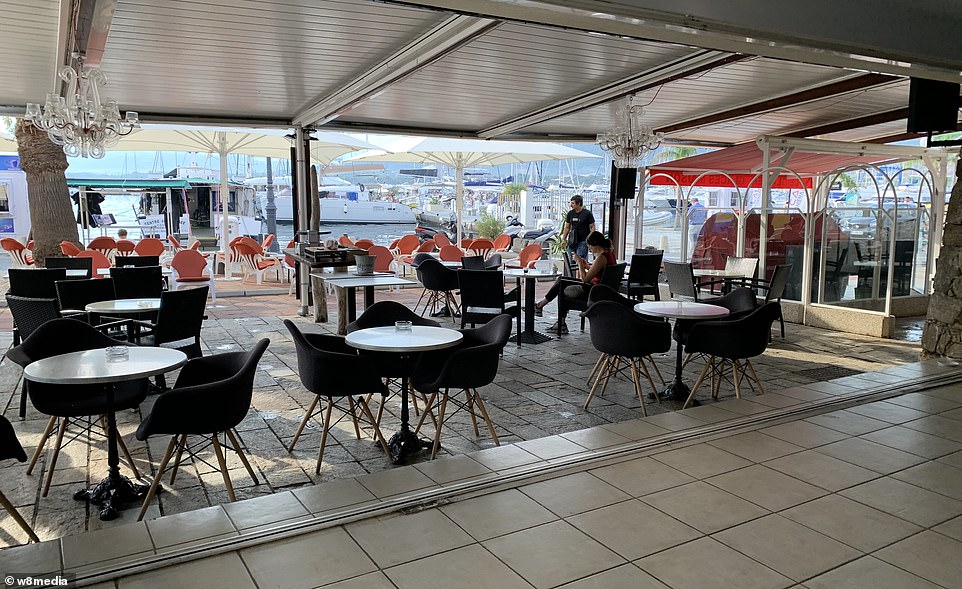 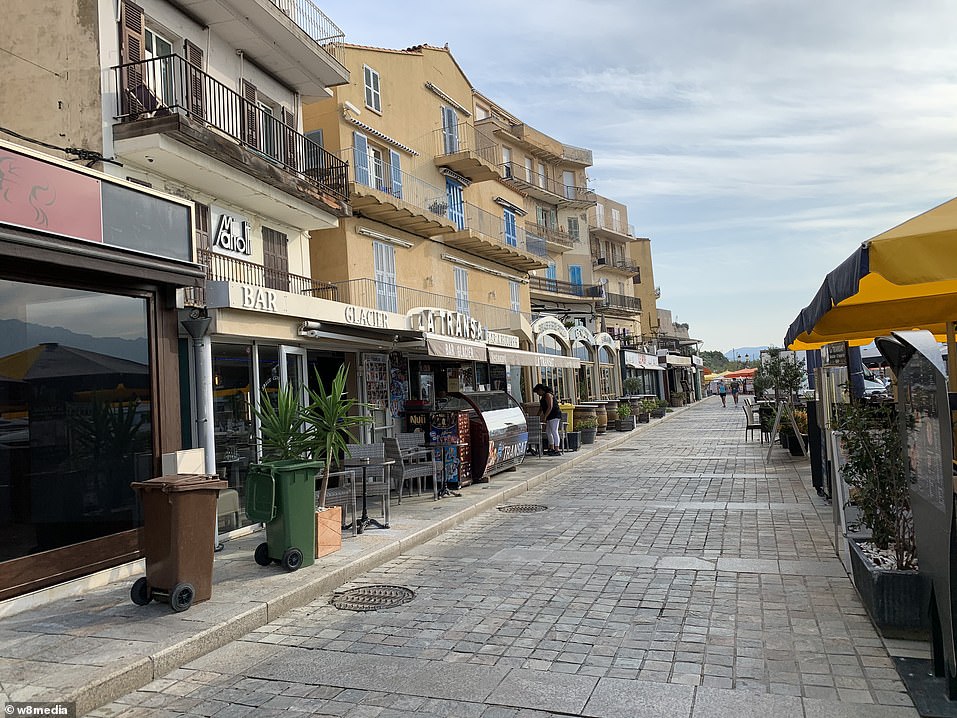 The popular port on the mountainous Mediterranean island has a strip of bars, all facing out towards the waterfront

He was leading a four-member Team Notorious against defending champions ‘Team Serenity’, headed by Princess Charlene of Monaco.

The event is designed to publicise the water safety initiatives of the Princess Charlene Foundation.

McGregor has been posting pictures on social media showing him cruising around the Mediterranean.

On Friday he complained that he had been visited by drug testers sent even though in June he announced his retirement for the third time, after twice returning to UFC.

McGregor is no stranger to controversy, having hit the headlines in 2019 for an attack on an older man in a Dublin bar captured in a viral video.

In 2018 he pleaded guilty in Brooklyn, New York to disorderly conduct after attacking a bus filled with UFC fighters.

McGregor held the UFC title for featherweights from 2015 to 2016 and lightweights from 2016 to 2018 and lost to American legend Floyd Mayweather in August 2017 in a lucrative boxing match.