Conor McGregor sucker-punched a grey-haired man in a Dublin pub after the patron refused to do a shot of whiskey with him, it has been revealed.

The ex-UFC champion was caught on CCTV in the Marble Arch pub in the Irish capital on April 6 pouring shots of his Proper Twelve whiskey – a brand which he founded and owns – for those sitting at the bar.

But after one man repeatedly rejected his offer, McGregor swung a vicious uppercut into the man’s face which caught him on the cheek, leaving onlookers stunned.

Despite being punched by one of MMA’s most high-profile fighters, the man remains on his stool as McGregor is dragged away.

The fight was reported to police at the time, but new details emerged after TMZ published footage of the altercation.

The newly-released CCTV shows McGregor walking into the pub wearing a tan top and large glasses before approaching the bar, where several men are sat drinking.

McGregor is then shown with a bottle of Famous Twelve whisky – a brand he founded and owns – in his hand, before placing a glass in front of one man.

The man angrily moves the glass out of the way, so McGregor places another glass in front of him, which he also removes.

Not to be deterred, the fighter then pours three shots of the whiskey and begins pumping his fist in the air, as others further down the bar cheer and clap.

Without warning, he then swings his fist into the man’s face, before being dragged outside by men who appear to be members of his own security team.

The incident was reported to police who opened an investigation, though it is not clear if that is still active. It is thought officers have seen the footage.

Reporting the attack back in April, the Irish Mirror quoted a witness who said: ‘McGregor was being a show off in the pub and one man didn’t like it and went up to have a word with him.

Another said: ‘There was a bit of a commotion, he [McGregor] was acting the mick and there was an incident.

‘There weren’t many people in the bar at the time, there was drink involved.’ 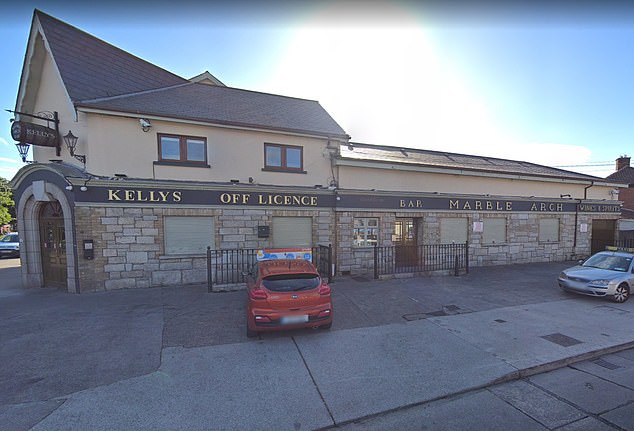 The attack was caught on CCTV in the Marble Arch pub (file image) in Dublin on April 6. Police opened an investigation, but it is not clear if the probe is still active

It is not the first time McGregor has been investigated for violence outside the octagon.

In March this year McGregor was arrested for robbery and criminal mischief in Miami after smashing a phone out of a fan’s hand and stamping on it when he tried to take a picture.

Charges were eventually dropped and McGregor settled a civil suit with the victim.

He was also charged with assault in New York in April 2018 after he threw a metal dolly through the window of a bus carrying rival UFC fighter Khabib Nurmagomedov and several other fighters.

McGregor was eventually allowed to plead no contest to a single charge of disorderly conduct.

He was ordered to perform five days of community service and attend anger management classes.