A conservationist has claimed that gorillas could catch coronavirus from humans and has called for ape tourism to be suspended.

Conservationist Ian Redmond says all great apes – including gorillas, chimpanzees and orangutans – could be at risk from the new coronavirus because they share between 97% and 99% of their DNA with humans.

For this reason he has called for great ape tourism to be suspended and field research to be reduced.

However, so far there have not been any suspected or confirmed cases of COVID-19 in apes.

Conservationist Ian Redmond says all great apes could be at risk from the new coronavirus because they share between 97% and 99% of their DNA with humans. Pictured: a mountain gorilla in Rwanda

It comes after a tiger at the Bronx Zoo in New York City tested positive for COVID-19 after apparent exposure to an infected worker.

‘Therefore the great apes are highly likely to be susceptible to the COVID-19 infection, and possibly with a higher mortality rate than among humans.’

He added that introducing new human diseases to great apes has the potential to be ‘catastrophic’.

Many ape tourism and research sites have already taken steps to reduce the risk of COVID-19 infection and visitors at centres in Indonesia and Uganda have been banned.

Gorillas in Rwanda, Uganda and the Democratic Republic of Congo have been ‘put on lockdown’ amid fears that they may be able to catch the disease. 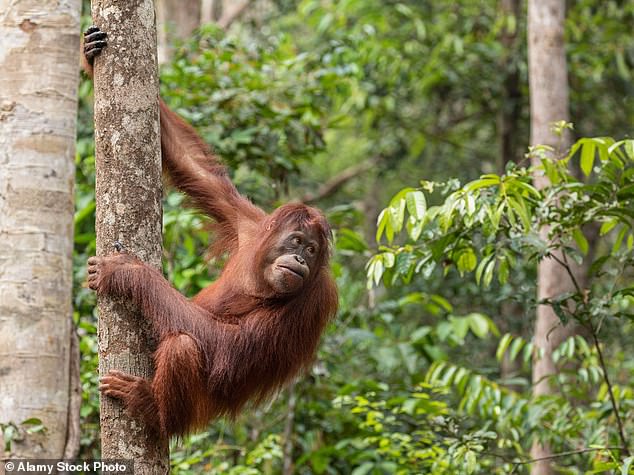 One conservationist has warned that introducing new human diseases to great apes has the potential to be ‘catastrophic’. Pictured: an orangutan in Borneo

Those working with apes are also adhering to an increase in the minimum distance they need to keep.

The International Union for the Conservation of Nature has called for people to stay at least 33 feet (10 metres) away from gorillas at all times — an increase on the usual recommended safety distance of 23 feet (7 metres).

Infectious diseases like Ebola and HIV are known to have been transmitted from animals to humans and extensive research has looked into how illnesses might be transferred the other way.

In 2012, a study found that 58% of chimpanzees at sanctuaries in Uganda and Zambia were carrying drug-resistant strains of staph, which can cause painful blisters on human skin.

Researchers said the infections may have been come from vets who worked with the chimpanzees.

In the final report, one ecologist concluded that novel pathogens from humans were ‘one of the biggest threats’ great apes faced.

A recent study demonstrated that cats and ferrets can be infected with coronavirus and spread it to other animals, but it is hard for dogs to catch the disease.

The findings came after four isolated cases of pets being infected with the novel coronavirus, including two dogs in Hong Kong and a cat in Belgium.

The second cat tested positive for the virus after its owner fell ill — unlike the Belgian cat, however, it is not exhibiting symptoms.

In all four cases, the pets are believed to have caught the virus from their humans.

The US Centers for Disease Control and Prevention has noted that there is no evidence to suggest that household pets are capable of spreading the disease.