Boris Johnson is facing a backlash from senior Tories today as government advice on working from home has still not changed.

The PM underlined a dramatic shift yesterday by urging people to return to their offices where it is safe in order to avert disaster for town and city centres.

Mr Johnson insisted it was time to return to normal as previously thriving business have seen custom dry up, with millions of workers logging on to do their jobs remotely during lockdown.

New forecasts from the government’s OBR watchdog underlined the scale of the threat, suggesting that four million people could be unemployed by next year as the hospitality and retail sectors battle to survive.

However, despite the entreaties the government’s own website still states that people should continue to ‘work from home if you can’.

Two senior members of the Conservative 1922 Committee added their voices to criticism this afternoon.

Chairman Sir Graham Brady told the Evening Standard: ‘It is high time the Government changes its advice to the public in order to encourage businesses to get back to work and get the economy moving again.

‘Responsible employers have been making necessary arrangements to ensure it is safe for people to get back to their workplaces.’

Sir Charles Walker, the committee’s vice chair, added: ‘If you want to save the economy, it is your national duty to get back to work and to support our town centres.’

The government’s online guidance states: ‘If you can do your job from home you should continue to do so, but you and your employer should discuss and agree working arrangements to best suit the needs of the business.’

Downing Street insisted yesterday that the advice does not need to change, as it encourages people to discuss the situation with their firms.

Some companies, including accountancy giant Deloitte and law firm Slaughter and May, have allowed employees back but others have been reluctant to act.

Even those that are getting staff to return say they will still only be at less than half-capacity to obey social distancing guidelines.

The Government has recently relaxed the rules to ‘one-metre plus’, but HR chiefs and management insist on following the best practice of two metres.

The lack of numbers in the offices spell disaster for High Street shops, which are already on their knees after buyers stayed away during the pandemic. 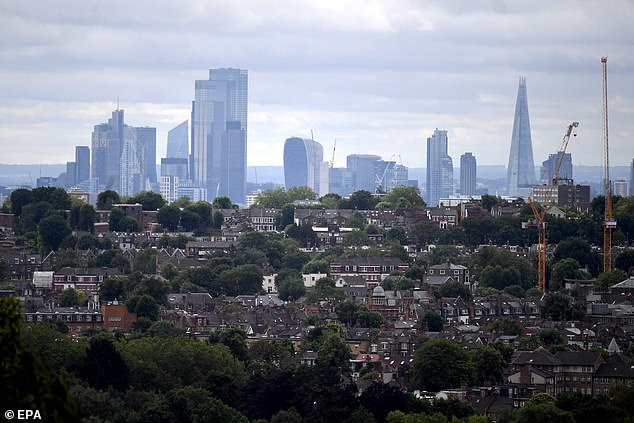 Mr Johnson has been urging people to return to their offices where it is safe to do so in order to avert disaster for town and city centres. Pictured, London

Other smaller businesses including cafes and restaurants, are also set to find themselves starved of customers due to the lack of footfall from office blocks.

‘I think that’s got to be the key thing. Where businesses have made a huge effort to make the workplace safe I do think people should start to think about getting back to work but provided we all continue to follow the precautions.’